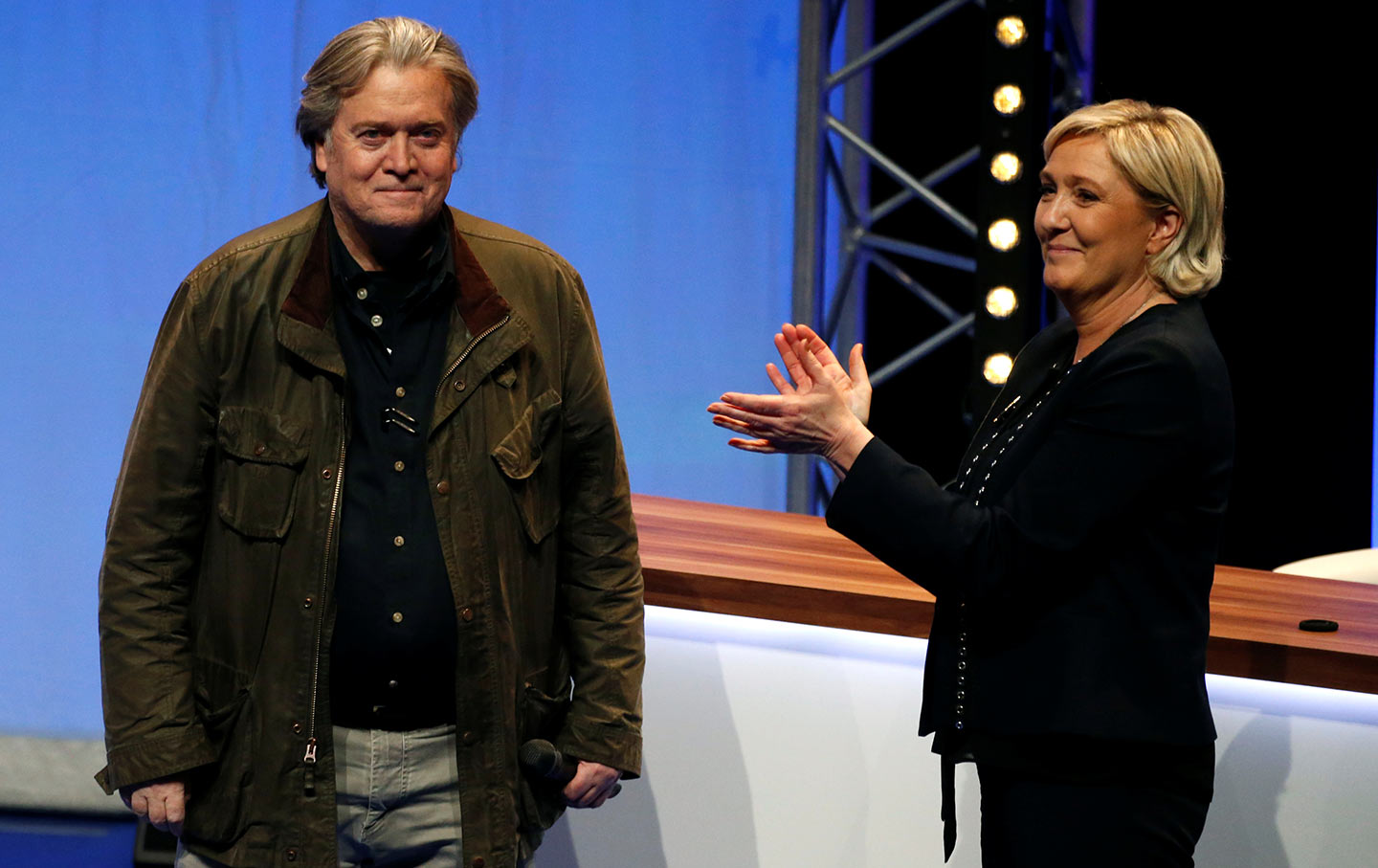 Last September, Steve Bannon told 60 Minutes, “There’s nothing to the Russia investigation.” Trump, who has grudgingly admitted that Russia might have meddled in the 2016 US elections, also suggests the culprit may have been “a 400 pound genius sitting in bed and playing with his computer.” And Vladimir Putin, in his recent interview with Megyn Kelly, called the whole thing “nonsense,” “ridiculous,” and told her, “Sometimes I think you are joking.” For good measure, Putin came up with an even more offensive version of who those 13 Russians indicted by Russiagate special counsel Robert Mueller might be. “Maybe they were not even Russians, but Ukrainians, Tatars, or Jews, but with Russian citizenship,” he told Kelly, with a smirk.

But if Bannon, Trump, and Putin all agree that Russiagate is fake news, they have something else in common too: Trump’s far-right nationalism, Europe’s growing, proto-fascist nativism, and Russia’s own traditionalist, Orthodox Church–based version of nationalism, are converging—and there’s evidence they are increasingly working together, or at least in parallel. Over the past week, Bannon toured Western Europe, dispensing his rough-edged benediction on Italy’s far right. He spoke at a rally for France’s fascist-tinged National Front (“let them call you racist…wear it as a badge of honor”). He met with a leader of Germany’s far-right Alternative for Germany (AfD). And he praised Hungary’s Viktor Orbán (“a real patriot and a real hero”), whose fascist-leaning, Islamophobic ruling Fidesz party leans toward Putin. Next door, the far-right Freedom Party of Austria has established a five-year cooperation agreement with Putin’s United Russia party.

Indeed, many of these Euro-rightists applaud Russia, whose leaders have reportedly returned their approval. And it’s worth remembering that for years Bannon has also looked favorably on Russia, not least because he apparently believes that Trump’s America and Putin’s Russia are Christian allies against the Muslim world. Bannon sees Russia as the bastion of something not too far removed from the Catholic-inspired right-wing nationalism that he himself espouses. In a 2014 speech at an event hosted by the Human Dignity Institute at the Vatican—whose text was published by Buzzfeed—Bannon went on a some length explaining the nature of his attraction to Putin’s Russia. “Vladimir Putin, when you really look at some of the underpinnings of some of his beliefs today, a lot of those come from what I call Eurasianism; he’s got an adviser who harkens back to Julius Evola and writers of the early 20th century who are really the supporters of what’s called the traditionalist movement, which really eventually metastasized into Italian fascism,” said Bannon.

“We the Judeo-Christian West really have to look at what [Putin is] talking about as far as traditionalism goes.” —Steve Bannon

“A lot of people that are traditionalists are attracted to that,” added Bannon. “One of the reasons is that they believe that at least Putin is standing up for traditional institutions, and he’s trying to do it in a form of nationalism—and I think that people, particularly in certain countries, want to see the sovereignty for their country, they want to see nationalism for their country. They don’t believe in this kind of pan-European Union or they don’t believe in the centralized government in the United States.” Bannon’s conclusion? “We the Judeo-Christian West really have to look at what he’s talking about as far as traditionalism goes.”

In his book Devil’s Bargain, journalist Joshua Green has reported at length on Bannon’s attraction to “Eurasianism” and Putin-style nationalism. In an interview, Bannon told Green that both Putin and China’s Xi Jinping are nationalists, akin to the rising wave of ultranationalists in Western Europe, including Britain’s Nigel Farage, France’s Marine Le Pen, Hungary’s Orbán, and Poland’s right-wing nationalists. (Both Farage, the former leader of the UK Independence Party, and Marion Maréchal-Le Pen, niece of Marine and granddaughter of the National Front’s pro-Nazi founder, Jean-Marie Le Pen, made appearances at the Conservative Political Action Conference in February.)

Will Mueller Indict Russians Over the DNC Hacking Next?

The Russiagate Intelligence Wars: What We Do and Don’t Know

Trump’s All-Out Attack on the Rule of Law

There’s an intellectual and theoretical basis for Bannon’s affinity for Russia and for Europe’s far right. As Green recounts, Bannon has long been enthralled by René Guénon, an early-20th-century proponent of one of fascism’s root ideologies, Traditionalism. One of those influenced by Guénon’s theorizing was Julius Evola, a sometime ally of Mussolini’s and a man who was cited by Bannon in the Vatican speech released by Buzzfeed. Evola is a favored inspiration for none other than Alexander Dugin, one of the leaders of the so-called Eurasianism movement. Dugin—who was once described, not unfavorably, as “Putin’s Rasputin” by Breitbart, when it was still run by Bannon—is a fascist-leaning Russian ultra-nationalist who maintains close ties to many organizers of Europe’s far right. Though both Putin and his spokesman, Dmitri Peskov, have kept Dugin at arm’s length, rejecting assertions that he advises or influences the Russian president, Dugin remains a strong supporter of Putin and of Russia’s interventions in Ukraine, Georgia, and elsewhere. And, according to Bloomberg, Dugin called the inauguration of Trump “incredibly beautiful, one of the best moments of my life.”

To be sure, this is unlikely grist for the mill being churned by special counsel Mueller, since Mueller is required to stick to the law, not politics. The legal questions he’s looking at are immense in their own right: Did the Russian state intervene in America’s 2016 vote? If so, did the Trump campaign cooperate with Russia? And, since taking office, has the president tried to obstruct the investigation? But those questions leave aside an underlying political question: What are the points of political accord between Trump and Putin, if any? Quite properly, Mueller hasn’t, and shouldn’t, probe the motivation for Putin’s alleged favoring of Trump in 2016, nor should he look at Trump’s own apparent political attraction to Putin’s version of authoritarianism.

First, what does he know about financial misdeeds and money laundering by Trump, Jared Kushner, et al. during their years of dealing with Russia? (In Michael Wolff’s Fire and Fury, Bannon was quoted as saying about Mueller, “You realize where this is going.… This is all about money laundering.”)

Second, what does Bannon know about the circumstances surrounding the June 2016 meeting in Trump Tower involving Kushner, Donald Trump Jr., and Paul Manafort with a delegation of Russians? Bannon is on record in Fire and Fury saying that there’s no way that Trump didn’t himself meet with the Russians that day.

Third, what does Bannon know about the role of Erik Prince, brother of Education Secretary Betsy DeVos and purveyor of mercenary armies, and his Russia connections? Prince, a Bannon ally, took part in a pair of meetings being scrutinized by Mueller. One involved Kushner, Gen. Michael Flynn, and Mohammed bin Zayed al-Nahyan (aka MBZ), the crown prince of Abu Dhabi and de facto ruler of the United Arab Emirates, who held a meeting in Trump Tower in December 2016, a meeting also attended by Bannon. For the second, a month later, Prince flew halfway around the world for a meeting in the Seychelles, an Indian Ocean archipelago, where he met Kirill Dmitriev, a senior Russian financier, at the behest of MBZ.

Fourth, what does Bannon know about the role of Cambridge Analytica, the high-powered data firm that he once partly owned, in the Russiagate story? Some suspect that CA may have aided the Russians in targeting US voters, and its CEO, Alexander Nix, contacted WikiLeaks in June 2016 to ask them if they had information about Hillary Clinton’s missing e-mails.

At the White House’s urging, Bannon has stonewalled questions from the House Permanent Select Committee on Intelligence, invoking “executive privilege.” However, when Bannon spent two days testifying in front of Mueller’s team, executive privilege didn’t apply, though it isn’t known what topics Bannon’s appearance covered. Ultimately, in questioning Bannon, who served as Trump’s consigliere during the latter months of the campaign and then, for seven months, as the White House’s “chief strategist,” Mueller might help the rest of us figure out whether Bannon served as a missing link between Trump and the Russian president in 2016. And, though Mueller won’t ask about politics directly, he might ultimately help us understand whether or not Bannon’s version of populist nationalism is part of what made Putin look with favor on Trump’s right-populist campaign.