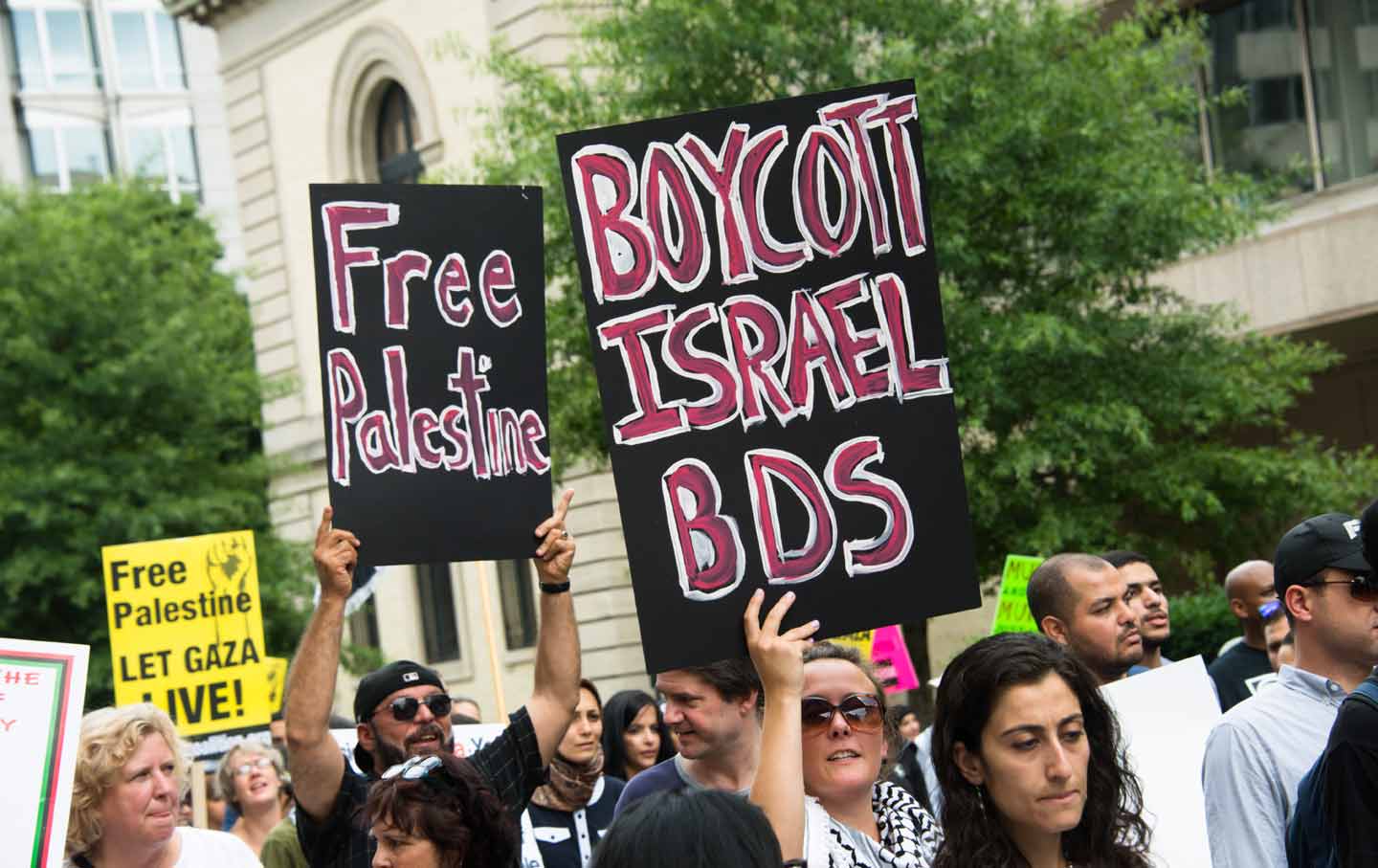 New York lawmakers, seemingly baffled by the global boycott, divestment, and sanctions (BDS) campaign for Palestinian freedom, are despairing for the good old days of McCarthyism, when speech was suppressed and activists’ livelihoods endangered with the simple creation of a blacklist.

In January, the New York State Senate overwhelmingly voted to resurrect McCarthyism by passing a bill aimed at suppressing BDS in the United States and abroad. The bill proposes prohibiting the state from contracting with or investing in individuals, companies, and organizations that abide by boycott campaigns related to Israel’s abuses of Palestinian rights and violations of international law (including in the occupied territories). While the bill targets boycotts against a broader list of “allied nations,” it is clear from the official memo accompanying the bill and from lawmakers’ public comments that the bill’s true target is BDS.

The blacklisting police will be back—tucked away in some state building in Albany no doubt—monitoring our #BDS tweets.

If passed by the New York State Assembly and signed into law by Governor Cuomo, this bill would also require New York State to create and maintain an online list of human-rights activists, organizations, and companies that engage in, promote, or encourage others to support BDS. “Such list, when developed and published,” the text of the bill states, “shall be posted on the website of the office of general services.” The blacklisting police will be back—tucked away in some state building in Albany no doubt—monitoring our #BDS tweets.

New York is not alone. A wave of anti-BDS legislation has been introduced, and in some cases passed, in Congress and in state legislatures across the country, including Illinois, Florida, Pennsylvania, California, Indiana, and Virginia.

For nearly half a century, Palestinians in the occupied territories have lived under a repressive and discriminatory Israeli military regime that denies them the most basic of rights, including the right to self-determination, the right to move freely in their own land, and the fundamental right to due process. At the same time, there are now approximately 650,000 Jewish-Israeli settlers living on occupied Palestinian land in the West Bank, in violation of international law and official US policy, and despite near universal international condemnation. These settlers enjoy full rights of Israeli citizenship, while Palestinians living nearby are ruled by what amounts to an Israeli military dictatorship. The relentless expansion of Israel’s settlement enterprise and the massive apartheid wall Israel has been erecting on Palestinian land have exposed the Israeli leadership’s disdain for a two-state solution.

Meanwhile, Palestinian citizens of Israel—those who remained in what became Israel following the Nakba, or “catastrophe,” when approximately 750,000 Palestinians were uprooted or expelled from their homes in order to establish a Jewish-majority state in 1948—suffer from widespread, systematic and institutionalized discrimination. And millions of Palestinian refugees and their descendants—many still living in refugee camps today—are denied the right to return, a right guaranteed under international law.

Despite abundant and repeated condemnation of Israeli policies by the United Nations and virtually every major human-rights organization in the world, the global community has failed to achieve a just resolution for Palestinians or to hold Israel accountable and enforce compliance with international law.

Because of this, in 2005 a broad coalition of Palestinian labor unions, student and women’s groups, political parties, and other organizations called upon people of conscience throughout the world to support a grassroots campaign to boycott and divest from companies and institutions that profit from and perpetuate Israel’s abuses of their human rights, and to demand sanctions against Israel until Palestinian rights are recognized in full with an end to the occupation, equal rights for Palestinian citizens of Israel, and the right of return assured for Palestinian refugees. BDS, inspired by the US civil rights movement and the struggle against apartheid in South Africa, seeks to use peaceful tactics to secure Palestinian rights and freedom.

BDS is gaining momentum on campuses and in communities across the United States, with alliances strengthening at the grassroots level between Palestinian human rights activists and the labor, racial-justice, immigrant-rights, faith-based, and LGBTQ liberation movements.

Alarmed by these developments, Israel’s fiercest advocates have been attempting to use legal and other means to suppress BDS. Instead of engaging in a debate about BDS on its merits, these groups are effectively seeking to silence criticism of Israel and maintain the status quo. If there is no open, honest discussion of BDS and Palestinian freedom and human rights, then US public opinion won’t shift on the issue. And if public opinion doesn’t shift, then no one will challenge the fact that the United States enables the occupation of Palestine, in part by sending over $3 billion in military aid—an amount soon to rise—to Israel each year to maintain it. For Israel, the status quo is a pretty good deal.

But public opinion in the United States is shifting away from Israel, particularly among young people, liberals and progressives, and people of color. More and more Americans are fed up with the status quo and unconditional US support for Israel, and are looking for alternative ways like BDS to end the conflict. A November 2015 poll found that 49 percent of Democrats support either imposing economic sanctions or engaging in some other form of action against Israel over settlement construction, while a November 2014 poll found that 39 percent of all Americans felt the same. And it’s not just the grassroots of the Democratic Party that’s changing. According to a July 2015 poll conducted by Frank Luntz, 31 percent of Democratic Party “opinion elites” said they supported BDS when it was explained to them. Even Republicans are far less supportive of Israel than conventional wisdom holds. According to the same November 2015 poll, just 45 percent of Republicans want the United States to take Israel’s side diplomatically in its conflict with the Palestinians, with that number dropping to 36 percent when Evangelical voters are omitted.

Faced with this reality, Israel advocacy groups have been doubling down to crush BDS. My organization, Palestine Legal, documents the attempted suppression of Americans working for Palestinian human rights. In 2015, we responded to 240 incidents of suppression, which included baseless legal complaints, administrative disciplinary action in the university context, and false accusations intended to malign those who support Palestinian rights.

Backed by the likes of billionaires Haim Saban and casino mogul Sheldon Adelson, anti-BDS groups are pouring tens of millions of dollars into efforts to silence speech critical of Israel and to quash Palestine human-rights activism in the United States. Adelson and Saban, heavy political contributors to Republicans and Democrats, respectively (Saban is a major funder of Hillary Clinton), are likely well aware that in the past year at least two dozen pieces of legislation aimed at punishing those who support BDS have been introduced in legislatures across the country.

Instead of protecting civil and human rights, elected officials in Albany are taking steps to blacklist human rights activists.

There’s just one problem: The Supreme Court has long held that advocating for boycotts to bring about political, social, and economic change—like BDS—is protected by the First Amendment. Passing a law that penalizes or chills our First Amendment right would violate constitutional protections.

Apparently that doesn’t matter to New York state senators, the vast majority of whom voted to pass the anti-boycott blacklisting bill. By doing so, those state senators sent a clear message: shielding Israel from accountability for its human-rights abuses is more important than protecting basic rights afforded to Americans by the US Constitution, let alone the rights of Palestinians. (Kudos to the six black and Latino lawmakers who did the right thing by voting against the bill.)

Fortunately, the strategy of shutting down speech critical of Israeli human-rights abuses, while perhaps effective in state legislatures and university administration buildings, cannot and will not stop BDS.

Student bodies at more than 25 colleges and universities have passed resolutions calling for divestment from Israeli and other companies that profit from Israel’s denial of Palestinian freedom and rights. Religious institutions including the Presbyterian Church (USA) and the United Church of Christ have voted to divest from corporations implicated in supporting Israel’s occupation, and the United Methodist Church divested its pension fund from several Israeli banks over their ties to settlements. Human Rights Watch recently released a report urging businesses to cease operations in settlements.

All of these groups and the individuals involved would be blacklisted under the New York bill; they would be added to the public roster of “persons…that have engaged in the boycotting of [an] allied nation. So would prominent human rights activists, artists, and academics around the world, including Archbishop Emeritus Desmond Tutu, Alice Walker, and Roger Waters. Many readers of The Nation would be blacklisted too.

Instead of protecting and advancing civil and human rights, our elected officials in Albany and around the country are taking steps to punish First Amendment–protected activity and blacklist human-rights activists. The lawmakers who support these bills are not only out of touch with the growing numbers of Americans who support BDS, they are also out of touch with the US Constitution and the growing chorus of voices around the world calling to uphold fundamental Palestinian rights.