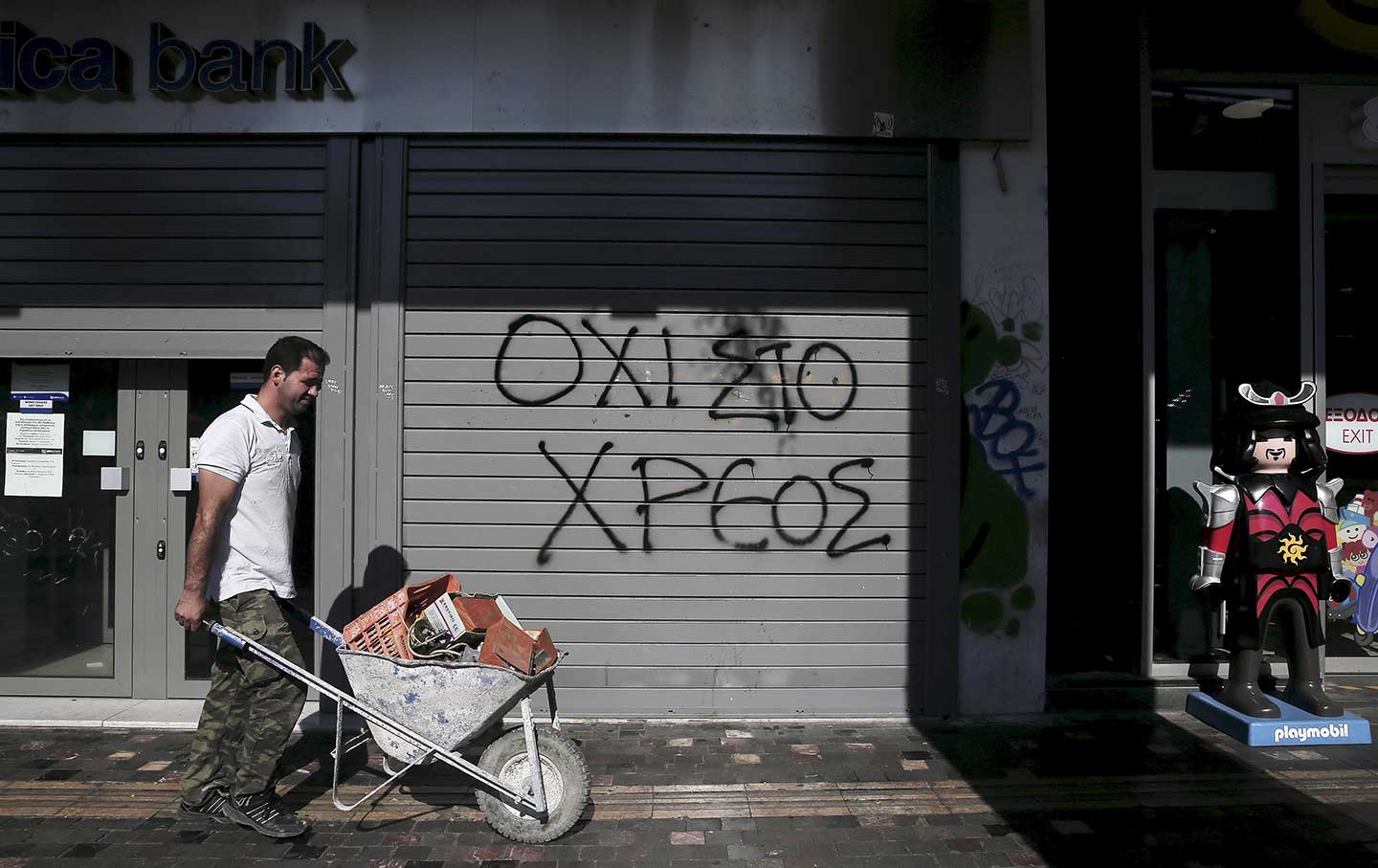 Graffiti on a closed Attica Bank branch reads, “No to the debt,” in Athens, Greece. (Reuters / Alkis Konstantinidis)

Chicago is, among many other things, the home of what is, for better or worse, arguably the most influential school of economics of the past half-century, the eponymous Chicago school, which takes its name from the University of Chicago, where the likes of Milton Friedman, Friedrich von Hayek, Eugene Fama, Myron Scholes, and scores of other luminaries of laissez-faire theory hung their hats at one time or another.

So it came as something of a surprise whe, on Friday night, the former finance minister of Greece, the avowedly leftist Yanis Varoufakis, received an enthusiastic welcome from a large gathering in the heart of Chicago’s financial district, where he was promoting his new book, And The Weak Suffer What They Must? (Nation Books). The title comes, of course, from Thucydides, and is a ringing denunciation of the harm neoliberal austerity measures have had on poor and working-class people since the start of the Eurozone crisis.

Varoufakis is something of a folk hero among the growing ranks of anti-austerians in Europe and the United States, who rightly believe that the eurozone’s (or, more to the point, Germany’s) obsession with balancing budgets by slashing rates of government expenditure has only served to deepen the debt crisis that has roiled global markets, impoverished millions, and strained intra-European relations since 2009.

To appreciate Varoufakis’s role in the fight against austerity measures, some history of the Greek debt crisis is in order. Between 2001, when Greece adopted the euro, and the 2009 debt crisis, successive Greek governments recklessly borrowed $430 billion from European banks, who recklessly lent it. In what in reality was an effort to shore up European banks, a “troika” consisting of the European Commission, the International Monetary Fund, and the European Central Bank agreed to “bail out” Greece. In 2010 the troika lent Greece $146 billion; in 2012 it lent a further $173 billion. These loans came loaded with requirements that Greece cut public expenditures; the 2012 bailout went so far as to demand Greece reach a 4.5 percent budget surplus.

The results were all too predictable. Between 2010 and 2015 unemployment hit 25 percent; Greek GDP fell by one-quarter; the rates of homelessness and suicide have soared; while youth unemployment now approaches 60 percent. The economic collapse paved the way for the victory of the left anti-austerity party Syriza, which assumed power in January 2015. The largest vote-getter in that election became the country’s new finance minister: Yanis Varoufakis.

He resigned five months later. In Chicago, he recounted his turbulent tenure, during which he attempted, unsuccessfully, to renegotiate the terms of the prior bailouts. The villain of the piece, as told by Varoufakis, is German Finance Minister Wolfgang Schäuble, who informed his Greek counterpart at their first meeting that “elections change nothing.”

Varoufakis then recalled confronting Schäuble at a meeting in which he was being pressured to sign onto yet another bailout-cum-austerity package, which Varoufakis sardonically refers to as “extend and pretend” agreements. Varoufakis asked Schäuble, If he were in Varoufakis’s shoes, would he sign such an agreement? According to Varoufakis, Schäuble admitted, “As a patriot, I wouldn’t.”

In July 2015 the Greek public—following Varoufakis’s lead—voted overwhelming against accepting the terms of a third bailout. Nevertheless, Varoufakis tendered his resignation, as Greek Prime Minister Alexis Tsipras went ahead and signed a new deal with the troika anyway. At the time, Paul Krugman characterized the terms of the third bailout package thusly: “This goes beyond harsh into pure vindictiveness, complete destruction of national sovereignty, and no hope of relief. It is, presumably, meant to be an offer Greece can’t accept; but even so, it’s a grotesque betrayal of everything the European project was supposed to stand for.”

Varoufakis sees parallels between the situation of Greece today and the one faced by the United States in 1929. Then, the Hoover administration’s austerity measures pushed the US “into a trap” that it was not able to extricate itself from until well after Franklin Roosevelt’s innovations began to bear fruit. Similarly, today, Greece is being forced to accept austerity measures that decimates its tax base, making it virtually impossible for it to service payments on its debt.

Varoufakis warns that EU-imposed austerity measures may force a “Grexit,” which may hasten the collapse of the EU. This would almost certainly mean the return of geopolitics within the European space along the line of the interwar years (1919–39).

To prevent such a dire outcome, Varoufakis has undertaken the perhaps Sisyphean task of fashioning a more democratic alternative to the EU. The Democracy in Europe Movement 2025 (DiEM25), which he helped to found, will seek as its goal the democratization of the EU, demanding full transparency in decision making and an end to crippling austerity measures. Writing in The Guardian recently, Varoufakis admitted that the “project is utopian, even to us.” Yet it is motivated by the all-too-real fear that, in the absence of greater accountability, the EU will likely “disintegrate at a terrible cost to all.”

And, as Varoufakis clearly recognizes, the disintegration of the EU is a prospect no one in the West should welcome.