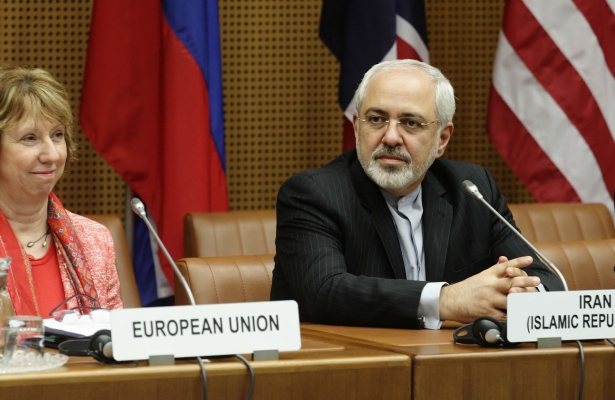 Reading through the comments of various State Department officials leading the US delegation in the P5+1 talks with Iran—the latest round concluding last week and the next one scheduled for June 16–20—it’s hard not to detect a creeping pessimism. But it’s wrong to conclude that the talks—which last week included a three-hour bilateral meeting between the United States and Iran—won’t be successful, if not by the self-imposed deadline of July 20 then after the six-month extension that has been built into the framework of the negotiations. What’s needed most of all is patience, along with efforts to beat back the naysayers, the hawks and neoconservatives, the Israel lobby and its allies, and others, including the wrecking balls in Congress.

Iran’s Foreign Minister Javad Zarif said, after the latest round: “Agreement is possible. But illusions need to go. Opportunity shouldn’t be missed again.”

“This was the ‘sticker shock’ meeting,” a former senior U.S. official, speaking not for attribution, told Al-Monitor Friday.

“Significant differences remain on how many centrifuges Iran should be permitted to have to meet ‘practical needs’ for nuclear energy and research, as well as significant differences on the length of the agreement and the pace and scope of sanctions relief accompanying a final deal,” the former U.S. official said. “Other areas, like the possible military dimensions of past Iranian nuclear research, are also tricky.”

“So, instead of papering over these differences in a post-meeting statement, the negotiators apparently felt that they had to return to their capitals to consult with national leaders about how they might overcome them,” the former US official suggested. “It remains to be seen if that is possible, but both sides still appear committed to overcoming the nuclear crisis.”

Speaking to reporters last week via teleconference, a senior State Department official (who wouldn’t allow her name to be used) said:

The discussions this week have been useful, but they’ve also been at times difficult, which they knew—we knew they would be. We’ve said this repeatedly throughout this process, that this would be difficult. We are just at the beginning of the drafting process, and we have a significant way to go. There are significant gaps. These are complicated issues. As we’ve said, if this were easy to solve, it would have been done a long time ago.

This has, candidly, been a very slow and difficult process, and we are concerned with the short amount of time that is left. But let me be very clear: We believe we can still get it done. It’s important to remember that we’re at the beginning, and the parties are all at the table talking in a serious way. But we do not know yet, as we’ve always said, if we will be able at the end of this to conclude a comprehensive agreement.

In any negotiation there are good days and bad days, and there are ups and downs. This has been a moment of great difficulty, but one that was not entirely unexpected.

Until now, there was plenty of optimism about the current round of talks, and it still seems likely that a deal will be struck, despite the difficulties outlined by the American delegation. They’re getting down to the nitty-gritty of the particulars, attempting to write—paragraph by paragraph—a detailed accord that deals with a wide range of issues. And both sides agree that there will be no deal until every issue, big and small, is settled—in other words, there won’t be any partial agreements. The biggest sticking point appears to be exactly how big Iran’s enrichment program will be as part of a final accord; that is, how many centrifuges Iran will be able to spin, and what kind, and producing how much low-enriched (i.e., not weapons grade or anything close) uranium, for civilian purposes. (There are plenty of other issues, too, of course, including Iran’s heavy-water Arak reactor, its missile and related military programs, and plenty more.) The American side seems fixed on the idea of preventing Iran from quickly moving toward “breakout,” that is, an ability to produce a nuclear weapon quickly, or relatively quickly—it could still take years!—after an accord is reached. But as Jim Walsh, an MIT professor and arms control expert who’s long been involved in the Iran issue, said in response to last week’s talks:

I think most discussion in the U.S. of the size—what’s required, what’s the minimum and maximum size, number of centrifuges, separated work units, however you measure it—much of that debate has been framed by the question of breakout. And I’ve been rather troubled by our discussion of it. Breakout is an important issue, every agreement should be assessed in terms of looking at the risk of breakout, but breakout is only one issue in many issues, and much of the discussion of breakout seems pretty flawed and ahistorical.

As Walsh points out, “breakout” means—at least in the US view—the ability of Iran to cobble together enough highly enriched material for a single bomb, leaving aside whether or not Iran could manufacture a weapon and the means to deliver it, both challenging projects. (So far, Iran has none of that: no weapons-grade uranium, no warhead, no ability to deliver one.) As Walsh puts it:

Breakout is extremely rare in the international system and it’s a definition that itself is flawed. There’s no country that I know of, as someone who studies nuclear decision-making, there’s no country in the history of the nuclear age that has broken out with the purpose of developing one bomb’s worth of material. … Does Iran look like a good candidate for breakout, when you look at its past deceptions and the history of the program, does it look like a good candidate? And I think the answer is: not really.

The hawkish Washington Post, in an editorial, luxuriates in its pessimism. The Post seemed almost gleeful in proclaiming that President Hassan Rouhani of Iran needs a deal desperately, suggesting that President Obama can afford to delay the talks, even adding another six months onto the negotiations, in order to up the pressure on Rouhani. Says the Post:

Whether that discrepancy can be used to leverage the major concessions Iran must make for a workable agreement is anyone’s guess—though this week’s talks were a bad omen. A senior U.S. official said “we do not know if Iran will be able to make the tough decisions they must.” Chief among those is steps that would make it impossible to produce the material for a bomb in less than “six months to a year,” a time frame mentioned by Secretary of State John F. Kerry in recent testimony to Congress.

And the Post adds that members of Congress opposed to a deal can work alongside the influence of the hardline Revolutionary Guard in Iran to block an agreement:

In the end there will be a strong check on any concessions made by the Obama administration: If Congress or Israel are dissatisfied, they may be able to scuttle the deal. Iranian hardliners will have a say, as well. Considering the challenge of constructing a compromise that satisfies the Revolutionary Guard and Republican senators, it’s no wonder that optimism seems out of place.

That’s a kind of brinkmanship that’s inappropriate in international diplomacy, and the Post almost seems eager for the talks to fail.

Another sticking point is the web of economic sanctions that have been imposed on Iran. Supporters of sanctions labor under the illusion that the hardships they impose on Iran’s economy will compel Iran to make a deal that erases its basic national interests, including what Tehran says is its fundamental right to enrich uranium on its own soil. Yes, the sanctions create an incentive for Iran to talk—but they won’t force Iran to make a deal that goes against that bottom line, and in any case no Iranian leader could surrender that and survive politically. Unfortunately, in its public pronouncements so far the United States has been unwilling to say much about how the sanctions might be reduced, waived and eventually lifted as part of a deal—or how long it might take.

As Trita Parsi, head of the National Iranian American Council (NIAC), put it in a teleconference last week:

On the Iranian side, Rouhani has essentially—I don’t want to use the word gambled—but the negotiations over the nuclear issue are the core issue of his entire presidency. If this fails, and if it fails because there is a perception in the international community that Iran cannot live up to the agreement, that it wasn’t flexible enough, then that will be the end of Rouhani’s presidency as a capable and influential president.…

And this is where I think one of the problems with sanctions relief is coming in, in the sense that so far the Iranians have either not received the sanctions relief in practical terms that they were promised or it’s essentially come way too late, which is largely an issue of the function of the fact that the sanctions regime has intimidated banks from partaking in any transactions with Iran, even permissible transactions.… If this psychological sanctions war is not starting to fall apart or be reduced to the degree and at the pace that the administration would like, and the Iranians are not receiving the benefits of a deal faster than they are right now, then I would start getting worried that the political insulation of the negotiations that has existed on the Iranian side would start to disintegrate, and that could be very bad. It would essentially mean that the U.S. side would no longer know that they are negotiating with a team that can deliver.

The Iranian side, too, expressed disappointment with the latest round of talks, according to AFP:

A source close to the Iranian delegation in Vienna was quoted by the IRNA news agency as saying that “the West has to abandon its excessive demands.”

“We had expected the Western side to become more realistic but this doesn’t appear to be the case yet,” the source added.