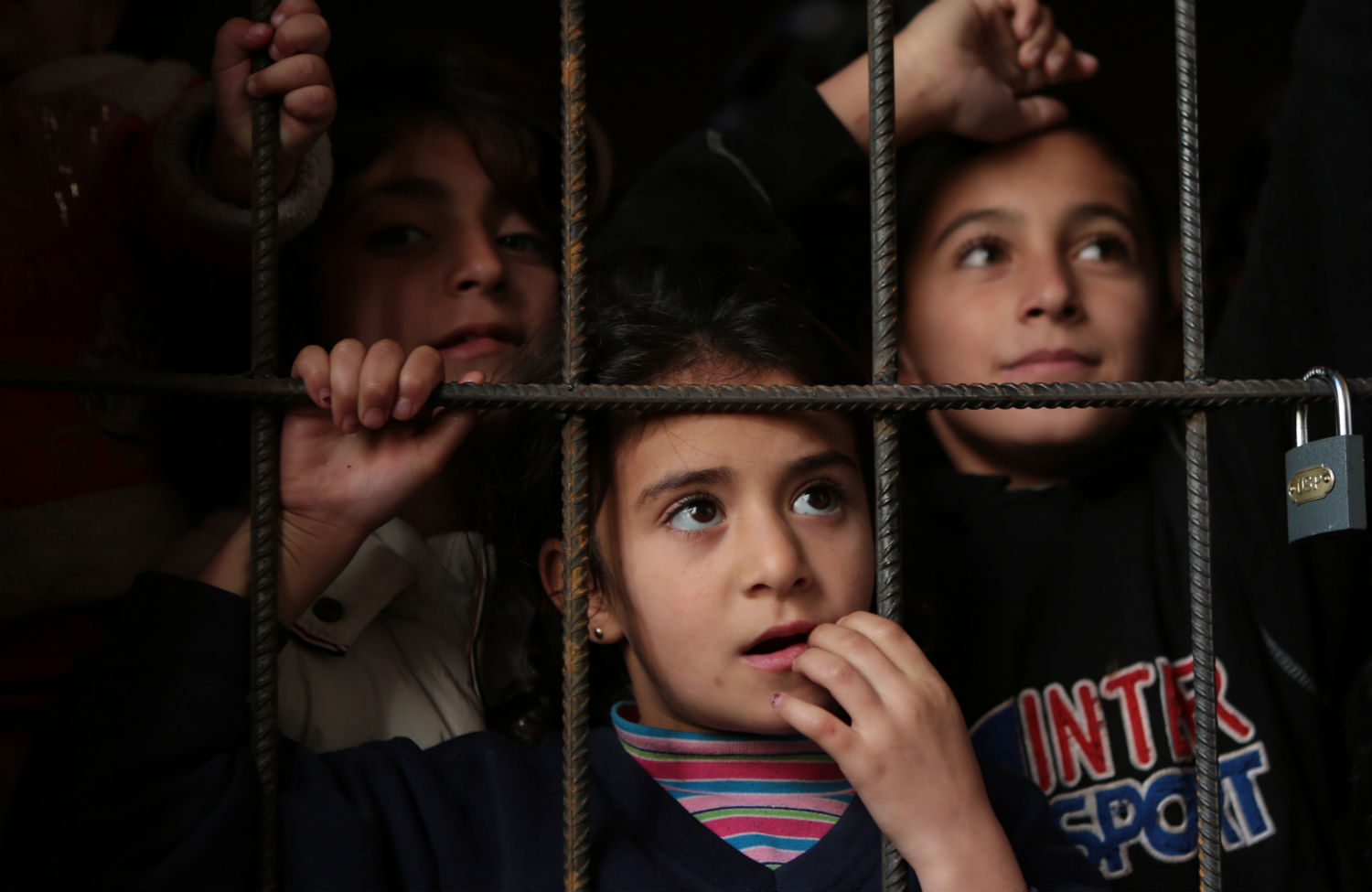 Syrian children look between as they bars wait for a medical check up in a corridor of newly opened refugee camp, in an old school in Sofia, Saturday, Oct. 26, 2013. (AP Photo / Valentina Petrova)

Earning a minimum wage in an expensive city makes for a generally unpleasant experience—but although I’m grimly acquainted with this situation, I can’t fathom how difficult it must be for those supporting dependents. There are rumblings within congressional bodies across the country to increase the minimum wage as popular support has surged in favor of the idea. Those within the business sector often allege the old lie that raising the minimum wage “hurts the very people it’s trying to help;” true that in the short term some miserly businesses may cut their number of workers to shield the revenue stream for shareholders and higher-level executives, but it’s completely medieval to keep the minimum wage at its current level. Had the wage kept pace with either worker productivity or inflation, it would now be somewhere between $21.72 and $10.52.

In light of the frenzy of Twitter going public, n+1 senior editor Benjamin Kunkel underscores the need to view the digital spaces in which we socialize as publicly owned commons. Profits drawn from the sum of our social interactions, he argues, degrade the quality of these “public utilities” and constitute “a form of social rent.” He unfortunately glosses over the possibility (or inevitability) of government snooping, but, well, it’s a manifesto. He gets some slack.

This account of an 18-year-old Iraqi student’s obsession with violent American video games, which he describes as his only escape from the continued devastation of his country, illustrates the ongoing effects of the bungled American invasion and occupation of Iraq through a more personal lens. With the death toll rising by the month due to reignited sectarian violence, it is important to read personalized accounts of the lives impacted behind the headlines listing the number of dead.

It’s that time in your news cycle again when everyone in the media tries to put their finger on what exactly is wrong with women and their orgasms. The New York Times squirreled away an exposé on why women who engage in hook-up culture have fewer orgasms than men on its ‘Well’ blog. The conclusion: women achieve orgasm more easily when they are in a committed relationship (cause we all know that the invention of happy couples came before the invention of sex). Katie McDonough at Salon responded with a meek suggestion that perhaps the real culprits are performance anxiety and discomfort around strangers; she too cites studies. Her article unfolds below a picture of two pairs of white feet, one big and one small, innocently poking out from beneath a white sheet. And Bustle approved of this orgasm-talk with its obligatory high-five to all click-bait floating about the feminist blogosphere: “So, my slutty contemporaries, carry on!” How to make sense of this muddle? I refer you to former Nation intern Anna Lekas Miller’s excellent interview from a few weeks back with artist Sophia Wallace, whose traveling street art, installation and viral information campaign “Cliteracy” seeks to raise awareness about what the clitoris is, where it is and how to debunk the many cultural myths that obscure it.

Large urban hospitals already provide healthcare to thousands of uninsured and underinsured patients each year. Yet the twenty-six Republican-controlled states that have opted out of Medicaid expansion have added to their burden; eight require that counties contribute to the non-federal share of Medicaid costs and fifteen are now insisting that counties provide some kind of indigent care. Instead of receiving much-needed financial support through the ACA, these overburdened city hospitals—and the taxpayers who live in their vicinity—will continue to be saddled with the responsibility of funding healthcare for America’s uninsured.

Ayatollah Ali Khamenei is the top cleric in Iran and has the final say in every government decision, but this six-month investigation by Reuters explores another reason why he has been able to hang onto power for twenty-four years: his grasp on major aspects of Iran’s economy through a highly secretive government organization. Part one describes how the organization known as Setad has been seizing and consolidating billions of dollars worth of property belonging to the marginalized Baha’i community, a group whose religion is seen as heresy by Iran’s Muslim majority. Part two describes how the organization later went on to claim major stakes in the banking and telecommunications sectors and was added to the list of companies overseen by the US State Department’s sanctions list. Finally, in part three, we see how Setad has continued to build its economic empire by stretching the limits of the law under Khamenei’s watch.

“People in Syria told me Bulgaria is good. This is not true.” Thus speaks a young Syrian who has fled the violence and injustice of his country to seek a better life in Europe. I’ve written here before about the rise of fascist groups in Eastern and Western Europe, so it’s not surprising—if no less chilling—that some Bulgarians are adopting hard-right anti-immigrant views that would seem more at home under the World War II regime of Tsar Boris III. But the details of the miserable conditions in refugee camps, the violence these immigrants are suffering—and, most importantly, the fact that the state’s machinery is allowing this to happen—are all particularly worrying. Refugees are being dehumanized both by this violence, these conditions and in the popular press, where they have been called “cannibals.” Hopefully good reporting such as this piece will force legislation against hate crimes and the rise of the far right.

—Andrés Pertierra focuses on Latin America, with an emphasis on Cuba.
Follow @ASPertierra

Venezuelan President Nicolás Maduro is not facing an easy first term. Galloping inflation, tough government control on the export of hard foreign currency, soaring prices despite strict official price controls and widespread shortages of basic goods have the country in economic turmoil. At the same time, Venezuelan opposition figures seek to take advantage of—and according to Maduro, foment—these issues in their campaign to take back power in the upcoming elections. On Friday, President Maduro ordered the military occupation of electronics chain Daka in order to supervise government-imposed prices.

“One day in the life of Mikhail Khodorkovsky,” by Neil Buckley. Financial Times, October 24, 2013.

That an elite businessman worth an estimated $15 billion could end up in prison for ten years (and perhaps more) seems—a little sadly—unimaginable to me as an American. But that’s what happened to Russian oil tycoon Mikhail Khodorkovsky, who was arrested in 2003 after a fallout with President Vladimir Putin. After providing some context for Khodorkovsky’s incredible downfall, Buckley let’s him describe in his own words the conditions of his life in Russia’s prison system.

“Why We Are Allowed to Hate Silicon Valley,” by Evgeny Morozov. Frankfurter Allgemeine Zeitung, November 11, 2013.

Morozov shows—with examples that may seem like the product of a Luddite’s wild imagination but are in fact real (see: Facebook’s real-time ad auctions)—why his critique of Silicon Valley is not a digital, but a deeply political and economic, one.