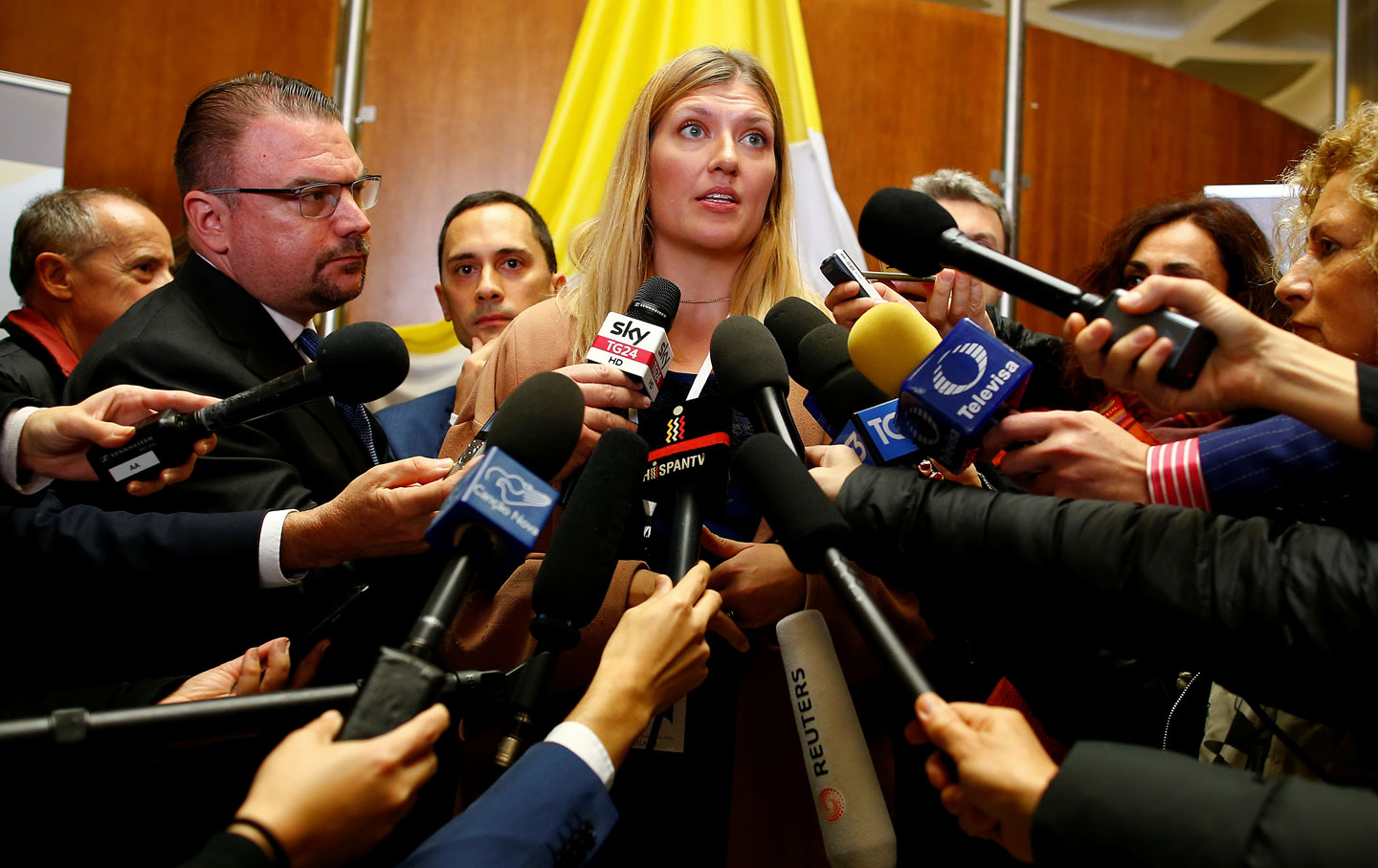 In Oslo on December 10, the Nobel Peace Prize was awarded to the International Campaign to Abolish Nuclear Weapons (ICAN) and was accepted on behalf of the Campaign by its executive director, Beatrice Fihn, and by Setsuko Thurlow, an ICAN campaigner and survivor of the 1945 Hiroshima bombing. Both spoke for the thousands of campaigners in over 400 organizations and more than 100 countries around the world who succeeded this fall in working with friendly governments to move a majority of states at the United Nations to adopt a treaty to prohibit to ban nuclear weapons, making their possession, use, or threat of use unlawful.

The ceremony opened with a piercing fanfare by four trumpeters, their horns hung with crimson banners, from a stone balcony high up in the sunlit-filled, mosaic-covered Oslo City Hall over a distinguished crowd below that included a former Peace Prize laureate; ambassadors and other government officials, including the prime minister of Norway and the mayor of Hiroshima; movie stars and rock stars; as well as several hundred grassroots ICAN campaigners from every corner of the globe. As the trumpets sounded, the king and queen of Norway and the crown prince and princess strode down the red-carpeted aisle, followed by members of the Nobel Committee and the two ICAN speakers.

It has been just 10 years since ICAN first launched its astonishing campaign to ban nuclear weapons, just as chemical and biological weapons have been banned as well as land mines and cluster bombs. The Treaty on the Prohibition of Nuclear Weapons has now closed a legal gap in the 1970 Non-Proliferation Treaty (NPT) that only requires “good faith efforts for nuclear disarmament” by the then-five existing nuclear weapons states—the United States, Russia, UK, France, China. ICAN organized a series of three major conferences in Norway, Mexico, and Austria together with government leaders, scientists, lawyers, and other experts, including representatives from the International Red Cross, a critical actor in this journey to ban the bomb. It was the International Red Cross who contributed a unique statement about the catastrophic humanitarian consequences of nuclear weapons in 2000 that changed the global conversation about these devastating instruments of mass destruction.

Instead of nuclear weapons’ being described in abstract terms, with references to strategic security needs and deterrence policies, a conversation dominated by the nuclear-weapons states and by US nuclear allies in NATO, as well as Japan, Australia, and South Korea (none of whom support the new treaty), there has been a shift in how nuclear weapons are discussed. There is a a growing realization that these military and security concepts fail to acknowledge the catastrophic humanitarian consequences that would result from any use of a nuclear weapon. The new conversation was given a great boost by the Vatican, which participated in the UN negotiations and held a subsequent nuclear-disarmament conference this month to discuss its newly announced policy change from one that supported the concept of “deterrence” for the use of nuclear weapons in “self-defense” to a new policy declaring that nuclear weapons must never be used under any circumstances.

Despite the nearly 50-year-old NPT promise by the nuclear-weapons states for nuclear disarmament, ICAN Executive Director Fihn, in her acceptance speech, reminded us that “at dozens of locations around the world—in missile silos buried in our earth, on submarines navigating through our oceans, and aboard planes flying high in our sky—lie 15,000 objects of humankind’s destruction,” adding that “it is insanity to allow ourselves to be ruled by these weapons.”

Fihn went on to note that critics of ICAN’s success in closing the legal gap in the NPT with the new ban treaty describe its campaigners as “the irrational ones, idealists with no grounding in reality. That the nuclear-armed states will never give up their weapons.”

But we represent the only rational choice. We represent those who refuse to accept nuclear weapons as a fixture in our world, those who refuse to have their fates bound up in a few lines of launch code. Ours is the only reality that is possible. The alternative is unthinkable. The story of nuclear weapons will have an ending, and it is up to us what that ending will be. Will it be the end of nuclear weapons, or will it be the end of us? One of these things will happen. The only rational course of action is to cease living under the conditions where our mutual destruction is only one impulsive tantrum away.

Fihn also exclaimed, to enthusiastic applause, “Man—not woman!—made nuclear weapons to control others, but instead we are controlled.”

They made us false promises. That by making the consequences of using these weapons so unthinkable it would make any conflict unpalatable. That it would keep us free from war. But far from preventing war, these weapons brought us to the brink multiple times throughout the Cold War. And in this century, these weapons continue to escalate us towards war and conflict. In Iraq, in Iran, in Kashmir, in North Korea. Their existence propels others to join the nuclear race. They don’t keep us safe, they cause conflict…. But they are just weapons. They are just tools. And just as they were created by geopolitical context, they can just as easily be destroyed by placing them in a humanitarian context. That is the task ICAN has set.

Fihn called on all nations and each of the nine nuclear weapons states individually to join the Treaty on the Prohibition of Nuclear Weapons, saying,

She also asked the nations “who believe they are sheltered under the umbrella of nuclear weapons, will you be complicit in your own destruction and the destruction of others in your name?” And she called on all citizens to “Stand with us and demand your government side with humanity and sign this treaty,” noting that “no nations today boast of being a chemical weapons states” or “argue that it is acceptable, in extreme circumstances, to use sarin nerve agent” or “to unleash on its enemy the plague or polio. That is because international norms have been set, perceptions have been changed. And now, at last, we have an unequivocal norm against nuclear weapons.”

Setsuko Thurlow, an ICAN campaigner who survived the bombing of Hiroshima as a 13-year-old, spoke next, bearing witness to the excruciating pain and terror she saw all around her as she escaped from the rubble she was buried under in the bomb’s aftermath, where so many of her schoolmates died and where so many of her family were lost as well. She reminded us that “in the weeks, months and years that followed, many thousands more would die, often in random and mysterious ways, from the delayed effects of radiation to this day, radiation is killing survivors.”

She acknowledged the suffering and willingness to bear witness not only of the Hibakusha, as Japanese refer to the survivors of the nuclear bombs dropped on Hiroshima and Nagasaki, but also of others who suffered from the nuclear age, including peoples “whose lands and seas were irradiated, whose bodies were experimented upon, whose cultures were forever disrupted” in places with “long-forgotten names” like Mururoa, Ekker, Semipalatinsk, Maralinga, Bikini.

Through our agony and the sheer struggle to survive—and to rebuild our lives from the ashes—we hibakusha became convinced that we must warn the world about these apocalyptic weapons. Time and again, we shared our testimonies.

But still some refused to see Hiroshima and Nagasaki as atrocities—as war crimes. They accepted the propaganda that these were “good bombs” that had ended a “just war.” It was this myth that led to the disastrous nuclear-arms race—a race that continues to this day.

Nine nations still threaten to incinerate entire cities, to destroy life on earth, to make our beautiful world uninhabitable for future generations. The development of nuclear weapons signifies not a country’s elevation to greatness but its descent to the darkest depths of depravity. These weapons are not a necessary evil; they are the ultimate evil.

Thurlow went on to say:

On the seventh of July this year, I was overwhelmed with joy when a great majority of the world’s nations voted to adopt the Treaty on the Prohibition of Nuclear Weapons. Having witnessed humanity at its worst, I witnessed, that day, humanity at its best. We hibakusha had been waiting for the ban for seventy-two years. Let this be the beginning of the end of nuclear weapons.

All responsible leaders will sign this treaty. And history will judge harshly those who reject it. No longer shall their abstract theories mask the genocidal reality of their practices. No longer shall “deterrence” be viewed as anything but a deterrent to disarmament. No longer shall we live under a mushroom cloud of fear.

To the officials of nuclear-armed nations—and to their accomplices under the so-called “nuclear umbrella”—I say this: Listen to our testimony. Heed our warning. And know that your actions are consequential. You are each an integral part of a system of violence that is endangering humankind. Let us all be alert to the banality of evil.

Both speakers received standing ovations for their moving addresses and calls to action, and, with a room filled with hundreds of grassroots campaigners, the thunderous applause for the speakers was noted to be highly unusual for a Nobel award ceremony. The legal requirement for the Treaty on the Prohibition of Nuclear Weapons to enter into force and to be binding on its signatories is that it must be ratified by 50 nations. To date, 56 countries have signed the treaty and four nations have ratified it in their legislatures.

To get involved in the ICAN campaign, visit http://www.icanw.org. There is a Parliamentary Pledge there that you can use to enroll your member of Congress or Parliament in calling for your nation to support the ban treaty. In the nuclear-weapons states and in the US nuclear alliance with NATO states and Australia, South Korea, and Japan in the Pacific—the “nuclear umbrella” states—grassroots efforts are under way to begin the stigmatization of their nuclear weapons and policies with a divestment campaign from nuclear-weapons manufacturers, since the treaty prohibits any “assistance” for nuclear weapons.