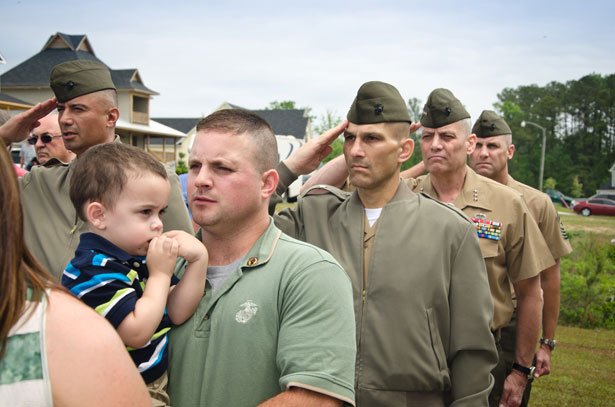 Vincent Gizzarelli, who retired from the Marine Corps after suffering traumatic brain injuries from IED blasts in Iraq, holds his son during the dedication ceremony of his family’s new house in North Carolina. (Wikimedia Commons, CC 2.0)

Dire reports about the failure of the Department of Veterans Affairs to provide adequate care for those who served in this country’s military forces are not just a serious issue for veterans. They are a serious issue for every American who believes the federal government can and must meet the basic commitments necessary to maintain a civil society.

Unfortunately, that seriousness is not reflected in the frenzy of finger-pointing that has developed as a response to “the public’s outrage over excessive wait times and rigged record-keeping at Veterans Affairs hospitals”—an outrage that the president of the American Federation of Government Employees (AFGE), the union that represents caregivers for vets, refers to as “more than justified.”

There is no question that the VA has a problem that must be addressed.

The question is whether the politicians in Washington are ready to address it.

The most predictable of the political careerists, Republican and Democrat, seem to think that firing VA Secretary Eric Shinseki will somehow “fix” things, or that the removal of a few failed managers will suddenly create a functional VA. But that is an absurdly insufficient response.

Depending on what reports regarding the agency reveal, there may well be a place for new leadership and a management shakeup. And those changes might briefly produce a fantasy of action and improvement. But that is all it could be: a fantasy. And a cruel fantasy, at that.

Neither the immediate crisis, nor serious issues relating to the long-term future of the VA, will be settled with a mere reorganization of upper management. The real issues are closer to the ground. The VA needs to have enough doctors, nurses and aides to provide the care that is needed—and the doctors, nurses and aides who are now on duty must have the resources and the flexibility to assure that this care is delivered in a timely and responsible manner.

That is not now the case.

“When we look deeper into this issue of extended wait times for veterans to receive an appointment, we have to recognize that understaffing is a major culprit,” explains AFGE president J. David Cox Sr. “All around the country, medical facilities are understaffed, with numerous frontline care positions going unfilled. How can the VA expect to keep up with the growing needs of our nation’s heroes if it doesn’t properly staff its facilities?”

“According to the Independent Budget for the Department of Veterans Affairs, developed each year by leading veterans groups, funding levels will remain an estimated $2 billion short in FY 2015 and approximately $500 million short for FY 2016,” the AFGE notes.

Members of Congress—at least those who pay minimal attention to veterans issues—have for some time been aware of the funding shortfall. Yet too many of them have resisted calls for action.

The reason is that the current Congress is packed with partisans who are more concerned with maintaining an austerity agenda than with caring for Americans who are in need.

Too many members of Congress continue to prattle on about how government is the problem, about how spending must be cut to meet their imagined bottom lines, about how the resources are not there to keep promises to vulnerable Americans—even if the resources are always there for wars of whim and a military-industrial complex that provides daily evidence of the extremes to which waste, fraud and abuse can be taken.

The current Congress includes a striking number of members who express open antipathy to meeting the guarantees that have been made to all Americans, including veterans. These members of Congress are so unthinking in their approach, so cruel in their budgetary calculus, that they casually, in some cases gleefully, presided over a government shutdown last fall.

Republicans get blamed for advancing the austerity agenda, but it is important to remember that more than a few Democrats have compromised with it. And the difference between those who promote austerity and those who make the compromises that allow for austerity means very little to Americans who are stuck on the waiting lists that are created by budgeting that owes more to Ayn Rand tomes than accounting textbooks.

The VA crisis is a wake-up call.

It is time to get serious. It is time to abandon austerity, and to recognize that core commitments cannot be compromised in order to maintain ideological fantasies.

Senate Veteran Affairs Committee chairman Bernie Sanders, I-Vermont, tried to get ahead of a host of issues concerning veterans in February, when he proposed comprehensive legislation to improve VA healthcare, education and job-training. Though it was strongly backed by the American Legion, Veterans of Foreign Wars, Disabled American Veterans, Iraq and Afghanistan Veterans of America and other organizations representing vets, the measure was blocked when most Senate Republicans opposed it. To Republicans who suggested the measure was too expensive, Sanders said, “If you think it’s too expensive (to fund veterans programs), then don’t send them off to war.”

Last week, Sanders announced that he would reintroduce his plan to allocate $21 billion more for veterans initiatives over the coming decade. He is, as well, proposing a new VA accountability measure. The latter legislation removes bureaucratic barriers and makes it easier for the secretary of veterans affairs to make management changes that are necessary to protect those who have served in the military.

The Sanders approach recognizes the need to move beyond the failed responses of America’s austerity-minded politicians while at the same time increasing accountability. It’s a smart long-term fix that eschews the easy sloganeering and empty promises of those who would politicize the VA crisis.

Conscious of the urgency of that crisis, the senator plans to move quickly to get both measures to the Senate floor. “In recent years, as a result of the wars in Iraq and Afghanistan, 1.5 million more veterans have entered the VA health care system,” says Sanders. “Congress must do everything possible to make certain that the VA has the financial resources and administrative accountability to provide the high-quality health care and timely access to care that our veterans earned and deserve.”