The critic and novelist William H. Gass celebrated the novel’s capacity for a consciousness that belonged to neither reader nor writer but to the text alone. It was, for Gass, something wonderfully artificial, a glittering construction that could, when it worked, faithfully render thought’s wrinkled texture: “improved, pared, paced, enriched by endless retrospection.” The loose, recursive, formally inventive novels of the modernists were bound up with interior monologue, and the very capriciousness of the mind—its unpredictability, its unwilling revelations, its pettiness and secret pain—became the engine of an ambitious new literature. Here Gass’s designation of the novel as “a container of consciousness” finds its most sympathetic accord. More so than most art forms, the novel allows for a continuous digressive richness that aptly mimics particular aspects of human consciousness. It is there in the somewhat harried voice that lives in multiple registers of time, that hems and haws, remembers, compensates, critiques, gossips with itself, and tells the private stories that allow us our illusory consolidations. Here is the soul, or something like it: Molly Bloom, Quentin Compson, Lily Briscoe, Geoffrey Firmin.

Although she has no name, we might add the narrator of Austrian writer Ingeborg Bachmann’s novel, Malina, to this list. Published in 1971, two years before the apartment fire that would end Bachmann’s life at the age of 47, Malina was the first of a planned trilogy of works called Todesarten, or “Ways of Dying.” Her oeuvre—she also wrote short stories and was a celebrated poet and essayist—inhabits what Bachmann called a “utopia of indeterminateness,” the darkly satiric, semi-mystical, elegantly ironic territory of Austrian modernist progenitors like Robert Musil, Joseph Roth, and Hugo von Hofmannsthal. Yet, despite obvious affinities, she remained something of an unwilling heir. Although Bachmann imbibed the despondent charm of her forebears, her only finished novel reaches the contemporary reader as something strange and sui generis: an existential portrait, a work of desperate obsession, a proto-feminist classic, and one of the most jagged renderings of female consciousness European literature has produced. In its torrent of language, paralyzing lassitude, and relentless constriction of expectation and escape, Malina condenses—and then detonates—the neurasthenic legacy of the interwar Austrian novel.

Summary does Malina no favors. Bachmann exhibits great impatience with tidy unities, and any attempt to capture the frothing consciousness at the book’s center is a little like trying to describe a captive tiger’s attack from the other side of the cage. (One imagines translator Philip Boehm had his hands full.) The narrator, a depressive, middle-aged Viennese writer, has fallen in love with a younger Hungarian man, Ivan, seemingly out of gratitude for the “injections of reality” he furnishes her diminished existence. “Nothing would be too much trouble,” she says, “nothing too far-fetched for me, too strenuous, in order to snatch a piece of Ivan’s life.” The eponymous figure she shares a Third District apartment with, the enigmatic Malina, is a former writer and civil servant in the Austrian Military Museum. (Whether or not he is also a figment of the unnamed narrator’s imagination the reader will spend some 300 pages trying to decide.)

The usual complications of a love triangle—the comic misunderstandings of farce, say—are nowhere present in Malina. Jealousy is mediated by a refusal of acknowledgment. The two men refer to each other obliquely if at all. (When Malina examines a chess board containing the recent maneuverings of his ostensible rival, his only response is to make a small joke at the evidently poor quality of the other’s play.) Both men—one unknowingly and the other with fastidious insistence—compel the narrator to examine the open wound of her past. What ensues is a kind of domestic ouroboros, an act of self-flagellation in which the narrator attempts to negotiate the many psychic dislocations the situation demands of her. “I don’t want to lead Ivan astray, but he’ll never realize that I am double,” she admits. “I am also Malina’s creation.”

The first section of the novel—entitled, ironically, “Happy with Ivan”—describes the narrator’s initial rejuvenation by way of her new erotic fascination. “At last I am able to move about in my flesh as well, with the body I’d alienated with a certain disdain,” she says. “I feel how everything inside is changing, how the plain and diagonally striated muscles relax, freeing themselves from their constant cramps, how both nervous systems convert simultaneously, because nothing takes place more distinctly than this conversion, an amending, a purification.” There is from the first a precarity to this happiness. It is manic, devouring, prey to the enormous illusions of obsessive love: “the world’s schizoid soul, its crazy, gaping split, is healing itself”—thanks to Ivan, of course. This infatuation roots her in a neurotic stasis, and much of the novel is staged in the limbo of anticipation. We watch her smoke endless cigarettes, write (and then destroy) letters to friends and politicians, engage in brittle, circuitous conversations with Malina, battle insomnia, take pills, and wait beside the phone for the call that may or may not finally come. 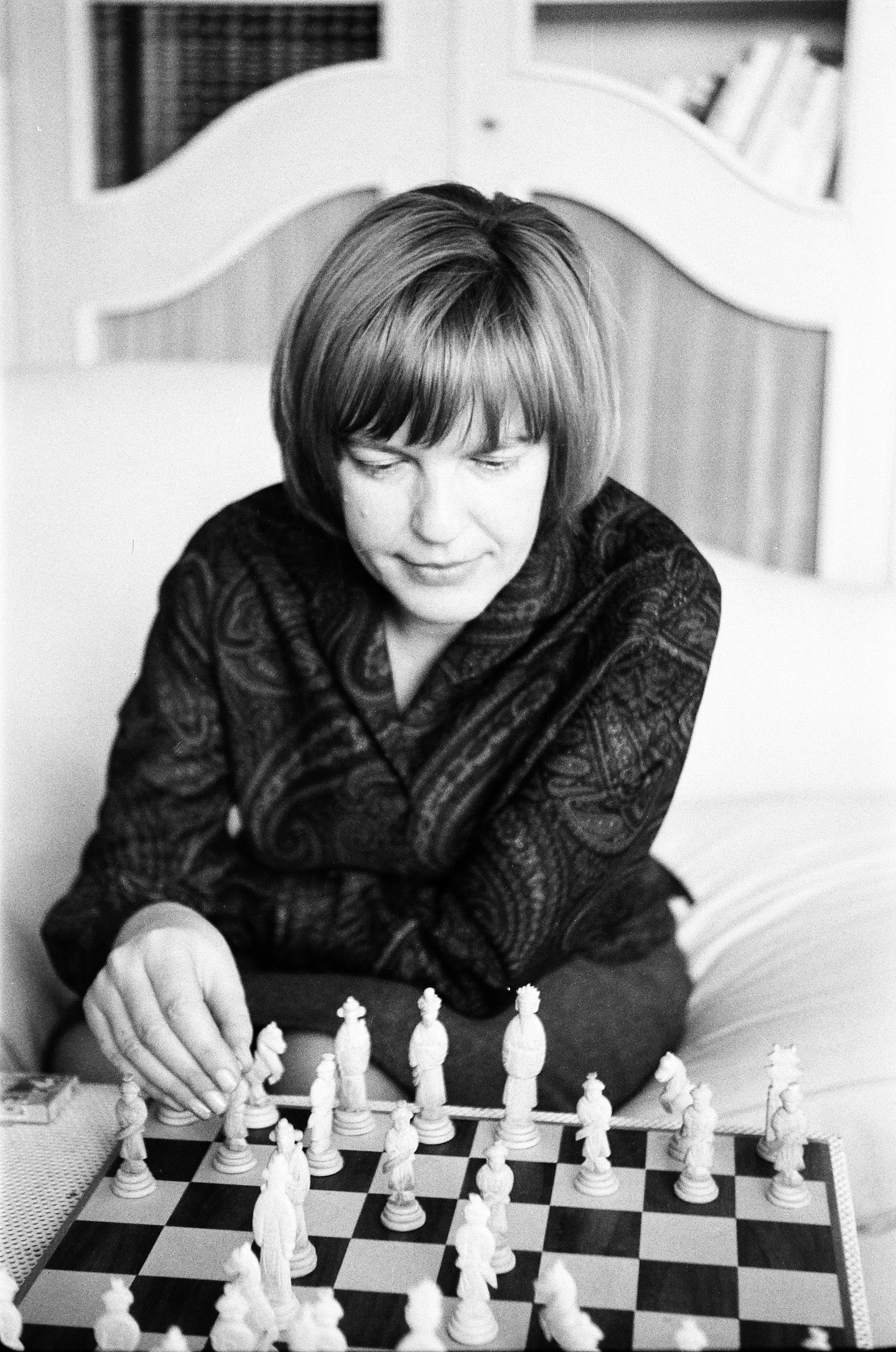 Ivan is not a bad sort, though it is difficult to locate the charm ascribed to him. He appears hazy and indefinite, delimited by the scarcity of his affection, his bourgeois stolidity, and off-putting reticence. Their phone conversations, faithfully transcribed by Bachmann, are chirpy, staccato, and filled with misunderstanding: Sentiment misses its target or goes unnoticed; conversation is frequently interrupted by one or the other. Their dates are brief and revolve around chess, trips to the Gänsehäufel swimming pool, and ferrying Ivan’s two sons around town. (Ivan is separated from his wife.) “I would like Ivan to need me like I need him,” the narrator admits. After discovering her notes for a future novel, Ivan asks her, in an offhand way, to write a story with a “happy ending.” The resulting effort—a fairy tale called “The Mysteries of the Princess of Kagran”—is an exquisitely sad bit of self-mythology, a doomed attempt “to hide [herself] in the legend of a woman who never existed.” Ivan’s seemingly innocuous request for a happy story precipitates the fissure enacted in the novel’s second part, “The Third Man.”

It begins with ominous certainty: “Malina shall ask about everything.” Ivan recedes almost entirely as a lurid tête-à-tête unfolds. At Malina’s quiet, persistent urgings, the narrator delves into the repressed pain of her childhood (referred to as “a book of Hell”) in a series of dreamlike fragments detailing rape, incest, and abandonment at the hands of her father. Between these harrowing admissions, Malina carries out the ministrations of a confessor. “It’s war. And you are the war,” he tells her. “You yourself.” This section’s concentrated pain and sense of compulsion make reading it akin to picking at scabs. It is with a certain measure of relief that we reach the end of it, culminating in the defiance of the narrator’s bleak self-knowledge: “Never again. It’s always war. Here there is always violence. Here there is always struggle. It is the everlasting war.”

An eternal war with eternal adversaries. “Most men usually make women unhappy,” the narrator says, “and there’s no reciprocity, as our misfortune is natural, inevitable, stemming as it does from the disease of men, for whose sake women have to bear so much in mind, continually modifying what they’ve just learned.” For the narrator, merely living as a woman is an act of unspeakable contortion. Malina’s many formal gambits, then, are not only the features of an avant-garde novel, but attempts to outpace the insufficiencies of a language that hides within it a system of control. Like the warping effect of capital, this totalizing grammar tends to co-opt its own critique: “It might be said of women that they are more or less marked by the contaminations they’ve contracted by sympathizing with the suffering.”

That sense of contamination is the animating principle of “Last Things,” the novel’s feverish final section. The narrator comes to see her life—that is, her language, her expectations and desires, her dreams, fears, and fantasies—as operating within and beneath the sovereignty of male reason. (“What is life?” Malina asks her, to which she responds, “Whatever can’t be lived.”) Her mind contracts beneath the weight of this realization, and the ensuing psychological disintegration makes for an awe-inducing performance of prose style. The boil of the narrator’s consciousness is captured in intricate and surprising structures: the dynamic markings of orchestral music (accelerando, crescendo, presto, prestissimo), play-like dialogue, atonal scores, drug-induced mania, and letters signed by “an unknown woman.” The effect is an acceleration of thought that enacts its own depletion, like the whirling vortex that drains a basin of its water. “You go and take over the stories—from which the big story is constructed,” she says in one of her final conversations with Malina. “Take them all away from me.” The narrator disappears through a crack in the wall at the novel’s conclusion, pursuing a figment of her lost happiness: “There is something inside the wall, something that can no longer cry out, but cries out nonetheless: Ivan!”

“It was murder,” we are told of the disappearance, and not suicide—an important distinction. The lasting quarry of Bachmann’s novel is the fluidity of violence, its ability to move effortlessly from the private sphere to the public one. “[Fascism] doesn’t start with the first bombs that are dropped…. It starts in relationships between people,” she said in an interview shortly before her death. “Fascism is the first thing in a relationship between a man and a woman.” There is a refrain throughout Malina, a kind of utopian prophecy: “A day will come.” From the denial of the narrator’s experience—out of that vast erasure—it rises like the sum of hope or grace. “I can no longer write the beautiful book,” she says near the novel’s end. Instead, almost miraculously, Bachmann wrote this one.