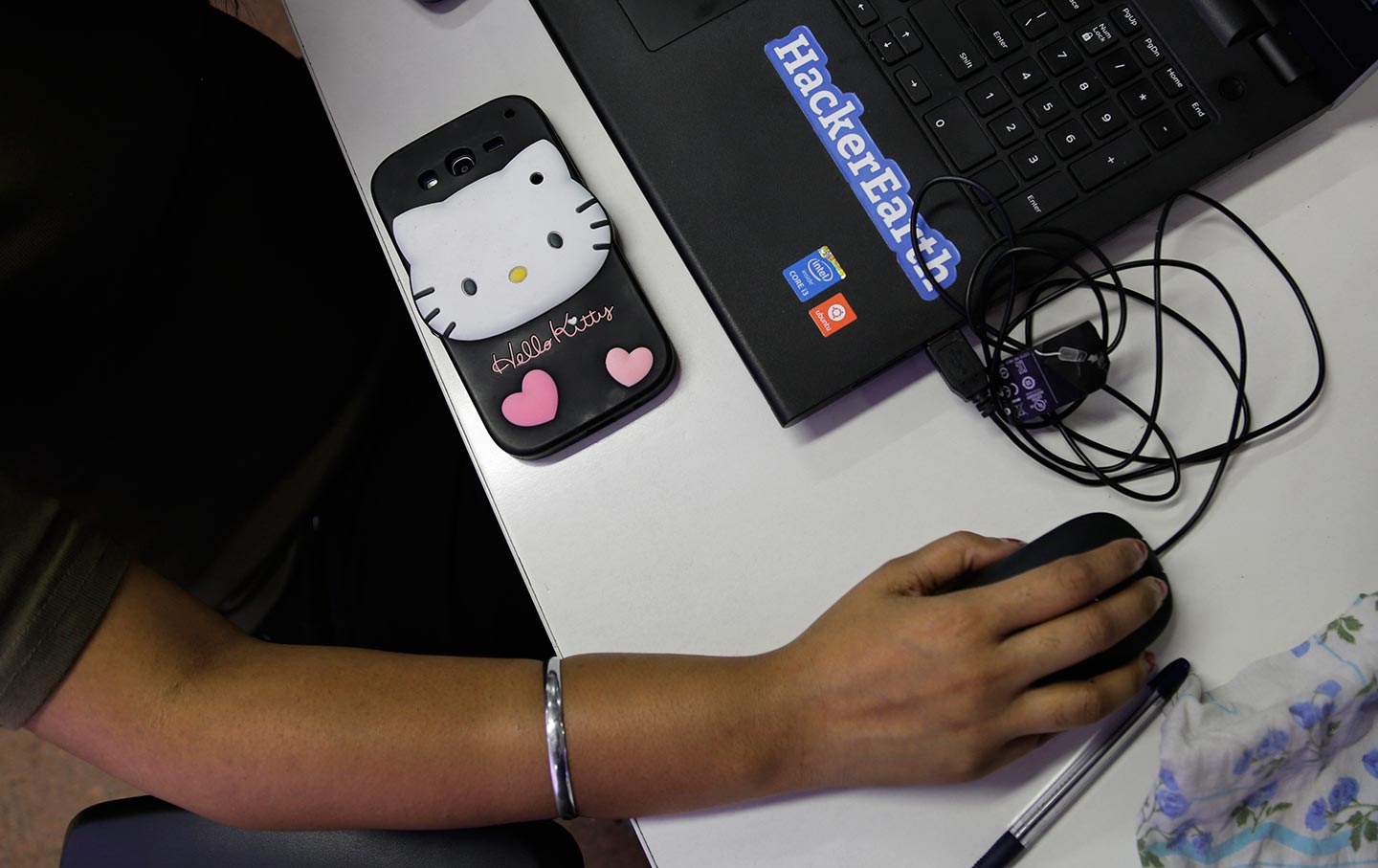 An employee works on her computer at the office of HackerEarth in Bangalore, India, October 14, 2015. (AP Photo / Altaf Qadri)

There was a time not too long ago when India’s millennial elites, born into an age of globalization, hailed the “technological revolution” as a one-way ticket to infinite opportunity. Today the economic miracle has been derailed, and young workers are starting to demand a refund.

In recent months, workers have reported that mass layoffs at Indian tech hubs are becoming routine as companies shed engineers and slash wages and benefits. Companies that previously invested heavily in emerging Indian firms for global outsourcing contracts seem to be recoiling from a volatile global labor market, and India’s rapid economic expansion is hitting snags.

The global digital bubble’s seemingly inevitable pop has also been sped along by Trump’s protectionist rhetoric and promise of “reshoring” offshored jobs to the United States. This week, even as Indian Prime Minister Narendra Modi talks business on his maiden visit to the Trump White House, the administration is also moving to tighten the criteria for the H-1B visa, a federal program that has drawn in tens of thousands of foreign professionals, particularly technicians and programmers from India—often at relatively low pay rates.

Some companies appear to be yielding to Trumpism. The tech-service firm Infosys, for example, announced plans to hire 10,000 US-based workers, presumably in lieu of more offshoring. While firms are denying that they are deliberately cutting their Indian workforces, Bloomberg reports that the head of one Bangalore-based recruiting firm “anticipates terminations will accelerate and top 150,000 or even 200,000 next year.”

Trump’s populist base may welcome the idea of excluding Indian labor migration, but visa workers and those working for overseas contractors now find themselves on the losing side of globalization.

The glimmer of hope to come out of this moment, however, is that India’s coders have been building new organizing platforms. Workers have been organizing regionally in Karnataka, Telangana, Maharashtra and West Bengal for fair contracts and improved working conditions. One formal union has emerged—the Communist New Democratic Labor Front (NDLF) launched an IT Employees (ITE) wing in January. So far there are only 200 members, established recently in Tamil Nadu, which has a tech workforce of roughly 200,000, according to organizer S. Kumar, writing via e-mail from Tamil Nadu.

Though the immediate threats of layoffs have galvanized organizing efforts, workers say labor conditions have been eroding for years. In a volatile industry known for “flexibility,” many tech workers are besieged with a “non-transparent and arbitrary appraisal system [and] unfair dismissals,” Kumar says. Initially these challenges were offset by “the relatively higher salary and overseas opportunities,” and workers were reluctant to organize their workplaces and antagonize the management, so long as they had a chance of getting ahead in their own position through what Kumar, himself a software engineer, describes as “an extremely arbitrary appraisal process.”

Today, that opaque process isn’t as advantageous: top science institutions are churning out too many young students for the sector to securely absorb, Kumar says, and appraisals are used to justify arbitrary firings.

A testimonial published by a “concerned” ITE-affiliated worker recalled having previously received favorable performance evaluations. But in a recent management appraisal, the worker unexpectedly got branded with a probationary “needs improvement” label: “This was total humiliation to me and I fear that my job will be lost any day.” The author reminded coworkers that they also had “a fundamental right…to form associations or unions and in places such as Tamil Nadu and Andhra Pradesh, many have resorted to joining unions in an effort to challenge HR practices of IT companies. Why to wait until doomsday? Act NOW instead of repenting later after Layoff?… it’s Union which can question wrong moves of Management.”

Despite its call-center empires and multinational biotech investments, the atrophy of India’s tech sector was already apparent before Trump’s victory. But the twisted surge of protectionism and xenophobia fueling Trump’s populist rise is creating backlash against many US-based Indian migrants, who find themselves slipping from the social status many once thought they enjoyed as middle-class professional immigrants. The backlash extends beyond the United States; hostility toward India’s current overseas visa workers has been echoed in Singapore, where preserving jobs for native-born workers also seems to take priority over providing equitable conditions and stable jobs for all workers.

In reality, Kumar says, in today’s global tech industry, “both Indian as well as US employees have less hope of employment.”

In India, disempowerment on the labor front presents new challenges as well: instability and precarity aren’t bugs but features of India’s tech sector. Although subcontracting and “gig” work are not as widespread perhaps as they are in the States, India suffers from weaker enforcement of basic labor protections overall.

Until recently, it was not even clear if IT professionals could legally form unions at work, Kumar says, due to a “deliberate and sustained misinformation campaign by the companies in IT sector that Indian labour laws are not applicable to IT sector.” But a court challenge led by NDLF resulted in a Madras court ruling establishing that IT workers “are free to form unions and bring grievances to the labour department.”

“Only organizing, not fighting each other for jobs, can stop the ‘race to the bottom’ on a global scale.”

With good jobs evaporating on both sides of the Pacific and the labor visa supply potentially dwindling, only organizing, not fighting each other for jobs, can stop the “race to the bottom” on a global scale. And with Trump and Indian Prime Minister Narendra Modi embodying two sides of a neoliberal global order, it’s clear that previous administrations have failed to deliver sustainable middle-class prosperity for either society.

No longer content to rely on rugged individualism to get ahead, workers in India and the United States are hoping to build networked solidarity through unionization, organizing workplace by workplace, perhaps eventually across continents. Software code might be the 21st-century lingua franca, but a universal labor code can be its workers’ new vernacular.