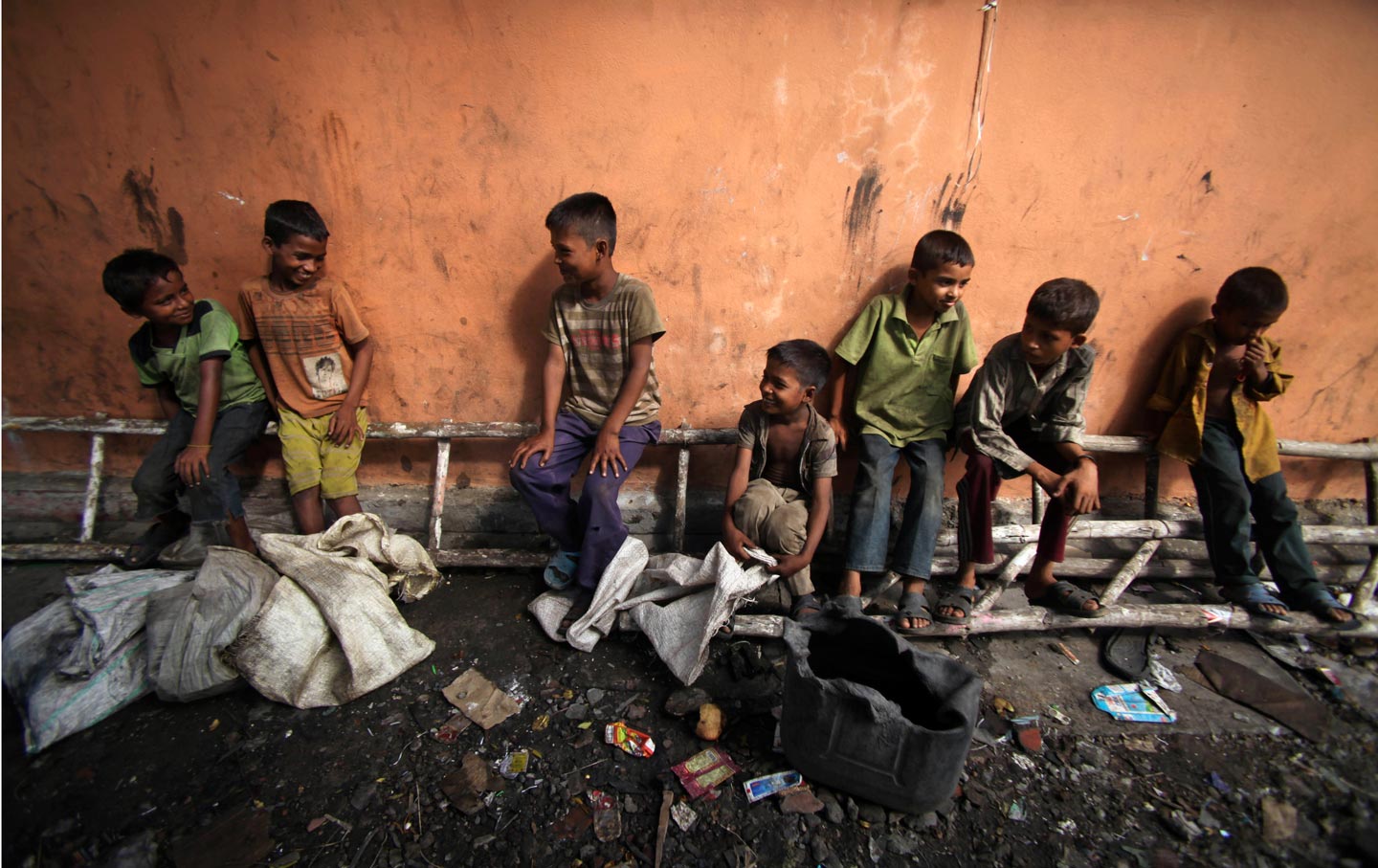 Ragpicker children rest at a yard on the outskirts of Jammu, India. (AP Photo / Channi Anand)

India’s new landmark child-labor bill should be a reason for children and human-rights advocates to celebrate, but it’s the bosses who are celebrating instead. Between the lines of a seemingly progressive law, some loopholes officially sanction child exploitation in one of the world’s major bastions of underage labor.

The law on the surface seeks to restrict child labor that continues to pervade unregulated low-wage industries, ranging from brick making to tea harvesting. However, an exemption for certain “family”-based businesses effectively leaves a soft spot for household-based industries fueled by kids’ cheap labor, including traditional trades like cigarette rolling or cutting cobblestones.

While it is in some cultural contexts acceptable for children to contribute economically to household-based enterprises, advocates inside and outside India fear the reforms simply allow purported cultural tradition to mask, rather than eradicate, a social scourge.

The Child Labour Act, which amends a 1986 child-labor statute, aims to be one of many measures India’s government has undertaken as part of its supposed “opening up” to the global economy, driven by rapid industrialization and international investment. However, social-welfare programs have lagged in advancing basic social rights and addressing deep inequality, leaving the poorest communities even more vulnerable to growing economic disruption. The lack of an effective safety net have pushed children into some of the country’s most precarious labor markets, and as much as 30 percent of child workers’ families rely on their labor to survive.

The law specifically enables children under the age of 14 to work in “family enterprises,” outside school, so children would be able to ply the family trade as long as they comply with the government’s education mandate. So preteens won’t be able to get roped into full-time employment to help their parents fill their labor contracts. The law does include more robust bans on “hazardous” work like mining, and increases fines for violators, but for many other home-based cottage industries, families could continue exploiting children’s labor.

In some agricultural industries, the line between “family-based” and industrial work is perilously blurry. India Committee of the Netherlands (ICN) recently reported that in cottonseed cultivation:

Children below 14—of which two-thirds are girls—are employed in the seed fields on a long-term contract basis through loans extended to their parents by local seed producers, who have agreements with the large national and multinational seed companies. Children are made to work 8 to 12 hours a day and are exposed to poisonous pesticides…. Most of the children working in cottonseed farms belong to poor Dalit (‘outcaste’), Adivasi (tribal) or Backward Castes families. Around 70 percent of the children are hired or even trafficked from other states while 30 percent is ‘family labour’. Most are school-dropouts.

The law brings India more in line with the standards codified in international protocols, including International Labour Organization Convention 138 on Minimum Age and Convention 182 on Worst Forms of Child Labor, which are the standards global campaigners often rely on when pressing their governments to reform trade policies and protesting corporate practices. Yet enforcement on the international level has largely centered around corporate ethical sourcing and social responsibility codes that are not legally binding. There has been some industry response to anti–child labor campaigns—for example, last August NGOs convened a summit with corporate seed growers on programs to eradicate child labor in the seed harvesting industry.

ICN Director Gerard Oonk says that the group will keep supporting its partners based in India by “urging for a stronger bill but at the same time trying to make use of the bill which at least includes that children can only work after school.” But with or without the new restrictions, vigilance and enforcement in the field is key. Oonk adds, “Without local mobilization and creating more education opportunities, this will remain on paper.”

Labor advocates in India, meanwhile, are frustrated that the law even on paper fails to address the root causes of child labor, including inequality and caste-based discrimination.

Shantha Sinha, a former head of the National Commission for the Protection of Child Rights, says via e-mail that, although the law has firmly “established a link between children’s right to education in a full time formal school and the program for abolition of child labour,” it falls well short of ensuring they grow up in conditions at home that channel them into school in the long term:

By allowing children [aged 6 to 14 to] work before and after school hours in family enterprises it dilutes the intent of the law that is meant to enable children enjoy their right to education. Children are forced to work for long hours, under oppressive conditions at the cost of health and well-being within their homes. They will never be able to participate in schools, and as they lag behind they dropout sooner than later.

The upside is that the law strengthens schooling mandates for young children and bars extremely dangerous jobs for workers aged 14 to 18. But older children may remain tethered to the workforce in some form, despite the reforms, by both economic pressures on their families and ancestral tradition. For example, lineage-based vocations, like weaving, once served as a form of social stability across generations, but today serve as economic shackles.

The child-labor law edges India a little closer to a certain ideal of economic modernity, without confronting the reality of caste, inequality, and neoliberalism across the Global South, even though the Modi government claims to be a model for “emerging nations,” with its burgeoning tech sector and outward-facing trade policy. But that facade of capitalist advancement hides an increasingly uneven social landscape. Child laborers bear the brunt of a predatory labor system, but their suffering represents a crisis afflicting the whole economy.

More than mandates are needed to keep kids in school and to overturn the economic structure that tethers parents and children to a form of exploitation that is simultaneously ancient and alarmingly contemporary.

The lost opportunity of the Child Labour Act isn’t just that it fails to comprehensively ban the worst forms of child exploitation, but that it assumes growth alone will lead India to overcome child labor. The real cost of pursuing growth above all else may be paid with the wasted potential of the next generation.