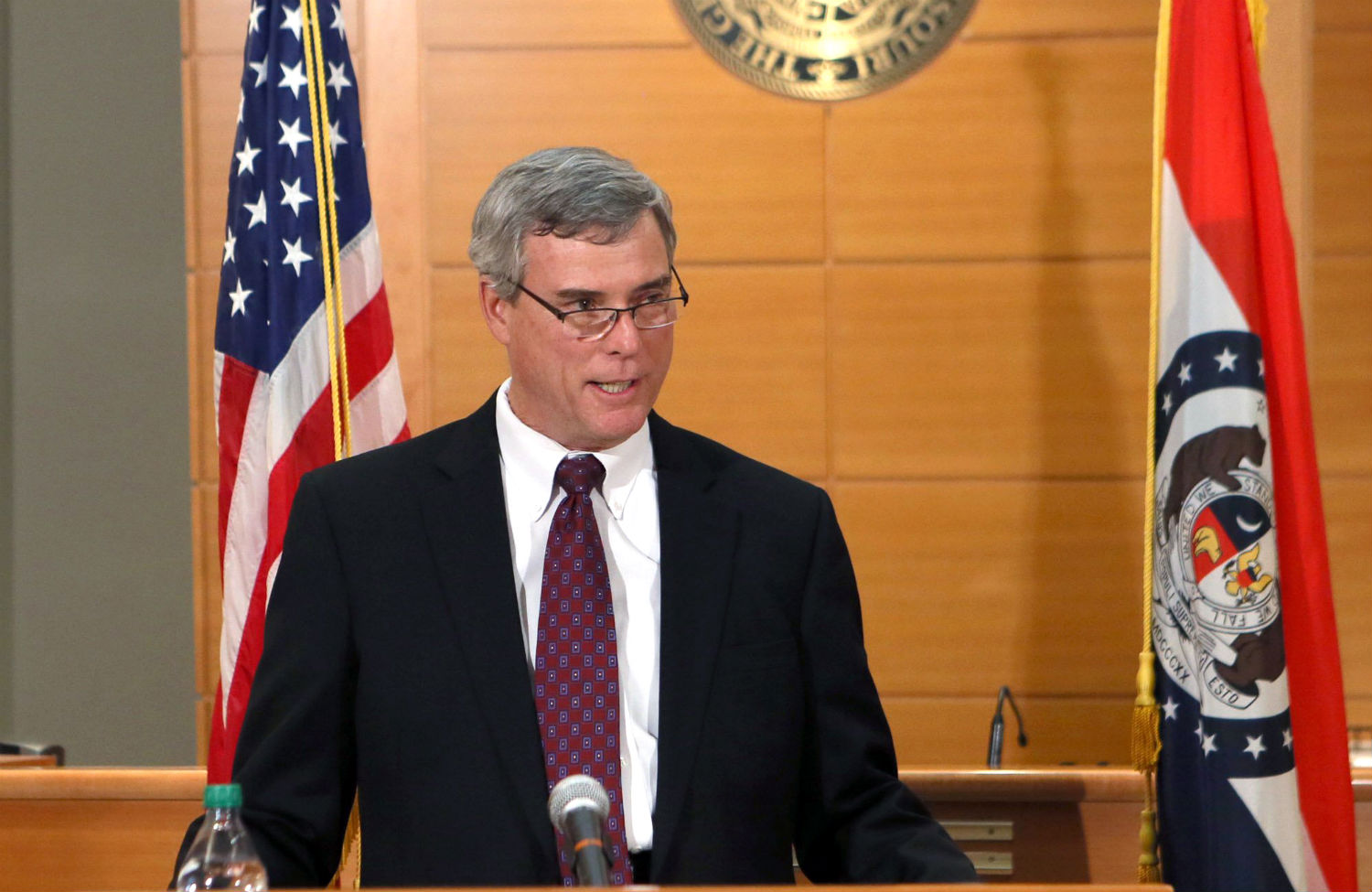 After a grand jury refused to bring charges against Ferguson, Missouri, police officer Darren Wilson in the August 9 shooting death of the African-American teenager, an attorney for the Brown family told the Associated Press, “We said from the very beginning that the decision of this grand jury was going to be the direct reflection of the presentation of the evidence by the prosecutor’s office.”

Long criticized for failing to adequately investigate complaints about the police, and for failing to demand accountability in cases of officer-involved shootings, McCulloch’s approach to the grand jury inquiry was the subject of concern from the start. And the prosecutor sparked anger at the finish by delaying the announcement of the grand jury’s decision deep into Monday evening. The prosecutor seized his prime-time platform to delivera rambling and frequently defensive forty-five-minute speech. He went on and on about aspects of the case. Yet he failed to mention that Brown was unarmed when he was killed.

“Robert McCulloch, who is widely viewed in the minority community as being in the pockets of the police, made matters infinitely worse by handling this sensitive investigation in the worst possible way,” argued a New York Times editorial, which concluded:

Under ordinary circumstances, grand jury hearings can be concluded within days. The proceeding in this case lasted an astonishing three months. And since grand jury proceedings are held in secret, the drawn-out process fanned suspicions that Mr. McCulloch was deliberately carrying on a trial out of public view, for the express purpose of exonerating Officer Wilson.

If all this weren’t bad enough, Mr. McCulloch took a reckless approach to announcing the grand jury’s finding. After delaying the announcement all day, he finally made it late in the evening, when darkness had placed law enforcement agencies at a serious disadvantage as they tried to control the angry crowds that had been drawn into the streets by news that the verdict was coming. Mr. McCulloch’s announcement sounded more like a defense of Officer Wilson than a neutral summary of the facts that had led the grand jury to its conclusion.

This is strong criticism.

What has not been much discussed is the fact that McCulloch is a Democrat—a member of the same party as President Obama, Missouri Governor Jay Nixon and Congressional Black Caucus chair Marcia Fudge, the Ohioan who on Monday evening referred to the failure to bring charges against Wilson as “a slap in the face to Americans nationwide who continue to hope and believe that justice will prevail.”

Across America, counties elect top law-enforcement officials as state’s attorneys, district attorneys and prosecuting attorneys. Hundreds of them are Democrats. Some, like Kings County (Brooklyn) District Attorney Ken Thompson and Bronx County District Attorney Robert T. Johnson, have impressed progressives by taking bold stands and developing innovative policies on everything from the drug war to the death penalty to gun violence and domestic abuse. Former San Francisco District Attorney Terence Hallinan, a “wild Irish rogue” who was arrested sixteen times as a civil rights campaigner before his election to the DA post, often clashed with the police on accountability issues during his tenure.

But there are plenty of Democratic prosecutors who are indistinguishable from their Republican counterparts. Placing a “D” next to the name of a prosecutor does not make that prosecutor a progressive, or even a moderate. Some of the most controversial prosecutors in the country are Democrats. For instance, Brooklyn’s Thompson won his post in 2013 by beating incumbent DA Charles Hynes in a Democratic primary campaign, during which The New York Times noted that Thompson accused Hynes “of remaining passive on issues important to minority communities, like stop-and-frisk policing.”

As the elected prosecutor in suburban St. Louis County since 1991, McCulloch is a powerful player in Missouri Democratic politics. He has delivered sought-after endorsements to prominent figures such as Claire McCaskill, who had the prosecutor’s support when she challenged a sitting Democratic governor in 2004 and who is now Missouri’s senior senator. In August of this year, McCulloch helped a white challenger mount a successful Democratic primary challenge to St. Louis County Executive Charlie Dooley, the first African-American to hold the position. On the same day, McCulloch, who is white, easily saw off a Democratic primary challenge from Leslie Broadnax, an African-American attorney and municipal judge.

The primary came just before the killing of Michael Brown. As protests filled the streets of Ferguson, community leaders argued that McCulloch—because of his long history of maintaining close ties to the police in suburban St. Louis County—should hand off the case. “Many community members don’t believe he can be fair and impartial,” explained state Senator Jamilah Nasheed, a St. Louis Democrat who led a drive that collected tens of thousands of signatures on petitions calling for the appointment of a special prosecutor.

McCulloch balked at that request, as did Democratic Governor Nixon. There was no real chance to defeat McCulloch at the polls in the fall, as he ran without Republican opposition. Yet, thousands of St. Louis County voters refused to vote for the incumbent. In Ferguson, for instance, 10,645 voters went to the polls on November 4. Almost all of them cast ballots in races for county executive and county assessor. But rather than vote for the unopposed McCulloch, Ferguson voters cast more than 1,000 write-in ballots and another 3,000 voters simply skipped the race.

For his part, Republican Stream declared, “Mr. McCulloch had a chance to step aside and frankly it would have removed all doubt about having a fair and independent investigation.” The Republican went further, endorsing a proposal to name special prosecutors to handle all cases of officer-involved shootings. He also campaigned in the African-American community and promised to promote diversity in his appointments.

That wasn’t enough to reverse voting patterns altogether. But it shook the process up; notably, the Democratic vote for county executive in Ferguson dropped twenty points, from 2010 to 2014. “There was a significant falling off of Democratic performance at the top of the ticket,” said Mike Jones, an ally of the coalition effort. “And you have to argue that didn’t happen by accident.”

Elections for local positions should not happen by accident. And that goes double for key law-enforcement posts.

The case for the election of prosecutors is a strong one. Prosecutors have immense authority over the lives of citizens, and citizens should be able to hold those with authority over their lives to account. But for this political process to work, it is important to move beyond simplistic assumptions about Democrats and Republicans, and to seriously assess the records and the promises of candidates from both parties.

It is vital to take primary elections seriously. And it is important to recognize the value of independent and third-party challenges to the two-party status quo.

Media and political elites tend to focus on top-of-the-ballot races for president and governor and senator. But, if the experience of Ferguson and St. Louis County teach us anything, it is that at the bottom of the ballot, in races for local law-enforcement posts, the most fundamental choices are made.