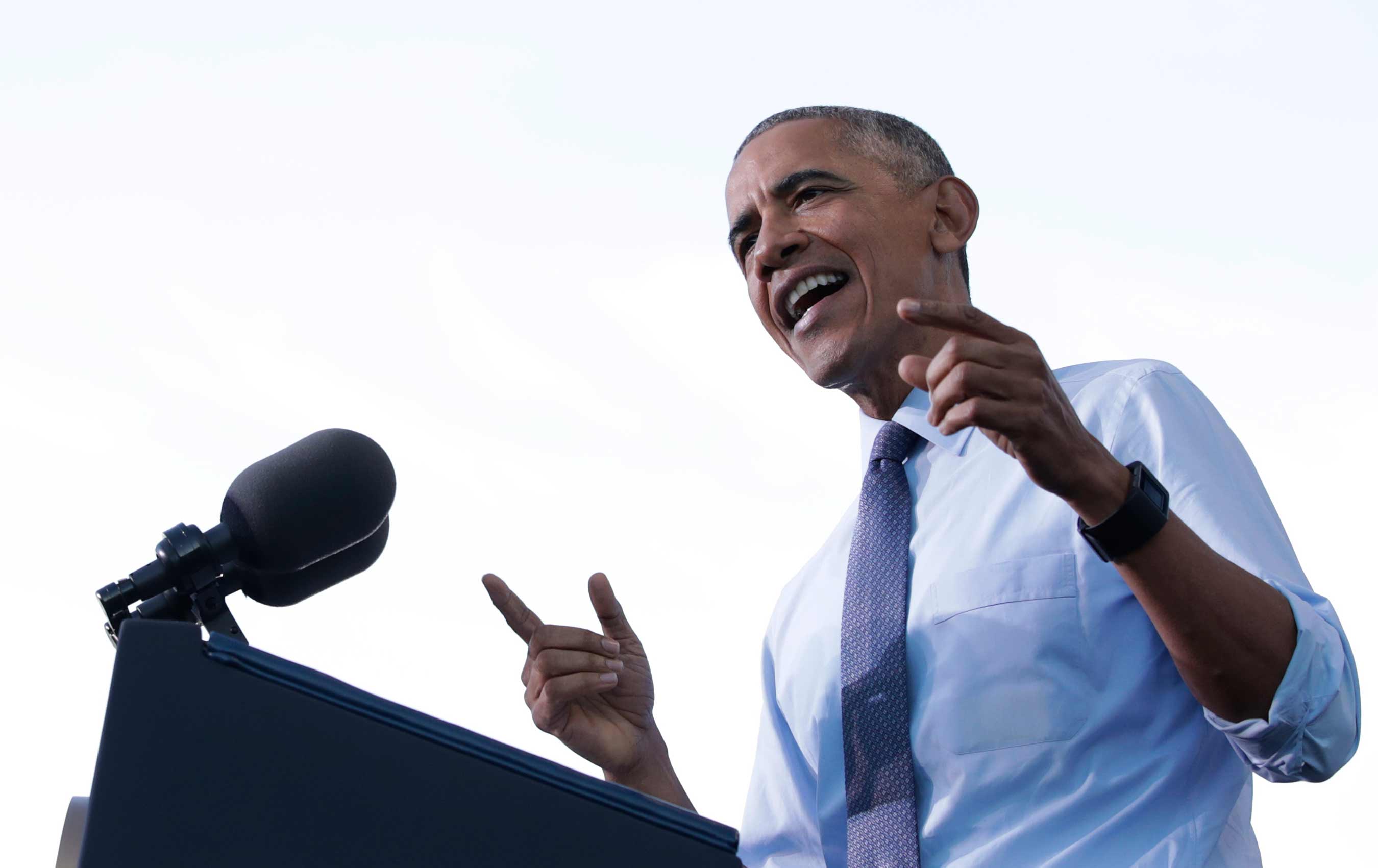 Greensboro, North Carolina— President Barack Obama had just relaxed into the warmth of an adoring crowd, part of his sentimental “Say goodbye to me, say hello to Hillary” tour, when the first hecklers emerged Tuesday night. He’d been joking about making sure Bo and Sunny hadn’t “destroyed any carpets,” because “we wanna get our security deposit back,” and the audience was leaning in for an informal, intimate speech from the man who one woman behind me called “my boo.” Then two people burst from the crowd and headed toward the president, taking off their shirts to reveal “Bill Clinton RAPIST” scrawled on tank tops underneath.

The pair, one man and one woman, screamed the same slogan. (I’m pretty sure the woman’s shirt also read “infowars.com” in small letters below, a nod to the wingnut Web site that had offered $5,000 to hecklers who’d disrupt Clinton and her surrogates on the campaign trail.) Police and Secret Service swarmed and escorted the two to the exits, as a now fired-up crowd chanted “Hillary!” Obama remained calm, joking that “it takes all kinds,” and suggesting, “They’re auditioning for a reality show.”

At that point the president moved on to his argument: Under his administration, which Clinton loyally served, “incomes are rising, poverty is falling, across America you can marry whoever you love.” He riffed: “No wonder I got so grey, we’ve been busy,” then adding that Michelle “still thinks I’m cute.” Again he was interrupted by a Clinton hater. “Try to get your own rally,” he needled as the man was escorted out. “If you can’t get your own rally, don’t go messing up someone else’s rally.”

I came to Greensboro to watch the president fire up the state’s mostly African-American base for Clinton, which he did. (If you want to see the two-minute version of his case, watch this video.) But I also got to see our first black president personally confront the racist backlash politics his presidency inspired—the Trump insurgency—in its latest iteration: the sexist harassment of Hillary Clinton, in this case rubbing her nose in her husband’s alleged sexual misbehavior. The crudeness of the Trump louts only made the president’s case against him sharper, angrier—and at times more hilarious. “The guy says stuff nobody would find tolerable if they were applying for a job at 7-Eleven,” he told the crowd. He mocked Trump supporter Alex Jones for saying he and Clinton were devils who even “smell like sulfur.” He sniffed his own hand and laughed. “Ain’t that somethin’?” The crowd roared.

But Obama was grim and serious about the Trump threat, too. “When in the middle of a debate you threaten to put your political opponent in jail, that—no trial, no indictment, no lawyers…,” Obama said. “When you welcome Russian meddling in our electoral process, then you’re disregarding not just things like facts, or evidence, or a free press, but you’re chipping away at basic values like tolerance and due process and mutual respect.”

With genuine anger, Obama told the crowd Trump “doesn’t have the temperament, or the judgment, or the knowledge, or apparently, the desire to obtain the knowledge, or the basic honesty that a president needs to have,” adding, “And that was true even before we heard about his attitude toward women.”

Interestingly, the president took up the horror of Trump’s Access Hollywood remarks in the context of his campaign-long assault on one group after another. “It was true when we heard what he thought about minorities…Muslims…made fun of disabled persons or insulted Gold Star families,” he said. “You don’t have to be a husband or father to say, ‘That’s not right.’ You just have to be a decent human being.”

Greensboro is one of the hallowed spots of the modern civil-rights movement, the place where four North Carolina A&T University students sat down at a Woolworth’s counter, on February 1, 1960, and refused to leave without being served (the counter closed instead, inspiring a sit-in movement across the South and spurring the formation of the Student Non-Violent Coordinating Committee). Last month, Trump requested to use the International Civil Rights Museum—on the grounds of the old Woolworth’s building, with the historic counter intact—for a photo shoot and a possible campaign commercial, and officials rejected the request, which would have closed the museum to other visitors. The museum has since been besieged with racist phone calls and threats of violence. Earlier in the day, the president had visited the A&T campus to shoot a forum with ESPN’s The Undefeated, talking about race, culture, sports, and history.

Those were strong words from our calm and often conciliatory president. I checked in with Rev. William Barber II, the head of the state’s NAACP and the founder of the Moral Monday movement, which has morphed into a movement for national revival. Barber’s national work had taken him out of North Carolina for Obama’s visit, but he e-mailed me his thoughts about the election and the recent Republican defections in the wake of Trump’s comments.

“As an evangelical Christian, I am deeply disturbed by the hypocrisy of the outrage at Trump’s comments on sexual assault. Yes, it is outrageous for anyone to talk the way he did about another human being. But the violence of the Trump tape isn’t new. What’s new is that the woman he was talking about looks like the wives and daughters of the white men who’ve rallied the religious right behind Donald Trump,” Barber wrote me.

“When Trump promised a wall to keep out Mexicans, many who are now ‘outraged’ cheered him on,” Barber continued. “When he pledged to ban all Muslims from traveling to America, they celebrated his defense of ‘religious freedom.’ When he supported voter suppression laws that sought to abridge the right to vote for African-Americans, Latinos and poor people, they stood with him. But now he has gone too far?”

I’ve heard that a lot from African-American voters in the last few days: They’re horrified by the Access Hollywood tape, but wonder why it took that horror for Republican senators like John McCain and John Thune to rescind their endorsements, or for House Speaker Paul Ryan to declare he won’t campaign for Trump and will urge his members to treat the nominee however they think helps them in their races for reelection (there’s a profile-in-courage moment). The notion that this is what disqualifies Trump, his crude comments about white celebrity-television and soap-opera stars, is irritating to some black voters, to say the least.

Clinton herself addressed that sentiment, subtly, in her debate performance Sunday night. “It’s not only women, and it’s not only this video that raises questions about his fitness to be our president,” she told the audience. “Because he has also targeted immigrants, African-Americans, Latinos, people with disabilities, POWs, Muslims and so many others. So this is who Donald Trump is.” She went on to attack Trump’s “racist” crusade to get the president to show his birth certificate. Obama did the same thing in Greensboro, placing Trump’s disgusting comments in the context of 16 months of “racism and misogyny” that goes back to Trump’s peddling, in Obama’s words, “crazy stuff like I wasn’t born here, or like I’m a Muslim.”

The dazzled crowd hung on every word. The arena where Obama spoke held 7,700, a huge proportion of them college students and other millennials; at least 1,500 people had to be turned away. Clinton volunteers were everywhere, registering voters as well as signing people up for shifts doing get out the vote and other tasks. I talked to an A&T senior who’s on the school’s venerated drum line, who preferred not to give me his name, who said he hadn’t known “much about [Clinton] except what they say about her on TV.” Obama had “opened my eyes,” he told me. “He really wants to help her win.” He’ll vote for Clinton, he said, as will the hundreds of students in attendance.

“This is a really historic moment, and the president set it up for Hillary in a positive way,” said Todd Cheek, a Greensboro native who recently moved his personal-training business home from New York to be closer to his parents, who accompanied him to the Obama event. Now in a pivotal swing state, will he vote for Clinton? His mother answers quickly: “Of course we will!” speaking for her son and husband, who both laugh and agree.

This heavily millennial crowd was fired up, but as always, Clinton’s—and Obama’s—most passionate supporters were just like Cheek’s mother: older black women. They came in their Obama gear from 2008 and 2012 and bought Hillary 2016 hats, as well as locally made bags featuring glowing photos of the first family, back when Malia and Sasha were new to the White House. And they lingered in the crowd as others headed for the exits, signing up for GOTV shifts on the clipboards Clinton volunteers passed around. As Obama’s motorcade could be seen ferrying the president out of Greensboro, a woman yelled wistfully, “Bye, Boo!” into the cool night air.