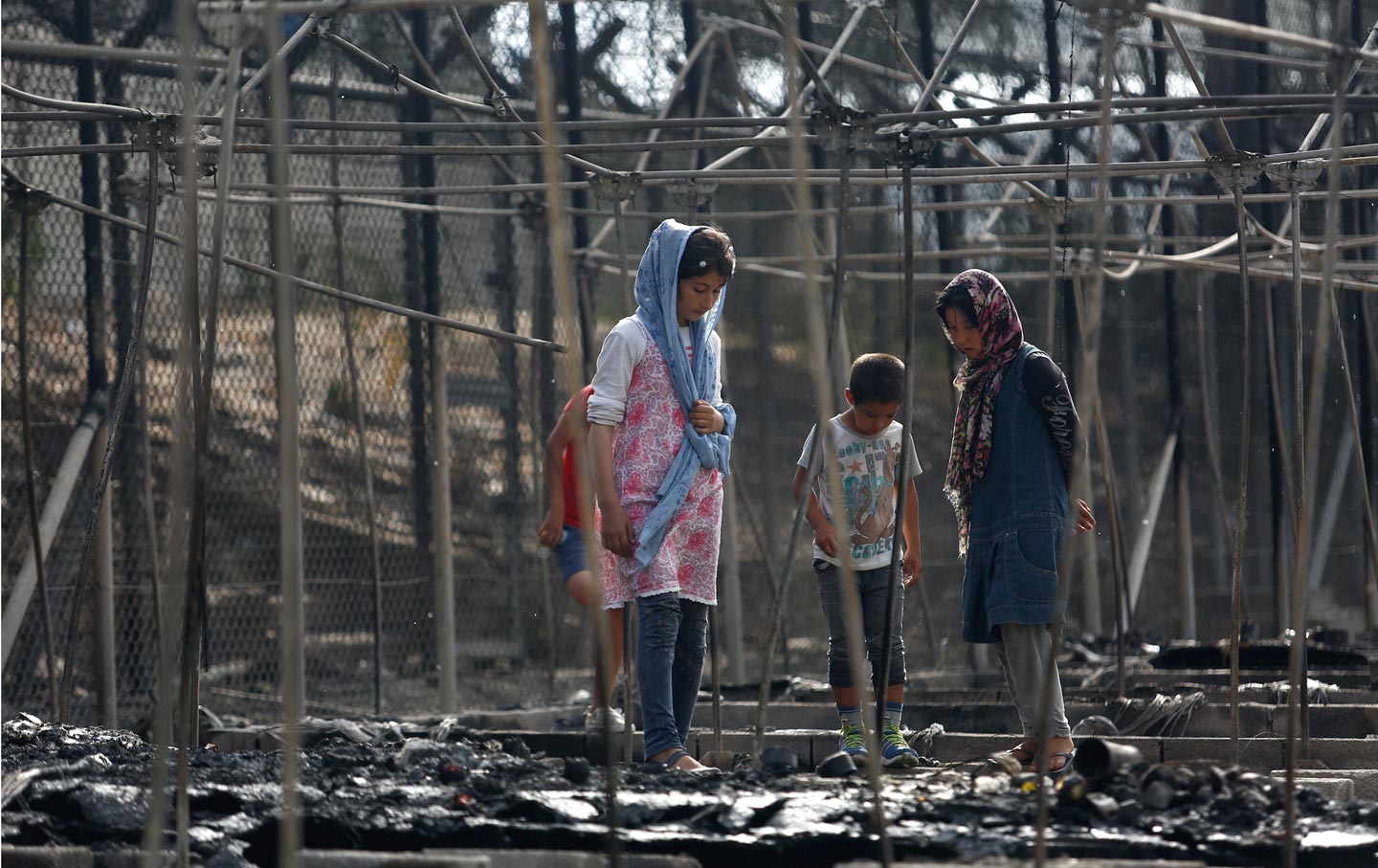 Migrants stand among the remains of a burned tent at the Moria migrant camp on the island of Lesbos, Greece. (Reuters / Giorgos Moutafis)

Nea Kavala, Greece— “We weren’t expecting to be here very long,” Ayhan, a 28-year-old from Afrin, Syria, says, as she sits with her husband, Hozan, on a porch made of wood pallets outside their modest tent in the Nea Kavala refugee camp in northern Greece.

“I only have two changes of clothes,” she continues, pouring coffee into a row of baby-food tins that have been repurposed as coffee cups for impromptu guests. “What I’m wearing right now, and what I wore when I crossed the sea in February.”

Everything was going smoothly until the recently married couple reached the Macedonian border in March, and were told to wait in the Greek town of Idomeni—at the time, a sprawling refugee camp full of people trying to cross the border. Eventually, they were told that the border was closed and were evacuated to Nea Kavala—a former Greek military base outside the small northern town of Polykastro. Now, they are sharing a modest tent with Ayhan’s uncle, Mohammed; his wife, Alaa; and their two daughters. Occasionally they receive visits from a local red-haired stray cat, which they have jokingly named Angela Merkel.

“It was all so chaotic,” Hozan chimes in animatedly, recalling how, immediately after marrying, the couple made a snap decision to try their luck moving to Europe, due to the worsening political climate for Kurds in Turkey—where they had originally sought refugee after fleeing from Afrin, a Kurdish-majority Syrian town. Hozan thought that it was only a matter of time before the escalating violence in Turkey affected them, as Syrian Kurds.

“We thought by now we would be continuing our lives in Germany. But instead we are here.”

“We thought by now we would be continuing our lives in Germany,” he continues, shrugging and smiling despite the absurdity of the situation. “But instead we are here.”

Over the past year, what it means to be a refugee in Greece has changed drastically. This time last year, it was a transit point; tens of thousands were passing through Greece on their way to Germany, where German Chancellor Merkel had just suspended the Dublin regulations, a controversial EU stipulation that asylum seekers must apply for asylum in the first EU country they enter—making Germany the promised land, and Greece merely a stop along the way. Shortly thereafter, the European Home Affairs Committee passed a measure to resettle 120,000 refugees from Greece and Italy to 28 countries across the European Union, further fueling the European dream.

One year later, only about 5,000 of the promised 120,000 have been resettled. The need for asylum slots has multiplied since the borders through the Balkan countries have closed, with 57,000 refugees—like Ayhan and her family—who have been stranded in Greece for at least six months.

“I just can’t believe that this is Europe. Lebanon, Jordan—OK, you have people living in tents. But Europe?”

“I just can’t believe that this is Europe,” Ayhan continues, as Angela Merkel—who has arrived for a visit—rubs up against her leg. “Lebanon, Jordan—OK, you have people living in tents. But Europe?”

While the United Nations High Commissioner for Refugees (UNHCR) encourages refugees to apply for asylum as quickly as possible, there is no way to do so in Nea Kavala. In order to arrange interviews or receive updates, refugees must either make the hour-and-a-half-long journey into Thessaloniki—which requires bus or taxi fare from the remote camp, plus navigating a language barrier and other bureaucratic hurdles, or else using Skype with the Greek officials. But with limited electricity and tenuous cellphone reception, this method has proven to be equally cumbersome.

“The connection was so bad, we could barely talk to each other,” Mohammed, said, shaking his head, recalling his experience trying to arrange for a second interview. “I really have no idea what is going on.”

Those who have enough money have turned to smugglers, who come to the camp at night in search of clients who can afford to bypass the asylum process. For a minimum of 2,500 euros, refugees can circumvent the otherwise sealed Macedonian border. Many have opted to do this—over the past four months, the camp’s population has depleted from 3,500 to just around 500, with an unknown number choosing to be smuggled north while others have been moved to other camps.

Those left behind are at the mercy of the system.

“Do they not want us in Europe because they think we are terrorists? Let me tell you—they’ve already left to Europe.”

“Do they not want us in Europe because they think we are terrorists?” Mohammed, 40, asks, frustrated. “Let me tell you—the terrorists?” he continues, pointing to the empty plot of land that used to house other refugees. “They’ve already left to Europe.”

Living in a hastily constructed transit camp for over six months also means coping with the passage of time, with little activity—besides waiting on scraps of news and rumors—to fill the days. Everyone is bored. Though residents can technically come and go from the camp as they please, few have enough money to leave.

“We try to learn a little bit of English, or a little bit of German from the volunteers,” Ayhan says, about the activities available within the camp. “They want us to learn Greek—but I don’t want to. I want to leave.”

As more time passes, people are running out of money. Some have turned to illegal activities—smuggling and reselling everything from Macedonian cigarettes to drugs. Gangs have sprung up throughout the more than 50 camps across Greece, protecting these enterprises while segregating loyalties along ethnic lines. Frustration is everywhere. Just this week, there was a catastrophic fire in Moria, the reception center-turned-refugee camp that many first arrive to on Lesbos after crossing the sea from Turkey. A handful of refugees set the fire in protest after hearing rumors that there would be mass deportations to Turkey. Now, thousands are sleeping in the streets.

Dealing with the elements in the flimsy infrastructure of an outdoor camp like Nea Kavala is also proving to be a challenge. During the summer, flies and mosquitoes were swarming, biting people and festering in the food supplies.

“All of our children look like this,” Alaa, Mohammed’s 35-year-old wife, tells me, lifting one of her daughter’s shirts to reveal large, swollen bites on her stomach.

“We have to throw out half of our food because it is covered in flies,” she continues. “We don’t have very much to begin with, but it isn’t edible like this.”

With the changing of the seasons will come additional challenges. Last week, heavy thunderstorms caused several tents to collapse. Those that remained standing were flooded with up to three inches of water and mud. With only one blanket allocated per person—and several soaked in rainwater—many found themselves suddenly sick, shivering and dreading the upcoming winter.

“Some were taken to caravans, or hotels,” Alaa continues, speaking about the mass evacuations from the Idomeni border. “We were sent to live in tents inside of this camp. It isn’t fair.” (The hotels, abandoned as one casualty of the Greek economic crisis, have been re-appropriated for refugees, and the campsites have more protective caravan-style shelters.)

As the 71st annual United Nations General Assembly—this time with the first-ever Refugees Summit—meets in New York to discuss global solutions to the refugee crisis, Mohammed and his family are skeptical about another series of broken promises coming from the great powers. For now, they hope to be transferred to a caravan-style camp, where they can at least wait out the winter months more comfortably as they await news on their asylum applications.

“Right now, I want my family to be more comfortable,” Mohammed says, musing for a moment on what he would ask politicians and policy-makers if given the chance. “Maybe then we would stop thinking so much about what would happen if we went back to Syria.”