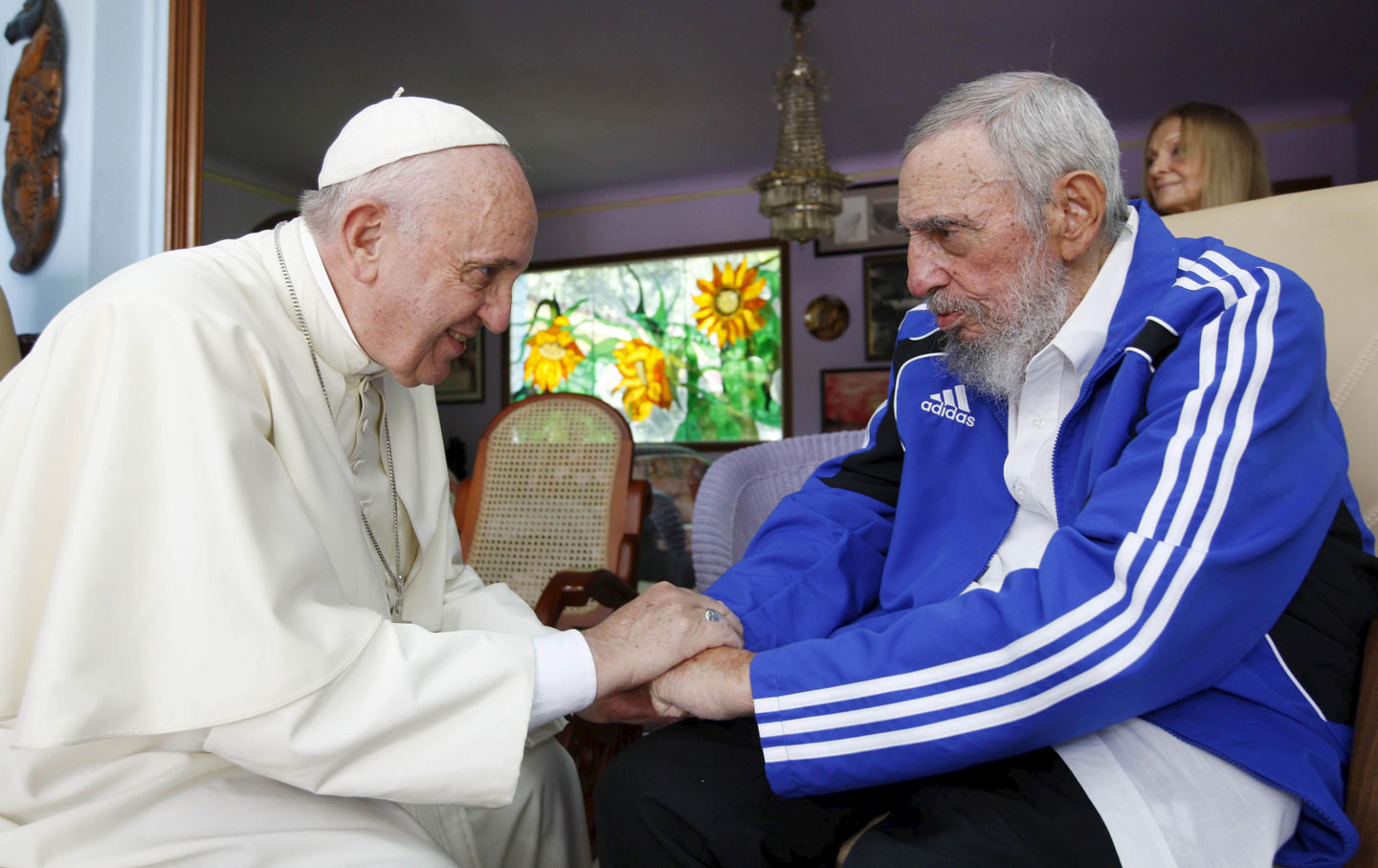 Pope Francis arrived in Cuba on Saturday, and these images, including the pontiff’s meeting with Fidel Castro, are saturated with history. Here we have an Argentine, “Peronist” pope—born just eight years after Ernesto “Che” Guevara, his compatriot and Castro’s revolutionary comrade—celebrating an enormous, open-air mass under an iconic image of Che and attended by the Argentine president, Cristina Fernández de Kirchner. In a way, the pope’s visit baptized the beginning of a new era—what should be called not the “normalization” of Washington-Havana relations but rather the normalization of the United States’ perverse half-century obsession with Cuba—one that the pope himself was instrumental in bringing about. In The Washington Post, R.R. Reno, who is editor of the arch-conservative and anti-Jesuit First Things, says that “Francis himself is attracted to clerical special ops,” and his secret diplomacy between Havana and Washington was Kissinger-worthy (except of course most of Kissinger’s machinations greatly increased the world’s share of misery).

Added to the history is the fascinating AFP interview with Che’s daughter Aleida Guevara just before Francis’ arrival on the island, in which she said she wasn’t going to attend the mass. Most Spanish and English sources only reported the part where she complained about the government’s urging people to attend as “party work.” “Here,” she said, “there is freedom of belief and I don’t believe.” Harder to find in coverage of the interview is that Guevara accused the Catholic Church of being “complicit in the assassinations and disappearance of more than 30,000 Argentines” during that country’s military dictatorship. Francis himself, then known as Father Jorge Bergoglio, has a murky history during that period—accused of not doing enough to protect priests tormented by the junta—which one of his biographers identifies as provoking a moral crisis in the pope that transformed his politics. Guevara alludes to this in her interview: “I don’t know where the pope was during this moment. What did he really do? I don’t know.”

A further irony is that the pope has decided to use Cuba—long the object of US invasion and occupation—as the staging ground for what the right in this country describes as an ideological assault on American exceptionalism and on the individual supremacy that underwrites that idiocy. Conservatives in this country will undoubtedly issue a series of increasingly absurd comments protesting his visit. Latin America’s tradition of social democracy and social rights stands in sharp contrast to their increasingly unstable and dangerous faith in individual rights (which is what is at stake in their hatred of Latinos).

Pope Francis and Fidel Castro share more than a long, intertwined political history. Both represent, in their own way, the New Left’s wrestling with the relationship of law to spirit. Castro, after winning his revolution, institutionalized the power of the Communist Party, but, as I wrote a while ago in this review of his (quasi) autobiography, is best thought of as embodying the post-war revolt against form, against what had become, by the time he came of political age, the old left’s narrow legalism and economism. Pope Francis, too, at least according to First Things’s Reno: “dislikes preoccupation with ritual and at times can give the impression that basic rules for Catholic life can be broken. He has flouted many of the rigid papal protocols, starting with his decision not to live in the papal palace. This seems like a progressive approach, but the rulebreaking needs to be seen as the flip side of Francis’s constant call for a deeper encounter with Christ. Francis seeks to make the Jesuit ideal universal for the church: a profound, interior obedience to God that frees us to adopt a flexible attitude toward exterior obligations.”

And so the New lLeft continues, in its way, to influence. Harvard historian Samuel Moyn, also at the Post, rightly identifies the pope’s position on social and environmental justice as part of a global realignment, against the atomizing and defensive posture of “human rights” toward a more forward, proactive analysis of structural exploitation and demands for collective and economic justice. Moyn writes: “This need to turn to our structural problems—not the defense of individual rights alone—came through even more strongly in his summer encyclical on the environment.” I think this is absolutely correct, part of a large ideological realignment that is taking place in the world.

The only thing I would add is to emphasize the vanguard role (both back in the 1940s and 1950s when Fidel and Francis were coming up and, more recently, with this century’s return of a social democratic left) that Latin America has played in this realignment.