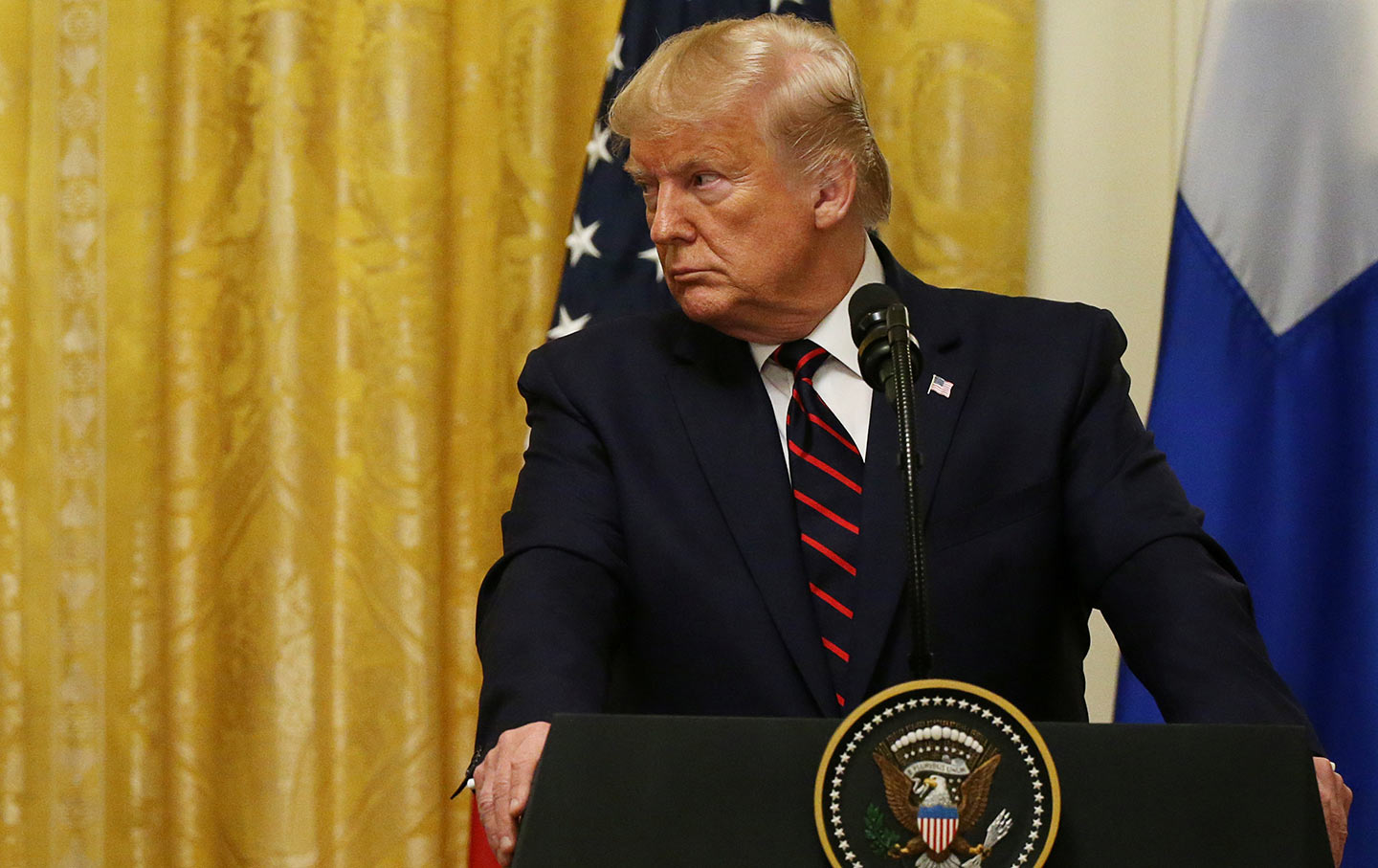 Donald Trump came completely unglued twice on Wednesday. But pay no attention to the man behind the meltdown. All the real action in his rapidly escalating impeachment crisis took place outside the White House. (We are all Finnish President Sauli Niinistö, however.)

Wednesday morning, after ducking the question repeatedly, Secretary of State Mike Pompeo admitted he was on Trump’s thuggish phone call with Ukrainian President Vlodymyr Zelensky in July. But you had to be paying close attention to catch it, given the way Pompeo rushed through and eventually swallowed the admission: “Was I on the phone callIwasonthephonecall.” Just after that, House Intelligence Committee chair Adam Schiff said that rather than merely going to court over Pompeo and other Trump toadies’ stonewalling subpoenas, he would wrap the many counts of defiance into articles of impeachment, under “obstruction of justice.” The day ended with a Washington Post bombshell showing how Trump used Vice President Mike Pence in his efforts to pressure Zelensky to “investigate” Hunter Biden. Team Pence, uncharacteristically, pushed back on Team Trump’s claims.

Schiff’s threat might be most significant. Any White House action to “stonewall” the impeachment inquiry “will be considered further evidence of obstruction of justice,” he said in a crowded press conference. “We’re not fooling around here, though. We don’t want this to drag on months and months and months, which appears to be the administration’s strategy.”

Finally, Democrats are acting quickly in the face of GOP defiance—and I hope they target some of the major players who ignored subpoenas to testify about Robert Mueller’s revelations last spring, especially former White House counsel Don McGahn, who was reportedly asked by Trump to tell then–Attorney General Jeff Sessions to un-recuse himself from the Russia probe—and then told to tell the media he was never asked any such thing. 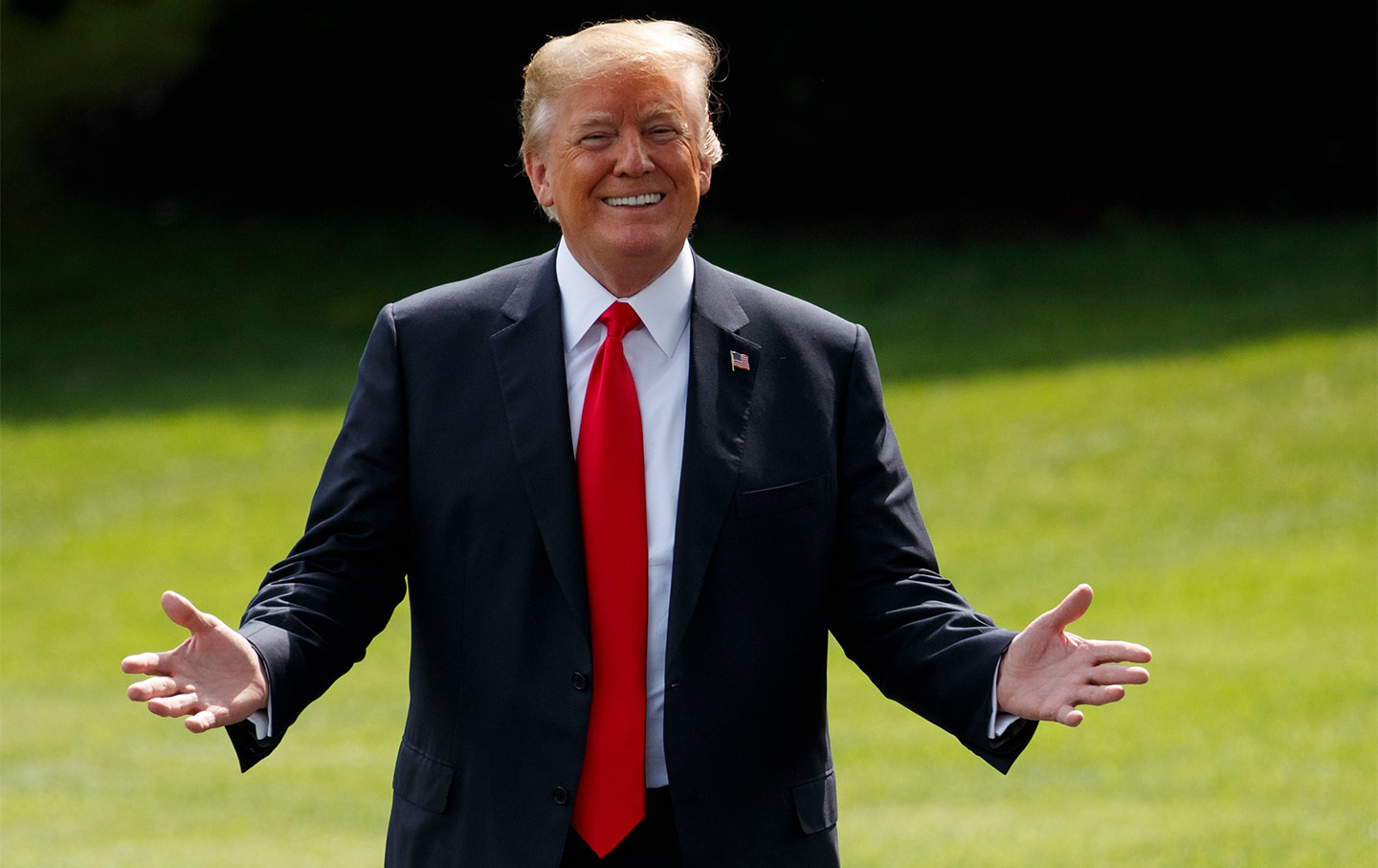 Meanwhile, things got worse for Pompeo and Pence. The knives are coming out for the secretary of state: Officials at the CIA, which he previously ran, leaked that he was widely despised for abusive behavior, including throwing binders at subordinates, and that his security detail threw an “Emancipation Party” when he left. And while Pompeo insisted Schiff and the Democrats were harassing State Department employees with subpoenas and requests for information about the department’s role in Trump’s Ukraine shakedown, reports emerged that some of those employees are approaching Democrats to volunteer to testify. Former envoy Kurt Volker will testify behind closed doors Thursday; harassed and dismissed former ambassador to Ukraine Marie Yovanovich, whom Trump called “bad news” and whom he appeared to threaten on his call with Zelensky (“She’s going to go through some things,” he said, like a mob boss) will do so next week.

But The Washington Post’s Pence scoop best underscored what I argued last week: If Trump goes down, he will take as many Republicans with him as possible. Someone told the Post that Pence’s top national security adviser was on the July 25 call with Zelensky. “White House officials,” the Post added, “said that Pence probably would have received the detailed notes of the president’s call in his briefing book on July 26.” The Trump team also revealed that Pence was asked to underscore the administration’s concern about “corruption”—which was repeatedly defined as the Ukrainian government’s failure to dig up or manufacture dirt on Hunter Biden—when he met Zelensky during his trip to Poland in August.

All of that makes it tough for Pence to insist—as he apparently does—that he knew nothing of Trump’s efforts to get dirt on the Bidens or discredit the Russia investigation. It’s even tougher because The New York Times and The Washington Post have been reporting on Trump and capo Rudy Giuliani’s efforts to get Ukraine to produce dirt on the Bidens since the spring. We already knew Trump was trying to slime Pence as insurance against impeachment: Last week, as the news of his phone call with Zelensky broke, he told reporters, “I think you should ask for VP Pence’s conversation, because he had a couple of conversations also.” Trump is trying to make sure his vice president gets as dirty as he is, so that if congressional Republicans ever begin to locate their spines, they will know that impeaching Trump could put the person behind Pence in the line of succession in the White House: Imagine “President Nancy Pelosi.”

All of this is why I wish the media had paid less attention to Trump’s two White House meltdowns on Wednesday. Sure, there were a few pieces of news in them: He suggested Schiff should be investigated for “treason.” He ended his first rant by insisting, “You have corrupt media in this country and it truly is the enemy of the people”—an escalation from his normal attacks on journalists, I’ll admit. But the rest of his twin tantrums were garden-variety Trump: insulting Schiff with a new nickname (“Shifty”) and ultimately getting off the message he wanted on live (cable) television: “Biden and his son are stone-cold crooked.” Trump is trusting that his base ignores the fact that he’s essentially admitted to his impeachable offenses—withholding Ukrainian aid and pressuring the country’s leader for dirt on a political opponent—and gets that single message about Biden: He’s “crooked.” (He’s not.)

The most newsworthy comment in Trump’s two appearances came from Finnish President Niinistö, who gamely endured Trump’s rage. “You have here a great democracy, keep it going,” he told reporters. Finally, Democrats seem to be doing just that. We need the media to do the same.