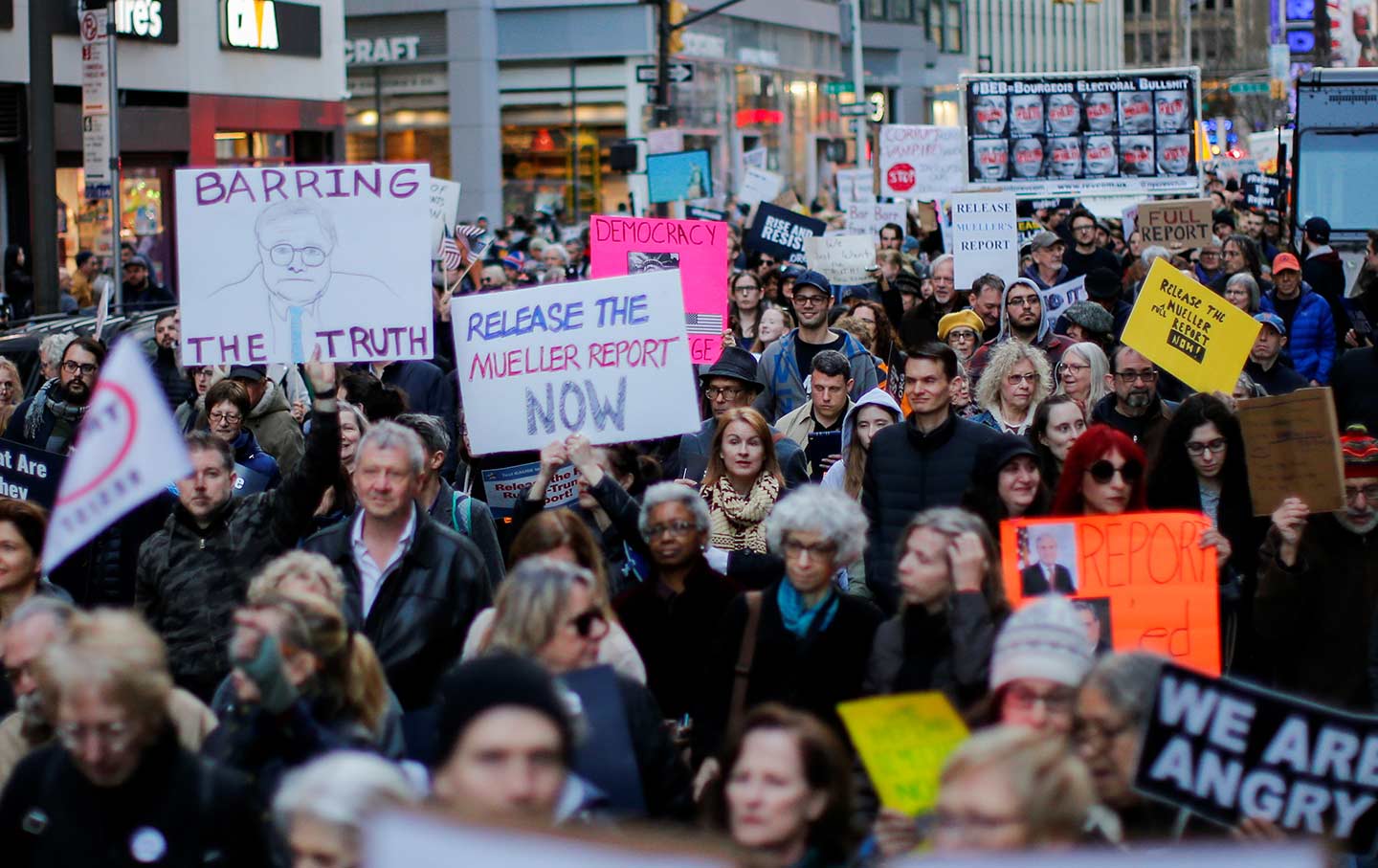 Far from the “complete and total exoneration” claimed by Donald Trump, the 448-page report by special counsel Robert Mueller paints a scathing portrait of a lawless president. The report finds “substantial evidence” that Trump obstructed the investigation and invites Congress to consider how to hold him accountable. The question now is how Congress should respond.

The report details much of what we already knew, including that the Russians did interfere in the 2016 election. But contrary to many liberals’ expectations, the Mueller probe did not find that Trump or his campaign conspired or coordinated with the Russian government. Even so, when the investigation into Russian interference began, the president clearly sought to discredit, impede, and obstruct it. In the words of the report, Trump launched “public attacks on the investigation, nonpublic efforts to control it, and efforts in both public and private to encourage witnesses not to cooperate with the investigation.” The president’s efforts were limited only by his incompetence and the common sense of those aides who refused to follow Trump’s orders to trample the law, choosing instead to ignore his “crazy shit,” as then–White House counsel Donald McGahn phrased it.

Mueller’s report is widely being viewed as an impeachment referral. Indeed, some of the best and brightest progressive leaders in Congress have called for initiating impeachment hearings. Senator Elizabeth Warren was the first of the presidential contenders to do so. Insurgent new congressional stars like Representatives Rashida Tlaib and Alexandria Ocasio-Cortez are pushing an impeachment resolution introduced by Tlaib. Grassroots groups like Indivisible and powerful donors like billionaire Tom Steyer are demanding impeachment hearings as well.

But House Speaker Nancy Pelosi and others in the Democratic leadership are more circumspect. They have not ruled out impeachment but rather argue that the House should take that step only if Trump’s misdeeds are, as Pelosi has put it, “compelling and overwhelming.” She has also noted that “the facts regarding holding the president accountable can be gained outside of impeachment hearings” and that Republican support would be essential for impeachment to have any chance of resulting in a conviction in the Senate.

David Cay Johnston: What Is Trump Hiding in His Tax Returns?

The question of whether or not to impeach is hotly debated in the broader progressive community, including at this magazine. Democrats face political risks in either direction. Failing to impeach Trump could demoralize the very activists and base voters that the Democrats need for a large turnout in 2020. But impeachment on the basis of Trump’s unsuccessful efforts to obstruct an investigation into a conspiracy that never happened could run aground—and generate a backlash that would hurt Democrats next year. It might be wiser for the party to move on from what has come to be known as Russiagate. For over two years, too many liberal voices and Democratic politicians have been focused almost monomaniacally on the 2016 election and Russia’s involvement in it. Pumped up by the media, many Democrats inflated Russiagate into an attack on our country akin to 9/11 or Pearl Harbor, often overshadowing the reality of Trump’s misrule: his turnover of the government to entrenched interests who are rigging the rules against working people, even as he fans racist and nativist fears to distract from their plunder.

Democrats clearly have a responsibility to take up Mueller’s invitation to investigate, particularly given the disgraceful performance of Attorney General William Barr, whose efforts to cover for Trump may win him applause in the White House but will surely earn him disrepute in the history books. The House Judiciary Committee is right to demand access to Mueller’s full, unredacted report and underlying evidence and to hear testimony directly from Mueller himself on the conclusions that his investigation reached. Congressional committees may need to subpoena other witnesses as well.

The key question is whether Trump’s various crimes—his failed obstruction efforts, his conspiracy to violate campaign-finance laws with payoffs to Stormy Daniels and Karen McDougal, his grifter’s use of the White House for personal profit—amount to the high crimes and misdemeanors required by the extreme constitutional remedy of impeachment. Trump must be held accountable, but it may turn out that Pelosi’s earlier conclusion about impeachment—that he is “just not worth it”—makes the most sense in the limited time left before next year’s election. If that’s the case, then Democrats would be wiser to focus on how Trump is abusing the presidency and bring his lawless administration to an end by sweeping him out of office in 2020.