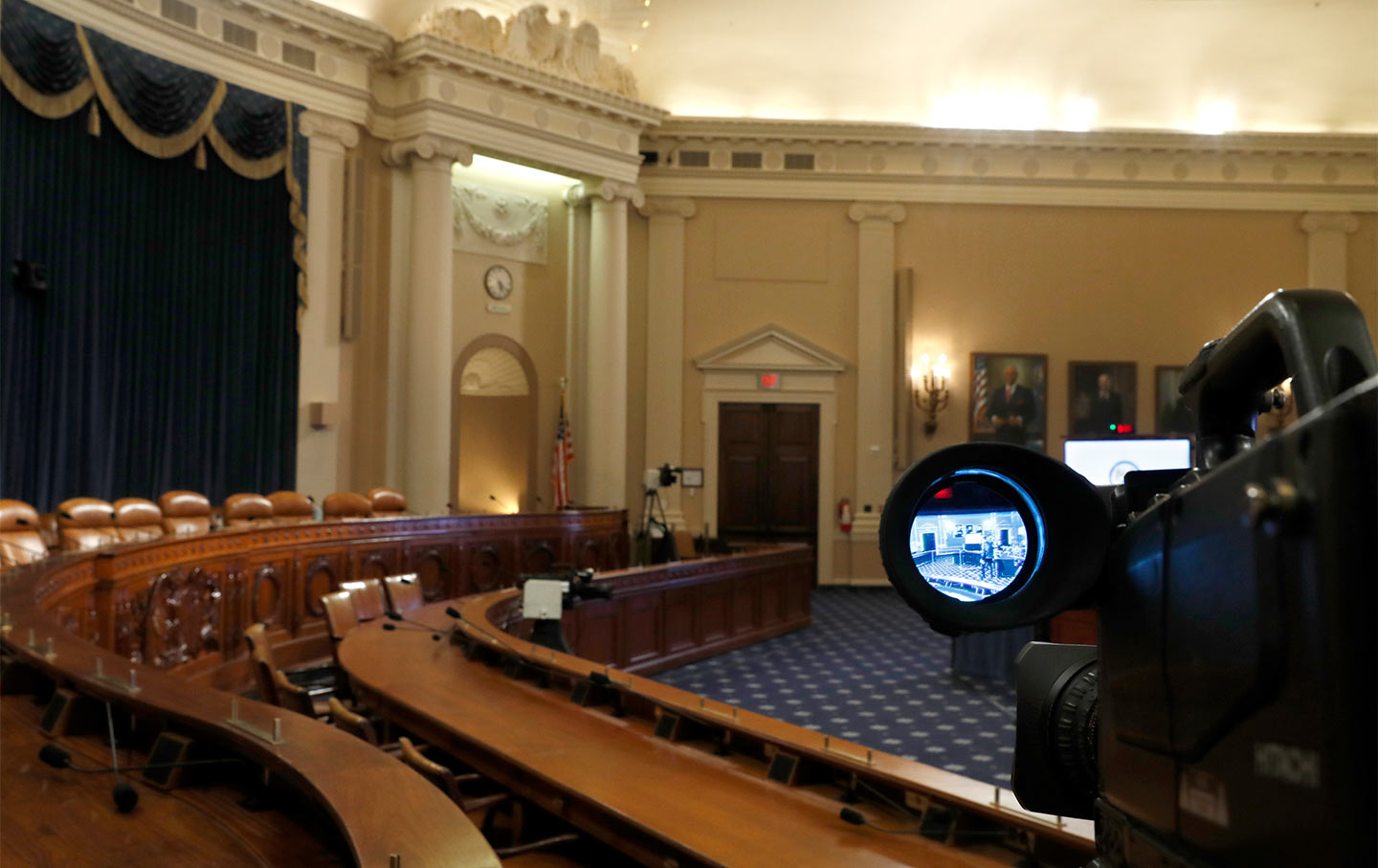 A camera is set up in the House hearing room where the impeachment inquiry will be held. (AP / Jacquelyn Martin)

Impeachment cannot be the fetish or the hobby of a small, highly informed elite. It must be an exercise in popular governance that engages the great mass of Americans, and that invites them to communicate their passions to members of the House and—if the House votes to impeach—the Senate.

To achieve the necessary level of citizen involvement with President Trump’s accountability moment, the American people must have the fullest possible access to deliberations.

This is where a free press comes in.

Impeachment has reached a critical juncture. As hearings begin this week, it is time for radio and television networks—especially the nation’s public broadcasting system—to lean in to their democratic duty.

That duty involves more than just airing congressional hearings live during the day. The networks need to rebroadcast those hearings during prime time, so that Americans who work 9 to 5, or who are otherwise distracted by the demands of the day, can watch them from start to finish. Of course there will be those who do not focus on the process—this is, after all, a country where most people do not vote in most elections, and where even presidential elections see shockingly low turnout levels as compared with other democratic states. But, as Bill Moyers argues, every effort must be made to connect with those Americans who are ready to be a part of this process. Or who may be drawn into it as the hearings, deliberations, debates, and votes progress.

Moyers and writer Michael Winship (the immediate past president of the Writers Guild of America, East) have in recent days been providing Americans with a history lesson regarding media coverage of impeachment:

Over the course of 51 days and nights, millions of viewers watched as the story of the Watergate break-in, the cover-up, payoffs, and dirty tricks unfolded before their eyes. The evidence was undeniable: Richard Nixon, the President of the United States, had abused the power of his office, corrupted the rule of law, lied persistently, and obstructed justice.

Other networks carried the hearings, too, but what set public broadcasting apart was the decision to air them twice a day: live, in real time as they happened, and then via videotape in prime time every evening, when people who had spent all day working could come home, watch the drama play out without intrusive commentary, and become a part of the process of judgement. One viewer wrote: “I arrive red-eyed and sleepy to work and I don’t care.”

Moyers and Winship want PBS stations nationally, on which Moyers appeared as a popular host for decades, to make the same commitment to cover the Trump impeachment. So far, PBS has agreed only to rebroadcast the hearings on a digital subchannel, PBS World, rather than the regular local stations across the country. PBS World, Moyers and Winship point out, is “a place where important programs are sent to die.”

“If PBS were truly an alternative to corporate networks, it would repeat the hearings in prime time for the mass audience,” the duo argues. “Period.”

They’re right. But it shouldn’t stop with PBS.

The corporate networks, which enjoy the enormous benefit of free access to the people’s airwaves via the FCC’s giveaway licensing of their affiliated stations, should be stepping up. And so, too, should major daily newspapers—which might actually break out of their death spirals if they knocked down some paywalls and gave readers no-cost online access to impeachment coverage. 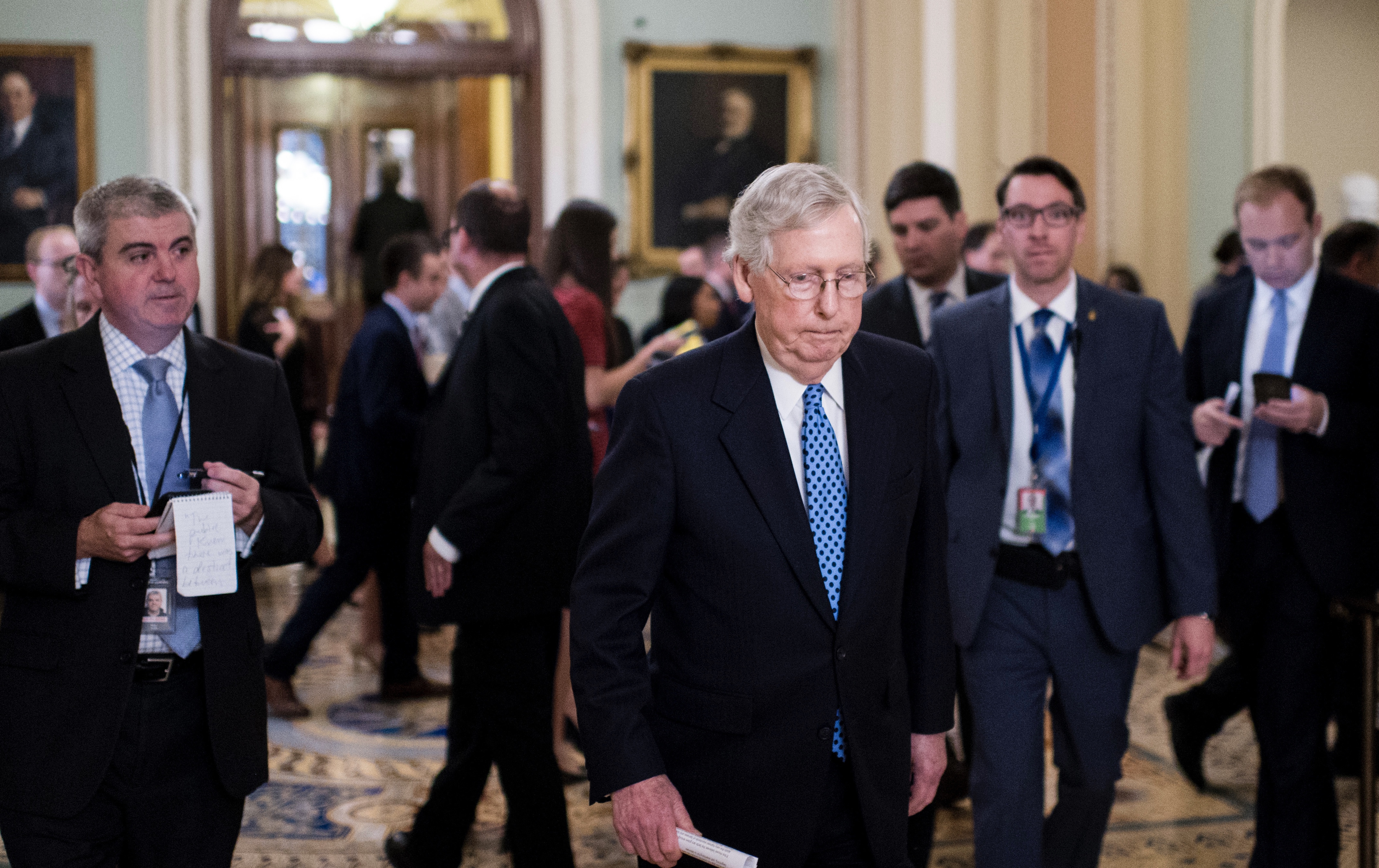 Don’t Count the Senate Out on Impeachment

No one is naive enough to expect wall-t0-wall coverage of impeachment. We all understand that television will continue to offer its slurry of commercial and entertainment fare. But everyone who wants to tune in, or who might be drawn to tune in by the drama of this accountability moment, should be able to do so without time constraints, or financial constraints. Yes, this sort of commitment would cost PBS—and corporate media. But this is the cost of the democracy that freedom of the press is supposed to sustain.

Impeachment isn’t supposed to be a spectator sport. It is supposed to be an exercise in democratic governance. If the United States was going to avert the threat posed by an imperial presidency and all the ills associated with monarchy, George Mason warned the Constitutional Convention of 1787, “No point is of more importance than that the right of impeachment should be continued.”

The impeachment power would, Mason told the delegates to the convention, provide an answer to questions that plagued them as they pondered the presidency they were in the process of establishing: “Shall any man be above justice? Above all, shall that man be above it who can commit the most extensive injustice?”

This small-“d” democratic understanding of impeachment is often lost amid the partisan positioning and general bad theater that is associated with the work of holding Trump to account. Democrats tend to be too bureaucratic and legalistic in their approaches to questions raised by evidence not just of the president’s corruption of diplomatic relations with Ukraine but also of his violations of the emoluments clause and of his lawless efforts to thwart scrutiny. Republicans have answered with bluster and obstruction.

All of this is to be expected. The founders were politicians, not saints. They knew what was coming. That’s why they rested the power to impeach with the federal officials who are most accountable to the people: members of the House, who were to be elected every two years from relatively small districts (so that they might get the most direct feedback from their constituents). House members now represent districts that are too large, too gerrymandered, and too easily manipulated by big money. Yet they are still more susceptible to popular pressure than senators or presidents or federal jurists.

For that popular pressure to be real, and sufficient, however, the people must have all the information they need to assume their proper role as the true governors of this American experiment. This is the reason why major broadcast and cable networks need to step up. And this is the reason why PBS, because of its unique role in American broadcasting, has the highest responsibility to answer the call of democratic duty.