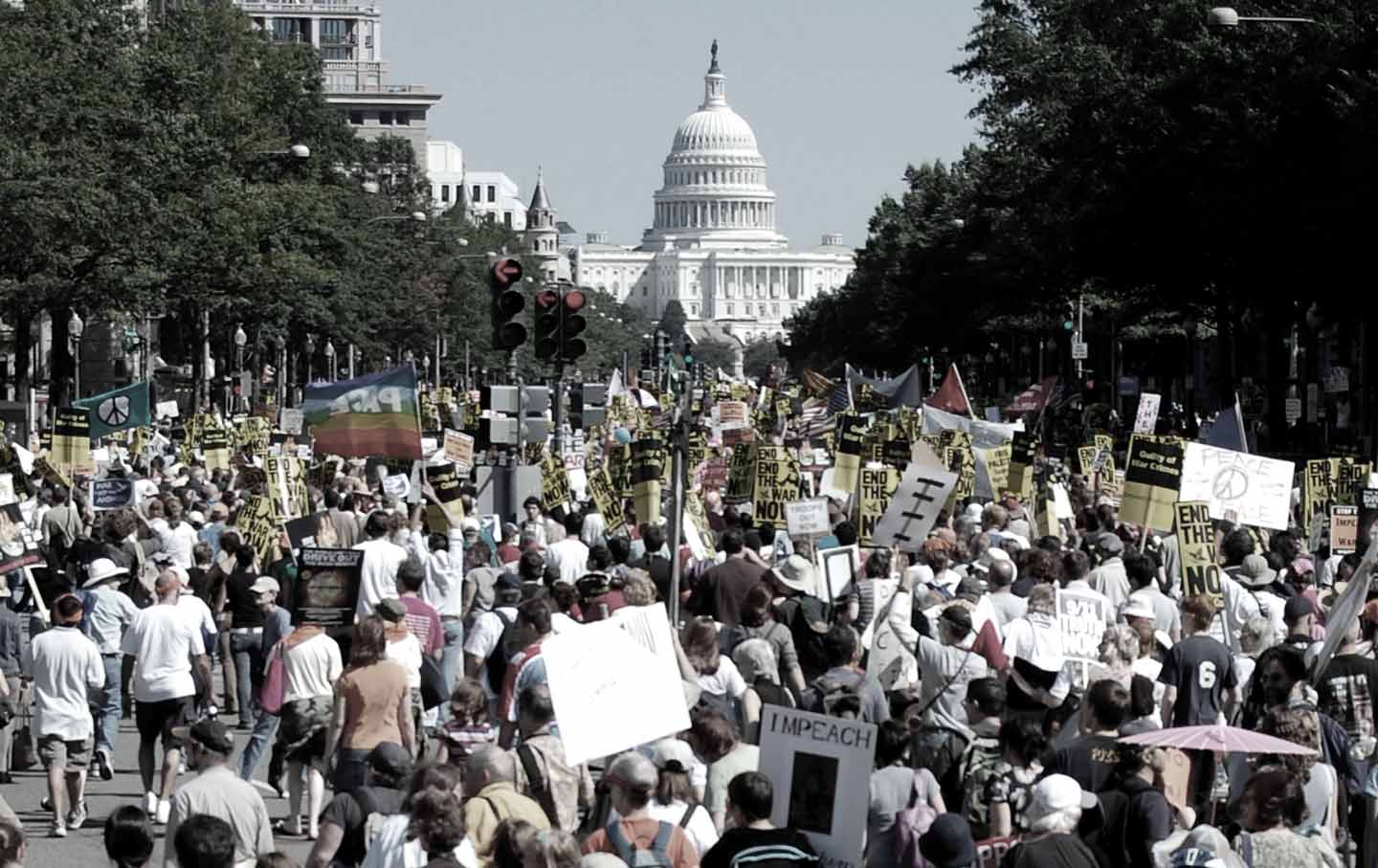 Over 300 people gathered last week at a conference at American University in Washington, DC, which brought together a remarkable assembly of philosophers, scientists, activists, diplomats, lawyers, doctors, economists, media experts, and activists working against patriarchy, gender discrimination, poverty, and racism, to develop creative answers and intelligent directions on how people can take action to put an end to war. The event was organized by World Beyond War, a new and vibrant network and campaign, which in less than two years has gained the endorsement of thousands of people and organizations in 135 countries who signed a pledge “to commit to engage in and support nonviolent efforts to end all war and preparations for war and to create a sustainable and just peace.” The gathering initiated a sorely needed examination of the public perception of the inevitability of war on the planet while promoting the possibilities and solutions for abolishing it.

One of the more astonishing reports was the heart-wrenching presentations on the ongoing state of chaos and destruction in the Congo, where more than 6 million people have died. We learned how the United States and its allies have been supporting brutal dictators who are responsible for these deaths, ever since the CIA was involved in the overthrow and murder of its first democratically elected president, Patrice Lumumba, in 1961. (To help those trying to spread the word and bring peace to the region, check out www.congojustice.org or www.friendsofthecongo.org.)

Dennis Kucinich spoke about his success in establishing a Department of Peace as well as missed opportunities when Congress rejected the impeachment legislation he introduced to hold the Bush administration to account for war crimes in Iraq. Gar Alperovitz gave a challenging analysis of a new initiative to create the post-capitalist economy, The Next System Project, with inspiring examples of programs instituted at the community level, such as worker cooperatives and public ownership of banks and utilities. Barbara Wien delivered a rousing presentation on patriarchy, calling it “the mother’s milk of militarism.” We heard, via video link, UK Labor Party leader Jeremy Corbyn, a long-time peace activist who has been campaigning to scrap Britain’s nuclear arsenal, on the very same day he was reelected to lead his party and be its next candidate for prime minister. Code Pink’s Medea Benjamin gave a chilling report on how Saudi Arabia corrupts and buys the US Congress and its army of lobbyists with huge multimillion-dollar payments. Bruce Gagnon, with the Global Network Against Weapons and Nuclear Power in Space, reported on the rising tide of activism in South Korea and Japan to protest the destabilizing new US missile bases in Asia and how more than 10,000 people demonstrated in Seoul. Journalist Gareth Porter proposed a 10-year plan for ending what he described as “the permanent war state,” crediting General Smedley, known for having characterized war as a “racket.”

What Smedley said in 1935, underscored by Porter was:

War is a racket. It always has been. It is possibly the oldest, easily the most profitable, surely the most vicious. It is the only one international in scope. It is the only one in which the profits are reckoned in dollars and the losses in lives. A racket is best described, I believe, as something that is not what it seems to the majority of the people. Only a small “inside” group knows what it is about. It is conducted for the benefit of the very few, at the expense of the very many. Out of war a few people make huge fortunes.

Videos of all the panels and speakers are posted here.

Workshops addressed issues such as closing the more than 800 US military bases encircling the globe, ending military recruitment in schools, abolishing nuclear weapons, organizing young people to work for Palestinian freedom, bringing the United States into the International Criminal Court, mitigating the effects of the new cold war through citizen exchanges with Russia to promote better relations, updating World Beyond War’s strategy manual, A Global Security System: An Alternative to War, providing activists and scholars key information on the myths, obstacles, and solutions that have already worked to end wars.

The conference came at a time when significant global events demonstrated that it is possible to end war. During the weekend of the meeting, Columbia negotiated to settle the longest-running armed conflict in the Western Hemisphere after 53 years of slaughter and destruction at a peace conference between the Colombian government and the Revolutionary Armed Forces of Colombia. Unfortunately, a subsequent public referendum rejected the historic settlement by a margin of less than 1 percent although the cease-fire is still holding. And the phenomenon of so many previously hostile indigenous tribes of America coming together in North Dakota to help the Standing Rock Sioux defeat the pipeline that is threatening their water and earth—“burying the hatchet” so to speak and using peaceful nonviolent means to protect our planet—can be seen as a metaphor for what all the nations of the world must now do as well—give up our tribal differences as members of nation states and “bury the hatchet” as global citizens.

It is increasingly dawning on people that the current post–Cold War series of wars and military devastation waged on the world by the United States and its alliances only make conditions more violent and perilous at home. We are beginning to understand that these wars may be void of any conceivable purpose except to feed the war machine. A growing number of people are supporting third party candidates that pledge to drastically cut the military budget although their voices are generally ignored. Despite the difficulty most of us have in imagining an end to war in these distressing times, when our foreign policy is so militarized, and the media is beating the drums for war and shutting out the voices of the peacemakers, the World Beyond War gathering offered new possibilities for shifting our priorities and our mind set. Regardless of who is elected on November 8, this conference demonstrated that there are growing numbers of us who are engaged and understand what is at stake. Their work and ideas will be needed if we are to end the violence and destruction of war.