Midway through my 10-day tour of Israel with Birthright in June, our trip leaders handed out a map of the country to each participant. The map clearly showed Tel Aviv, Jerusalem, and the winding Jordan River, but it had no demarcation for the West Bank, the Palestinian territory that Israel has illegally occupied for more than 50 years. Looking at the map, I was taken aback by the blatant way this supposedly apolitical trip was making such a political decision as to erase the existence of Palestinian people and their land. I felt something inside of me break, and I knew I needed to do something.

A few days later, four other women and I decided to walk off the trip to protest how Birthright supports the occupation and hides it from young Jews. Little did we know that we would inspire eight more Birthrighters to leave their trips to meet with Palestinians a few weeks later.

My path to going on Birthright was similar to that of many of the nearly 50,000 young Jews who will take the trip this year. I grew up in an interfaith home and have always felt drawn to Jewish community, culture, and practice. I felt especially moved by Judaism’s commitment to social justice. As I’ve become an adult, I’ve wanted to develop a deeper connection with my Jewish community and forge a Jewish identity. One of the opportunities most frequently presented to me was Birthright, a free, 10-day educational trip to Israel for diaspora Jews.

I decided to go on the trip after much thought and reflection. With all the violence in the region this spring, when Israeli soldiers killed more than a hundred nonviolent Palestinian protesters and injured some 17,000, it felt crucial to engage with my own community about Gaza, the occupation, and other complexities surrounding Israel. Birthright seemed like an excellent opportunity. But when I got there, I quickly realized that Birthright was not open to conversation about the recent violence or the ongoing occupation.

While Birthright promises an apolitical chance to connect with both Israel and one’s Jewish identity—in 2012, it described itself to Haaretz as “a mainstream, nonpartisan, apolitical organization”—it does not deliver. This is unsurprising, since there is no way to engage with Israel, or any place, without exploring its political realities. Politics are always present, no matter how hard you try to avoid them. They are in the language people use, the facts they choose to tell, the stories they weave in and the stories they leave out—and the language, facts, and stories, both spoken and unspoken, that we heard during our trip all pointed toward a troubling, pro-occupation interpretation of events. 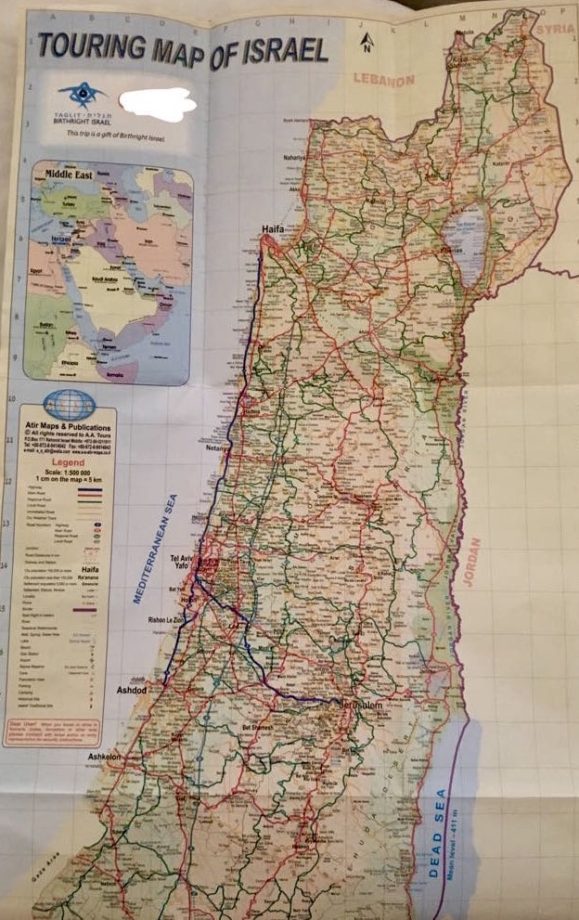 Map of Israel handed out by Birthright in which the West Bank is not marked. (Bethany Zaiman)

If, for instance, I or another participant asked a question about the West Bank, our tour guide would respond by calling it “Judea and Samaria.” (The phrase “Judea and Samaria,” which harks back to the Bible, has its roots in the settler movement and effectively—linguistically—claims the region as Jewish.) When he revisited the story of the founding of Israel, he claimed that “quote-unquote Palestinians” didn’t exist back then and instead “created a nation that was never there” after the fact. And when our bus drove for miles alongside the separation wall that locks Palestinians in an open-air prison, our guide ignored it, only acknowledging it on the second-to-last day, after we pressed him to identify it. Throughout, he refused to answer—or certainly did his best to avoid answering—basic questions about Israel’s military control over an entire people, instead justifying settlement expansion on terrorism and the biblical presence of Jews in the region.

And it was much the same with other speakers. One supposedly neutral educator, a self-described “internationally acclaimed expert” on Middle East policy who had been hired to give us an update on “the conflict,” avoided questions about the detainment of Palestinian children, Israel’s cozy relationship with Donald Trump, and even the recent US embassy move to Jerusalem, which has effectively foreclosed the peace process. Needless to say, it was a far cry from the promise, spelled out on the Birthright website, that “The Birthright Israel journey is committed to a culture of open discussion and dialogue about all issues: identity, geopolitics, religion, and Jewish life.” Birthright did not respond to an e-mail requesting comment.

During this time, I was fortunate to find other people on the trip with a similar desire to learn the truth about the occupation. Together, we spent nine days engaging with Birthright trip leaders and participants, trying to build relationships and delve into difficult conversations. Yet, not only did our questions about the Occupation hit wall after wall, but our calls for diversity and a more nuanced education were largely met with platitudes, irrelevant lectures, and inaction.

When I asked about some of the challenges Bedouin communities in Israel have been facing, particularly as stories have piled up about Israel’s revoking their citizenship, our guide lectured me about the Crusades, without ever clearly connecting the two topics. When we asked about the lack of diversity in Birthright’s programming, staff members responded by stopping a Bedouin woman in a local market and asking her to speak with us. She seemed confused but generously offered us a few minutes of her time. None of the staff seemed to understand how inappropriate it was to put her on the spot and offer her time to us as a trade-off for the lack of diversity in their own planning. Our requests to talk to Palestinians were consistently denied and we were told over and over “it’s a Jewish trip,” reproducing a tired and troubling dichotomy between Jews and Palestinians.

Throughout the trip, I made it clear that my Jewishness was deeply informed by values of social justice and that those very values demand we face the reality of occupation. So did the other women with whom I had connected. After visiting Yad Vashem, Israel’s Holocaust memorial, one of these women shared a poem about her experience walking through the site and the ways her Jewish identity was rooted in a calling to meet all grief and suffering head-on. Some of us were tearful in response, but the Birthright tour guide grabbed the microphone back from her and called it “BS.”

On the 10th day of the trip, the five of us, angry and fed up with Birthright’s dismissal of our questions, consistent miseducation of our community, and insistence on hiding the reality of the occupation, made our choice: We walked off the trip.

With support from IfNotNow, a movement to end the American Jewish community’s support for the occupation, we decided to leave to see the truth for ourselves. About halfway through the trip, IfNotNow had connected us with Breaking the Silence, an organization of former Israeli soldiers whose mission is to educate the public on the realities of life under occupation for Palestinians—and life as an occupying force for the Israeli soldiers who serve in the occupied territories. We joined a tour with Breaking the Silence as soon as we left Birthright.

Among the places we traveled to was Hebron, an occupied Palestinian city once bustling with life that’s now largely a ghost town. There, we learned how Jewish Israelis had created small illegal settlements, displacing Palestinian families, and how the Israeli military had set up a system of checkpoints and controls to “protect” those settlements. Under this system, tens of thousands of Palestinians are forbidden to walk out their front doors and onto their own streets, while the fewer than a thousand Israeli settlers are free to go where they want. As an American, it was hard to avoid the parallels between the clear, legally mandated separation of the Palestinian and Jewish populations and other racist atrocities in our own history, such as the segregationist policies of the Jim Crow–era South.

Birthright claims it is apolitical, but it’s not just a free trip. It purposefully hides this truth from young Jews. It is morally reprehensible and entirely irresponsible for what is likely the world’s largest educator of unaffiliated young Jews like me to provide programming that is not willing to grapple with the reality of occupation or life on the other side of the separation wall. My generation of Jews deserves and demands to know the truth. We can and must do better for our community and the Palestinian people.