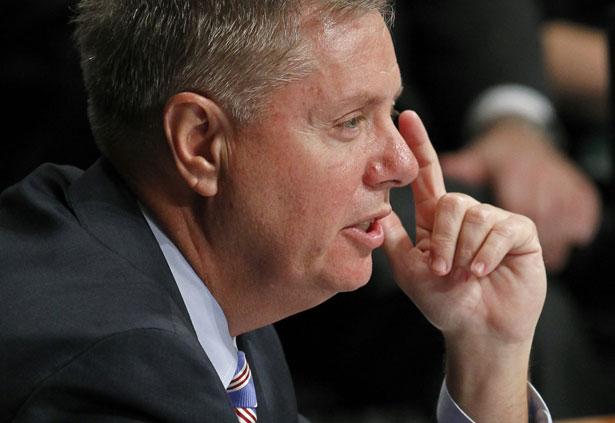 The field of Republican presidential contenders does not want for hawks. Marco Rubio is already talking about attacking Iran. Jeb Bush has stacked his foreign policy team with his brother’s neoconservative advisers, including Iraq war architect Paul Wolfowitz. Scott Walker wants to be “a leader that is willing to take a fight to them before they take the fight to us.” Even Rand Paul has proposed to increase defense spending. (As for the other side, Hillary Clinton has plenty of questions to answer about her support for military intervention.)

Now the flock is about to get a candidate to out-hawk all the others: South Carolina Senator Lindsey Graham, who is expected to announce his bid for the White House on June 1. “I’m running because I think the world is falling apart; I’ve been more right than wrong on foreign policy,” he said Monday on CBS This Morning.

Graham’s foreign policy is essentially a philosophy that force can solve most problems. He pushed aggressively for the invasion of Iraq, for putting boots on the ground in Libya, and for military intervention in Syria. Graham isn’t unique for trying to peddle violence—it’s the fear he uses to market military action that makes him stand out. From his claims that Saddam Hussein was “flat-out lying” about weapons of mass destruction in Iraq and that “chemical weapons in Syria today means nuclear weapons in the US tomorrow,” to his assertion that ISIS “will open the gates of hell to spill out on the world,” Graham’s track record is a long, terrifying trail of hyperbole.

What’s should really frighten people is Graham’s own extremism, and his eagerness to throw the constitution out the window in the name of national security. Here are a few examples:

1. His support for the Fifth Amendment’s right to due process is selective: “If I’m President of the United States and you’re thinkin’ about joining al-Qaeda or ISIL—anybody thinkin’ about that?—I’m not going to call a judge, I’m going to call a drone, and we will kill you,” he said at the Iowa Republican Party’s annual Lincoln Day Dinner fundraiser on Saturday.

2. His support for the First Amendment is selective, too. “Free speech is a great idea, but we’re in a war,” he said in 2011, regarding the burning of the Quran by Tennessee pastor Terry Jones.

3. He’s not big on the Sixth Amendment, either. During a Senate debate in 2011 about indefinite detention for citizens suspected of joining Al Qaeda he said, “When they say, ‘I want my lawyer,’ you tell them: ‘Shut up. You don’t get a lawyer. You are an enemy combatant, and we are going to talk to you about why you joined Al Qaeda.’”

4. And yet he still thought the Iraq war was “an opportunity to demonstrate to the Arab world and others that the rule of law matters.”

5. He thinks Guantánamo is full of “crazy bastards that want to kill us all,” but that the secret prison itself is “well run.”

6. He opposes an assault weapons ban because “If there’s a cyber attack against the country and the power grid goes down and the dams are released and chemical plants…discharge” and there are “armed gangs roaming around neighborhoods,” then “a better self-defense weapon may be a semi-automatic AR-15 versus a double-barrel shotgun.”

7. He claimed the world was “literally about to blow up” if the United States didn’t intervene in Syria.

8. He doesn’t only want to deploy the military all over the Middle East—he might use it against Congress, too. “And here’s the first thing I would do if I were president of the United States. I wouldn’t let Congress leave town until we fix this,” he said in March, referring to cuts in the defense and intelligence budgets. “I would literally use the military to keep them in if I had to.”

9. He suggested that Boston bomber Dzhokhar Tsarnaev, 19 years old at the time and an American citizen, should not be read his Miranda rights and should be held as an enemy combatant “for intelligence gathering purposes.”

10. He has said he is “glad” the NSA has the domestic surveillance programs revealed by Edward Snowden.

Graham’s chances of securing the GOP nomination are basically nil. Still, his entrance to the race is yet one more signal that the right is not seriously considering an alternative to a neoconservative worldview any longer, and is instead betting that the easiest way to win is by scaring the pants off the American people.