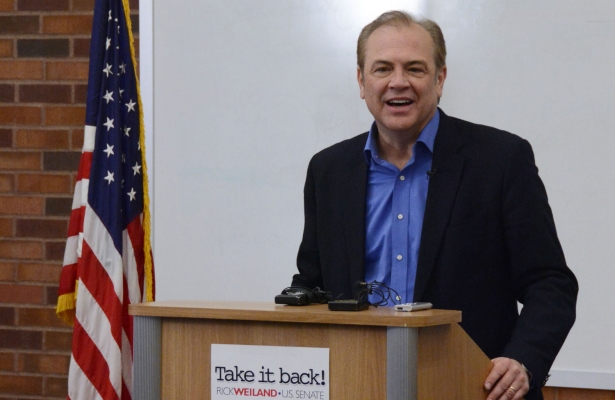 Phase IV of the Keystone XL Pipeline Project would, if approved and constructed, cut across the state of South Dakota from its northwest corner through hundreds of miles of ranch land to the Nebraska border. If all the promises of jobs for workers and protection for the environment that have been made by Keystone proponents were well grounded, there’s good reason to believe that Rick Weiland might be on the forefront of efforts to get the project up and running.

Weiland’s a rural-state Democrat seeking to hold a Senate seat that has been in Democratic hands since 1997. It’s a hard race, where the pressure is on to appeal across lines of partisanship and ideology in a state that has not backed a Democrat for president since Lyndon Johnson in 1964.

Political pundits would, no doubt, make excuses for Weiland if he finessed the Keystone debate with a politically convenient bow to Nebraska legal deliberations and ongoing assessments of the potential impact by federal agencies—as the US State Department did with its just-announced delay of a decision on whether to approve the $5.4 billion initiative.

But Weiland, a former congressional aide and regional director of the Federal Emergency Management Agency, has a long record of balancing economic and environmental concerns. And he is not prepared to avoid the issue.

The Democratic contender declares flatly, “I’m opposed to it.”

Like the members of the Cowboy Indian Alliance of ranchers, farmers and tribal communities from along the pipeline route, which this week is rallying in Washington to urge the administration to reject the Keystone XL proposal and protect the environment, Weiland has sorted the issue out in practical terms.

“[There are] huge environmental impacts,” he said in a March interview during a visit with members of the Cheyenne River Sioux Tribe on the fourth-largest Indian reservation by land area in the United States. “You look at what it takes in terms of the extraction of the oil and the energy that is consumed to do that, the transportation—the fact they have to heat the tar sand up so it becomes almost liquefied—through a pipeline that crosses over precious water resources like the Ogallala [the shallow water table aquifer that underlies portions of South Dakota and seven other states] and the potential for the damage that could occur, and the fact that we’re not really getting anything for taking on that risk. I think that in and of itself is reason not to build it.”

Weiland notes that because the Keystone project is an export pipeline, “very little if any of the oil, tar sand oil, that’s going to be coming through South Dakota is going to stay in the United States. Most of it is going overseas.”

At the same time, he expressed doubts about the suggestion that the project would create jobs. “The last report I read, which was put out by the Government Accounting Office (GAO) basically said we’re talking about thirty-five full-time jobs, permanent jobs, and we don’t even know how many of those are going to be in South Dakota. And the 2,000 that it’s going to take to build the pipeline, those are temporary jobs,” Weiland explained to Sustainable Dakota’s Tasiyagnunpa Livermont.

The Obama administration continues to wrestle with the Keystone issue. There are now suggestions that the wrestling could extend until after the November election. That’s earned the president criticism from Republicans such as Alaska Senator Lisa Murkowski, the ranking Republican on the Senate Energy and Natural Resources, who called the delay “a stunning act of political cowardice.” And from Democrats such as Louisiana Senator Mary Landrieu, who chairs the committee and called the delay “irresponsible, unnecessary and unacceptable.”

At the same time, opponents of the pipeline are frustrated and concerned. “Keystone XL poses a grave risk to our land, water and climate, and breaks long held treaties, and President Obama still has an opportunity to do the right thing and reject the pipeline,” argue activists with the Cowboy Indian Alliance’s “Reject and Protect” campaign. “But he won’t take it unless we commit ourselves to principled action and push him to step up.”

The president and his aides and appointees undoubtedly feel pulled in many directions.

In the end, they must make a choice.

And in doing so they would be wise to consider the reasoned position of Rick Weiland, who says that “what you end up having at the end of the day is an awful lot of risk associated with the construction of this and the potential for impacts on the environment and very little reward, and that’s why I’m opposed to it.”