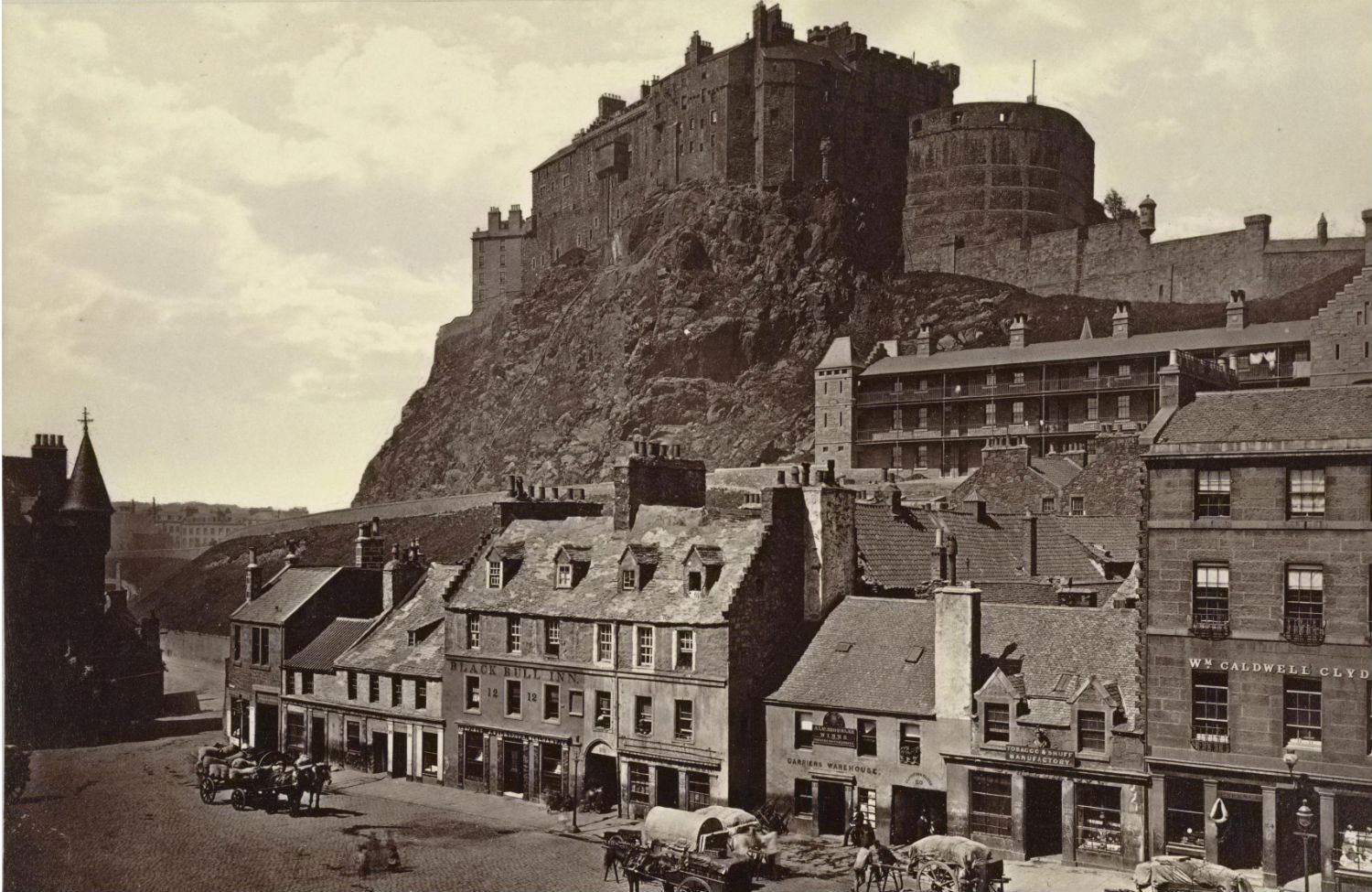 While The Nation is only half as old as the Scottish and English Acts of Union—we were founded in 1865, the United Kingdom in 1707—we have, in our century and a half, taken great interest in affairs north of the River Tweed. In the winter of 1871, a heated debate on Scotch linguistics broke out on our letters page, with Angus Croupar of Chicago going so far as to call Thomas Davidson of St. Louis “hypocritical.” The Nation’s editors were forced to step in: “We know too much of the tenacity of the Scotch character to let two Scots carry a discussion of this kind any further in our columns.”

In the fall of 1878, the England-residing Henry James—a frequent contributor of travel essays and art criticism to The Nation, beginning with our first issue—wrote a two-part dispatch from Scotland. In the first half, James describes a walk up Edinburgh’s Calton Hill and then back down into the city. 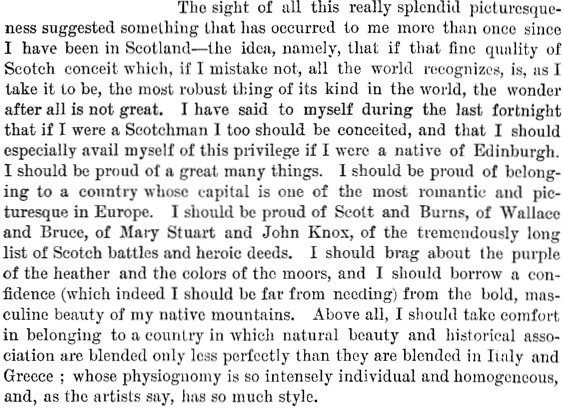 Concluding the essay, James writes: “There is nothing invidious in saying that an American coming into Scotland after a residence in England cannot fail to be struck with the democratic tone of the common people. They address you as from equal to equal, they are not in the least cap-in-hand, and they are frugal—almost miserly—in the use of the ‘sir’…. I have encountered in Scotland but a single sect—the sect whose religion is hospitality.”

In the second dispatch, published two weeks later, James added this memorable line: “There is one advantage which European life will long have over America—the opportunity that it affords for going to picnic in the shadow of ancient castles.”

As the movement for Scottish home rule accelerated toward the end of the nineteenth century—imitating and drawing strength from the more volatile and popular Irish version—The Nation regularly updated its readers about Scotland’s political affairs. In 1887, amid a debate about Scottish autonomy, a Nation correspondent wrote: “There is perhaps a latent element of regret and discontent which no scheme of home rule can remove. Scotland is a nation, if ever there was one, and yet her tie to England, with all that it bestows, has deprived her of some things that belong to a nation.”

The issue smoldered through most of the twentieth century, only to re-emerge with the discovery of massive oil deposits in the North Sea off Scotland in the late 1960s. In 1976, David Scheffer—then a student of law at Oxford, now a professor at Northwestern—wrote an article for The Nation titled, “Will Britain Break Up?” It mostly focused on the question of devolved powers to Scotland and Wales—finally accomplished, to an extent, in the late 1990s—but also raised several issues central to the current debate on full Scottish sovereignty. It also serves as a good primer on the twentieth-century history of the independence movement. 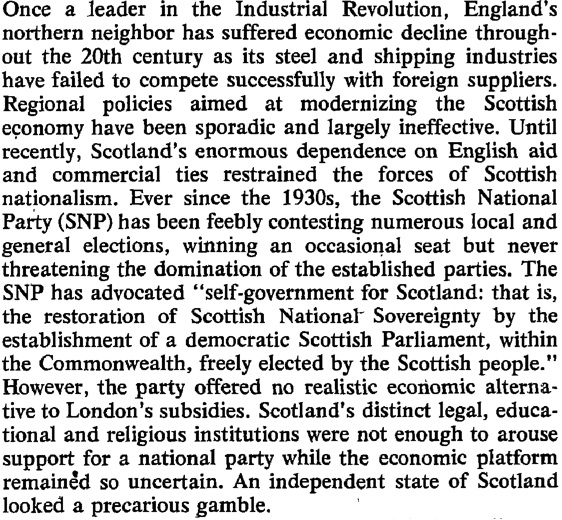 Then they found the oil.

Scheffer’s essay concludes with a vivid description of the forces behind the move for greater local autonomy, followed by a rousing prescription for what could fix the ailing British state. Much of it contains predictions that have indeed come true; the rest of it—every word—could have been written today.

In an e-mail yesterday, Scheffer recalled The Nation’s legendary editor Carey McWilliams arranging to call a payphone in his Oxford dorm at an appointed time to discuss the story. “It was such a privilege to work with him on it,” Scheffer recalls. He also graciously reread the 1976 essay and provided this reflection:

Surprisingly, the article holds up quite well today. At the time, I was making the point that a federal solution for the UK would make better sense than devolution; otherwise, separatism would take hold. Well, devolution finally arrived in 1998 and it has propelled the Scottish National Party to advance its independence plank and take control of the Scottish Government, leading to the independence referendum of September 18th. What I saw coming in 1976 (and earlier in 1974 and 1975 when I was researching and writing my senior thesis at Harvard) was an extraordinarily modern vision of self-determination that has been peaceful, democratic, passionate, and intellectually well-reasoned, and in the end has set the gold standard for self-determination in modern times. The 1976 article anticipates the prominence of North Sea oil in the overall debate, the lasting power of the Scottish National Party, the reality that devolution would become a slippery slope towards independence because of the unique character of the British Government, and the Scots’ strong desire not to be taxed by Westminster. I have followed the Scottish debate for 40 years now, and I approach tomorrow, September 18th, which also happens to be my birthday (!), with optimism because whatever the outcome, the Scottish people will have spoken, indeed they will have roared.

In 1991, after Margaret Thatcher had been booted from office in an intra-party coup, New Left Review editor Robin Blackburn wrote in The Nation about the possible break-up of the United Kingdom under the title, “Cracks in the Stately Façade.” As Scheffer had fifteen years earlier, Blackburn gave a broad world-historical context to the story, with a startling conclusion. Any American who thinks the Scottish referendum today is of only Scottish and English importance—or that its global implications are limited to Catalonia or Quebec—should read Blackburn’s essay. He brings the issue directly to our stoop. 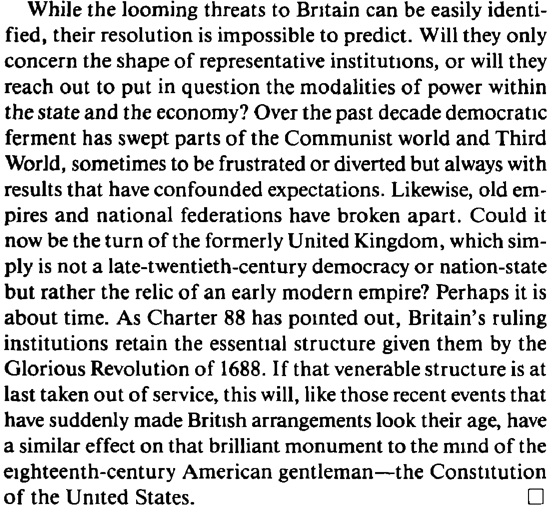