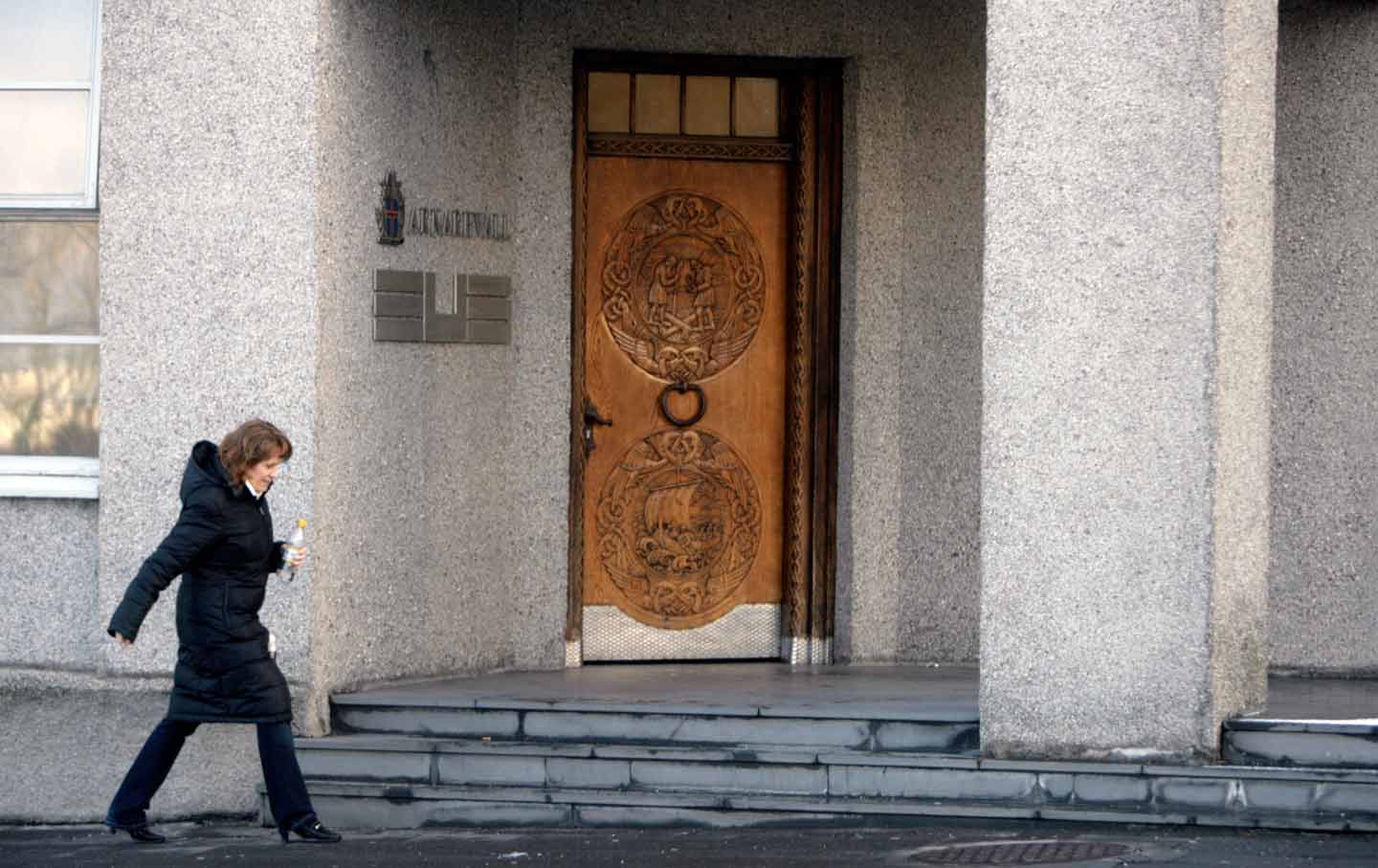 A woman passes an entrance to Iceland's Ministry of Finance in Reykjavik, Iceland. (Reuters / Ints Kalnins)

Iceland just held a fine election, in which candidates from across the political spectrum competed for power in voting that produced big advances for the direct-democracy advocates of the Pirate Party and the radical Left-Green Movement. But the Independence Party, which is described as “center-right” but supports LGBTQ rights and promises to maintain most of the welfare state, gained the most votes. No party won a majority, so now the various and sundry partisans are scrambling to form coalitions that could lean right or could lean left.1

But that is not the news that Americans should focus on.2

The news from Iceland is that 79.2 percent of the electorate participated in Saturday’s voting.3

That’s not an astronomical number by international standards–Belgium frequently tops 90 percent turnout. But it is wildly better than anyone anticipates the United States will muster in next week’s voting for president and control of the US Senate and House of Representatives.4

“We are the only advanced democracy that makes it deliberately difficult for people to vote.” —President Obama

After an election campaign into which Donald Trump has injected high levels of drama and intrigue, not to mention fear and loathing, election analysts worry that turnout in the United States could fall 20 points, perhaps even 25 points below that of Iceland.5

What this means is that, on November 9, if you meet two Americans who are of voting age and are eligible to cast ballots under the ridiculously restrictive laws of the states in which they reside, it will be likely that one of them did not vote.6

In most states it is likely that the one nonvoter will be younger and poorer than the one voter—meaning that an older and relatively elite group of voters is defining not just the results of elections but the direction of the United States.7

As concerns regarding the state of the nation go, this should be a big one. And it ought to inspire not just complaints—as have been aired for years—but calls to action.8

Voter turnout has been declining in recent years. In the 2012 presidential election, just 53.6 of the voting-age population cast ballots in the race between Democrat Barack Obama and Republican Mitt Romney, according to United States Elections Project data. That was down from 56.9 percent in 2008.9

It’s much worse in so-called “off-year” elections. According to Election Project data, only 33.2 percent of voting-age Americans bothered to participate in voting for the top jobs on their state ballots in 2014 elections where members of the House and Senate, most governors, and most state legislators and thousands of local officials were chosen. The nation’s most populous states, all of which had full federal and state ballots, saw dismal turnout: 23.8 percent of the voting-age population in Texas, 24.6 percent in New York, 24.7 percent in California.10

“Our democracy is not going to function well when only half or a third of eligible voters are participating.”

Only three states (Alaska, Maine, and Wisconsin) saw turnout among the voting-age population top 50 percent in 2014. Only seven states (Alaska, Colorado, Iowa, Maine, Minnesota, Oregon, and Wisconsin) saw 2014 turnout over 50 percent among the narrower “voting-eligible population” class of adults who can leap the hurdles to participation in the United States. In contrast, elections in Germany turnout is regularly in excess of 70 percent, in Scandinavia above 80 percent, in Belgium above 90 percent. “The International Institute for Democracy and Electoral Assistance ranks the United States 120th in the world for average turnout,” notes Vermont Senator Bernie Sanders, who as a presidential contender spoke frequently about voter-turnout issues.11

As President Obama observes, “Our democracy is not going to function well when only half or a third of eligible voters are participating.”12

Why is voter participation so dismal in the United States by comparison with the rest of the world?13

Political systems differ from country to country, and so comparisons are tricky. But some patterns are clear. Unlike countries with high turnout rates, for instance, elections in the United States are exceptionally expensive, exceptionally long, and exceptionally nasty. Because of the declining circumstance of commercial media (especially newspapers) and the chronic underfunding of public and community broadcasting outlets, US voters have less access to consistent and high-quality coverage of campaigns.14

Even those who are informed and ready to vote face barriers to suffrage.15

“We are the only advanced democracy that makes it deliberately difficult for people to vote,” says President Obama, who notes that many US states have seen the enactment of laws that make it harder to register and cast ballots. In addition, the US Supreme Court only made matters worse with its 2014 decision to undermine the Voting Rights Act. “The reason politicians ignore so many of the working poor is that they don’t vote,” argues The Root’s Danielle C. Belton. “And the reason so many of the working poor don’t vote is that certain politicians have made sure it’s as inconvenient as possible for them.”16

It is not particularly difficult to identify factors that depress turnout. Nor is it difficult to recognize that that the crisis is worsening. States and communities across the country reported record low turnout in 2014 primaries and the general election. Overall, US turnout was the worst since 1942, when World War II presented unique challenges.17

What is necessary now is a recognition that the crisis will continue to worsen if we do not take appropriate actions to assure that elections are reflective of the will of the whole people.18

Some of the reforms that are needed involve significant transformations of our rules and structures for funding campaigns—including a constitutional amendment to restore the authority of citizens and the elected representatives to organize elections in which votes matter more than dollars. Changes must be made in order to fill the journalistic void by sustaining and expanding independent media. There are also arguments to be made for significant structural shifts. For instance, the group FairVote proposes a number of “systemic electoral reforms that reverse the contextual reasons for low turnout.”19

These are all sound proposals, and some of them have been implemented with considerable success in states (such as Oregon, which has led the way on removing barriers to registration) and communities across the country. Taking them national involves organizing and hard work.21

But is there something more we can do right now—something that should be easy and without significant controversy?22

How about making Election Day a holiday? That’s hardly a radical idea. Countries around the world schedule elections on weekends (as Iceland does) or recognize weekdays when elections are held as a holiday. Louisiana usually votes on Saturdays. And roughly a dozen states and jurisdictions give some recognition to Election Day as a holiday. So why not take the idea national?23

That’s what Senator Sanders has been proposing. In 2014, the senator from Vermont argued that, as part of a broader effort to generate the largest possible turnout, “Election Day should be a national holiday so that everyone has the opportunity to vote.”24

After the turnout crisis became evident—even in his own traditionally high-turnout state of Vermont, where voter participation fell to just over 40 percent of the voting-eligible population, the worst rate on record—Sanders acted. He proposed the “Democracy Day Act of 2014”—a simple piece of legislation that would designate each and every federal Election Day as a public holiday.25

“We should not be satisfied with a ‘democracy’ in which more than 60 percent of our people don’t vote and some 80 percent of young people and low-income Americans fail to vote,” argues Sanders. “We can and must do better than that. While we must also focus on campaign-finance reform and public funding of elections, establishing an Election Day holiday would be an important step forward.”26