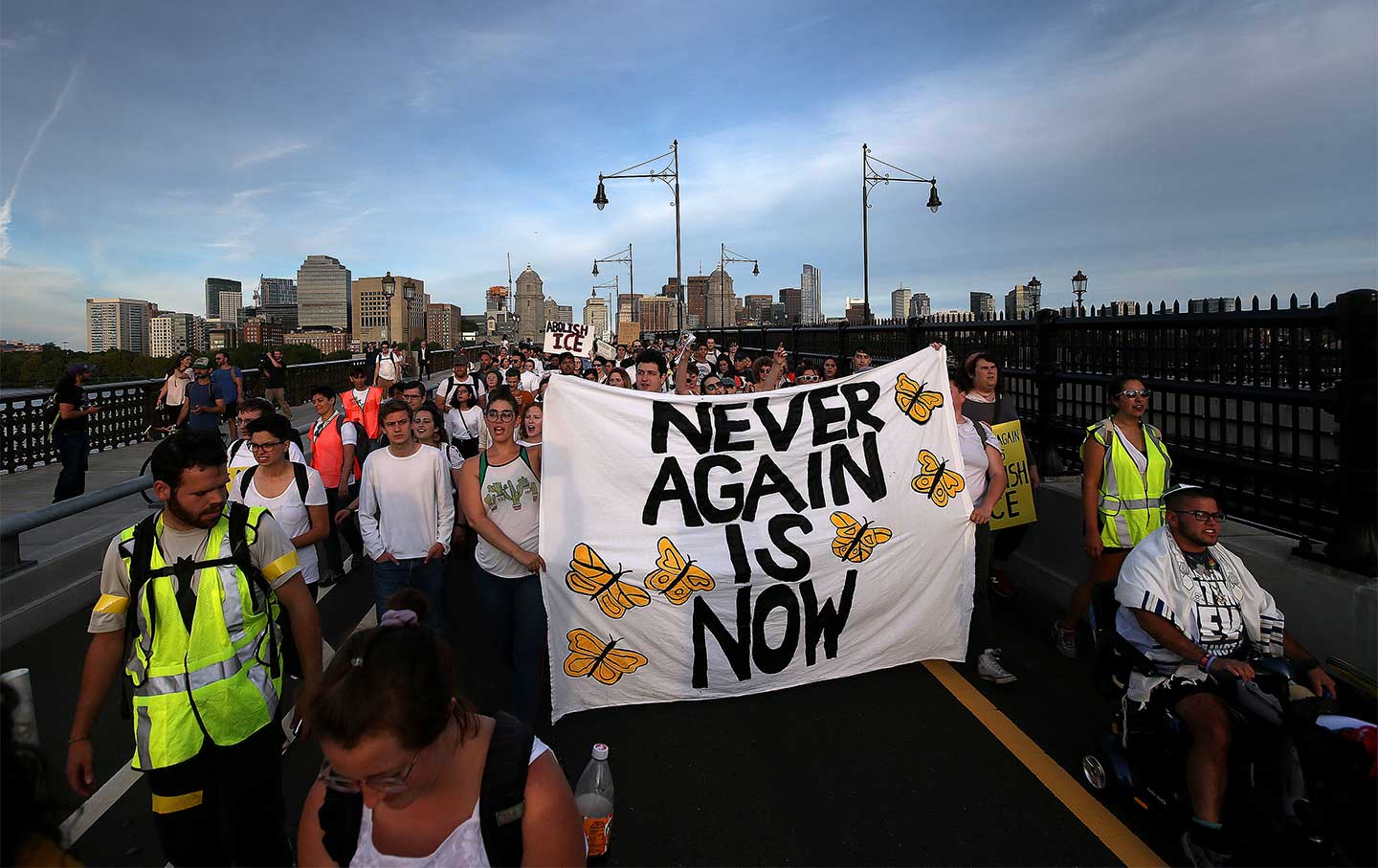 Anti-ICE protesters march in a Never Again Action-planned protest across the Longfellow Bridge between Boston and Cambridge, Massachusetts, toward Amazon's Cambridge office after rallying at the New England Holocaust Memorial on September 5, 2019. (Getty Images / Barry Chin, The Boston Globe)

The group Never Again Action asks its supporters to take a pledge that begins with a basic premise: i refuse to be a bystander. As it has ramped up a campaign against abuses committed by the US Immigration and Customs Enforcement agency, the group has been blunt:1

Children dying in camps. Families living in fear. We have seen this before. We won’t let it happen again. Never again is now. Thoughts and prayers won’t save lives; it is our actions that matter.

We will be the allies that our Jewish ancestors needed in Germany, before it was too late. We will take relentless, bold direct action and we will not stop until ICE is shut down, the camps are closed, and immigrants no longer live in fear. Are you in this with us?2

It turns out a lot of people are with Never Again Action, joining in actions organized by a relatively new group with a deep sense of mission. In recent days, it has worked with allies across the country to launch a series of extraordinary protests with a declaration that “This December We’re Going After ICE.”3

In coordinated actions this week, activists have refused to be bystanders. They’ve rallied, marched, engaged in civil disobedience, and in a number of cases were arrested as part of savvy and creative protests that put the spotlight on ICE abuses.4

In Central Falls, Rhode Island, hundreds of people blocked driveways leading in and out of the controversial Wyatt Detention Center, which contracts with ICE and where more than 100 ICE detainees are being held. As activists with Never Again Action, Progreso Latino, and Mobilize Our Resistance rallied outside the publicly owned yet privately operated facility on December 10, Rabbi Jeffrey Goldwasser, of Temple Sinai in nearby Cranston, explained, “We are living in a society where the government is telling people that their lives do not matter. As witnesses to the inhumanity of our nation’s war against immigrants, it is our obligation today to decry the way that the current administration’s policies are deeply, morally broken.” (For videos of the Rhode Island protest, and more background on the ongoing struggle over the Wyatt facility, check out Uprise RI.)5

At the same time as Never Again Action activists were rallying in Rhode Island, they were also taking the issue to the streets in Kansas City, Missouri, where dozens of protesters targeted the UMB Bank, which represents bondholders who are suing the city of Central Falls to maintain the Wyatt facility’s contract with ICE in place.6

Never Again Action was on the streets of San Diego, California, as well, joining activists with Families Belong Together in a protest at the United States Customs and Border Protection San Diego Headquarters, in which they supported the efforts of physicians from Doctors for Camp Closures, who had been barred from providing flu vaccines to detainees in the Chula Vista Border Patrol Station.7

The Customs and Border Patrol agency says it has “never been a CBP practice to administer vaccines” to people who are detained in its facilities—despite the fact that Senator Kamala Harris says, “We know of at least three immigrant children who died after being in US custody with the flu. Why put more at risk?”8

The Department of Homeland Security’s press office was dismissive, saying, “Of course Border Patrol isn’t going to let a random group of radical political activists show up and start injecting people with drugs.”9

“And I thought I was just a doctor trying to follow CDC recommendations to administer life saving vaccination that will save children’s lives,” replied Dr. Hannah Janeway, an emergency room physician who has been prevented from providing vaccinations. “More people will die without the vaccine,” she explained. “There’s no doubt. They are being locked in cages in cold weather together, without any vaccination, in a year that is supposed to bring a horrible flu epidemic.”10

The struggle against ICE is a national struggle being waged by activists from many groups in many places. Never Again Action is bringing a fresh sense of solidarity and connectedness to the struggle. “Here is the reality that we do know and that we will not stop fighting for,” Rabbi Goldwasser declared in Rhode Island, where he pulled the threads together with a message:11

“We have a sacred obligation. We have an obligation to heaven and earth to fix what our leaders have so badly broken. We shall not remain silent against this darkness. This year, as we mark Hanukkah, our day of bringing light into the darkness, we will have the courage to Kindle the light of freedom and justice. We will have the courage to say that policies born out of fear and hatred must be shut down.12