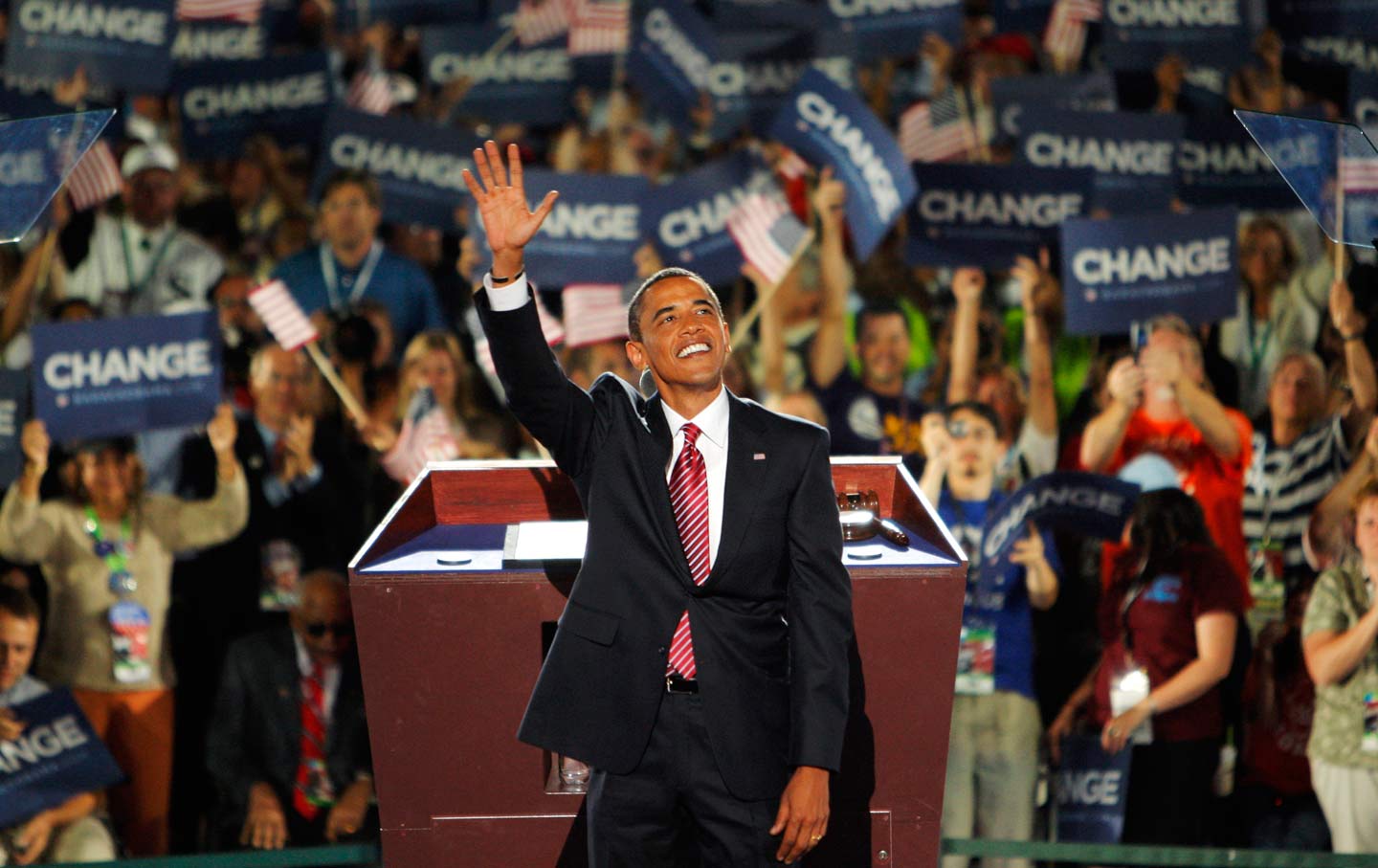 There are three different temporal perspectives from which to evaluate the presidency of Barack Obama. There’s the perspective of November 8, when it was widely anticipated that he would hand off the White House to his favored successor and thus cement his legacy. Then there’s the perspective of November 9, when the most shocking electoral upset in American history was accomplished by a man who is in every way—from ideology to temperament to skin color—a repudiation of our nation’s first black president. Lastly, there’s the perspective historians will take decades from now, as they assess Obama’s entire tenure in comparison with what came after it—so long as what comes after isn’t total nuclear annihilation. (I’m joking… mostly.) Obviously, it’s the last of these perspectives that will prove most useful. But sitting here in 2016, I don’t have the luxury of distance, and so I find myself torn between the first two.1

How to appraise the presidency of Barack Obama as the specter of President Trump looms? The clearest way to reconcile the two perspectives is to understand how Obama’s presidency, and all that it accomplished, could have led to the election of Trump. I think there are basically two tweet-length explanations:2

1. America elected a black man president, and about half the country proceeded to lose its goddamn mind.3

2. The white working class realized that the American dream is a sham. Then a con artist promised to restore it, and they bought the con.4

This is, of course, not a comprehensive list. This election, decided by about 100,000 votes in three states, was so overdetermined that you can plausibly list two dozen factors that were “decisive.” But allow me to focus for a moment on the second account.5

In 2012, I wrote a book, Twilight of the Elites, about the crisis of authority in American life. Noting that America’s trust in its institutions was at an all-time low, I argued that a cascade of elite failure, ever-growing inequality, and declining mobility had brought the nation to the brink of a genuine democratic crisis. There were, I wrote at the time, two basic types of response to this fact. Institutionalists “see the erosion of authority and declining public trust as a terrifying trend,” whereas insurrectionists “see the plummeting of trust in public institutions as a good thing if it can act as a spur for needed upheaval and change.”6

Despite his pledge to “fundamentally change the way Washington works,” Barack Obama was always an institutionalist. He ran on the promise of restoring wise stewardship to institutions that had been trashed by the reckless and feckless. Rather than blowing them up, he urged significant reforms aimed at making our institutions more responsive. Standing before the millions who had gathered on the National Mall on the blindingly frigid morning of January 20, 2009, he delivered a kind of institutionalist pep talk: “Starting today, we must pick ourselves up, dust ourselves off, and begin again the work of remaking America.”7

As a substantive project, Obama’s institutionalism was, in many ways, a historic success. For all the flaws in his handling of the foreclosure crisis, for all the insanity of the early-onset austerity he agreed to in his negotiations with congressional Republicans, for all the unprecedented obstructionism of that same Republican Congress, the fact is that the United States emerged from the financial crisis in better shape than almost any other similarly positioned economy. By the end of Obama’s two terms, wages were growing at their fastest pace in 60 years, unemployment was down to 4.6 percent, and 20 million more people had health insurance. Life had improved—tangibly, if at the margins—for millions. You could fill a book (indeed, a library) with celebrations and criticisms of the Obama administration, but we grade presidents on a curve, and who since Franklin Roosevelt has been a better Democratic president? Given Lyndon Johnson’s shameful legacy in Vietnam, I think the answer is no one.8

As a political project, Obamaism would also appear, at first blush, to be a staggering success. For the first time since FDR, a Democratic president won a majority of the vote in two successive elections. But the Democratic Party was eviscerated during Obama’s eight years, losing Congress and going from 29 to 18 governorships and from total control of 17 state legislatures to just six.9

Part of this is the natural entropy of governance: The party in power bleeds political capital. But something else happened at the level of political narrative, which is that the Democratic Party under Obama became associated with institutionalism. Its message was: Things are getting better; America still works; just hang on, because daybreak is around the corner. This allowed the Republicans—the party of plutocracy and deregulation and the US Chamber of Commerce—to become, in the person of Donald J. Trump, the insurrectionist party, the party of those who believe, as Trump said so many times, that “the system is rigged.” And it turned out there were enough people who cottoned to that message, spread out among enough swing states, to deliver a manifestly unqualified fraud to the White House, even if he had some 2.7 million votes less than his opponent.10

Among white voters, perhaps the most salient demographic division is between those who have a college degree and those who don’t. The former group went for Trump 48 to 45 percent (a slimmer margin than Mitt Romney’s by 11 points), whereas whites without a college degree voted for Trump by a staggering 67 to 28 percent. That’s almost exactly the same margin by which Latinos went for Hillary Clinton.11

One way of thinking about this is that the white working class started voting like a minority group. It makes a perfect, perverse kind of sense that a college degree would represent such a hard dividing line, since our modern meritocratic social contract is so predicated on earning a four-year degree. If you do, you get to become part of the American dream, and if you don’t—well, basically, you’re on your own. Obamaism offered substantive and consistent help to those tens of millions of Americans of all races without a college degree trying to escape—or simply to survive within—the vise of modern capitalism. But the story that Obama and the Democrats kept telling was the story of meritocracy and social mobility.12

After the election, I conducted a kind of exit interview with retiring Senate minority leader Harry Reid. I asked him what the Democratic Party stands for, and after speaking of his own upbringing in deep poverty in the rural town of Searchlight, Nevada, he said: “People have asked me the last year, ‘What message do you want to leave with people?’ And here’s the message: I want everyone in America to understand, if Harry Reid can make it in America, anyone can. And I want those young men and women out there who are looking for a way out to realize, if Harry Reid can make it, anybody can. That’s what America is all about.”13

This is, in some ways, a perfect summation of the Democratic Party’s message in the Obama era: In America, anyone can make it out, anyone can rise to the highest heights. Immigrant, native-born, black, white, disabled, gay, straight, male, or female—no matter your background, there’s a place at the top for you. Even if this were perfectly true (and it’s not), we’re now seeing what happens when the Democratic Party is perceived, by white working-class people at least, as the party for those who make it out. But millions didn’t make it out—so who champions them?14

The answer is that someone came along and more or less said, “Fuck all that. You won’t have to go to college to live your dreams; I’ll deliver them to you myself. I’ll reopen the coal mines. I’ll wave a magic wand, and this place that’s been pummeled will be restored. You can stay here and live your dreams. Your town can be great again.”15

I think Obama recognized the need to speak to the dislocation and alienation of the Americans who didn’t make it out as well as anyone. There’s a reason he won all those counties that Trump flipped: It was Obama’s extraordinary political talent to connect with citizens from all walks of life that made him one of the greatest figures in American history. A century from now, schoolchildren will be celebrating his birthday.16

But I’m left to wonder what it must be like inside his head now. Does he have a blissful moment every morning where he wakes up with no memory of what happened in November, a sweet morning calm before remembering the catastrophe? And I also wonder if that blissful moment before reality sets in is how we’ll remember his presidency.17