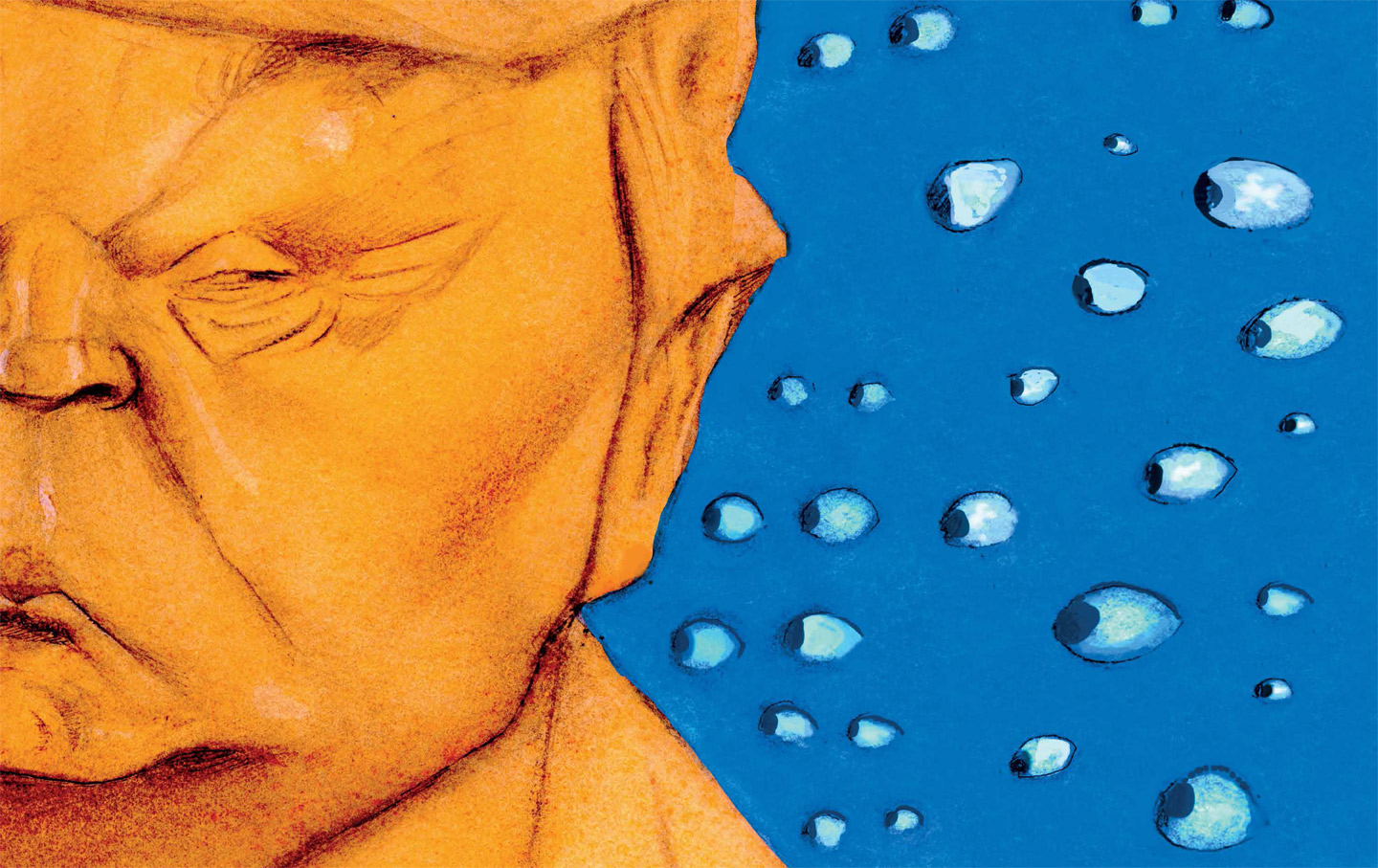 In the wake of Donald Trump’s unimaginable victory, the traditional rituals were observed. Hillary Clinton gave a graceful concession speech; President Obama and Trump called for Americans to come together. The only true response was provided in the streets, as young activists from the civilizing movements of our time mobilized by the tens of thousands against fear and hate in cities across the country. They put Trump on notice: He has won the White House, but not the country. Trump and the Republican Congress will set the agenda, but there will be no free pass.

On his road to victory, Trump upended the establishments of both parties, dispatching the Bush and Clinton dynasties. His right-wing populism mobilized voters against the elites, whom he accused of coddling “those people”—Muslims, immigrants, people of color, women—but what Trump will actually do in office remains the great unknown. In the effort to govern, will he be captured by the Republican establishment that he so actively scorned?

In October, Trump released an ambitious 100-day agenda that lays out a map of the battles to come. First, he promises to undo all things Obama. He’ll reverse Obama’s “unconstitutional” executive orders. He’ll “repeal and replace” Obama­care, roll back bank regulation, and cripple the Consumer Financial Protection Bureau. He has pledged to undo Obama’s environmental plan, lifting restrictions on oil and gas production on public lands and withdrawing from the Paris climate agreement. He’ll tear up the Iran nuclear deal. He’ll ramp up deportations, suspend immigration from “terror-prone” areas, cancel funding for sanctuary cities, and find money for his wall. He’ll nominate a Supreme Court justice in the Scalia tradition.

Trump has also embraced the Reagan trickle-down agenda: tax cuts for corporations and the wealthy, deregulation, freezing federal employment, and further dismantling the government. The first test is likely to be a massive tax break for companies with trillions of dollars in profits stashed abroad: Instead of the 35 percent corporate tax rate, Trump proposes a “repatriation” rate of 10 percent. The revenues will be tied to an infrastructure plan intended to appeal to workers and attract the support of Democrats. Trump promises to “drain the swamp” in Washington, with new restrictions on legislators and White House staffers becoming lobbyists. He promises a muscular trade policy that includes renegotiating NAFTA, cracking down on China as a currency manipulator, and imposing tariffs on companies that ship jobs out of the United States.

Trump’s foreign policy is truly a black box. He’ll probably seek better relations with Russia, aimed at coordinating the fight against ISIS in Syria. He’s pledged to get our allies to pay their fair share of the defense burden. He’s likely to be more unilateralist and, hopefully, less interventionist than Obama. Even so, a first test here will be his pledge to increase the military budget dramatically.

For progressives, the coming Republican rule  forces a day of reckoning. How do we respond to rebuild a majority? How do we take on the right as it seeks to drive its agenda forward?

We must not give in to despair. Trump won the White House, but not the country.

First, we should not give in to despair. Trump won the White House, but not the country—not even a majority. He ran a hateful campaign, but voters are better than that. Exit polls showed that 70 percent support a path to citizenship for undocumented immigrants, and 54 percent oppose building a wall. Seventy percent don’t approve of Trump’s treatment of women. Republican governors are learning not to challenge equal rights for the LGBTQ community. America is still becoming a more diverse, more tolerant, and more socially liberal nation.

Trump won because working-class voters repudiated the political elites who failed them. Nearly three out of four voters believe that the economy is rigged to the advantage of the rich and powerful. Over 65 percent believe that the two traditional parties don’t care about people like them. Clinton personified the establishment that had enriched itself while championing policies that devastated working people and entire regions of the country. Trump’s right-wing populism proved the perfect foil for the New Democrat formula of Wall Street plus identity politics. The question now is: What rises from the ruins?

Democrats must put forward a clear and compelling opposition  to Republican rule. For this to happen, the San­ders-Warren wing of the party must lead. Progressives should embrace and add to those parts of the Trump agenda—scuttling the Trans-Pacific Partnership (TPP), putting restrictions on lobbyists—that make sense. But they should oppose all of those items that betray Trump’s promises to working people, like the top-end and corporate tax cuts and the assault on environmental, consumer, and worker protections. As a minority in the Senate, they can stop some of the worst horrors. But their more difficult task will be to make clear that there is an alternative, that growing inequality and increasing insecurity aren’t the inevitable result of globalization and technology. It’s a matter of choice—of policy and power.

That will require a battle within the Democratic Party. Its Wall Street wing isn’t going away. Already, there are those in the party who argue that Clinton lost because she was too liberal on immigration and choice, that Bernie Sanders’s left-wing populism can never beat Trump’s right-wing version, that the party should embrace an even more business-friendly economic policy. Democrats will be particularly tempted to give Trump his corporate tax breaks in exchange for a major infrastructure plan. That will help lift the economy and create some good jobs in the short term, but conservatives will use the declining tax base to sap public investment and put ever more pressure on Medicare, Medicaid, and Social Security.

The Obama coalition can’t be consolidated if it throws working people under the bus. Democrats have to speak to the real needs of working families. Thanks to San­ders, the party platform contains a decent first draft for such an agenda: infrastructure projects to put people to work, breaking up the big banks, fairer taxes on corporations and the rich, cracking down on excessive CEO pay, supporting fair trade and tuition-free higher education, and a green New Deal to address climate change. Progressives need to clearly tell the story of how our corrupted politics and rigged economy have put people into the hole they’re in, and how a more ambitious agenda will help get them out.

Critical to the next period will be the efforts of Our Revolution, the organization that emerged from the Sanders campaign, and its allies: People’s Action, the Working Families Party, MoveOn, Democracy for America, and others. The success of Our Revolution will depend on whether its supporters stay engaged, both as small donors and as organizers. It will focus on developing volunteer structures in states to recruit and support populist candidates up and down the ticket, while driving strategic national-issue battles that can help move progressive reform and deepen public awareness. In New Hampshire and Nebraska, and potentially in other states, the Sanders people have taken over the state Democratic Party structure, opening the possibility for experiments in how a real progressive party might organize.

Republicans now have total control of the statehouse and legislature in a record 24 states and will be able to push a corporate and conservative wish list of legislation. Democrats have control in just six. Even so, with reform impossible at the national level, progressive groups should be stepping up efforts to develop emblematic reforms at the state and local levels that can help drive a national message. Republicans have stymied efforts to increase the minimum wage nationally, but the Fight for $15 continues to push successful reforms and initiatives in cities and states. Groups like People’s Action, with affiliates in 29 states, can help move issues at the same time. Progressives in Congress can give these efforts national recognition and sharpen the contrast with the right.

The Obama coalition can’t be consolidated if it throws working people under the bus.

Similar efforts are already moving forward on paid sick days and family leave, fair hours, wage theft, and more. This agenda can be expanded. Progressive taxes for public investment—creating green jobs or funding universal pre-K—can attract majority support. New efforts to use public procurement to develop local suppliers, or to give preference to companies that recognize their workers’ right to organize, are promising. Creative efforts to penalize companies with excessive executive-pay structures need to spread.

On foreign policy and national security, Democrats have allowed liberal interventionists to define their playbook, despite a deplorable record of endless wars without victory leading to failed states. Obama also embraced extreme assertions of executive power—to make covert and overt war, undertake mass surveillance, imprison without due process, target people for assassination, and more.

Progressives should force a fundamental reassessment of our national-security strategy, defining a new conception of how we live in the world and a reassertion of constitutional limits on the presidency. Progressive legislators can help lead this effort and give it greater recognition, but it will gain little traction unless bolder citizen movements build to challenge our endless wars, the increasingly threatening developments on the nuclear-arms front, and our catastrophic retreat from leading on climate change.

These are dangerous times. Trump has stoked hatreds and divisions that could grow ever more perilous. His denial of climate change could be literally calamitous. His disinterest in policy suggests that he’ll probably become captive to a Republican Congress increasingly dominated by the extreme right. His Supreme Court nominee will surely revive the Court’s right-wing majority.

But neither Trump nor the Republican right have answers for the working people who elected him. Trump may torpedo the TPP, but he hasn’t a clue about what a sensible trade policy would be. A Republican Congress will block any efforts to empower workers, lift their wages, secure their retirements, and make education and health care affordable. The buyers’ remorse will set in quickly.

Citizen movements—the Fight for $15, Black Lives Matter, the Dreamers, 350.org, and others—drove reform in the Obama years. Now these same movements will have to mobilize to fend off reaction. Progressives in the House and Senate need to take over the Democratic Party’s agenda and message. New populist energy can drive important reforms at the state and local level, and recruit and train a new generation of populist candidates. Democrats don’t need to abandon their social liberalism; they need to develop their economic populism. If they do, the Trump era may turn out to be as short as his attention span.