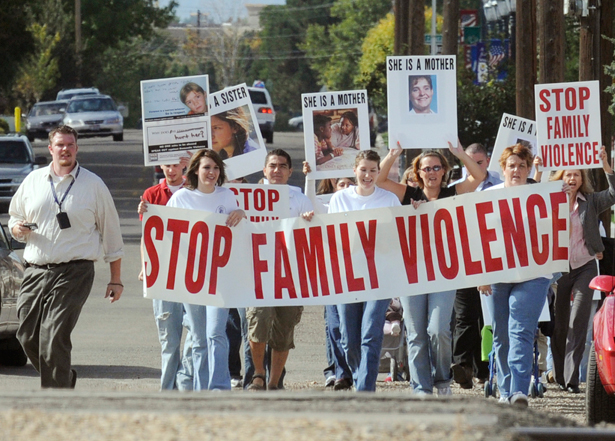 Saturday marks twenty years since the Violence Against Women Act was signed into law. The country has made real progress toward reducing domestic violence, thanks in many ways to VAWA. Domestic violence incidents rates have dropped 64 percent since 1993; murders have also decreased. VAWA vastly expanded resources for shelters, crisis centers and hotlines, as well as education programs, safe public transportation and research, all meant to prevent violence.

But violence is still all too common. About three women will be killed by their partners every day. Domestic violence is the leading cause of injury to women ages 15–44.

Clearly, there is work to be done. And much of the unfinished work of VAWA is increasing the economic security of women in abusive situations.

Intimate partner violence and economic status are inextricably intertwined. Three-quarters of victims say they stayed with their abusers longer because of economic reasons. It’s not hard to see why: a woman leaving an abusive partner will need housing and employment to stay independent, but both are put at risk by the abuse itself. Workplaces are public spaces that can be easy for abusers to access: the leading cause of death for women at work is homicide. And controlling women financially by threatening their jobs is a way of making them stay longer.

Yet in forty-three states, there is no legal protection to keep women from being fired because they are victims of domestic abuse. Just four states that do have protections go further and mandate that reasonable accommodations, like changing phone numbers or desk locations, be given to victims so they can stay on the job without risking their health.

The lack of employment protections can lead to situations like the one Carie Charlesworth, a teacher in California, found herself in. Her abusive husband invaded her school’s parking lot and put the school on lockdown—and then the school fired her because of the endangerment. Many women go through this: in a study of thirty-two women in abusive relationships, 91 percent ended up fired or resigning from their jobs because of their abuse. Firing someone for these reasons doesn’t just re-victimize her, it also cuts off a lifeline she’ll need to be able to escape the situation.

A federal law to protect all victims from employment discrimination was introduced in March, but it hasn’t even been referred to committee or scheduled for a vote.

Troubles don’t end for women once they’re fired for their abuse, however. Eighteen states ensure that these women can get unemployment benefits, but women in the remaining thirty-two may not even be able to tap that lifeline once they’re out of work, leaving them even more vulnerable. Ensuring that all women can get unemployment benefits if their abusers succeed in getting them fired would create the most basic baseline of support.

Housing is also a huge issue for victims of violence. As Monica McLaughlin of the National Network to End Domestic Violence told MSNBC’s Irin Carmon, “When we do our survey every year, we ask service providers, ‘What are survivors asking from you?’ And housing rises to the top every time.” Nearly 10,000 victims are turned away from services on a typical day, and more than 40 percent of those women are seeking emergency housing, while 18 percent need transitional housing. Twenty percent of homeless women say that domestic violence is the primary reason they don’t have housing.

And over the past twenty-five years, communities began adopting “crime-free housing” ordinances, which mean landlords can kick out tenants who have a certain number of visits from police. That may mean victims of abuse face a choice between calling the authorities when they’re being hurt and risking eviction or not calling and staying in their homes. RH Reality Check’s Annamarya Scaccia found sixty known ordinances like these around the country. VAWA protects those in federally subsidized housing, while twenty-five states and Washington, DC, have laws that are meant to protect victims from eviction. But some, such as North Carolina’s, are weak—merely prohibiting housing discrimination against victims. In all other states, victims put their private housing at risk simply for calling for help.

There are certainly other measures that can protect more women. As Carmon writes, it can be all too easy for an abuser to get a gun, something that significantly increases the chance that a woman will be killed by her partner, and there are ways to keep those guns out of abusers’ hands. Increasing funding for existing services, which have been starved in recent years, would also help. But until we address the economic barriers victims face, many will continue to be trapped in dangerous, and often deadly, situations.