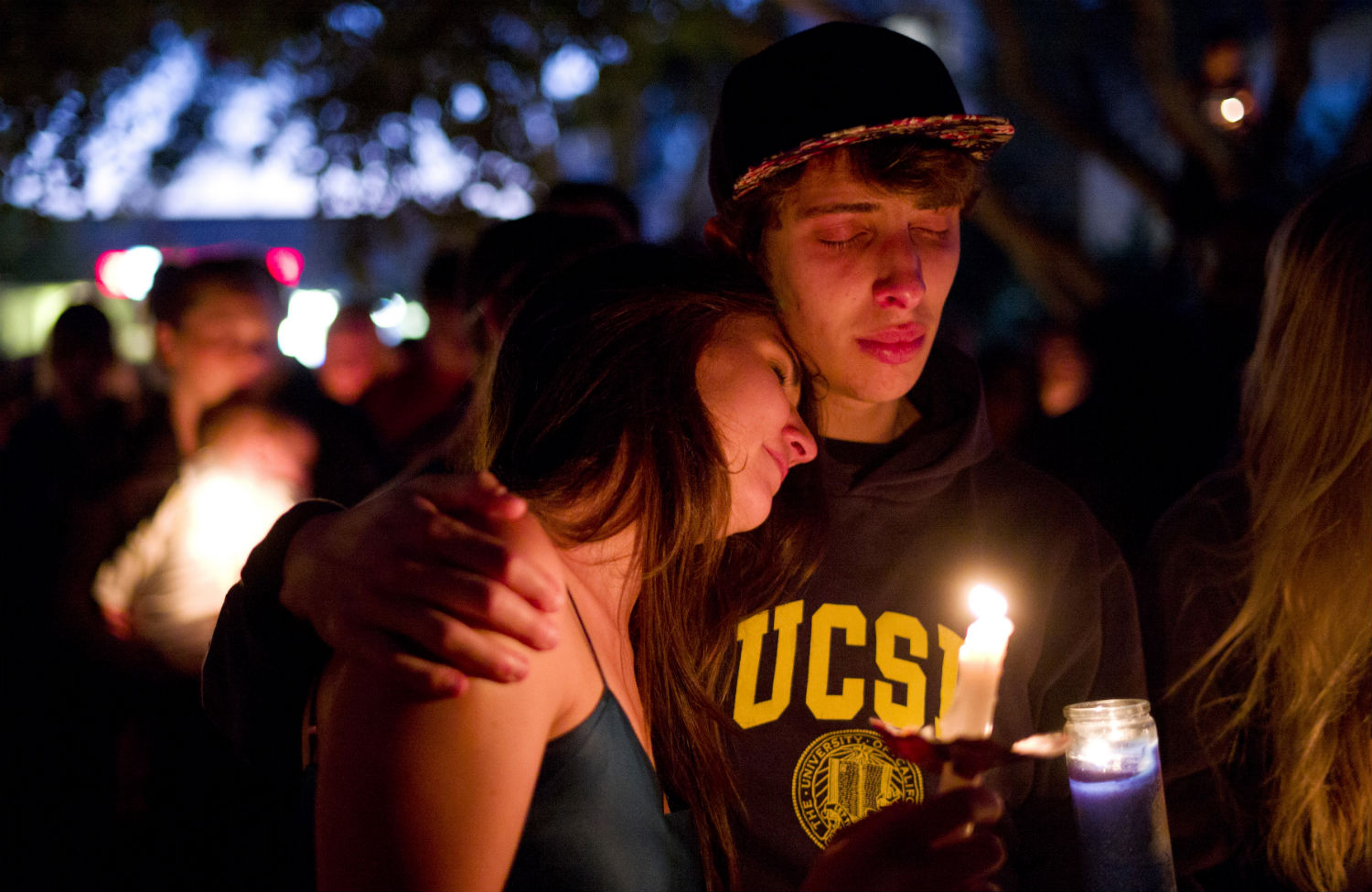 Students and faculty at the University of California–Santa Barbara are understandably in shock after the murder of six innocent people Friday in the Isla Vista community that borders the campus. Over the next few weeks, there will be many memorial services, tributes and other events to remember the victims and provide family and friends with opportunities to mourn. But if UCSB students, alumni, faculty and staff want to channel their feelings into constructive action, here’s a suggestion: ask the University of California Regents if its $88 billion endowment is contributing to gun violence by being invested in gun companies that fund the National Rifle Association (NRA) and obstruct common-sense gun policies. If it is, demand that the UC system divest itself from these merchants of death.

America mourns with the families affected by this latest mass shooting. We face the responsibility to work together to stop the epidemic of gun violence.

“Not one more,” said a heartbroken Richard Martinez, the day after his 20-year-old Christopher, a UCSB student, was killed in the Isla Vista tragedy. “Why did Chris die? Chris died because of craven irresponsible politicians and the NRA. They talk about gun rights. What about Chris’s right to live?”

The following day, Martinez made additional comments: “There’s a tendency to think that this was a madman and that we can’t do anything about it. I think that’s an easy out. I don’t believe it. I know this is a complicated problem but I do believe it has a solution.”

Martinez is right. There is a solution, and it starts with putting economic pressure on the gun industry. The companies that manufacture guns and ammunition and the NRA are responsible for the United States having the weakest gun laws among modern democracies. In April of 2013, a few months after the Sandy Hook massacre, the gun lobby killed legislation to extend background checks for gun sales, ban assault weapons and limit the size of guns’ ammunition magazines.

The NRA has even used its political clout to block medical and academic research that would help us understand and end the epidemic of gun violence. According to ProPublica, “Since 1996, when a small CDC-funded study on the risks of owning a firearm ignited opposition from Republicans, the CDC’s budget for research on firearms injuries has shrunk to zero.” Last week, Senator Ed Markey (D-MA) filed a bill that would fund the CDC research. The NRA issued a statement calling Markey’s bill “unethical” and an “abuse of taxpayer funds for anti-gun political propaganda under the guise of ‘research.’”

Although the NRA likes to portray itself as representing grassroots gun owners, only about 4 million of the 90 million American gun owners are NRA members. The bulk of the NRA’s money comes from gun and ammo manufacturers that donate millions of dollars to further political obstructionism and fear-mongering among a small but vocal minority of gun owners. The gun makers’ profits—and the profits of Walmart (the nation’s largest seller of guns and ammunition) and other retailers—grow when there are few restrictions on the sale and ownership of guns and ammunition.

“There is a lot of profit to be made for all of this sorrow, all of this death, and all of this destruction,” said Dr. Sheldon Teperman, director of trauma surgery at the Jacobi Medical Center in New York City, who routinely deals with gunshot victims and who was interviewed for a video urging people to unload gun companies from their 401k investments.

The gun industry—led by Remington Outdoor, Sturm Ruger, Smith & Wesson and Olin—has profited, even as more Americans die by the products they manufacture and aggressively market. The value of these companies has grown significantly just as the rate of mass shootings has increased.

Cerberus Capital Management owns Freedom Group, maker of the Bushmaster XM-15, which Adam Lanza used at Sandy Hook Elementary School to massacre twenty children and six educators in minutes. Cerberus promised to sell the gun maker, but after eighteen months it has not yet done so.

Sturm Ruger is the manufacturer of assault weapons banned in California and in 2012 donated over $1.25 million to the NRA through a program of selling guns and donating $1 for each gun to the lobby group.

Smith & Wesson is the maker of the assault weapon used in the Aurora, Colorado, and LAX airport shootings and the semiautomatic pistol used at the recent Fort Hood shooting. Smith & Wesson recently gave the NRA a check for $600,000 to continue its work promoting guns and gun culture.

Olin owns Winchester Ammunition, an NRA donor of between $500,000 and $1 million and maker of ammunition intended to quickly expand inside the body, leading to greater human damage.

By divesting from these companies, we bring a new kind of pressure to bear on the forces of obstruction that Martinez called out. Divestment was a useful tool in the anti-apartheid efforts in the 1980s and again in bringing the tobacco industry to the table in the 1990s.

University endowments play a special role here, given the escalation of gun violence in our school and college campuses. According to Everytown for Gun Safety, at least seventy-two shootings have occurred on school campuses in the seventeen months since the Sandy Hook massacre. In 2010, the most recent year for which data is available, gun deaths—homicides, suicides and accidents—were the second-highest reason for death of young people ages 15–24, after only automobile accidents, according to a recent Center for American Progress report. Universities should lead to ensure that they do not further the epidemic of gun violence by financially supporting the companies that profit from the devastation of young people’s lives.

That is beginning to happen. In February, Occidental College became the first higher education institution to pledge to stay away from any investments in companies that manufacture military-style assault weapons and high-capacity ammunition magazines for general public sale. The college’s trustees did so at the urging of faculty and students who were horrified by the epidemic of gun violence, including those at schools and universities across the country. It turned out that Occidental’s endowment did not have investments in such companies, but its board’s policy ensured that it would not add any such stocks to its portfolio in the future.

Last year, the California Public Employees’ Retirement System (CalPERS) and the California State Teachers’ Retirement System (CalSTRS), both large public pension funds, moved to divest from manufacturers of assault weapons. The University of California endowment is one of the largest in the country. If the UC system announced a similar policy, it would have a huge impact, inspiring other universities to follow its example.

Media coverage of the Isla Vista tragedy has primarily focused on the details of the rampage, the mental problems, loneliness and anti-women manifesto of killer Elliot Rodger, and the grieving of the families and friends of Rodger’s victims. Rodger was seriously mentally ill. So was Adam Lanza. There are lots of such people in this world. But if we make it easy for them to obtain guns, they are more likely to translate their psychological problems into dangerous and deadly anti-social behavior.

Guns are a large part of American culture. Few object to the manufacture and sale of rifles used in hunting, a sport that millions of Americans enjoy relatively safely. But according to a CBS News poll last December, 85 percent of all Americans—including 84 percent of Republicans, 92 percent of Democrats, 81 percent of independents and 84 percent of gun owners—favor a federal law requiring background checks on all potential gun buyers.

Some will point out that Rodger passed background checks and purchased his Glock 34 and SIG Sauers weapons legally. That simply suggests that we should made it much more difficult for people to purchase assault weapons. In fact, a Rasmussen Reports survey in December revealed that 59 percent of likely US voters think there should be a ban on the purchase of semi-automatic and assault-type weapons. Only 33 percent disagree.

That’s the only way to prevent mass killings like we witnessed in at Sandy Hook Elementary, at Columbine High School and Virginia Tech University and last week in Isla Vista.

Our communities—especially students from kindergarten through university—are bearing the brunt of gun violence while corporate executives reap the financial rewards. Our institutions of higher learning should not profit from the violence that is wracked upon their students, whom schools are pledged to care for.

Toward that end, the University of California should join with major pension funds, unions, religious organizations and individuals by withdrawing its investments from gun manufacturers that profit from the violence wracked on our schoolchildren. We can stop the madness. We can learn from this horror, and even as we grieve, we can move forward.

Editor’s Note: This piece was edited slightly after publication.