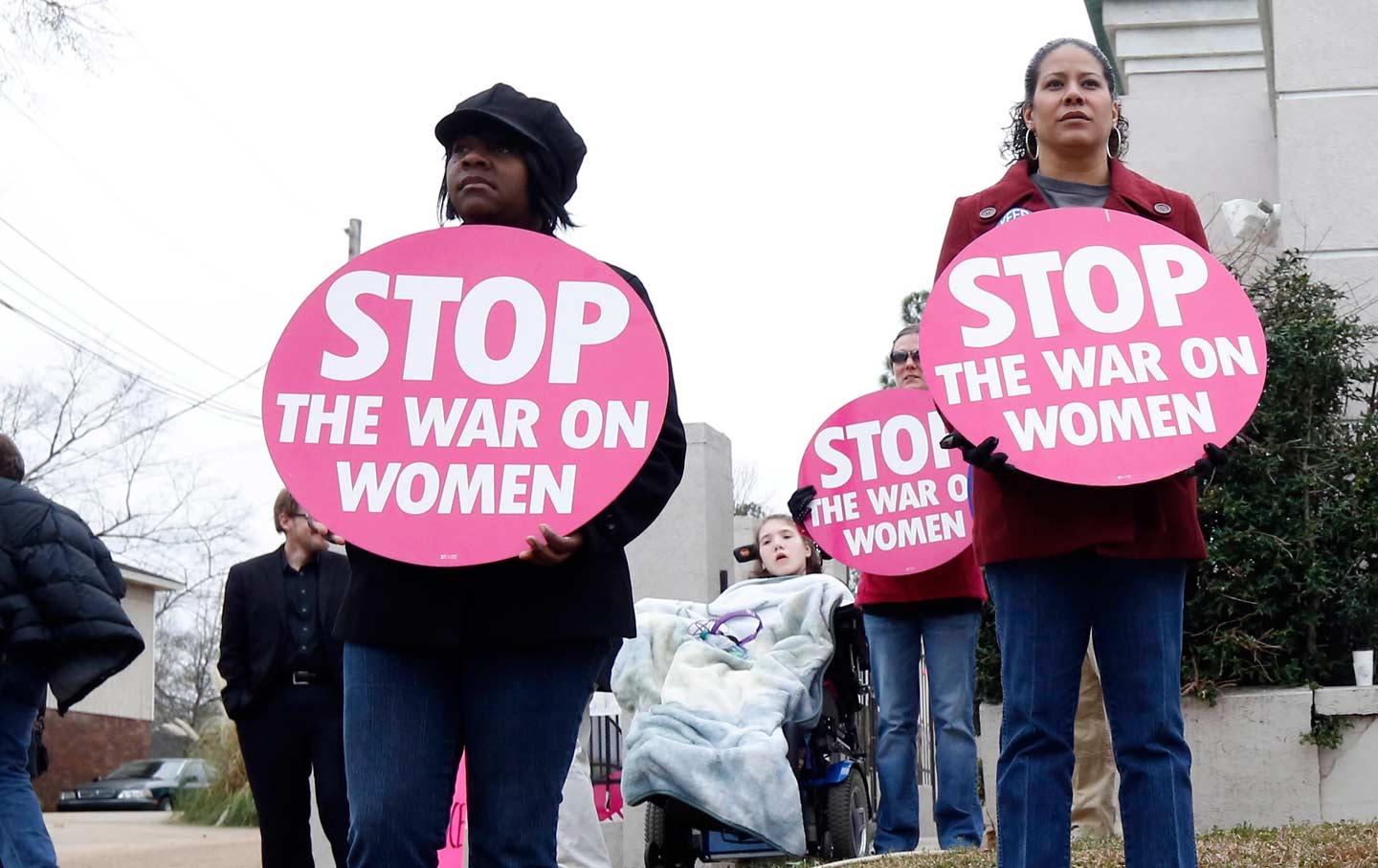 The course of feminist progress never did run smooth. That may not be a comforting thing to acknowledge, in November of 2016—now that we’ve elected a white-supremacist beauty-pageant mogul with over a dozen outstanding sexual-assault allegations, and potentially handed the Supreme Court over to a conservative supermajority that could effectively erase most of the second wave’s gains—but it’s true. Every feminist stride forward has been accompanied by backlash; the forthcoming Trump administration is just one more dark period in a history where bursts of light have always been the exception. The question is how to keep the movement alive, or at least on life support, until real progress is possible again.

The pattern laid down by history is clear. The first major book of feminist theory in the West, Mary Wollstonecraft’s A Vindication of the Rights of Woman, was shockingly popular when it was published in 1792. Key figures in American politics—John and Abigail Adams, Aaron Burr—studied it with care and reverence. If things had gone only a little differently, the United States might have been founded as an explicitly feminist nation. But Wollstonecraft died, and the posthumously revealed details of her sexual life and mental illness were used to conduct a campaign of character assassination, until feminism itself became tainted by association. That led to the 19th century and the Victorian era, whose institutionalized misogyny and sexual conservatism still comprise the backbone of most anti-feminist thinking today.

The cycle repeats. The 19th century did, eventually, give us the suffrage movement—but white women gaining the vote did not prevent the harshly enforced racist patriarchy of the early 20th century. By the 1960s, the Father Knows Best era had gotten unbearable enough to give us the second wave—which, after making rapid cultural and legislative progress throughout the ’70s, met the freeze-out of the 1980s through the 2000s. Throughout the 2000s, an independent women’s-media movement, facilitated by the rise of blogging, broke the taboo on talking about gender politics. It so effectively mainstreamed the feminist movement that, by the early 2010s, mainstream journalism and pop culture alike rode its coattails. Now, right on schedule, we have New York Times op-eds on why liberals should stop talking about “identity politics.”

Granted, Trump’s more-than-flirtation with fascism will make this particular cycle worse. Some, like journalist and scholar of authoritarian regimes Sarah Kendzior, see no hope at all for feminist progress: “We need to prevent the Trump regime. There will be no organizing under it,” Kendzior told me. “If we go forward under his regime, it will be authoritarianism and there is a decent chance we will be jailed or killed.”

Yet “preventing” the Trump administration is likely impossible: There is no evidence that the Electoral College will swing to Clinton, or that evidence of Russian influence on the election will be investigated deeply enough or quickly enough to call his victory into question. If we believe that Trump will happen, the question then becomes how to slow him down, and how to keep organized and committed to that task.

I asked Andi Zeisler, co-founder of Bitch magazine—which arguably laid the groundwork for much of the 2000s women’s-media renaissance—how her readers’ needs had shifted in times of more intense backlash, like the Bush administration.

“For every reader who had lived through the supposedly post-feminist ’80s and the feminist ’90s, there were more who were just coming of age and coming to feminism in this conservative time and realizing that they needed feminism much more than they had expected to,” Zeisler says. “So to me it felt less like a shift than a continuum. The one thing we did experience was that people were not coming to us just for pop-culture and media analysis. They wanted concrete, actionable information: Who to write to, where to protest, etc. And they wanted to hear more directly from activists.”

Of course, there’s the issue of what that activism will look like and what our goals can reasonably be. In recent years, feminists have had the luxury of playing offense. We could afford the time bitching about millennials’ “entitlement” and focus on micro-aggressions. Now the issue is not just abortion stigma but whether we will retain the right to abortion; not only how the media represents or employs marginalized people but whether the media itself will be free to produce anything but Trump propaganda.

This is painful, not just because of the losses themselves, but because we seemed to be so close to making tangible gains. Policies for paid family leave, more affordable college, and a strikingly ambitious plan to cap child-care costs at 10 percent of a family’s income were all on the table in Hillary Clinton’s administration. She had also vowed to fight restrictions on abortion, defended late-term abortion, and had committed to overturning the Hyde Amendment, which prevents poor women from accessing federal funds for abortion and thus puts it out of reach for many poor women.

Trump’s gender policy is still taking shape, but the early signs—he’s affirmed a commitment to overturning Roe v. Wade, and made moves to forbid single parents from filing as “head of household”—are that we will not just stall out on advancing these agendas but rapidly move backward. That means that defensive activism is the only activism left.

Most feminist activism has taken place not in the bright sunlight but in the shadow of overwhelming and oppressive conditions. Cindy Cooper, of the reproductive-justice organization Words of Choice, points me to the way much pro-choice activism arose specifically in response to the backlash of the Reagan ’80s. She cites an essay by longtime activist Barbara Santee: “Young people must prepare themselves for a lifelong engagement in this crucial war to protect women’s reproductive autonomy,” Santee wrote. “If side A is prepared at any cost to take away side B’s freedom, and side B is saying, ‘It can never happen,’ it will happen.”

In other words: By underestimating the damage that Trump’s extremist right-wing movement is prepared to do to women’s rights, we all but ensure that damage will occur. We can’t relax, and we can’t assume that everything (or anything) will work out.

“I don’t think any backlash ever ended,” Cooper added. “A lot of horrible things have happened in the Obama years, from murders at Planned Parenthood to the vast expansion of state anti-abortion regulations. In fact, historically, it’s been true, I believe, that more bad things happen in the abortion area when there are pro-choice people in office, because the antis go wild. Of course, now we may be facing the worst of the worst.… reproductive rights is an ongoing lifelong battle, and so are all of the fights for civil rights, freedom, and human rights.”