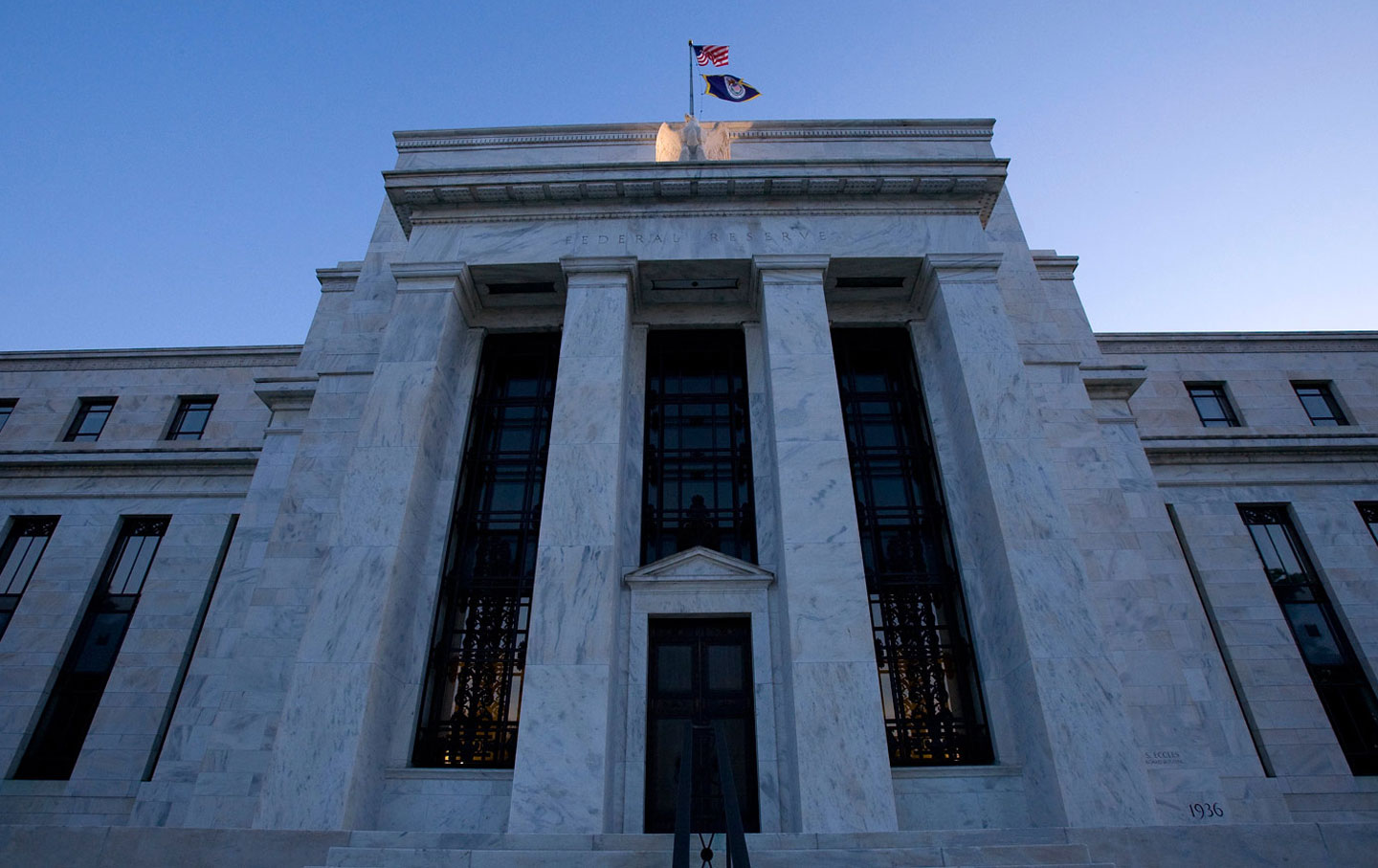 The stock market is jittery from one day to the next because nervous investors want to know when the Federal Reserve will start raising interest rates again. When it does, there is widespread fear that the inflated stock prices might crater. Savvy players would like to get out just before the music stops.

But the Economic Policy Institute, a Washington think tank whose economists like to focus on broader public concerns, has asked the Fed quite a different question. When will wages start rising for working people?

The fragile recovery has been terribly lopsided so far. Improving economic activity is generating new jobs at a healthier clip and corporate profits are robust. But wages are still stuck in recessionary doldrums. Perhaps that is why Middle America remains so gloomy. Its battered finances are not recovering—and in some ways things are getting worse for many families.

“It’s really unbelievable,” said Josh Bivens, an EPI macroeconomist. “The economy and the labor market are still too soft to be thinking about raising interest rates. We are six years after the recovery and we still have labor market slack and we are still almost nowhere on wages. At the moment, we are still on a path that really doesn’t look like a sustainable economy.”

Household savings, he pointed out, increased at first during the Great Recession when families abruptly curbed their spending. But now, in the absence of increasing incomes, family indebtedness is on the rise again. The American economy will not gain a firm foundation, Bivens warned, until families are once again paying for increased consumption out of healthy wage incomes instead of borrowing more.

Bivens has proposed a modest solution in which the central bank could become a discreet agent in encouraging stronger wage gains. The Federal Reserve, he explains, should formally target wages as an important indicator in its complex policymaking processes.

Instead of monitoring only variables like price inflation or unemployment levels or GDP growth, Federal Reserve governors should also base their decisions on the condition of labor-market wages. If wage levels are flat or falling, as they have been for many years, that would suggest a need for looser monetary policy to stimulate the economy—lower interest rates or other government measures that could directly boost labor incomes.

For average Americans, this may sound like a technical fix from an obscure governing institution they know little about—and it is. But alarmed conservatives would denounce the Bivens proposal as radical heresy. In a sense, that is right too.

In the 100-year history of the Federal Reserve System, one its core functions has been to blunt rising wages and prices whenever Fed economists decide the “good times” are out of control and might cause inflation. The central bank puts on the brakes by raising interest rates—slowing the economy or even causing full-blown recession. That puts lots of people out of work and collapses any pressures for raises.

Economist Thorstein Veblen called this harsh discipline “the slaughter of the innocents.” It is nasty work for a government agency in a democracy, and so the Federal Reserve was purposely cloaked in mystery and obscurity. The current recovery, Bivens argues, requires an opposite remedy from the Fed. Instead of suppressing wages to insure against inflation, the government should encourage rising wages from the bottom up in order to restore the broad prosperity that Wall Street collapsed.

To be precise, Bivens calculated that since the recovery that began in the second quarter of 2009, the unit profits in the corporate sector have risen at a 7.6 percent annualized rate. Unit labor costs have been flat and all other costs have fallen. “All of this growth can be accounted for by rising profits,” Bivens wrote.

He does not blame the Federal Reserve, given its earnest efforts to stanch the bleeding with aggressive easy-money policy. Indeed, the Federal Reserve deserves singular credit for preventing an even worse unraveling. But the Fed’s interventions have done next to nothing to alter the financial plight of wage earning families.

Furthermore, the Federal Reserve was directly responsible for engineering the great upward shift in American incomes. Alongside Ronald Reagan’s regressive tax cuts in early 1980s, the Fed under Paul Volcker induced a long, deep recession that essentially broke the back of labor wages while the global migration of US manufacturing jobs was also decimating the ranks of major industrial unions. In other words, the central bank shares culpability along with both political parties for the extreme economic inequality of our time.

Changing the policy targets would require the policymakers to consider broader consequences than monetary economists usually explore. These statistics also have influence over financial markets and corporations, since those realms are setting their priorities in the context of what they expect from monetary policy. The Fed targets can define expectations even if the economy doesn’t fulfill the Fed’s goals.

Bivens, for example, noted that the Federal Reserve under Janet Yellen has pursued an inflation target of 2 percent, though actual inflation has remained far more subdued. “The case for targeting wages for the economy is that meeting the 2 percent inflation target is really weak,” Bivens said. “The logic of the wage targeting idea is that until you see wage increases in a range of 3.5 to 4 percent you can’t see a strong economy.”

There is definitely not much of a chance that the Federal Reserve will adopt such a measure anytime soon. Bivens and some EPI colleagues have met with Yellen and other top Fed officials to explain their proposal, but Fed economists politely made clear their lack of interest. Central bankers typically resist targets because they want to maintain maximum flexibility for their own decision-making.

The traditional conservative objection to wage targeting proposals like EPI’s is the danger of overshooting the goals and winding up with runaway inflation rates. This is a red herring from the 1970s when the Fed was being taunted by Milton Friedman’s harsh attacks. To Bivens, these arguments are ludicrously out of touch with reality. The hard-money theology of Milton Friedman was a big part of what drove the American economy into the ditch.

The right wing fears, Bivens explained, “that inflation-adjusted wages might begin running ahead of economy-wide productivity, hence spurring ever accelerating inflation. But wages for the vast majority of American workers have not exceeded productivity growth in a generation. And price inflation has been steadily declining for more than 30 years.”

Actually, what American working people most need now is a fresh new era of economic doctrine that actively favors them. Overshooting the goals in this regard would be good for the people, but also good for the national economy.

“Given that labor’s share remains extremely depressed,” Bivens wrote, “some overshooting would not be a policy failure. Instead, it would be a proper step toward restoring the economy to more normal conditions.”

The Fed may remain silent but maybe ambitious citizens will light a candle for this idea in 2016.