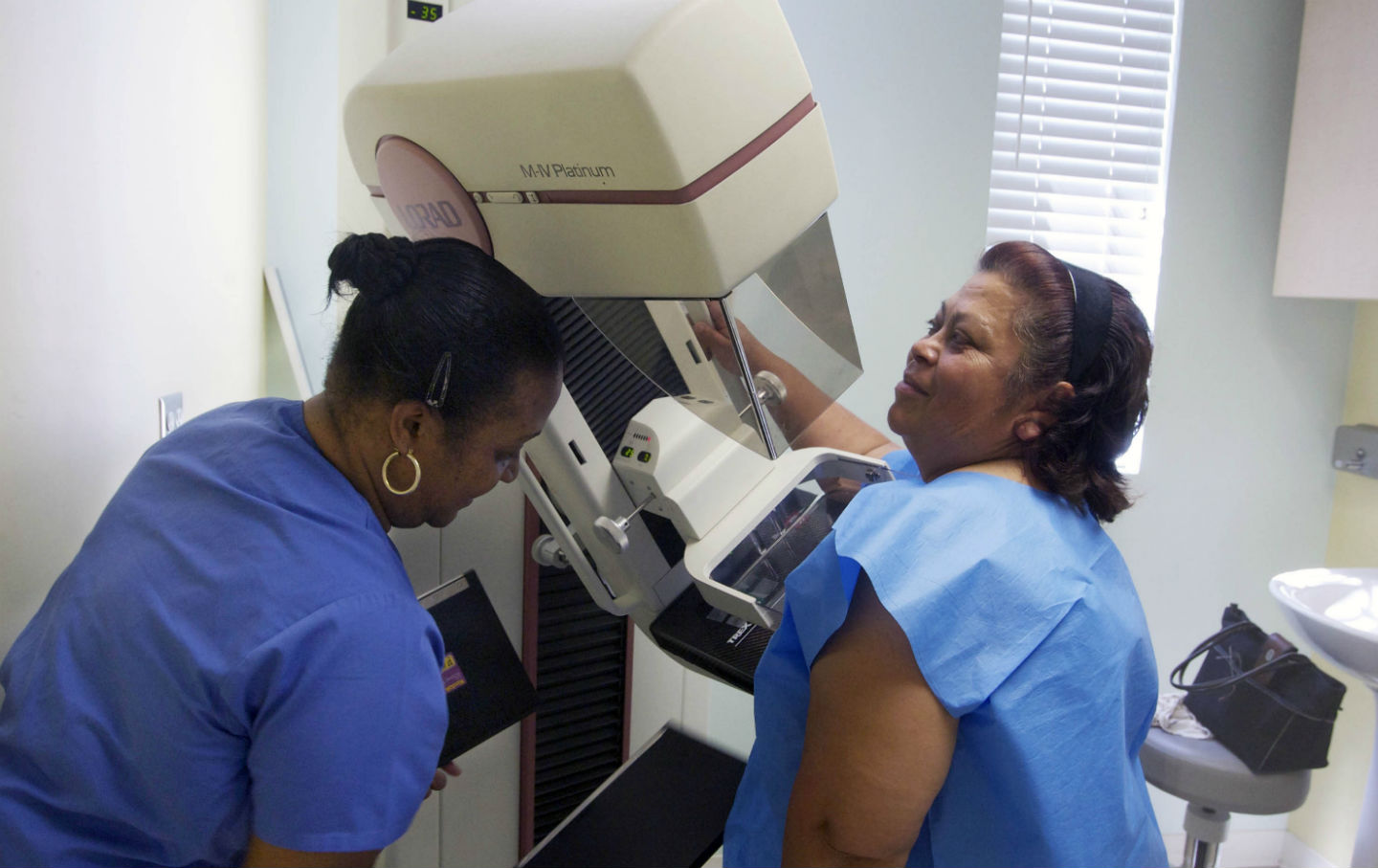 Women in Texas—including many older women well past reproductive age—just fell victim to anti-choice legislators’ obsession with restricting access to abortion. Last week, lawmakers there passed a budget that excludes the state’s Planned Parenthood clinics from providing screenings for breast and cervical cancer. The logic of the budget provision’s supporters goes something like this: One of the things Planned Parenthood does is help people terminate unwanted pregnancies. Terminating unwanted pregnancies is bad. Therefore, Planned Parenthood should be financially strangled and denied state funds that allow it to provide a range of other women’s healthcare services.

It’s simple: “Don’t perform abortions and you get the money,” state Senator Jane Nelson, chair of the Senate Committee on Finance, has said about the plan.

Texans are at especially high risk of developing certain reproductive cancers, according to a report from the National Latina Institute for Reproductive Health (NLIRH) and the Center for Reproductive Rights. The incidence of cervical cancer there is 17 percent higher than the national average, according to the report. Latinas in Texas are the most likely to be diagnosed with it, and Latinas living along the border are 31 percent more likely to die of cervical cancer, compared to women living in non-border communities, Ana Rodriguez DeFrates, Texas policy director of NLIRH, told me. These high mortality rates are associated with the difficulty immigrant women face in getting regular screenings—exactly what Planned Parenthood has been able to offer as a provider through its participation in the Breast and Cervical Cancer Services (BCCS) program. According to news reports, last year the screening program served 33,599 Texans, 57 percent of whom were Latina.

Under the current BCCS program, Planned Parenthood provides 10 percent of screenings statewide. Proponents of the budget change argue that women who need screenings will simply need to look to other clinics in the program. But Rodriguez DeFrates of NLIRH, who testified before the state Senate budget committee on the issue, said that’s not so easy. “Latinas we talk to view Planned Parenthood as a trusted provider,” Rodriguez DeFrates said. It’s a hard-won trust the organization has gained over time, in part by employing promotoras, health workers focused on the kind of community outreach that builds lasting relationships. “To have that provider eliminated from a program that is designed to address the disproportionate deaths from very preventable forms of cancer that occur in black and brown communities.… It’s mind boggling.”

Tanene Allison, Planned Parenthood Texas Votes’ communications director, emphasized the importance of name recognition. She said she hears a similar story from many low-income and uninsured women who have had life saving interventions due to early cancer detection at one of Planned Parenthood’s health centers: They find a lump. They agonize over where to turn, since they don’t have a regular healthcare provider. Finally, someone they know says, ‘What about Planned Parenthood?’

“Once they remember Planned Parenthood, it’s an entry point to the BCCS program. These women likely don’t know BCCS as a program. They are not able to research providers in a program they’ve never heard of,” Allison said. “It’s hard to gauge how challenging it will now be for these women to figure out where to go.”

If the 2011 attack on Planned Parenthood is any indication, many women will just go without care, Rodriguez DeFrates of NLIRH said. She pointed me to a clinic in the Rio Grande Valley that’s now called Access Esperanza. It used to be a Planned Parenthood, but was forced to disaffiliate and change its name in order to survive those earlier funding cuts. When that clinic reopened its doors, it was clear that families in the community hadn’t gone elsewhere for services. According to a letter from the CEO on the clinic’s website:

When we reopened our clinic doors in Mission last September, we learned how much our patients relied on us for basic health care. Within the first eight weeks of reopening, we saw many more people with serious health problems, including cancers, as we usually treated in a year the closure. Patient after patient said that when our clinic closed, they could not find affordable care elsewhere and had received no medical care since the closure.

More than 15,000 Texans signed onto a petition urging the legislature to reject the provision, to no avail. Texas Governor Greg Abbott, a Republican, could use his line-item-veto power in the coming weeks, though no one expects that he will. In the absence of additional challenges, Planned Parenthood will be able to continue providing cancer screenings through September. Then Texans will have to brainstorm harder and research longer when they find themselves in the midst of a health scare.