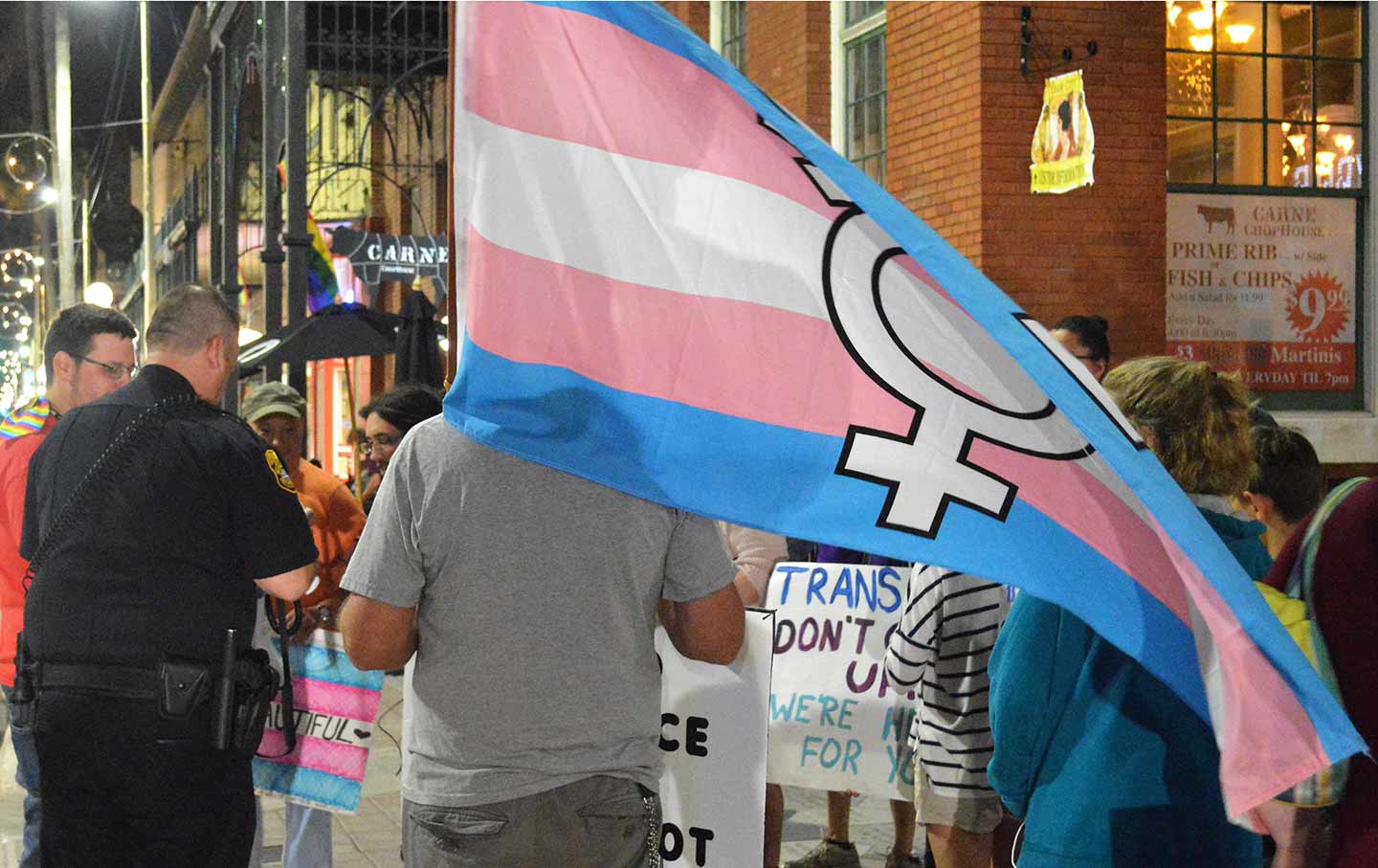 TAMPA, FLA.—If you’ve been to a gay-pride parade, you’ve seen the kind of street preachers who gather on Friday evenings in Ybor City, a neighborhood in eastern Tampa. The street corner they choose is deliberate: It’s in the center of the neighborhood’s LGBTQ district, known locally as GaYBOR. The group—five this evening, though the size varies weekly—launches into shouts of Bible verses through megaphones at around 10 ᴘᴍ, just when the lines are starting to form at the many LGBTQ bars on the street. Some hold signs with message like “Homos will burn.” One preacher points at a man waiting in line and yells, “You’re going to hell.”1

They’ve been showing up in front of the same 7-Eleven every Friday for at least the past year and a half, condemning club-goers and demanding they repent.2

Sixty-one-year-old Carl Junstron said he came out to preach God’s requirements for heaven and hell, and said the preachers just want a civil conversation and that their signs—riddled with homophobic slurs—speak to God’s wrath. “They need to repent from their sins,” he told me, “and turn to God.”3

But after Trump’s election, Tampa’s LGBTQ community had enough. Days after the voting, a small group of local LGBTQ activists posted up across the street to shout their own messages through bullhorns and signs: “Trans is beautiful,” they chanted over the club music, “We’re fabulous, don’t fuck with us.”4

Aaron Muñoz, co-founder of the LGBTQ activist group Out and Loud FL, said the counter-protest started as a group of about six or eight people with rainbow flags who wanted to voice opposition. Over the next few months, it grew to 20, then 50, and now sometimes over 100 come out each Friday to what they’re calling the “Wall of Love.” Though Tampa’s LGBTQ population is sizable—slightly ­­above the national average—it’s not necessarily the long-term residents who brought the spike in numbers. Muñoz says it’s the students.5

The Tampa Bay area is one of Florida’s higher-education hot spots, home to two universities and several colleges and community colleges. But because the campuses mirror the area’s urban sprawl, stretched across many miles and cities, student movements find it difficult to gain traction. The University of South Florida, for example, has four campuses that are hours away from each other. Its main campus is known as a commuter school, with few staying on campus the full day and only 21 percent of students living there.6

University of South Florida student Sarah Zaharako, 20, heard about the Wall of Love through Facebook. She said the weekly protest provides an opportunity for LGBTQ activism that she struggled to find on the USF campus. “It’s taken me a lot longer to find things that I can be involved in on campus through activism than it has been finding things throughout Tampa,” Zaharako said.7

Instead, Tampa Bay–area students have to find other ways to show solidarity. That they have, Muñoz said, has made all the difference for the Wall of Love. “If it wasn’t for the students showing up, it still might be a group of 20 people,” said Muñoz. “Students are really what made this a movement.”8

And now, Zaharako said, students are taking what they learned in Ybor back to campus as they confront the same preachers who have started to show up at USF in a “repent sinners” truck each Tuesday. In response, a group of students, calling themselves the Equality Union, chalk positive message such as “You are loved” around them and sing songs together, like Lady Gaga’s “Born this Way.” Zaharako said she learned this tactic at the Ybor Wall of Love; it’s intended to create a similar communal atmosphere. “I’ve made a lot of connections through going to the Wall of Love,” she said, “and I’ve learned a lot about myself.”9

Jaime Sykes, a USF grad student, also heard of the Wall of Love through social media. The 21-year-old had been called homophobic slurs in public and had her tires slashed twice in the Tampa area. She was targeted, she thinks, because of her sexuality. “These preachers are just one visible instance of verbal violence that queer people face on a regular basis,” said Sykes. “I wanted to be part of providing a counter-message for my community.”10

In fact, the Wall of Love has grown to the point that people passing by hardly notice the preachers at first. “They ask what’s the big gay event,” Muñoz said. “A friendly and welcoming place for everyone—we’ve reached our goal.”11

The Wall of Love brings out activists of all ages­. High-school students breaking curfew chant alongside young queer parents. Sykes said that after she passed out flyers for the Wall of Love on the USF main campus, classmates, colleagues, and even a professor started to attend.12

“We need to make it clear what kind of community we want to live in and what kind of behavior Tampa will not allow,” said Out and Loud FL co-founder Courtney Bermudez, 32. “We are the future of this community.”13

Community organizer Dayna Lazarus, 27, said the Wall of Love helps show students that there’s an active and supportive LGBTQ activist community nearby. Lazarus, who’ll be a master’s student at USF in the fall, said when she told a couple who’d just moved to Tampa to attend USF about the Wall of Love, one was on the verge of tears. He told her that he and his partner hadn’t yet seen many LGBTQ activists or a pride community until they’d ventured to Ybor.14

“He was so happy to see it,” Lazarus said. “He said he felt really encouraged and thankful that this activism community exists in the place he finds himself for school.”15

Muñoz had worried the Wall of Love would be counterproductive—just more people yelling at each other. But students, from gender-studies majors to future lawyers, have helped it become an outreach opportunity for issues such trans rights. The political process taught in the classroom, Muñoz said, happens in real time at the wall.16

“The students are ready to get involved in politics and lobby for local legislation that affects them,” he said. “It’s amazing to see young people passionate and ready to show up and make their voices heard.”17

USF senior Samantha May, an organizer for United Students Against Sweatshops, had seen the Wall of Love on social media. One Friday night she and friends found themselves nearby and decided to join in. At first, she couldn’t even see the street preachers.18

“I saw two dudes with giant angel wings and heard people chanting,” 22-year-old May said, referring to the costumes some of the protesters don. “After what happened in Pulse, I’ve talked to people who are terrified of doing stuff like that. I feel like this is a nice step,” she added. “People who there are there to protect you.”19

May said student activists hold a unique place in this fight, and they can make more of an impact than they might think. “Universities are a major part of the economy, and they have power,” she said. “We have power as students, because we pay tuition and attend these institutions.”20

In Ybor City, the ideological battle—for souls, the street—goes on each Friday until nearly 1 ᴀᴍ. Then, as uniformly as they arrive, the preachers pack up their bullhorns and leave. They will, no doubt, be back next week. But so will the Wall of Love.21

“There’s a lot of work to be done to make sure that LGBTQ people are protected,” said May. “Students have voices that we should use.”22