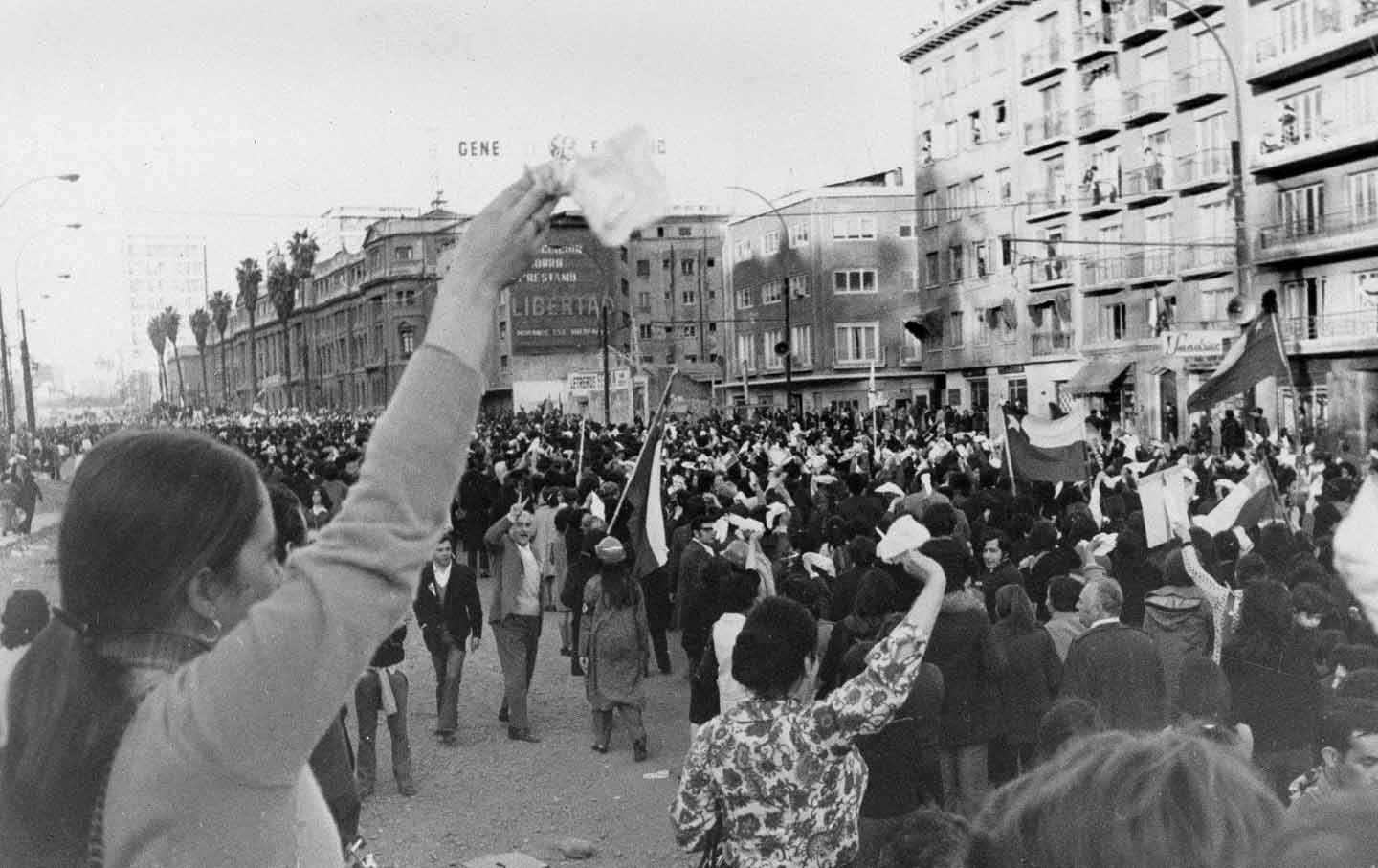 Orlando Letelier’s essay on the Chicago Boys and their role in the brutal neoliberal transformation of Chile has withstood the test of time. A few weeks before his assassination, Letelier was able to capture in detail the misery to which the Chilean disciples of Milton Friedman had visited on his country and accurately spelled out what they still had in store for it. The irony, he noted, is that Friedman and the Chicago Boys might have been driven by free-market doctrine, but the end result of their policies was to further the monopolization of the economy by the Chilean capitalist class.

Another ironic fact that Letelier pointed to was that among the victims of these doctrinaire policies was the Chilean middle class, which had been played a key role in the overthrow of Salvador Allende.

The roles of the Central Intelligence Agency, the Chilean elites, the Chicago Boys, and the Chilean military in the coup that overthrew Allende and the neoliberal transformation of Chile under Pinochet have been well-documented and widely studied. There have, however, been few studies of the role of the middle class, which served as the mass base of the counterrevolution. Yet this angry middle-class mob was one of the central features of the Chilean political scene leading up to the coup.

When I arrived in Chile in 1972, people on the left were constantly being mobilized for marches and rallies in the center of Santiago, and increasingly, the reason for this was to counter the demonstrations mounted by the right. My friends brought me to these demonstrations, where there were an increasing number of skirmishes with right-wing counter-demonstrators.

I noticed a certain defensiveness among participants in these events, and a reluctance to be caught out alone in leaving them, for fear of being harassed, or worse, by right-wing groups. The revolution, it dawned on me, was on the defensive, and the right was beginning to take command of the streets. Twice I was nearly beaten up because I made the mistake of observing right-wing demonstrations with El Siglo, the Communist Party newspaper, tucked prominently under my arm. Stopped by Christian Democratic youth activists, I said that I was a Princeton University graduate student doing research on Chilean politics, which I was. They sneered at me and told me that I was one of Allende’s “thugs” imported from Cuba. On one occasion, the miraculous arrival of a Mexican friend saved me from a beating. On the other occasion, my fleet feet did the job.

The coup in Chile showed that the middle class is not necessarily a force for democratization in developing countries.

I looked into the faces of the predominantly white right-wing crowds, many of them blond-haired, and imagined the same enraged faces at the fascist and Nazi demonstrations that took control of the streets in Italy and Germany. These were people who looked with disdain at what they called the rotos, or “broken ones,” that filled the left-wing demonstrations, people who were darker, many of them clearly of indigenous extraction.

Over the next few months, I interviewed both people on the right and people on the left on the rise of the counterrevolution. Some respondents on the right saw Allende and the Unidad Popular (UP) as a “minority government” out to impose themselves on the majority through “questionable” constitutional measures. Others saw the “constitutional road to socialism” as simply a cover for a plot to impose a “Stalinist dictatorship.” Still others saw the appeal to the middle class as “pure demagoguery” meant to lull the middle class into complacency as the left set about to “destroy democracy.” Most of the right-wingers I interviewed were Christian Democrats, who saw former Christian Democrats who had joined the UP and even such true-blue Christian Democrats as Radomiro Tomic, Allende’s rival in the 1970 elections, as “people who had been fooled by the Communists.” Practically all had become entrenched in their position of great suspicion, disdain, or hostility to the left.

I remember going to Valdivia, with an American friend, to look up a Christian Democratic farmer that had been recommended by a fellow graduate student at the Princeton sociology department. After a couple of weeks of intensive interviewing and documentary research in Santiago, I thought I would relax a bit and enjoy the famed Chilean hospitality.  We were warmly received by the farmer and his family, which included a son and two teenage daughters. A goat was slaughtered for us and we sat down to a hearty dinner on our first night. Then our host started cursing Allende, calling him simply a tool for the Communist Party to “impose its dictatorship on Chile.” The Socialist Party of Allende was no better than the Communists, and the Izquierda Cristiana, composed of former Christian Democrats that had joined the Unidad Popular, were “traitors.” My friend and I kept our politics to ourselves and tried to guide the discussion to more innocuous topics. I wanted to interview him on his views, I said, but we could do that after dinner. He said fine, but after a few minutes, he again began on his anti-leftist tirade.

The next day at breakfast, lunch, and dinner was more of the same hospitality punctuated by lengthy invectives against “communists who will take away my property and give them to the rotos.” Finally, at dinner on our second day, I could no longer tolerate his litany of “crimes of the left” and said I actually thought Allende was fighting for social justice and the land reform he was trying to push would actually benefit medium farmers like him and would negatively impact only the big landholders.

Chileans, I had been told, could be really friendly and hospitable until they smelled your politics, after which you either became a really close friend or you became an outcast. My friend and I became outcasts, and our not being asked to breakfast the next day was a clear sign that we had overstayed our welcome.

This experience brought home to me how ghettoized Chile’s classes were, how class formed such gulfs between the elite, the middle class, and workers. Chile’s roughly equal electoral division between the National Party, the Christian Democratic Party, and the Unidad Popular reflected class solidarities that were difficult to bridge. My experience in Valdivia confirmed my worst fear, that is, that the Unidad Popular had lost the middle classes and that this did not stem so much from what its policies actually were than from deep-seated fears that the gains of workers and the lower classes would only come at their expense.

Interviews with people on the left brought up a uniform response: that the middle class was being misled and manipulated by the right wing to believe that their class interests were with the rich rather than with the working class. Most believed in the Unidad Popular’s formula for revolution, that a broad alliance between working class, middle class, and constitutionally oriented sectors of the upper class would be the social engine of revolutionary transformation. There was a discounting of the independent dynamic of the middle sectors, a view of them as a passive mass that would respond to their “real” class interests, which lay in an alliance with the working class. Later, in the United States, after the September 11 coup against Allende, I would encounter this same perspective, which assigned most of the blame for the coup against Allende to external forces, rather than to the dynamics of class conflict and counterrevolution.

The danger of an inflamed middle class that saw its status and interests threatened from below, pushing it to a counterrevolutionary position that was abetted but not manipulated by the elite, was confirmed as I read up on the events leading up to Mussolini’s taking of power in Italy and Hitler’s ascent to power during the Weimer Republic in Germany.

I left Chile around March of 1973, after having witnessed two milestones in middle-class radicalization toward the right, the strike of small-truck owners and the marches of middle-class women banging pots and pans. The right by then controlled the streets, mounting demonstration after demonstration and subjecting people identified with the Unidad Popular to harassment and beatings. The left still mounted demonstrations, and the streets still resounded with the happy chant, “El que no salta es momio” (“He who does not jump is a reactionary”), but the mood of defensiveness had deepened.

After the coup of September 11, progressive analysis of the event and actions leading up to it focused on the role of the United States, which was seen as directing or working intimately with Pinochet and the leadership of the National and Christian Democratic parties. That a counterrevolutionary mass base had been central in the overthrow tended to be omitted, or if it wasn’t, the tendency was to regard it as largely a force manipulated by the CIA and the elites.

The reality, however, was that, contrary to the prevailing explanations of the coup, which attributed Pinochet’s success to US intervention and the CIA, the counterrevolution was already there prior to the US destabilization efforts; that it was largely determined by internal class dynamics; and that the Chilean elites were able to connect with middle-class sectors terrified by the prospect of poor sectors rising up with their agenda of justice and equality.

In short, the US intervention was successful because it was inserted into an ongoing counterrevolutionary process. CIA destabilization was just one of the factors that contributed to the victory of the right, not the decisive one. This was not something that progressives wanted to hear then, since many wanted a simple black-and-white picture, that is, that the overthrow of Allende was orchestrated from the outside, by the United States. Being of the left, I could understand why politics demanded such a portrayal of events. Being a sociologist, I realized that the situation was much more nuanced.

It was a phenomenon that I was again to encounter 40 years later, when I had a front row seat to middle-class mobilizations against the elected government of Yingluck Shinawatra in Thailand. Yingluck was a stand-in for her brother Thaksin, who had revolutionized Thai politics by mobilizing the rural poor. Supported by the middle class and dominant section of the Thai elite, the military seized power in Thailand in 2014 and has maintained an iron grip on power since then, in spite of the pleas of middle-class political formations that had supported the coup, like the Democratic Party, for a return to civilian rule.

Seymour Martin Lipset famously posited the thesis that the middle class was a force for democratization in the developing world. After observing counterrevolutionary movements against the lower classes in Chile and Thailand, I see instead a Janus-faced class: a force for democracy when it is fighting elites defending their power and privileges, a force for reaction when confronted with lower classes seeking a revolutionary transformation of society.

Yet, as Orlando Letelier pointed out, the tragedy of the middle class is that, after serving as a mass base for reaction, it also becomes eventually one of the victims of the counterrevolution.