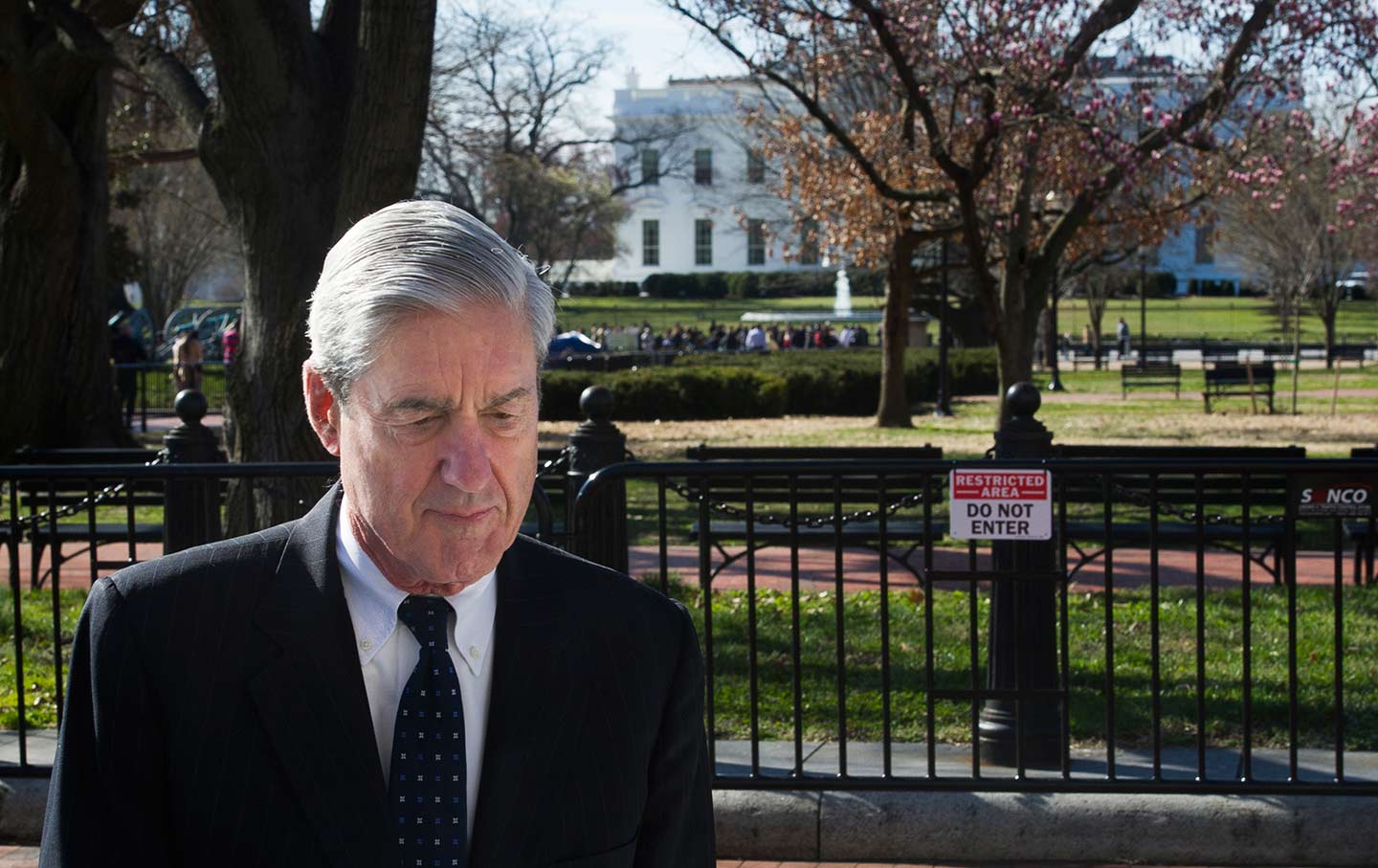 The John Batchelor Show, May 29

It cannot be emphasized too often: Russiagate—allegations that the American president has been compromised by the Kremlin, which may even have helped to put him in the White House—is the worst and (considering the lack of actual evidence) most fraudulent political scandal in American history. We have yet to calculate the damage Russiagate has inflicted on America’s democratic institutions, including the presidency and the electoral process, and on domestic and foreign perceptions of American democracy, or on US-Russian relations at a critical moment when both sides, having “modernized” their nuclear weapons, are embarking on a new, more dangerous, and largely unreported arms race.

Rational (if politically innocent) observers may have thought that when the Mueller report found no “collusion” or other conspiracy between Trump and Vladimir Putin’s Kremlin, only possible “obstruction” by Trump—nothing Mueller said in his May 29 press statement altered that conclusion—Russiagate would fade away. If so, they were badly mistaken. Evidently infuriated that Mueller did not liberate the White House from Trump, Russiagate promoters—liberal Democrats and progressives foremost among them—have only redoubled their unverified collusion allegations, even in once-respectable media outlets. Whether out of political ambition or impassioned faith, the damage wrought by these Russiagaters continues to mount, with no end in sight.

One way to end Russiagate might be to discover how it actually began. Considering what we have learned, or been told, since the allegations became public nearly three years ago, in mid-2016, there seem to be at least three hypothetical possibilities:

1. One is the orthodox Russiagate explanation: Early on, sharp-eyed top officials of President Obama’s intelligence agencies, particularly the CIA and FBI, detected truly suspicious “contacts” between Trump’s presidential campaign and Russians “linked to the Kremlin” (whatever that may mean, considering that the presidential administration employs hundreds of people), and this discovery legitimately led to the full-scale “counterintelligence investigation” initiated in July 2016. Indeed, Mueller documented various foreigners who contacted, or who sought to contact, the Trump campaign. The problem here is that Mueller does not tell us, and we do not know, if the number of them was unusual.

Many foreigners seek “contacts” with US presidential campaigns and have done so for decades. In this case, we do not know, for the sake of comparison, how many such foreigners had or sought contacts with the rival Clinton campaign, directly or through the Clinton Foundation, in 2016. (Certainly, there were quite a few contacts with anti-Trump Ukrainians, for example.) If the number was roughly comparable, why didn’t US intelligence initiate a counterintelligence investigation of the Clinton campaign?

If readers think the answer is because the foreigners around the Trump campaign included Russians, consider this: In 1986, when Senator Gary Hart was the leading candidate for the Democratic presidential nomination, he went to Russia—still Communist Soviet Russia—to make contacts in preparation for his anticipated presidency, including meeting with Soviet leader Mikhail Gorbachev. US media coverage of Hart’s visit was generally favorable. (I accompanied Senator Hart and do not recall much, if any, adverse US media reaction.)

2. The second explanation—currently, and oddly, favored by non-comprehending pro-Trump commentators at Fox News and elsewhere—is that “Putin’s Kremlin” pumped anti-Trump “disinformation” into the American media, primarily through what became known as the Steele Dossier. As I pointed out nearly a year and a half ago, this makes no sense factually or logically. Nothing in the dossier suggests that any of its contents necessarily came from high-level Kremlin sources, as Steele claimed. Moreover, if Kremlin leader Putin so favored Trump, as a Russiagate premise insists, is it really plausible that underlings in the Kremlin would have risked Putin’s ire by furnishing Steele with anti-Trump “information”? On the other hand, there is plenty of evidence that “researchers” in the United States (some, like Christopher Steele, paid by the Clinton campaign) were supplying him with the fruits of their research.

3. The third possible explanation—one I have termed “Intelgate,” and that I explore in my recent book War With Russia?: From Putin & Ukraine to Trump & Russiagate—is that US intelligence agencies undertook an operation to damage, if not destroy, first the candidacy and then the presidency of Donald Trump. More evidence of “Intelgate” has since appeared. For example, the intelligence community has said it began its investigation in April 2016 because of a few innocuous remarks by a young, lowly Trump foreign-policy adviser, George Papadopoulos. The relatively obscure Papadopoulos suddenly found himself befriended by apparently influential people he had not previously known, among them Stefan Halper, Joseph Mifsud, Alexander Downer, and a woman calling herself Azra Turk. What we now know—and what Papadopoulos did not know at the time—is that all of them had ties to US and/or UK and Western European intelligence agencies.

US Attorney General William Barr now proposes to investigate the origins of Russiagate. He has appointed yet another special prosecutor, John Durham, to do so, but the power to decide the range and focus of the investigation will remain with Barr. The important news is Barr’s expressed intention to investigate the role of other US intelligence agencies, not just the FBI, which obviously means the CIA when it was headed by John Brennan and Brennan’s partner at the time, James Clapper, then director of national intelligence. As I argued in The Nation, Brennan, not Obama’s hapless FBI Director James Comey, was the godfather of Russiagate, a thesis for which more evidence has since appeared. We should hope that Barr intends to exclude nothing, including the two foundational texts of the deceitful Russiagate narrative: the Steele Dossier and, directly related, the contrived but equally ramifying Intelligence Community Assessment of January 2017. (Not coincidentally, they were made public at virtually the same time, inflating Russiagate into an obsessive national scandal.)

Thus far, Barr has been cautious in his public statements. He has acknowledged there was “spying,” or surveillance, on the Trump campaign, which can be legal, but he surely knows that in the case of Papadopoulos (and possibly of General Michael Flynn), what happened was more akin to entrapment, which is never legal. Barr no doubt also recalls, and will likely keep in mind, the astonishing warning Senator Charles Schumer issued to President-elect Trump in January 2017: “Let me tell you, you take on the intelligence community, they have six ways from Sunday at getting back at you.” (Indeed, Barr might ask Schumer what he meant and why he felt the need to be the menacing messenger of intel agencies, wittingly or not.)

But Barr’s thorniest problem may be understanding the woeful role of mainstream media in Russiagate. As Lee Smith, who contributed important investigative reporting, has written: “The press is part of the operation, the indispensable part. None of it would have been possible…had the media not linked arms with spies, cops, and lawyers to relay a story first spun by Clinton operatives.” How does Barr explore this “indispensable” complicity of the media in originating and perpetuating the Russiagate fraud without impermissibly infringing on the freedom of the press?

Ideally, mainstream media—print and broadcast—would now themselves report on how and why they permitted intelligence officials, through leaks and anonymous sources, and as “opinion” commentators, to use their pages and programming to promote Russiagate for so long, and why they so excluded well-informed, nonpartisan alternative opinions. Instead, they have almost unanimously reported and broadcast negatively, even antagonistically, about Barr’s investigation, and indeed about Barr personally. (The Washington Post even found a way to print this: “William Barr looks like a toad…”) Such is the seeming panic of the Russiagate media over Barr’s investigation, which promises to declassify related documents, that The New York Times again trotted out its easily debunked fiction that public disclosures will endanger a purported US informant, a Kremlin mole, at Putin’s side.

Finally, but most crucially, what was the real reason US intelligence agencies launched a discrediting operation against Trump? Was it because, as seems likely, they intensely disliked his campaign talk of “cooperation with Russia,” which seemed to mean the prospect of a new US-Russian détente? Even fervent political and media opponents of Trump should want to know who is making foreign policy in Washington. The next intel target might be their preferred candidate or president, or a foreign policy they favor.

Nor, it seems clear, did the CIA stop. In March 2018, the current director, Gina Haspel, then deputy director, flatly lied to President Trump about an incident in the UK in order to persuade him to escalate measures against Moscow, which he then reluctantly did. Several non–mainstream media outlets have reported the true story. Typically, The New York Times, on April 17 of this year, reported it without correcting Haspel’s falsehood.

We are left, then, with this paradox, formulated in a tweet on May 24 by the British journalist John O’Sullivan: “Spygate is the first American scandal in which the government wants the facts published transparently but the media want to cover them up.”