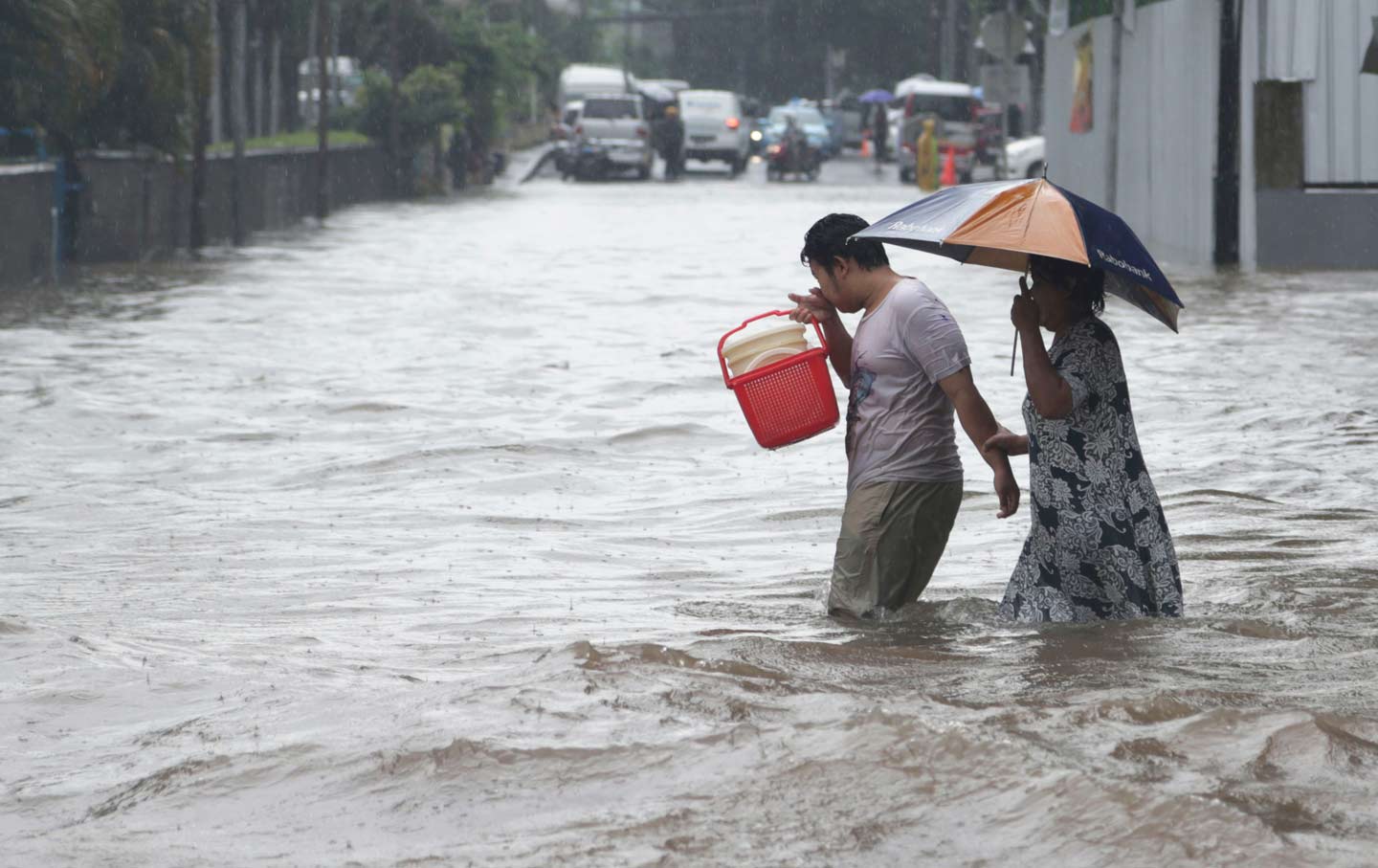 The term “green economy” danced around the corridors at the Paris climate talks, evoking visions of electric cars and “clean tech.” But “decarbonization” is a messier story in the Global South. Workers in the rapidly warming “developing world” need more than wind turbines and highbrow organic farms; they need to build livelihoods that can mitigate ecological crisis—and leap ahead of the dominant fossil-fuel based economies, which historically have both controlled and stifled their development.

A report by the New Delhi–based Just Jobs Network (JJN) explores the risks and possibilities that climate change presents for labor in India, Indonesia and Bangladesh, where global warming can be a creative as well as destructive force.

One primary impact of climate change will be rising volatility in agricultural production, which will disrupt traditional farming, fishing and pastoral communities. Ecological disruption will in turn upend related industries down the production chain, undermining logistics and retail markets.

Then comes the human fallout: By choice or out of desperation, many displaced rural people will turn to wage work or start ad-hoc businesses. Often, people’s struggles to cope with environmental risk breeds new threats. In Bangladesh, for example, where climate change and sea level rise will intensify existing vulnerabilities to flood or drought, some farmers have tried to adapt by turning to small-scale aquaculture operations. But rather than gaining alternative income in the burgeoning seafood-farming trade, in many cases farmers have sunken into debt, gotten bilked by predatory landlords, or lost their enterprises to lethal infection.

JJN researchers found that in Indonesia, sea level rise will drive displacement of more than 80,000 farmers. Meanwhile, export-driven, unsustainable palm-oil farming is ravaging precious forest tracts, leading to public-health catastrophes like this summer’s ferocious wildfires in Kalimantan and Sumatra. Facing the incursion of the seas and toxic smoke overhead, people may try to flee flood and fire by moving again into harm’s way. “Climate change will speed up migration to urban areas,” according to JJN, “but most of its cities are vulnerable to coastal flooding.”

But migration, for better or worse, serves as a sociological barometer for the climate crisis. A basic coping mechanism in response to declining crop yields, for instance, might be more Indian farmers streaming into cities to pursue low-wage, dangerous construction jobs. Some may migrate to the Middle East as low-wage guestworkers, where they are even more vulnerable to abuse. Wherever they go, JJN reports, “migrant workers enjoy little to no legal protections when they migrate, making them particularly susceptible to exploitation.”

But the main patterns of climate-induced migration will be temporary and intraregional—such as a temporary displacement from drought. Or, as extreme weather patterns become the “new normal,” people resort to circular migration—cyclical movement that helps people cope with harsh conditions at home, such as Mexican farmers going north for seasonal harvesting jobs.

Urbanization driven by climate migration has the potential to drive down wages and working conditions in urban labor markets. This can be ripe ground for conflict between migrants and people in host communities. It can also be ripe ground for instability and unrest.

Stabilizing migrant populations requires incorporating newcomers into the local workforce. But according to JJN Executive Director Sabina Dewan, devising work authorization schemes may prove “the most difficult task, as the native citizens tend to oppose it.”

Safeguarding migrants’ rights is a global challenge, absent any clear legal infrastructure for dealing with “climate refugees.” Even if there were an internationally recognized legal regime on the evolving phenomenon of climate-related displacement, Dewan adds via e-mail, “a definition still will not enable one to distinguish between those migrating for political, economic or climate reasons.… It is hard to support or protect climate refugees alone.”

Migration is an inevitable process that will be shaped by climate change through surrounding political, economic, and social dynamics. States and international authorities have a responsibility to help communities absorb the tensions stemming from migration, from xenophobic attacks on refugees to managing water and land rights. The demographic shifts induced by climate change pose an essential collective challenge for labor unions, governments, and humanitarian groups.

Some Global South communities are experimenting with small-scale infrastructure innovations that provide cleaner production and consumption—such as off-grid renewable energy generation or locally controlled water stewardship programs. When local communities can manage their resources responsibly, economic efficiency and resource conservation tend to follow, which can spur other virtuous cycles—for example, improvements in water infrastructure are “likely to benefit women in particular, as they are the ones who are usually responsible for tasks like fetching water.”

To help develop the complex infrastructures needed to cope with sea level rise, such as desalinization systems, JJN says extremely poor countries like Bangladesh need ample access to international finance mechanisms, particularly the Green Climate Fund that emerged from earlier COP negotiations (and now faces political challenges). But poor communities’ ability to leverage global capital depends on whether grassroots public pressure can break the stranglehold of wealthier nations and polluting corporations on the public discourse about compensating the Global South for climate-related “loss and damage.”

Greening the economy for the most impacted communities isn’t merely a development goal; it is a human-rights challenge. Beyond the allure of solar startups and farmer’s markets, our concept of an ecologically balanced livelihood should also reach drowning farmlands and sweltering sweatshops at the periphery of the global economy. These workers were cheated out of the promise of development under carbon-fueled capitalism. They ought to be at the helm of a just transition to a decarbonized world.