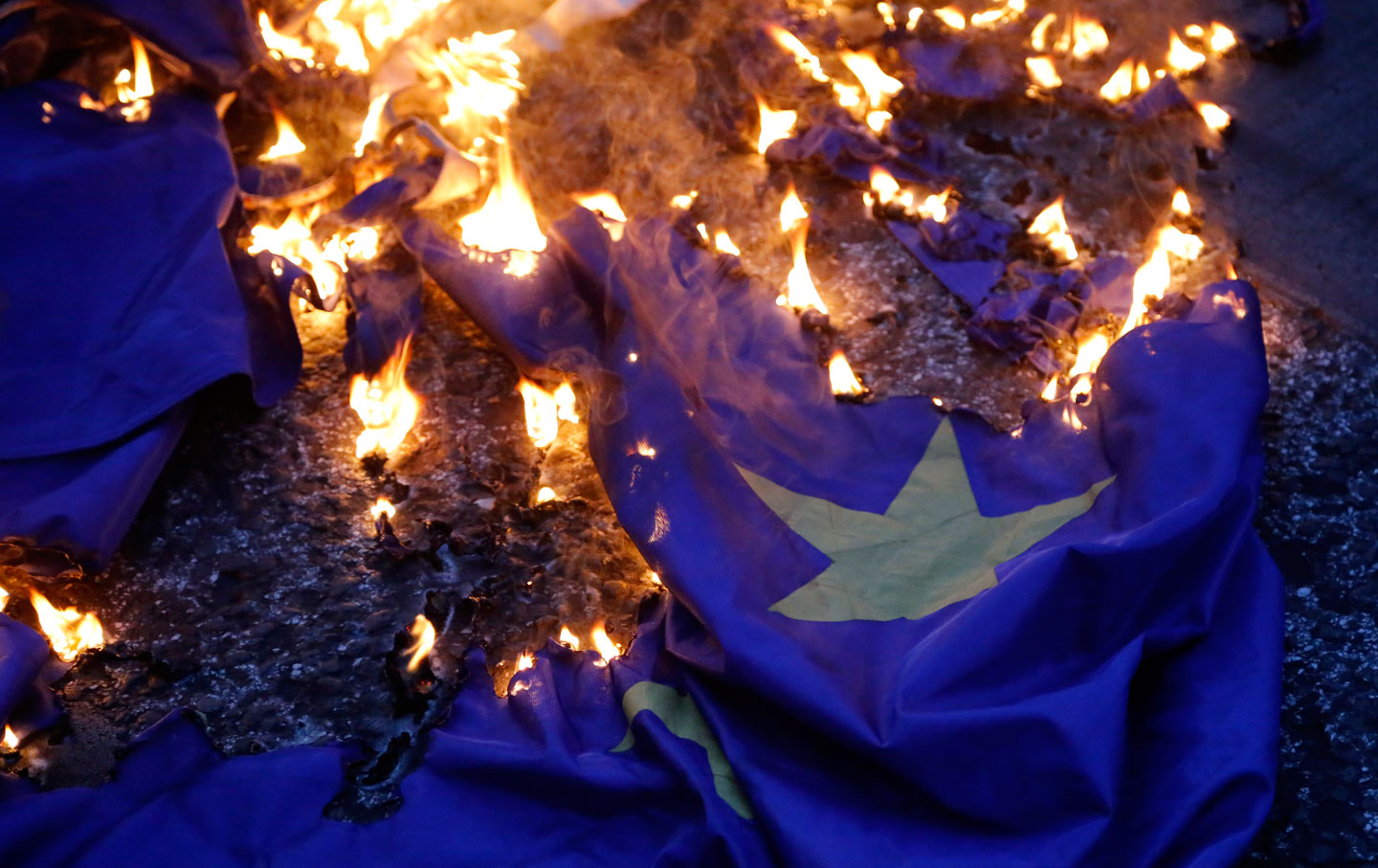 Greek banks have reopened this week, but Greece’s economy remains trapped in a tragic financial standoff—ironically, an economic war orchestrated by the monetary system originally designed to promote peaceful cooperation. So as the protests, financial panic, and political brinksmanship run their course, can anyone envision Greece actually rebuilding from this mess? Whether it leaves or stays under the yoke of the German-led technocracy, Athens will need to find an alternative path to recovery.

With Syriza’s current government in turmoil, there’s no clear Plan B. But one report by the progressive think tank Just Jobs Network (JJN), based in Washington and New Delhi, laid out some practical hypotheticals on what might happen in the event of stage-left Grexit or continued eurozone membership.

First, JJN researcher Abhijnan Rej acknowledges that the Greek crisis reflects problems extending far beyond Athens, revealing “the urgent need for a de-coupling between the real sector [i.e., concrete consumed goods and services]—responsible for growth-enhancing investments in employment, infrastructure and social protection, among other things—and the financial sector, which is fueled by large-scale speculation.” For Greece to treat the immediate symptoms of this long-term continental malady, Rej walks through several options:

Grexit is the most controversial but arguably more realistic path, according to this analysis. And from a left standpoint, the shock of default would be preferable to indefinite debt enslavement, simply as a means of reasserting economic sovereignty and autonomy.

In practical terms, Grexit would require Athens to issue short-term substitute currency in the form of IOUs—scrip or vouchers backed by the Bank of Greece. The country would shift toward reintroducing a national currency with “an exchange rate policy that leverages its low value relative to the euro” (initially a fixed rate, then floated). Amidst a looming trade international imbalance (with heavy dependence on imports), reviving Greece’s old currency—at a rate of about 341 drachma to one euro—could make exports extremely cheap, but also introduce volatility and possible hyperinflation.

Post-euro life would introduce painful isolation, at least in the short term, but sticking with the financial devil they know would likely be even more miserable. According to JJN, Greece could go the “Cyprus” route, staying nominally eurofied under draconian capital controls (like those Greece already imposed in late June), possibly coupled with haircuts on private deposits to shore up failing banks. This could not ensure any long-term recovery, though, particularly not if the troika continues its current program of regressive tax hikes, privatizations, and budget slashing—an agenda that finance officials have sadistically intensified since the No referendum, with reluctant agreement from Syriza’s leaders.

Another tactic would be to renegotiate eurozone membership, in hopes of securing less painful terms. This could involve “a debt write-off in which creditors literally forgive all or part of Greek sovereign debt,” or an extension of the maturity period (likely deferring the festering financial pain). Or debt could be restructured by “shifting the use of bailout funds from servicing existing debt to investments in the real economy,” which would allow for some recovery instead of just sinking deeper into toxic debt.

Grexit scenario B would involve drawing closer to non-eurozone allies Russia and China, primarily through currency swaps to facilitate trade. Though Greece already maintains active trade ties with Russia, this could still leave Athens in some awkward geopolitical entanglements, with unpredictable ramifications.

The most direct way to break out of the austerity trap is some kind of Grexit, but at considerable social cost. According to Rej, “With a cheap currency, a huge import bill and basically no growth in the near future, Greece will be forced to make spending cuts. They could try to raise revenue by severely taxing gains from stocks. But there wouldn’t be many Greeks left with enough money to play the markets and be leveraged for revenue; the oligarchs have long decamped.”

But to achieve any semblance of recovery, Greece first needs control over its monetary supply, generating enough liquidity to stanch the bleeding (e.g., making sure pensioners don’t go homeless and hospitals don’t run out of medicine). In the long term, there’s room for Greece to transform itself from a failed neoliberal experiment into a laboratory for progressive anti-austerity imagination.

JJN does not prescribe an exact redevelopment formula for Greece, but highlights job-creation potential in stimulating investment in small and medium domestic enterprises, where the workforce is currently concentrated. Policies to promote expansion in high-end tech manufacturing, he posits, coupled with massive job-training programs could help Greece cope with economic isolation and help “correct the trade imbalance through stronger support for domestic products that substitute for imports, whenever possible.”

Okay, all that’s light years away from where Greece is today, as a state that is utterly impoverished, with a desperate, embittered populace, clutching its pride with bloody knuckles after a decisive No vote. But ultimately, the eurozone itself may pay the highest price, because of the fundamental brokenness of a financial regime that flourishes by cannibalizing democracy.

Brown University professor of political economy Mark Blyth says Greece’s troubles are just the sharp end of a crisis rotting the core of the eurozone project. As he argues in a recent commentary, “Only a complete debt moratorium and an end to austerity would allow the Greek economy to produce sufficient investment to impact GDP growth such that the economy grows faster than the debt stock, and that’s never going to happen.” The crux of the troika’s economic suicide pact isn’t cooperative finance, but brutal politics, Blyth tells The Nation: “If they were serious about this being a political union, they would help Greece, instead of which they’re throwing it on the fire.” With no one willing to admit that the debts piling onto public balance sheets are fundamentally unsustainable, “it’s just a question of who’s going to basically pull the trigger first.”

If they exit now from this financial “theater of the absurd,” maybe the Greeks will get the last laugh—cutting the troika loose, keeping their dignity intact, and watching the rest of the continent sink under the tragic weight of its delusions of grandeur.