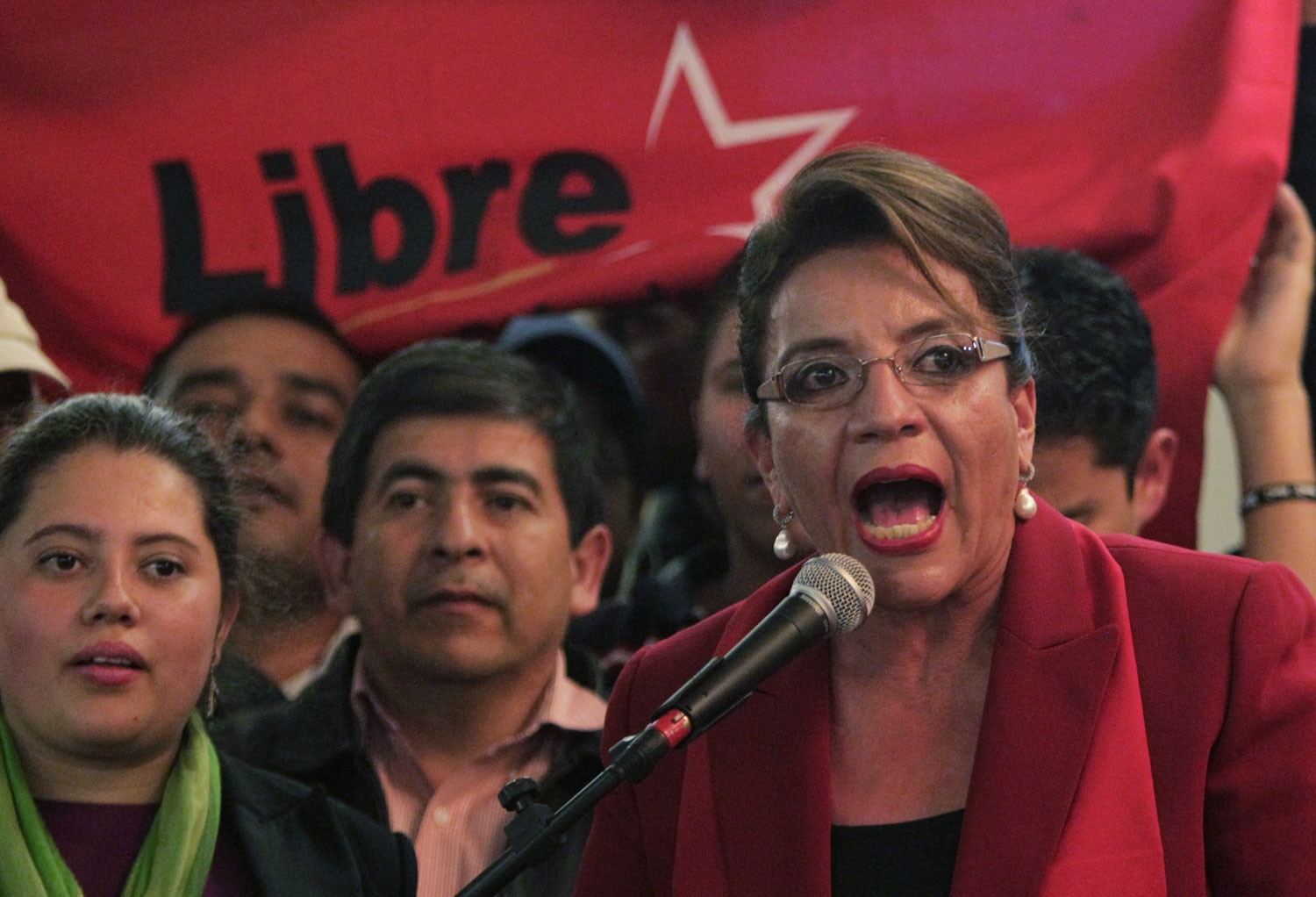 On November 25, the afternoon after Election Day in Honduras, several hundred red-flag-waving protesters marched through the streets of Tegucigalpa in support of Xiomara Castro, the woman they claimed is the rightful president of the country. The next day, hundreds of students took up the cause, staving off police and teargas. And the following morning, even more students poured into the streets, adding their voices to the crescendo of outrage that has roiled the country amid allegations of vote-buying by the winning party, election fraud and ongoing murders of opposition supporters.

Honduras’s November 24 election was supposed to have been a signal moment, the first time since the United States–backed military coup that citizens had a meaningful opportunity to express their political will. But with the defeat of Castro, who ran as the candidate of the left-leaning LIBRE party, and the victory of the National Party’s Juan Orlando Hernández, there are real questions over whether the people’s will has been heard. Castro has called for a recount and vowed to challenge the results, but even so, the likely outcome for Honduras is four more years of hardline neoliberal leadership—from the presidential palace if not from congress.

Honduras was in crisis well before the coup, but the removal of the democratically elected president Manuel Zelaya in 2009 pushed the country into free fall. Violent deaths climbed to nearly twenty a day. The country’s second city, San Pedro Sula, surpassed Mexico’s Ciudad Juárez as the murder capital of the world in 2011. Inequality surged. And as social spending dropped, debt rose steadily. “From 2010-2012, the poverty rate increased by 13.2 percent while the extreme poverty rate increased by 26.3 percent,” reads a report by the Center for Economic and Policy Research. The report continues, “Honduras now has the most unequal distribution of income in Latin America.”

The election of Hernández as president means a continuation of the policies that have driven the country into such disaster. As the candidate of the ruling National Party, and the president of congress during the last four years, Hernández is very much a creature of the conservative establishment. During his tenure in congress, he oversaw the creation of a new military police force, which was turned out onto the streets just before the election; as a candidate, he continued to beat the drums for security, promising to put a “soldier on every corner” and to pair soldiers with police for urban patrols. Meanwhile, his colleagues in the ruling National Party have promised to further open the country to foreign investment. The Economist reported that prior to the inauguration at the end of January, the National Party may push through a new round of cuts in order to qualify for a new IMF loan.

And yet, if the election didn’t usher in the change for which many hoped, the story is nonetheless more complicated than presidential winners and losers. As much as Hernández intends to entrench the status quo, he will also be forced to contend with a changing country—one where he will face both a potent new political force, in the form of Castro’s party, LIBRE, as well as the urban and rural grassroots movements that have been pushing back throughout the country.

“If we sit back and carefully study the result of these elections, I have no doubt that it is a triumph for LIBRE,” said Hugo Noé Pino, who is the former president of the Central Bank and Ambassador to the United States and who now supports LIBRE. Official results posted by electoral authorities gave LIBRE 29 per cent of the vote, and with it, almost a third of the seats in congress. The National Party claimed 37 percent, the Liberals claimed 20 percent and almost 14 percent went to the new Anti-Corruption Party. “This has no precedent,” said Pino.

LIBRE, which stands for Libertad y Refundación, was born in 2011 when broad segments of the resistance movement joined with Liberal party members faithful to Zelaya. The ex-president, who had just returned from exile, became head of the party and his wife, Xiomara Castro, was selected as their candidate for president. LIBRE is a democratic socialist party, which promised voters a break with the past and a focus on education and health. In addition, the social-movement forces within the party proposed a “refoundational project,” which would include the writing of a new constitution.

Honduras has long been led by two major parties, the Liberal Party and the National Party, but LIBRE has fractured their rule, injecting the traditional political landscape with leftist politicians reminiscent of those who have come to power throughout Latin America over the past decade. “Most political systems in Latin America, up until the mid-1990s, were some sort of bipartisan or tri-partisan traditional political systems. The only one left is Honduras, and the 2009 coup sort of opened that up in a deep way,” said Dr. Dario Euraque, a Honduran historian and professor at Trinity College in Connecticut. “Even if Doña Xiomara does not win, the bipartisan system is dead, and that is a major achievement.”

But there is another element to the changing political landscape in Honduras, and that is the role of the country’s grassroots resistance movements, which will not give up their struggles for land, fair wages and justice even after the last votes have been tallied. The country’s public sector is in turmoil, and while doctors and teachers are currently working, fresh strikes cannot be ruled out in the new year.

Teachers constitute one of the largest sectors that mobilized against the coup and against the World Bank–backed education reform package. “The Fundamental Education Law has recently been passed, which amounts to the privatization of education and the removal of the rights of teachers,” said Carlos Amador, a teacher who represents 300 teachers in the municipality of El Porvenir, an agricultural area east of the capital. “One of the forms of reprisals against the teachers relates to our salaries. We are not being paid on time and months go by without pay.” The Honduran Teacher Federation says there are more than 14,000 teachers across the country who have not received their full salaries since 2010. Amador expects the teachers struggle to ramp up next year unless the new government scraps the recent education law.

Doctors have also gone without pay, and many hospitals can no longer provide syringes and other basic equipment for patients. Doctors and other medical staff struck on November 5, voting by a slim margin to return to work the following week.

But it is Indigenous and campesino peasant movements that are the most steadfast sectors of the resistance in Honduras, refusing to bow down even when faced with assassinations, threats and incarceration. The Chicago Religious Leadership Network on Latin America released a report documenting 229 politically related murders in Honduras since the outgoing president, Porfirio Lobo, took power after the coup. In addition, local campesino organizations calculate that more than 3,000 peasant farmers in Honduras are facing criminal charges linked to land struggles.

One of the most watched rural battles in the country is taking place in the lush, forested valleys of the country’s mid-west, where an Indigenous community’s fight against a dam promises to carry on regardless of election results. “The Lenca people have taken the decision to defend the Gualcarque River against the construction of a hydroelectric project called Agua Zarca,” Aureliano Molina from the Civic Council of Indigenous and Popular Organizations of Honduras (COPINH), told a delegation of US election observers before the vote.

Molina and two others face criminal charges for their efforts to support the community’s fight against the dam. One person was killed and another wounded when the army opened fire on the community’s blockade in July. Molina fears the worst is yet to come, saying, “there have been high-level meetings where it has been determined that after the elections they are going to remove us, dead or alive, from Río Blanco so that the electrical project can be built.”

Meanwhile, in the fertile Aguán region along the country’s north coast, peasant organizations have occupied twenty-six farms on 3,000 hectares of land. Since 2010, they count more than 113 assassinations of community members, some of which they attribute to private security working for palm oil magnate Miguel Facussé, as well as the Honduran Army. Some grassroots members of the Unified Campesino Movement of the Aguán (MUCA) ran for the LIBRE Party, but their key avenue of organization is in the physical occupation of unused farmland.

Throughout the settlements, houses made of palm stalks and thatched roofs stand side-by-side with concrete homes with sheet metal roofs. Many of the 2,500 families participating in the occupations are without running water or electricity. Yoni Rivas, a MUCA leader who ran unsuccessfully for a congress seat with LIBRE, said his organization is concerned that if the National Party forms the next government it will annul signed agreements recognizing the peasants’ rights to land. “That’s one of the fears that we have, and hopefully that won’t take place,” he said, speaking over the noisy air conditioner in his small office in the occupation of La Confianza.

The Aguán, like other conflict zones in Honduras, has been increasingly militarized since the 2009 coup. US Special Operations Command South are active in the Aguán and elsewhere, as is the US Joint Task Force-Bravo, which maintains a permanent presence at the Soto Cano base near Tegucigalpa. In August, construction on three new US naval bases along the north coast was announced. Eliminating drug trafficking has been used as the Pentagon’s justification for increased militarization, something critics say hides Washington’s true intentions.

When the new government is inaugurated in late January, thirty-nine LIBRE congress people will bring a new voice into the halls of a congress previously dominated by two large parties.

Outside the halls of power, among Honduras’s social movements, there is a feeling that the way forward lies in the continuation of their struggles to create a deep process of change and recreate the country through on the ground organizing. “Now more than ever we see the importance of the proposal of the refoundational convergence and of the organizations and spaces that have supported it,” said Berta Cáceres, General Coordinator of COPINH and one of the country’s most well-known activist leaders. “I think that is the path forwards, we know that it is a complicated context, but we will continue on from various locations and struggles.”