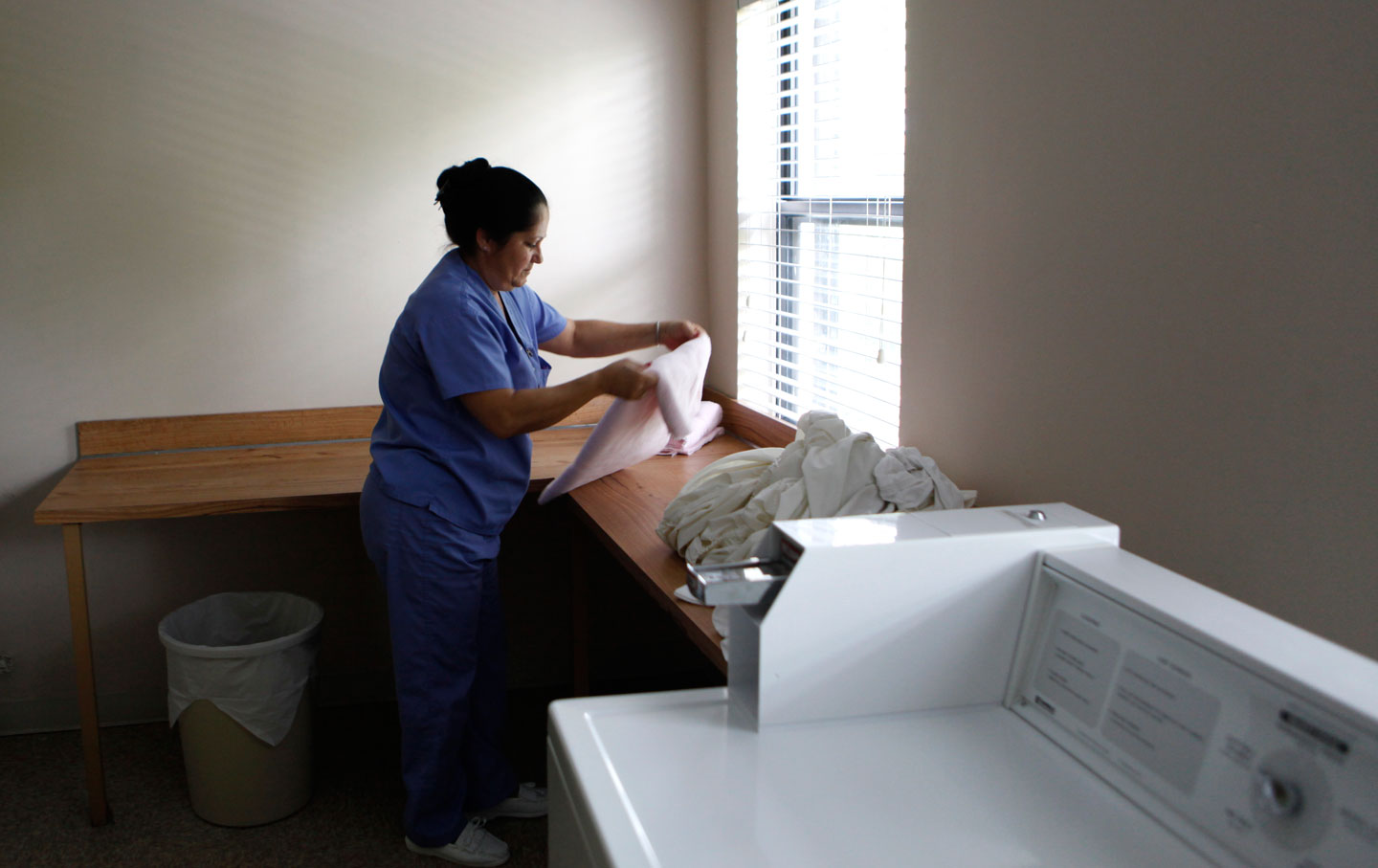 It took about 40 years after the passage of federal wage standards for the government to decide that domestic workers deserved a minimum wage. And it’s taking nearly another 40 years for home healthcare workers—the subset of the industry specializing in elder and disability care—to gain the same protections. The Obama administration has amended federal wage and hour regulations to close a longstanding exemption for these aides. And after a legal tussle with home healthcare employers, last week, an appeals-court judge struck down a lower-court ruling blocking the reforms, paving the way for extending minimum wage and overtime protections for some of the poorest workers caring for some of the most vulnerable people in our communities.

The new rules, first issued in 2013, target the workers employed by home healthcare agencies, who were excluded in the 1970s amendments to the Fair Labor Standards Act (FLSA) on the basis that their services were akin to “elder sitting” (read: not a “real” profession). In reality, the industry today has evolved into a major component of the healthcare infrastructure, tending to a range of physical and social needs including feeding, bathing, managing clients’ medication, and providing rehabilitation and recreational activity. Many of the responsibilities of the job require ongoing professional training, along with extreme hours (being on-call around the clock for intensive medical needs), and considerable manual labor (lifting fragile clients).

At a media conference announcing the decision, Santa Fe homecare worker Meriam Jawhar said the pending labor reforms were less about pay scales than they were about recognizing her vocation as dignified work: “I want people to know that the homecare is an occupation that deserves honor and validity.… When you’re caring for another human being, you’re making that person feel like a whole person despite whatever they’re going through. So it’s very important that we have a workforce to draw from, and making sure that people are trained and ready to go.”

The latest ruling (which may still face further court challenges) struck down a two-part district-court decision that held the Labor Department lacked the authority to unilaterally change the rules redefining the employers and job duties covered by the exemption. Judge Sri Srinivasan acknowledged that the Labor Department had only recently come to acknowledge the shifts that the home care industry had undergone—from a casualized workforce to one of the fastest growing healthcare sectors serving as a community-based alternative to institutionalization. The reforms, the court held, would “give those employees the same FLSA protections afforded to their counterparts who provide largely the same services in an institutional setting.”

The decision also acknowledges that the employer-employee relationship has changed, since the agencies that employ much of this workforce run sophisticated operations that have become a key beneficiary of private and public healthcare spending. Though trade associations had sued the Labor Department claiming the administration had overstepped its authority, in an earlier legal challenge to the companionship exemption in 2002, the Supreme Court left it to the Labor Department to upgrade those rules as needed. The court further acknowledged “an increased emphasis on the value of providing care in the home and a corresponding shift away from institutional care” in recent years.

Homecare work is grueling and stressful, and the industry’s yearly turnover rate is an estimated fifty percent.

As Ai-jen Poo, head of National Domestic Workers Alliance and a parallel consumer-labor campaign for homecare, Caring Across Generations, has explained, the growing “gray wave” of Baby Boomers are increasingly seeking community-based care instead of nursing homes. Meanwhile, the mothers, daughters and sisters who might have taken on caregiving duties a generation ago are often now working as breadwinners outside the home. The senior-care industry has grown to fill this need, but the wages have stayed flat at around $9.40 per hour, leaving home aides doing God’s work for a pittance, under extremely stressful and often exploitative conditions. The yearly turnover rate is an estimated 50 percent. And a large portion of homecare workers depend on public benefits—including the Medicaid funds that also subsidize their paltry wages.

The fact that this sector, like other domestic workers, is dominated by women, immigrants, and people of color, reveals much about how gender and racial divides further marginalize low-wage workers. At the same time, although federal regulations have fallen woefully short, tens of thousands of state-employed senior- and disability-care workers in California, Illinois, Minnesota, and Massachusetts have leaped ahead with successful unionization drives, resulting in significantly higher wages and job security. Although homecare unions have also faced legal challenges—most notably the Supreme Court’s regressive ruling on union fee collection in Harris v. Quinn—both the minimum-wage and union struggles show how centralization and standardization of the workforce has fostered labor solidarity.

But the wage hike only goes so far. In fact, advocates point out that many states already cover these workers under state minimum wage and overtime laws, which often exceed the federal wage floor. Homecare workers are primarily encumbered by a lack of adequate provisions on the consumer side for comprehensive, high-quality services that both pay living wages and offer affordable services to families at all income levels.

Sarita Gupta, co-director of Caring Across Generations, comments on the need for stable financing for senior and disability care. This issue of funding sustainability was left largely unaddressed in the Affordable Care Act, and in coming years the healthcare infrastructure will be severely stressed by the soaring cost of care and mushrooming patient population. “There is going to be a role that government will need to play in [making a real investment to create] a long-term care system in America that works for everyone.… that’s why today’s ruling is so important, because it gets us on the right step certainly in terms of the needs of strengthening a workforce that will be so critical to the long-term care system that we will need in the future.”

A minimum wage isn’t a long-term solution for the long-term care crisis—workers need salaries commensurate with comparable skilled medical professions, along with union representation and oversight of the industry. But with these new regulations arriving about 80 years late, at least regulators are realizing that the people caring for the aging deserve recognition as more than just “companions.”