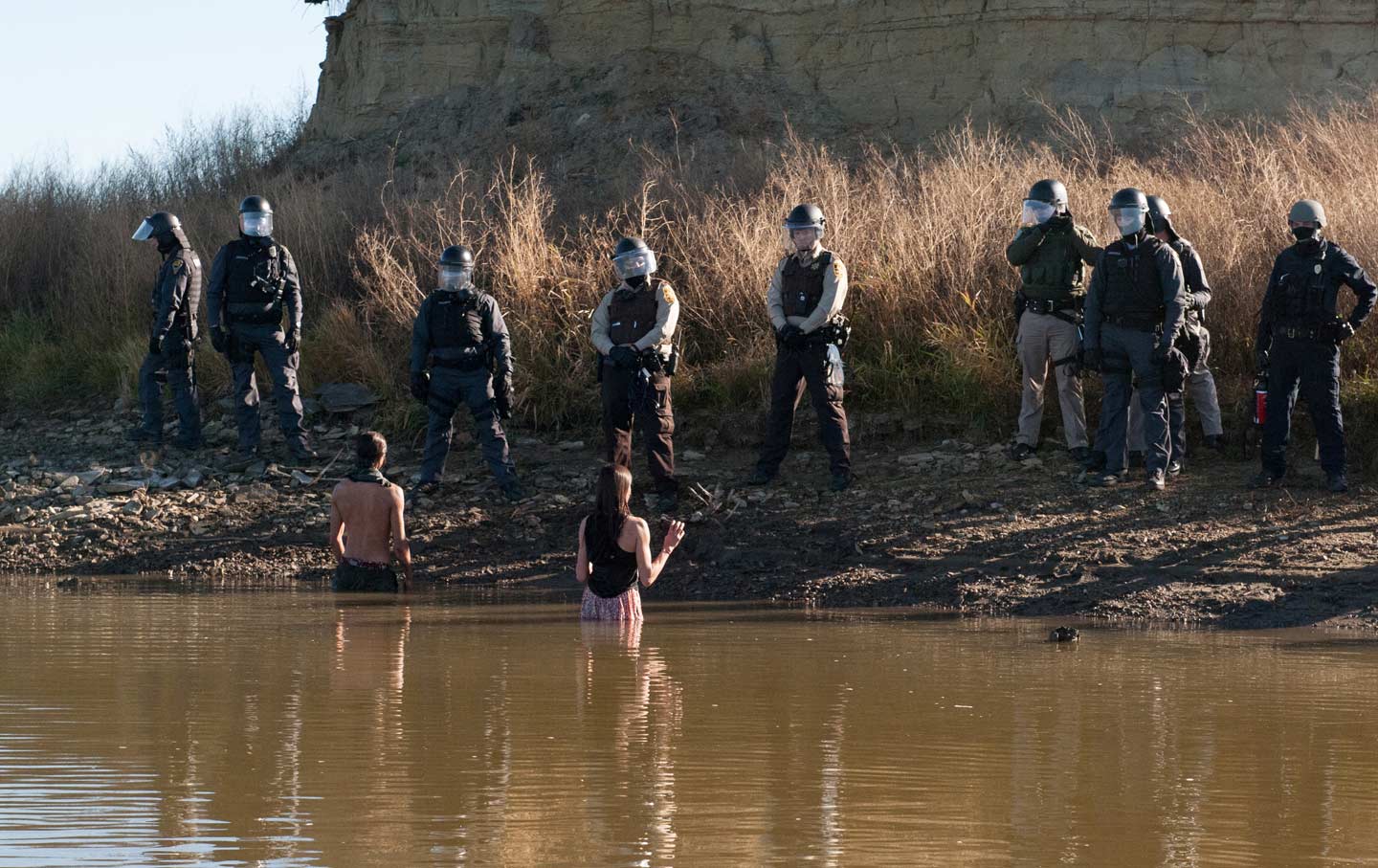 Two protesters stand in the river while police officers guard the shore near the Standing Rock Indian Reservation on November 2, 2016. (Reuters / Stephanie Keith)

Near Cannonball, ND—Hillary Clinton made a last-ditch effort to capture the elusive Bernie Bro vote in battle-weary North Carolina last Thursday. She brought Senator Bernie Sanders of Vermont to a rally of 5,000 in Raleigh, where the two hugged, joked, and blasted Donald Trump’s bigotry.

But the Democratic candidate for president missed a real opportunity in the waning days of the campaign to attract not just a few thousand but tens or even hundreds of thousands of her former rival’s supporters.

She could have said something—anything—that showed support for or even sensitivity to the indigenous-led movement here against the Dakota Access Pipeline (DAPL).

It seems the Clinton campaign still doesn’t know that the young people, environmentalists, and social-justice champions of all ages who flocked to Sanders’s progressive campaign have passionately embraced the “#NODAPL” movement. Hundreds of them are here, camping out at the main camp, Oceti Sakowin (Lakota for “the tribes of the Seven Council Fires” or “The Great Sioux Nation”).

Untold numbers are “Standing with Standing Rock” from where they live. They’re donating money, organizing and joining local NODAPL rallies, and sharing information and outrages on social media. (The raid of a prayer circle at a pipeline construction site by jack-booted SWAT teams who emerged from armored vehicles with rifles drawn is one of the most recent to fly across the Twittersphere.)

In short, NODAPL, here at Standing Rock, and everywhere, is where the Clinton campaign could locate scores of disappeared Berniecrats.

It’s no wonder. The stand at Standing Rock resonates with some of Sanders’s marquee issues: climate change, protecting the environment, the influence of Wall Street on the political process, racial and social injustice, and the exploitation and oppression of Native Americans.

At a time when the nation—and the world—has pledged to decrease climate-changing fossil fuels, the $3.8 billion Dakota Access Pipeline would transport 500,000 barrels of highly combustible crude each day nearly 1,200 miles, from the Bakken fracking fields in northwestern North Dakota through four states to southern Illinois.

The Standing Rock Sioux Tribe has been waging a legal battle to stop the pipeline developer, Energy Transfer Partners, which is funded by major Wall Street banks, for more than two years. The tribe has identified sacred burial grounds that the pipeline would desecrate and is worried that a spill could wreck its water supply, used for drinking, fishing, and irrigation. (In Indian Country, the pipeline is known as the black snake, after a Lakota prophecy that warns of the destruction of Mother Earth if the snake is not destroyed.)

The pipeline’s powerful champions in North Dakota, including the governor, insist the pipeline will be safe. Yet their actions suggest otherwise. While the pipeline was originally slated to snake under the Missouri River near Bismarck, the state capital, concerns about an oil spill’s wrecking the city’s water supply caused the route to be moved—half a mile from the Standing Rock reservation, home to one of the poorest tribes in the country.

By early August, the Standing Rock “spirit camp,” which had been set up by a couple of tribal members in April on reservation land overlooking the confluence of the Missouri and Cannonball Rivers, was attracting tribes from not only the Great Plains but all across the country.

Sanders spoke out against the pipeline at a NODAPL rally near the White House in September and has issued increasingly stronger statements standing with Standing Rock. (Notably, he has been openly opposed to the pipeline since as far back as November of last year, if not earlier.) In mid-October, he and four other Democratic senators —Patrick Leahy, his counterpart from Vermont; Dianne Feinstein of California; Ben Cardin of Maryland; and Ed Markey of Massachusetts—sent President Obama a letter urging him to halt the pipeline.

Clinton had the chance to speak out in late October, when school children from Indian Country, including 11 from Standing Rock, “occupied” her Brooklyn campaign headquarters. They wanted to get a letter to her, urging her to help them.

Instead, the campaign issued a statement worthy of King Solomon. It said, in part, that “all of the parties involved…need to find a path forward that serves the broadest public interest. As that happens, it’s important that on the ground in North Dakota, everyone respects demonstrators’ rights to protest peacefully and workers’ rights to do their jobs safely.”

In other words, as Bill McKibben of 350.org put it, the campaign “managed to make a statement about the Dakota pipeline that literally says nothing.”

President Obama, who has dodged the pipeline controversy for months, made a surprise statement the other day, telling NowThisnews, which posts content directly to social media, that he believes there is a way to “accommodate sacred lands of Native Americans.”

“I think,” he continued, “that right now the Army Corps is examining whether there are ways to reroute this pipeline.”

Clinton, fighting the fight of her life for the presidency of the United States, can still take a winning stand.

Correction: An earlier version of this article stated that Bernie Sanders “came out” against the Dakota Access Pipeline this past September. As the piece now makes clear, he made his opposition known much earlier.