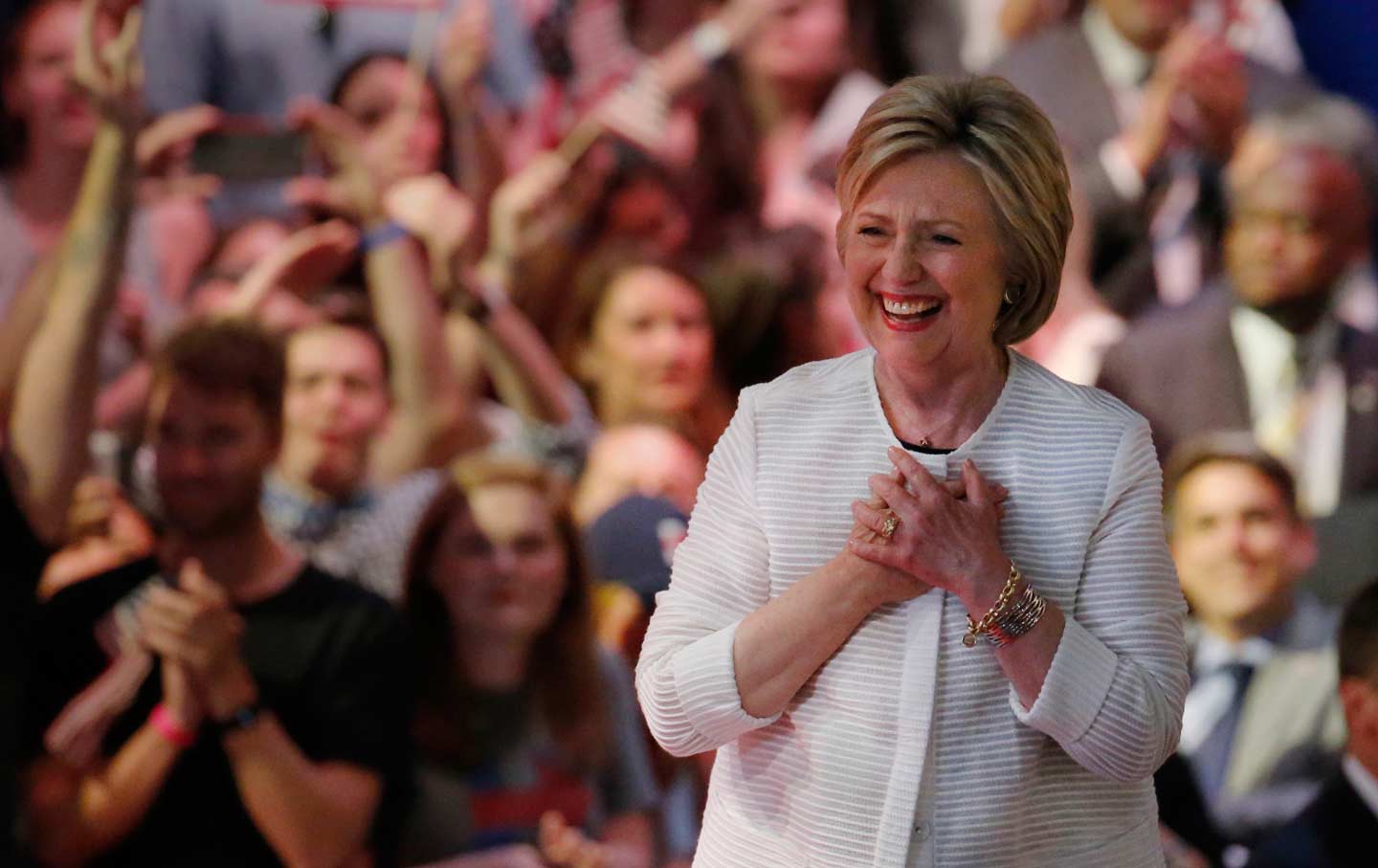 House Democratic leader Nancy Pelosi likes to talk about how wrong it is that American history tells us that women “were given” the vote in 1920. “Women worked, struggled, marched, demanded the right to vote. That’s what it took,” she told me in 2013. So it was too bad, in a way, that Hillary Clinton’s winning a decisive majority of pledged delegates Tuesday night was overshadowed by Monday night’s odd media call that she’d already gone over the top, defeating Senator Bernie Sanders with superdelegates.

Despite what conspiracy theorists may believe, though, Clinton wasn’t “given” anything—she worked her ass off, from caucuses to primaries to debates. She won surprising victories and endured unexpected losses, just as she did in 2008, just as suffragettes did in the 19th and early 20th century. But in 2016, just like in 1920, but not in 2008, that hard work paid off, and Clinton ultimately won, becoming the first female major-party nominee for president. The country is a better, more inclusive place because of this accomplishment, in a lasting way.

That unfortunate Monday superdelegate call didn’t manage to upstage Clinton’s raucous victory party in Brooklyn on Tuesday night. My concern about Clinton’s achievement being overshadowed in the media by Sanders’s continued run proved unfounded. At a certain point on Monday, it seemed like the media realized that the “first woman nominee” storyline might be more exciting to their audience than doing the delegate math for Sanders and trumpeting his promise to fight on to the convention.

In 1960, Democrats nominated (and elected) the first Catholic president; in 2008, they did the same with the first black president; now they’ve put forward the first woman nominee, to run against the ultimate avatar of male anxiety, Donald Trump. This will be another historic election, and polls say it is likely to have the same result as the last two.

“The White House has been the ultimate tree house in America with a giant ‘no girls allowed’ sign on it.”

“The White House has been the ultimate tree house in America with a giant ‘no girls allowed’ sign on it,” Pat Schroeder told MSNBC Tuesday afternoon. Schroeder, who seriously considered a presidential run in 1987 but gave it up tearfully, also said she thought Geraldine Ferraro’s 1984 vice-presidential nomination would make it routine for Democrats to put a woman on the ticket. Instead, unbelievably, it took 32 more years. This time, though, a woman is on top.

It was hard to be in that joyous, multiracial, heavily female Clinton crowd in Brooklyn and not think of the women on whose shoulders Clinton was standing, like Ferraro and Schroeder. But I thought most of Shirley Chisholm, the first Democratic woman to run for president in 1972. A friend who was torn by the bitter Clinton-Sanders contest in New York told me she wrote in Chisholm in the primary; it was the only balm for her sore political soul. The African-American Brooklyn congresswoman won the state of New Jersey and went to the convention in Miami with her own delegates, but she wasn’t taken seriously. Twelve years later, I covered a protest by black women leaders, led by now-Congresswoman Maxine Waters, at the 1984 Democratic convention, because the party hadn’t bothered to consider Chisholm—or any black women—when they vetted and chose the first female vice-presidential nominee. With the Rev. Jesse Jackson a runner-up in the 1984 primary, that year marked the beginning of the transformation of the Democratic Party, its rescue from the desertion of its previous base, the white working class, by a new, younger, multiracial, majority-female base.

Appropriately, Chisholm led the video that introduced Clinton Tuesday night. “Those who think that the women’s liberation movement is a joke, I disabuse you of that notion. It’s about equal opportunity,” she said. Clinton’s win was a victory for Chisholm, too. It will never substitute for the nomination of a black woman, but it was a victory for that crucial voting bloc, who went an average of more than 80 percent for Clinton over the course of the primary.

All ears were determined to hear what Clinton would say to reach Bernie Sanders’s resistant voters, so many of them young dreamers. When the presumptive nominee came out at the Brooklyn Navy Yard, she quickly congratulated her rival. “Senator Sanders, his campaign, and the vigorous debate that we’ve had—about how to raise incomes, reduce inequality, increase upward mobility—have been very good for the Democratic Party and for America. This has been a hard fought, deeply felt campaign. But whether you supported me or Senator Sanders or one of the Republicans, we all need to keep working toward a better, stronger America. Now I know it never feels good to put your heart into a cause or a candidate you believe in and to come up short. I know that feeling well.”

The heart of her speech was her remarks about her mother, who Clinton called “the rock until the day I was born until she left us. She overcame a childhood marked by abandonment and mistreatment and somehow managed not to become bitter or broken. My mother believed that life is about serving others. And she taught me never to back down from a bully, which it turns out was pretty good advice…. I really wish my mother could be here tonight.”

I don’t think there was any woman at the Brooklyn Navy Yard who didn’t think of her mother, and if, like Clinton’s, she was gone, who didn’t wish her mother had lived to see this milestone. My 80-year-old aunt called me as Clinton was about to go on stage. She tells everyone who’ll listen that she’s staying alive until Clinton becomes president. There are so many women like her out there. It’s tragic that they are largely unseen by most campaign coverage.

Clinton needs to reach out to younger voters, especially women, to win the presidency and also to grow the Democratic Party so that it can win more congressional and statehouse races. But I remain confused about why older black and women voters—and particularly older black women voters—are so insignificant in the calculations of the noisiest Sanders supporters. They are much more likely to vote; maybe they should be given more importance? I know the children are our future—I have a millennial I adore. But she’s also been dismissed, because she supports (and has worked for) Clinton. I don’t want to sound like an angry white man, but the truth is, the only group you can safely deride socially—even in left politics—is older women, of every race. That’s become plain this election cycle.

But such derision can’t change the fact that Clinton won because of the support of those older women, especially black women. Back at the very start of this race, I got a glimmer of why Clinton would ultimately prevail over Sanders, in Waterloo, Iowa, a state where her narrow win—Iowa was expected to be a Clinton blowout for a while—was the first sign the Sanders campaign could give her serious trouble. The night before the Iowa caucus, I watched Congressman John Lewis work a room of Clinton volunteers in Waterloo, a multiracial city with the highest proportion of black voters in the state. Lewis bonded with everyone, but particularly with a Waterloo precinct captain named Vikki Brown, who at age 11 was part of the 1963 Children’s Crusade that answered Dr. Martin Luther King Jr.’s call from jail in that cruel, segregated city. Dogs leapt at them, and fire hoses scattered them in Kelly Ingraham Park, Brown recalled. Lewis got misty and grabbed her hands. “The first time I walked into that park I cried,” he told her softly.

On stage, Lewis didn’t talk about caucus math or viability numbers. “We’re here to build the beloved community, and redeem the soul of America,” he told the crowd of about 50 staff and volunteers. “Hang in there, keep the faith, continue to work. Your children, grandchildren and great grandchildren will be very proud of you. I really feel blessed to be here; you inspire me.”

Vikki Brown kept the faith. The next night, Clinton narrowly edged Sanders in the closest race in Iowa history. But in Waterloo, the precinct captained by Brown went 100 percent for Clinton, and gave her all 10 of its state delegates. “I rallied my community hard and long with phone calls, and door knocking in sub-zero temps,” she told me. “She’s a role model to men and women, young or older, black or white.”

"And the challenge now is to practice politics as the art of making what appears to be impossible possible."

In what was I think a coincidence, Wellesley released audio of Clinton’s historic commencement speech this week, the first time a student was allowed to address her graduating class. Clinton may be able to use it to reach young people, to remind them that she once was young and idealistic. Some lines could come from a Sanders supporter: “For too long our leaders have viewed politics as the art of the possible,” she told her classmates. “And the challenge now is to practice politics as the art of making what appears to be impossible possible.” We don’t know whether younger voters will hear those words as inspiring or as a sign that she’s sold out.

In the now-historic Wellesley speech—even more historic, now that she’s the Democratic nominee—Clinton paraphrased a T.S. Eliot poem, which she said established “there’s only the trying, again and again and again; to win again what we’ve lost before.” On Tuesday night, she won what she’d lost before. Now she has to win what she—what no woman—has ever won: the White House. She must also convince radical dreamers that such a win is radical in its own way. She hasn’t done it so far, but she will have the help of both President Obama and the horror show that is Donald Trump in the days to come.

“When he says ‘Let’s make America great again,’ that’s code for ‘Let’s take America backwards,’” Clinton told an adoring crowd. Her nomination is a step forward—even if she still needs to convince some should-be allies of that.