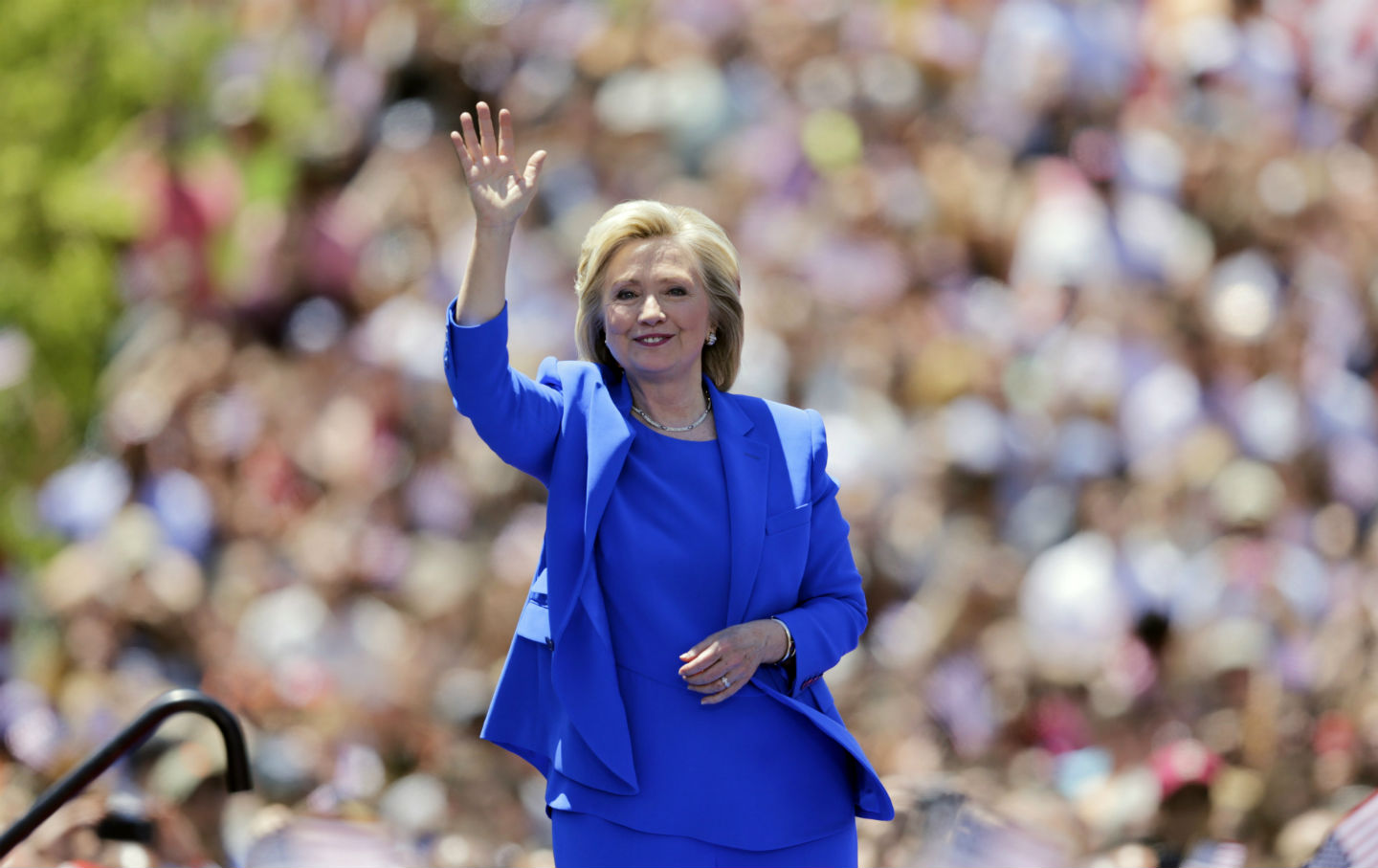 Branding is not everything in politics, but it does count for a lot in an era when coverage of campaigns owes more to the traditions of America’s Got Talent than those of Walter Cronkite. Candidate must define themselves, especially front-running candidates. And Hillary Clinton has from the start of her 2016 presidential run understood the need for some rebranding. What she tried in 2008 did not work. So it is time for something new.

Or perhaps something old.

Head for New York’s Roosevelt Island and formally launch the new campaign with a great big rally at Four Freedoms Park, a public space that recognizes Franklin Delano Roosevelt’s 1941 State of the Union declaration of the four “fundamental freedoms” that must be guaranteed for all: freedom of speech, freedom to worship, freedom from want, freedom from fear.

FDR outlined premises that remain essential values for the Democrats Clinton seeks to sway in her race for the party’s nomination, and for the great mass of Americans who must be roused to vote in November of 2016. FDR argued that “there is nothing mysterious about the foundations of a healthy and strong democracy. The basic things expected by our people of their political and economic systems are simple. They are:

Equality of opportunity for youth and for others.

Jobs for those who can work.

Security for those who need it.

The ending of special privilege for the few.

The preservation of civil liberties for all.

The enjoyment—The enjoyment of the fruits of scientific progress in a wider and constantly rising standard of living.

That’s a message that Clinton embraced Saturday—not just in the text of a speech that was drafted to reposition her politically as something more of an economic populist, but in her choice of a platform where she could celebrate “Franklin Roosevelt’s enduring vision of America, the nation we want to be.”

True enough. And there is space amid the broad rhetorical flourishes of FDR’s great speech provides plenty of a space for a mainstream Democrat to occupy. And Clinton sought to fill it with rhetoric about the “four fights” she says she hopes to wage as president: building a better economy; keeping American safe; strengthening communities and families; and repairing a broken political system by standing up for voting rights and fighting to get “unaccountable” money out of politics;.

Clinton hit most of the right notes, placing herself on the side of those who believe in the science of climate change, who are ready to invest in the infrastructure of the future, who seek to make it easier for immigrants to become citizens and who demand that the rights of women, people of color and LGBT Americans be respected. She was especially strong on the democracy issues, earning loud cheers as she declared:

We have to stop the endless flow of secret, unaccountable money that is distorting our elections, corrupting our political process, and drowning out the voices of our people.

We need Justices on the Supreme Court who will protect every citizen’s right to vote, (cheers, applause) rather than every corporation’s right to buy elections.

If necessary, I will support a constitutional amendment to undo the Supreme Court’s decision in Citizens United.

I want to make it easier for every citizen to vote. That’s why I’ve proposed universal, automatic registration and expanded early voting.

I’ll fight back against Republican efforts to disempower and disenfranchise young people, poor people, people with disabilities, and people of color.

What part of democracy are they afraid of?

In general, Clinton spoke with authority, delivering a laundry list of factoids, anecdotes, and general statements of principle that recalled nothing so much as the something-for-everyone speeches that former President Bill Clinton delivered during his 1992 and 1995 campaigns and that President Barack Obama delivered—in somewhat more focused form—during his 2008 and 2012 campaigns.

She restated what a core premise of those past campaigns, with her reference to “America’s basic bargain: If you do your part, you ought to be able to get ahead.”

By most political measures, that’s smart. First, the 1992 and 1996 campaigns were successful, as were the 2008 and 2012 races. Second, Clinton needs to put some serious distance between herself and the corporate crowd that has so frequently paid her to speak and that has donated so much to her campaigns and more.

Yet the speech on Roosevelt Island was short on populist specifics, especially when it came to the economic themes that will define her candidacy. Clinton seemed to recognize this, actually telling the crowd at one point that, “In the coming weeks, I’ll propose specific policies…”

If this was her actual campaign announcement, that would be expected. But Clinton announced two months ago. The “coming weeks” have come and she has been criticized for refusing to take clear stands on the hot-bottom economic issues of the moment: fast track, the Trans-Pacific Partnership, and the details of where trade policy should go from here, for instance. And while she says she wants to be a champion for those seeking a $15-an-hour living wage, she needs to say what that will mean.

In fairness to Clinton, she has time to get specific—and she promises to do so in planned policy addresses. But the clock is ticking. Long before she faces off with one of the several dozen announced and potential Republican contenders—who she blasted for “singing the same old song, a song called Yesterday”—she will engage in at least six debates with Vermont Senator Bernie Sanders, former Maryland governor Martin O’Malley, former Rhode Island governor (and senator) Lincoln Chafee and perhaps other Democratic contenders. Clinton’s the frontrunner and front-runners tend to err on the side studied vagueness, but the other candidates won’t let her get away with vaguely appealing statements of principle.

Nor will the moment. Clinton is right that the fundamental issues of the 2016 campaign will be economic, and that the desired responses will be populist. She articulated that understanding in the best sections of her speech at Four Freedoms Park, especially when she told the crowd: “Prosperity can’t be just for CEOs and hedge fund managers. Democracy can’t be just for billionaires and corporations. Prosperity and democracy are part of your basic bargain, too. You brought our country back. Now it’s time, your time, to secure the gains and move ahead. And you know what? America can’t succeed unless you succeed.”

When she delivers the specifics she promises, Clinton needs to jettison cautious rhetoric that pays too must deference to the “third-way” compromises of the past—“I’m running to make our economy work for you and for every American.… For the successful and the struggling”—and too little to the language of a realigning and transformational politics.

Clinton came to the right place to find that language. She was absolutely right to recognize the power and the majesty of FDR’s “Four Freedoms” message. But it was not the Four Freedoms message that secured Roosevelt the historic landslide victories—and governing majorities—of 1932 and 1936.

FDR embraced the specifics from the start of his first presidential campaign. “I will leave no doubt or ambiguity on where I stand on any question of moment in this campaign,” he declared on accepting the 1932 Democratic nomination.

Roosevelt was pointed—make that fiery—with regard to the economic fights in which he was prepared to engage. He respected small business and fought for farmers. But he was ready to call out the malefactors of great wealth—to borrow a phrase from distant cousin Teddy Roosevelt.

It was not late in his presidency but early in the 1932 campaign that FDR began to call out reactionary Republicans for being out of touch not just with the challenges of the moment but with the basic premises of America. They were, he suggested, economic royalists.

“There are two ways of viewing the Government’s duty in matters affecting economic and social life,” Roosevelt explained. “The first sees to it that a favored few are helped and hopes that some of their prosperity will leak through, sift through, to labor, to the farmer, to the small business man. That theory belongs to the party of Toryism, and I had hoped that most of the Tories left this country in 1776.”

it is not and never will be the theory of the Democratic Party. This is no time for fear, for reaction or for timidity. Here and now I invite those nominal Republicans who find that their conscience cannot be squared with the groping and the failure of their party leaders to join hands with us; here and now, in equal measure, I warn those nominal Democrats who squint at the future with their faces turned toward the past, and who feel no responsibility to the demands of the new time, that they are out of step with their Party.

Yes, the people of this country want a genuine choice this year, not a choice between two names for the same reactionary doctrine. Ours must be a party of liberal thought, of planned action, of enlightened international outlook, and of the greatest good to the greatest number of our citizens.

Hillary Clinton seems to recognize that Americans want a genuine choice, and she seems to be inclined to give it to them. Yet, a genuine choice requires that lines be drawn in the sand, that sides be taken. Clinton has not quite gotten there. Yet that is the direction she must go if 2016 is to be a year when her party elects not just a president but a government capable of tackling the economic royalists of our times.