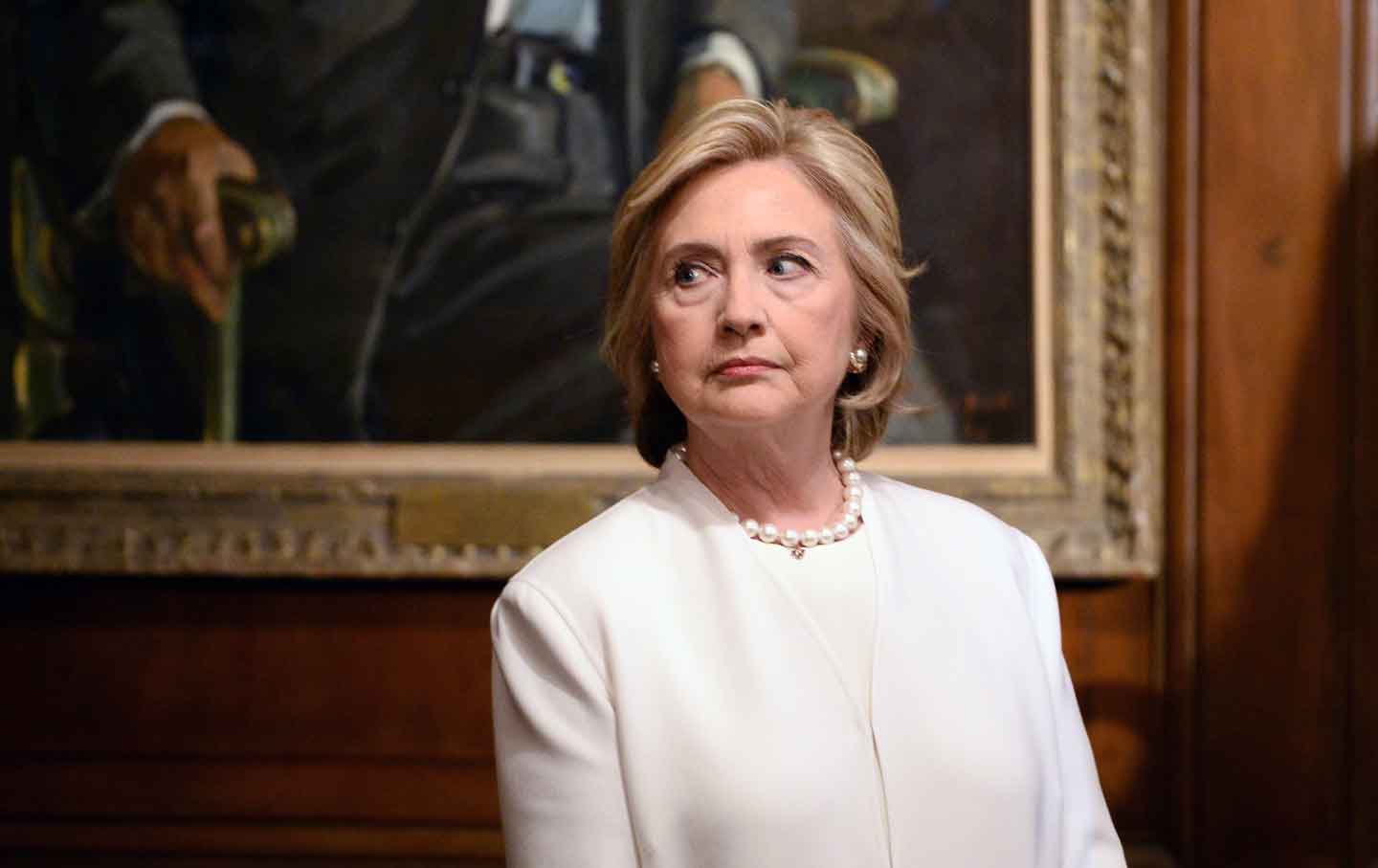 Hillary Clinton’s campaign is staffed with veteran Democratic advisers, fundraisers, pollsters, and consultants. Some of them worked on Barack Obama’s two presidential campaigns. Others cut their teeth working for John Kerry in 2004, or on Bill Clinton’s campaigns in the 1990s. They’re career Democrats.

A handful of Clinton’s key personnel also work for Washington firms that have lobbied or consulted for various corporate interests. Some are principals in those firms. And in some cases, those companies worked on behalf of their corporate clients to defeat or water down progressive legislation that Clinton touts as major Democratic accomplishments.

These kinds of ties between high-level Democratic operatives and multinational corporations and trade groups that seek to influence legislation are nothing new, but until recently they didn’t receive the level of scrutiny that they’re getting today. That’s partly because the 2016 campaign is being fought at a time when Thomas Piketty’s wonky tome on inequality hit the best-seller lists, the pope is condemning unbridled capitalism as “the dung of the devil,” and an unabashed democratic socialist is giving the presumptive nominee a serious run in the Democratic primaries. With the “Warren wing” of the Democratic Party on the rise, the party’s business as usual is no longer being taken for granted as it once was.

With the “Warren wing” of the party on the rise, business as usual is no longer being taken for granted.

But if we’ve known this for a long time, why is the critique sticking this time around? Even more than the broader political context, it’s due to the distrust that many within the Democratic Party’s liberal base have for the Clintons—both because of policy differences on issues like NAFTA and welfare reform and because of a more general unease with the Clintons’ big-money lifestyle and apparent comfort hobnobbing with various corporate titans. Campaign stories tend to gain more traction when they confirm something that voters already believe to be true of a candidate. For example, when, during a 2012 debate, former Texas Governor Rick Perry couldn’t recall what government agencies he’d shut down, it hurt him badly because he had a reputation as not exactly being a rocket scientist. But when Ted Cruz, the Ivy League debater known for his sharp intellect, suffered an identical brain freeze last November—he could name only four of the five agencies he wanted to shutter—it barely registered with voters.

In February, the Democratic National Committee rolled back an internal policy, pushed by Barack Obama in 2008, that barred it from taking contributions from federal lobbyists. Campaign finance reformers were rightly outraged. In addition to the questionable “optics,” it gave big corporations yet more ability to influence the party. At the same time, this was exactly the kind of inside-baseball, process-based story that tends to fall on deaf ears.

But it quickly blew up into a major controversy, due largely to a common misperception that the DNC had relaxed the prohibition in order to help Hillary Clinton win the Democratic primary. Headlines like “DNC makes ‘sweeping’ changes to save Hillary,” “How the DNC Helps Clinton Buy Off Superdelegates,” and “The DNC Just Declared War on Bernie Sanders’ Political Revolution” quickly spread across social media, enraging many Sanders supporters. Largely lost in translation, however, was the fact that the DNC was working with the campaigns to raise money to support the eventual Democratic nominee—and Democrats up and down the ballot—in the general election, not in the primaries.

The DNC’s decision should have outraged people on its merits. But the story only caught fire because it fit so neatly into a common view among Democratic base voters that the DNC has its thumb on the scale for Hillary Clinton.

You can see this dynamic playing out again and again. DNC chair Debbie Wasserman Schultz, a cochair of Hillary Clinton’s 2008 campaign, has been under intense scrutiny precisely because of the widespread view that she’s biased toward Clinton. Last week, The Huffington Post’s Zach Carter reported that Wasserman Schultz was cosponsoring a bill that would gut the Consumer Financial Protection Bureau’s (CFPB) efforts to rein in the payday loan industry. It was greeted by viral outrage, as it should have been. But this was just the latest chapter in a longer saga pitting predatory lenders against the CFPB. In October, I wrote about a dozen lawmakers—Democrats and Republicans—who had put their weight behind a virtually identical bill that the industry had lobbied hard to pass (among other actions they’d taken to hobble the agency). That story was particularly eye-opening because the legislators had received significant contributions from payday lenders and their trade groups immediately before or after they’d acted on the industry’s behalf. Because of the timing, watchdog groups said that it appeared to be a quid pro quo transaction—a serious ethics violation, to say the least. But despite being a more flagrant example of bipartisan corruption, without the DNC hook, the story got an unremarkable number of page-views and a little attention on social media, but nothing more.

Stories like that one are everywhere. At the Intercept, Lee Fang wrote, “Clinton’s campaign has been relying on a team of strategists and fundraisers, many of whom spent much of the last seven years as consultants or lobbyists for business interests working to obstruct Obama’s agenda” on the Affordable Care Act or Dodd-Frank legislation. Dig into the piece, and what you find is a typical roster of veteran Democratic consultants and strategists who work or worked for both political campaigns and firms that lobbied to water down the Affordable Care Act or Dodd-Frank legislation. Fang notes, for example, that Charlie Baker III, Clinton’s chief administrative officer, is a cofounder of Dewey Square Group, which consulted with some healthcare companies that lobbied Congress. But The Boston Globe described Baker, who cut his teeth on Michael Dukakis’s Massachusetts gubernatorial campaign and later managed his 1988 presidential bid, as “a highly sought-after Democratic strategist” who “is smart about politics and policy, a levelheaded, skilled manager.” These kinds of relationships are ubiquitous among the Democratic consultant class—and certainly not limited to consultants for centrist or conservative Democrats—but the Clinton hook made it a story.

Two weeks ago, Clinton faced some criticism for attending two fundraisers hosted by Wall Street types just before Super Tuesday. At Daily Kos, the headline was “Hillary Clinton is spending today fundraising from bankers capitalizing on the housing crisis.” The “dash for cash,” as Politico put it, was an acknowledgment that Clinton’s fundraising juggernaut wasn’t burying the Sanders campaign the way most observers had expected it to. The optics were certainly unseemly, and even many of Clinton’s supporters are uncomfortable with her overly comfortable relationship with Big Finance. But it’s noteworthy that both events were hosted by former bundlers for Barack Obama’s presidential campaigns and stalwart supporters of the Democratic Party. Obama later appointed the wife of one of the banksters to be the US ambassador to Trinidad. But those ties got significantly less attention at the time.

Clinton’s supporters might say these are examples of “the Clinton Rules” in action, and they’re not entirely wrong. The candidate has surrounded herself with veteran Democratic pros and raised a ton of cash from the party’s well-established fundraising network—both moves that seem to make sense when you’re running to be the Democrats’ nominee. Hillary Clinton is widely seen as Wall Street’s candidate, but her fundraising profile doesn’t look all that different from other Democrats who have raised the kind of money necessary to win statewide races in the tristate area. One of the reasons Bernie Sanders can claim to be independent of special interests is that he’s long represented a state where it’s dirt-cheap to campaign. Clinton raised $30 million for her first Senate campaign and $51 million for her second; Sanders spent $10 million combined on his 2006 and 2012 Senate races.

But the Clinton campaign seems to be blind to the fact that a large swath of the Democratic base is up in arms precisely because they perceive the party to be a fundraising machine that’s become too beholden to corporate interests. It’s a structural problem: Union money has declined as the cost of running a competitive race has skyrocketed. That’s the reality. And even if some of the criticism is only landing because of a baked-in suspicion of Clinton’s corporate ties, when you look past the heat of a primary campaign, it’s a net positive for the progressive movement that the compromises and inconsistencies of Democratic Party politics are being exposed to the light of day.