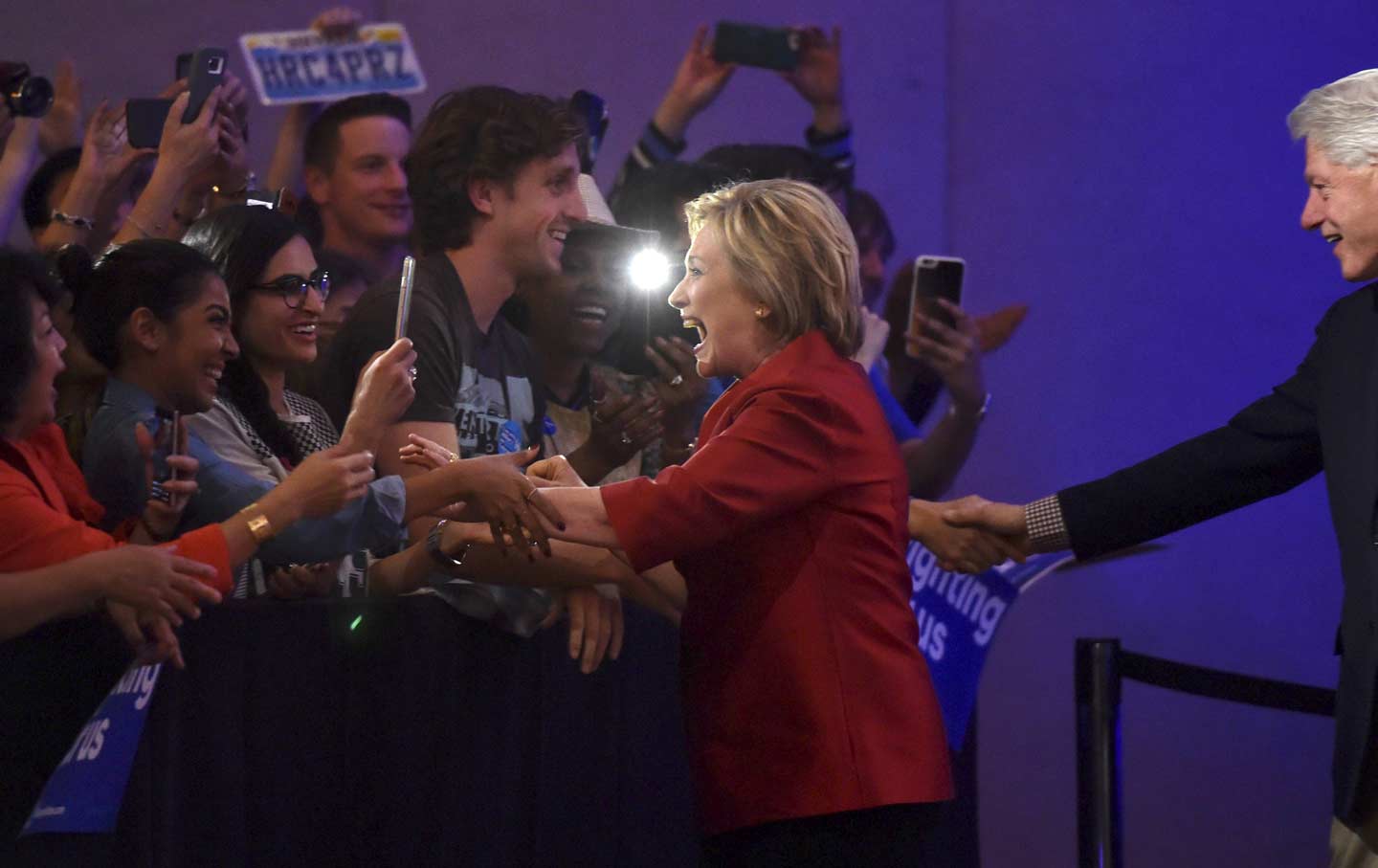 Hillary Clinton greets supporters after she was projected to be the winner in the Democratic caucuses in Las Vegas, Nevada February 20, 2016. (Reuters / David Becker)

They don’t call it Hillary Country for nothing. After a spirited contest that grew tighter in the weeks leading up to Nevada’s caucuses on Saturday, Clinton’s early and deep investments in the Silver State paid off to give her her first solid victory of the 2016 presidential primaries. Clinton won the Saturday caucuses by a five-point lead over Bernie Sanders.

In the end, Clinton took away 19 delegates to Sanders’s 14 by winning key caucus sites, including Latino-heavy precincts on the east side of Las Vegas. The Clinton campaign also won all six of Nevada’s special at-large caucus sites set up at casinos on the Las Vegas Strip for the hotel and casino workers who, along with other hospitality workers, make up the backbone of Nevada’s workforce.

Clinton’s volunteer, organizing, and even lawn-sign and sticker advantage over Bernie Sanders was apparent Saturday morning at three caucus locations in North Las Vegas, a city that’s more than a quarter Latino. At Desert Pines High School, two dozen Hillary volunteers and supporters in blue Hillary shirts gathered for an early firing-up at 10 am. Among the smattering of early-bird caucus goers who waited in the sharp morning sun was Mamo Woldegiorsis, 60, and his wife Timitu Siyoum, 53, who said the two immigrated from East Africa 30 years ago. “He’s a nice guy, the other guy, but I choose Hillary,” Woldegiorsis said. His wife concurred. There was not a Bernie Sanders supporter or volunteer at the school an hour before caucusing got under way.

“We get teased about Latino time, but I’ve already answered questions for people in Spanish and it’s 50 minutes early,” said Alma Candelaria, who flew in from Washington, DC, to volunteer for the Clinton campaign. At nearby Rancho High School, Sanders volunteers and supporters were outnumbered by Clinton supporters, who laid out a breakfast of flautas, pico de gallo, salsas, and guacamole and tiled the cinderblock wall across the street with Hillary signs.

Forty minutes before the doors were set to open, Clemencia Morales stood fourth in line to register to caucus. “I had been registered Republican, but I said I want to switch to Democrat and they told me to get here early,” Morales, a 55-year-old grandmother of two who has lived in the United States for 28 years but only became naturalized just last year. She waited in line holding a door sign that Bernie Sanders canvassers had left at her home, and a postcard she’d received from the campaign.

“In my heart, though, I want Hillary. She has a lot of trajectory and history.” She credited her coming out to caucus to the Sanders campaign, though. “They’re the only one who contacted me. That surprised me,” she said. “They’re real interested in me and my people, that’s why I’m here.”

Around the corner at J.D. Smith Middle School, Clinton supporters cheered caucus goers as they walked in and, like at other sites, slapped stickers on every Hillary supporter. By 11 am, the lines were long, snaking in opposite directions from a narrow sign-in table, one out the front door of the school and another back toward the playground. Even before caucusing officially began, Clinton had a clear edge over Sanders (according to the rough proxy of the numbers of those wearing Hillary stickers).

Democratic Party representatives who were staffing the site didn’t have the necessary codes to formally open up the caucus, and 45 minutes later, people were still standing in lines that grew loose as folks got fidgety. Thomas Astudillo, 34, stood right next to Jenae Turman, 40. The two of them turned to each other and laughed, feigning shock when they learned that they were supporting different candidates.

Astudillo, a first-time caucus goer, said he considered both candidates, but felt that Sanders, “brings something different.” Turman, 40, a lifelong Las Vegas resident, said she was supporting Clinton because of her superior résumé and experience, but not without serious reservations. “Clinton was really cavalier about Black Lives Matter, saying ‘All lives matter,’ and I think she was under the impression that because most African Americans vote Democrat, they’d all vote for her,” Turman said. Turman said she was disappointed by Sanders too, especially with his comments this past summer on Black Lives Matter and police violence.

“To be honest with you, I don’t care for either one of them,” Turman said. But she waited in the sluggish J.D. Smith Middle School line because, “when you look at the clowns like Ted Cruz and Donald Trump and Marco Rubio, I have to vote for her.” She also considered it a personal duty not to waste the right that her forebears had fought so hard to win for black people’s right to vote. “Regardless if I don’t care for the candidates, for [my grandparents’] memory I have to look at the most qualified person, because I can’t throw up my hands and not vote.”

Miguel Soto, a member of Operating Engineers Local 12, stood outside in the shade of an overhang just next to the door of his precinct’s appointed classroom. “I like her views on immigrant and women’s rights,” Soto said. “Plus, being labor as long as I have, I’m going to stick with them.”

Once caucusing got underway after 1 pm—more than two hours after some people had first gotten in line—Clinton’s advantage became official. She won Precinct 4585, at J.D. Smith, by a large margin. The participants, most of them middle aged, leaned against the walls and sat in the neat rows of desk chairs typically used by middle schoolers. People got restless. The room was stuffy, and the precinct captains who were deputized to run the caucus struggled to keep neat counts. One Clinton supporter complained that she had to go to work by 2 pm, and another needed to make it to her granddaughter’s birthday party across town. Of the 71 participants, 45 supported Clinton and 26 supported Sanders.

By 2:30 pm, back at Caesars Palace, the Clinton campaign’s watch-party headquarters—volunteers, staffers, and high-profile supporters like Dolores Huerta—broke out in cheers when the AP called the news. Jorge Neri, Nevada organizing director for the Clinton campaign, attributed its strong showing to the kind of methodical ground game that took no shortcuts. “We were here ten months ago cleaning up our lists,” Neri said. It’s a crucial step for the uniquely transient Nevada population, who, in part because of the decimation wrought by the housing crisis and the predominance of the service industry, move often. “We were building our support throughout the entire summer, contacting people, re-registering them.”

The campaign also had special programs targeted to specific demographics. A high-school program brought youth into the campaign fold. A young women’s program engaged women of all races. Another program, dubbed Caucus Conmigo, brought Latinos to Clinton campaign offices every Thursday and Sunday for training sessions in Spanish in which they ran through mock caucuses. The campaign then worked to turn those people into volunteers and precinct captains who could become comfortable with the caucus system, which can be cumbersome, especially for Democratic caucus goers who haven’t had a competitive primary in eight years. “We knew it was always going to be tight,” Neri said. “And if we thought it was going to be [a win by] 20 points, the resources here and the work that we did wouldn’t have been what it was.”

Now Clinton’s Nevada team has sent her off with the momentum, and key support from voters of color, she’ll need as the Democratic primary moves on to South Carolina and Super Tuesday.