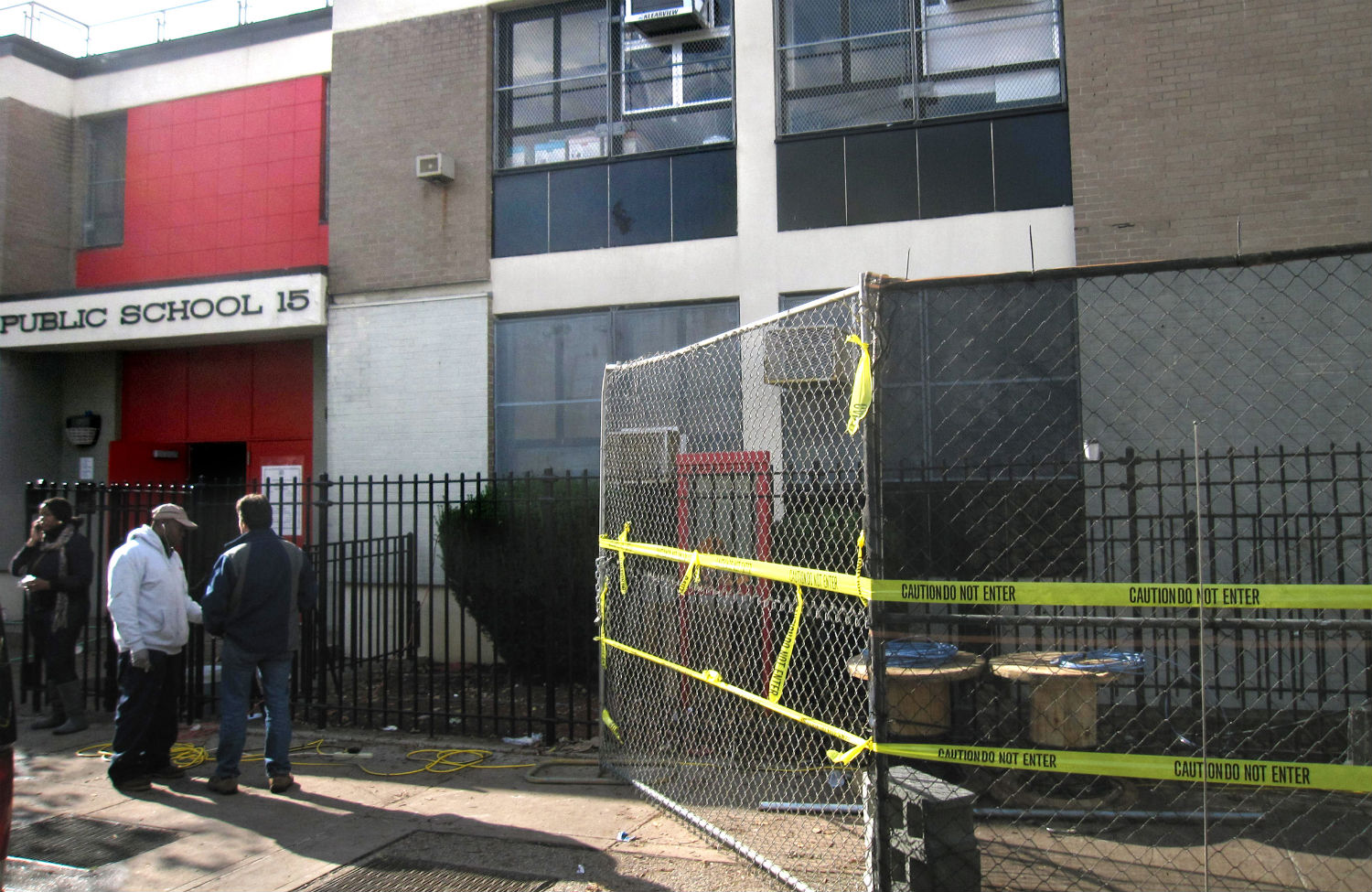 In the weeks following Hurricane Sandy, apartment buildings and schools across the Red Hook section of Brooklyn were left without power. (AP Photo / Beth Harpaz)

When Superstorm Sandy churned up fourteen-foot walls of water that slammed New York’s coastal communities in October 2012, they also washed away any false notions we had that we care sufficiently for poor people.

One year later, Bill de Blasio was the candidate to beat to lead the city. He pulled to the head of a clutch of Democratic candidates in August 2013 thanks to a populist platform that acknowledged the need for economic and racial equity. Asserting that de Blasio would be the mayor of all New Yorkers, his son, Dante, delivered the technical knock-out in the primary race when he appeared in an ad with his big afro and his run-down of de Blasio positions: tax the rich to fund early childhood education and after-school programs, build affordable housing and stamp out the New York City Police Department’s stop-and-frisk humiliation of black and Latino New Yorkers. By the August 13 mayoral debate, just a few days after the ad, de Blasio had vaulted from his number-two position trailing Christine Quinn to a six-point lead. In a city that is about 67 percent people of color—25.5 percent black and 29 percent Latino—we shouldn’t be surprised.

Now Dante’s dad is the city’s 109th mayor, and the question is no longer what he will do if elected but how he will deliver in the face of rising sea levels and rising inequality, in a city that is still trying to rebuild after Sandy while facing ongoing budget constraints. A look at an innovative project in Red Hook, the low-lying, low-income Brooklyn neighborhood known for its Ikea and Fairway Supermarket, should give the newly minted mayor some hints for how he can support smart, community-inspired projects to make meaningful change.

Red Hook, Brooklyn, is a spit of land jutting out over the New York Harbor and looking across to the gleaming high rises of the financial district in Manhattan. Its views are amazing, its poverty stark. More than 5,000 of its 11,000 residents live in the Red Hook Houses, one of the city’s largest public housing developments and a place where the median household income of $17,000 is well below the city average of $57,000.

Red Hook is cut off from the rest of the borough by the Brooklyn Queens Expressway and has no subway access, forcing residents to rely on the bus, their feet or, for those lucky enough to afford it, a car. In good times, this means inconvenience and self-reliance; during Sandy it meant a fourteen-foot storm surge and a whole neighborhood inundated and isolated. Some public housing residents were without power for almost a month thanks to out-of-date boilers and electrical panels. Low-income homeowners and small businesses are still waiting for federal dollars to help them renovate. Four small businesses have already closed and many others teeter on the brink of bankruptcy.

Red Hook isn’t the only community flooded by record storm surges, but what happened there represents a troubling trend. Roughly 2.5 million people live in the New York City/Greater Jersey Area Federal Emergency Management Administration (FEMA) Flood Zone. They are often poor. About 66 percent of the most vulnerable populations live within a half mile from the FEMA Flood Zone, while 29 percent of the most vulnerable populations live in the Flood Zones. Many are people of color.

Like many low-income and minority communities, Red Hook has its assets along with its adversities. While it is in the flood zone, it also has a model project—high-speed Internet access. In 2011, a community based youth organization, the Red Hook Initiative (RHI), wanted to engage more of the neighborhoods’ youth who lived nearby. To do that, RHI needed high-speed Internet access

Red Hook is one of the New York neighborhoods identified by the Center for an Urban Future as having a “broadband gap” for businesses. One local resident, who founded a neighborhood Internet service provider business called Brooklyn Fiber, said that the neighborhood would lose Internet access for weeks at a time. RHI, with the help of the Open Technology Institute at the New America Foundation and a Parsons School of Design graduate student, created a prototype for a wireless mesh network.

OTI has a detailed case study full of the technical details on its website. But to summarize, it installed a fairly inexpensive wireless radio transmitter on RHI’s roof and a router inside the RHI building that residents could use to access a wireless network in and around the building. When using the Wi-Fi, residents went to a server-based webpage with a “Shout Box” that allowed them to share comments or information. Wireless mesh networks can be expanded to cover greater geographic areas by simply adding more wireless radio transmitters. In March 2012, RHI allies added another radio transmitter on an apartment building overlooking the neighborhood’s Coffey Park. A resident of the building donated the electricity to power the radio transmitter. Now two public spaces were connected in a wireless network and the message board expanded.

Wireless technology is not only cheaper to use, it can be more resilient during superstorms like Sandy. The wireless mesh network connects mobile phones and computers to one another so they can share any Internet access; a cellphone- or computer-user can connect without going through a central source, like Verizon’s central station. Moreover, this innovation recognizes the importance of community participation in its development and applications. Residents wanted community bulletin boards and ways to find jobs and useful information. In a job-starved neighborhood, physically and psychologically cut off from so much of the city, this can save time and money.

When Hurricane Sandy hit, the RHI Wi-Fi network was a lifesaver. RHI still had power, so the Wi-Fi stayed up through the storm. In the days that followed, up to 300 people were using the network daily, according to OTI, communicating with loved ones, learning what was happening and getting help.

Perhaps because poor people are more likely to have a mobile phone than a computer, text messaging is the most common way residents could communicate. Within days of the storm, OTI had built upon the RHI mesh network to allow messaging. This meant that residents could now text their needs and location to a contact number. The technology then mapped the information and shared it so that others in the community could respond. Remember, many public housing residents were too elderly or ill to climb the many stairs that stood between them and help during the weeks that their buildings had no electricity, heat, water or working elevators.

The dominoes of expanding Internet connectivity rippled through Red Hook for a time, getting help to those who needed it. FEMA set up a thirty-day satellite on RHI’s roof to expand Internet access to coordinate response efforts. Brooklyn Fiber, the small, local for-profit ISP, volunteered an additional connection point to RHI Wi-Fi, while the RHI, OTI and Brooklyn Fiber trio were able to add a wireless access point to a local church that, like so much of Red Hook, was without power. The team added an uninterruptible power supply—an emergency power system that stores energy in batteries or a flywheel—that could run the routers for twelve hours at a time.

Today, RHI is training young people to spread the word and help others access the network. Called “the Digital Stewards,” these residents, ages 19–24, get paid by RHI to install, maintain and promote the Wi-Fi network and use technology to develop the community. Make no mistake; these are young people who look like Dante. From job creation to educational advancements for our children, healthcare access, public safety and civic engagement, high-speed Internet access can promote economic growth and community wellbeing. In Red Hook’s public housing, a stunning 75 percent of young people can’t find jobs.

Tyquan Carter is a rapper and lifelong Red Hook resident and community advocate. He is young, he is black, and the Internet gave him a voice and job opportunities. He made a short film about the storm called Tyquan’s Hook: a True Storm Story, for which he also wrote the script and music. If you have Internet access, you can watch the trailer on YouTube. Carter could make this documentary thanks to training he received from Dance Theatre Etcetera and RHI. He is now earning money doing promotional videos for a local church and a dance company while he looks for more work in a field he has learned to love. Carter uses the Web to promote his documentary, but Internet access represents more than that for Carter and so many other residents. It is also knowledge. He reads online books, blogs and uses YouTube tutorials on photography, camera functions and a range of other topics he needs to improve in his new craft. That means Internet access.

Far too many Red Hook residents still don’t have access to affordable Internet. The local ISP provider charges less than cable, but it still costs an average of $75 a month. Carter is two blocks from RHI and his aunt is five blocks away. Neither can access the free service. Like many low-income communities of color, Red Hook has fewer people using high-speed Internet than the average New York neighborhood. According to the Federal Communications Commission report released just before Hurricane Sandy, 19 million Americans still lack access because the physical infrastructure to connect to broadband doesn’t exist where they live. Thanks to the corporate telecommunications giants’, like Verizon, holding a monopoly and using expensive infrastructure, like copper wiring, high-speed Internet is often too costly to make subscriptions affordable. In urban communities, 57 percent percent of blacks and 58 percent of Latinos respectively versus 77 percent of whites had at-home Internet subscriptions in 2011. Blacks and Latinos are also more likely than whites to report that lack of broadband was a major disadvantage in their accessing employment opportunities, getting information on health, connecting to government services, staying abreast of news, keeping up with developments in the local community and acquiring new knowledge.

Red Hook and other local initiatives are trying to change this. The Institute for Local Self-Reliance has found that more than 3 million Americans have access to high-speed Internet through publicly owned networks, which have saved these communities millions of dollars and motivated incumbent providers to improve services because of increased competition. New York is getting a big infusion of federal dollars to rebuild after Hurricane Sandy. Mayor de Blasio should look for ways to leverage some of those dollars to better equip low-lying, low-income communities to weather the roiling seas of climate change and the economy.