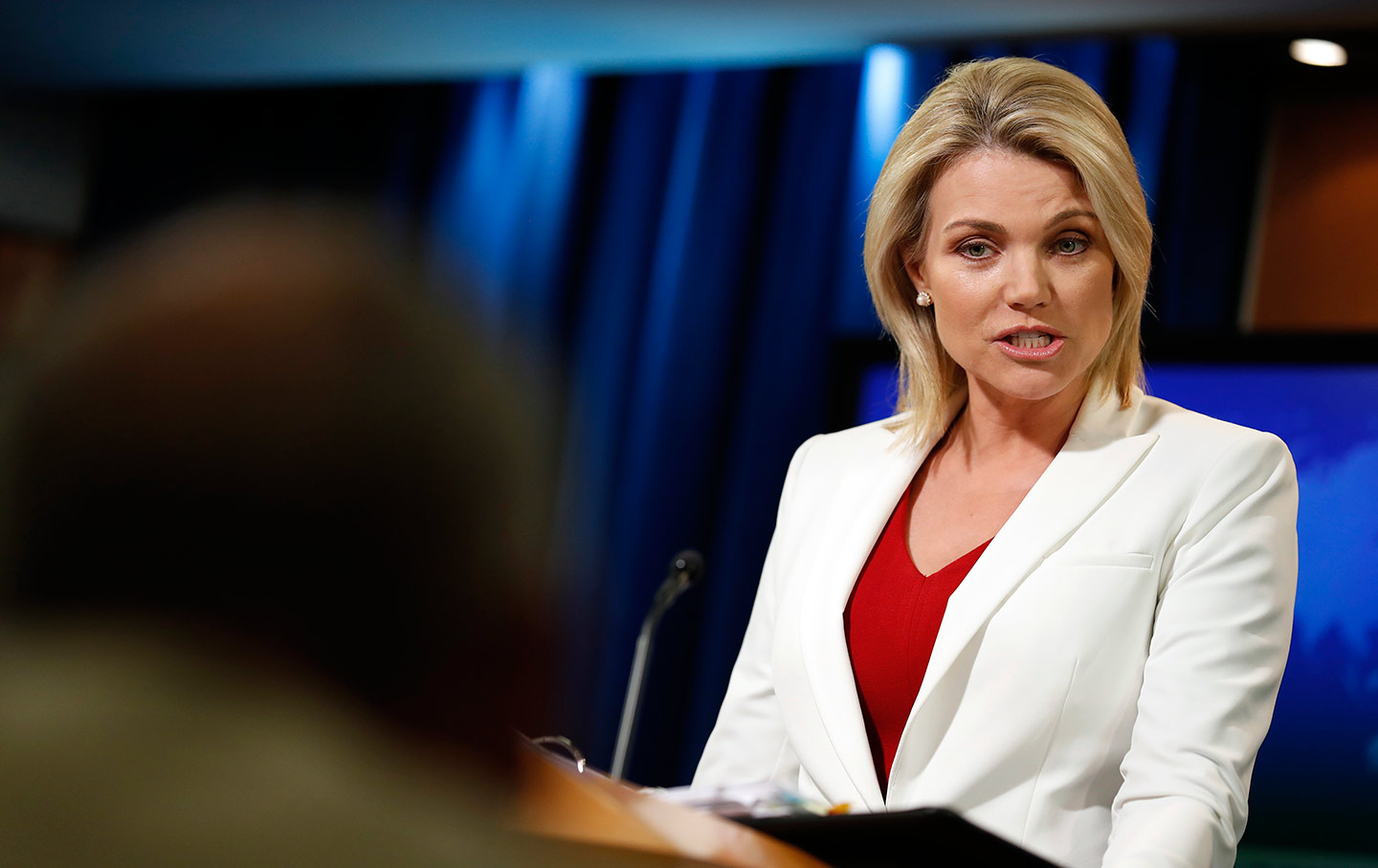 In the chaotic environment of the Trump administration, where policies are built on invented facts and history is unknown or ignored, Heather Nauert’s brief moment as the likely next US ambassador to the United Nations provoked much speculation about why this slipshod, doomed choice of an envoy was made and then undone.

Nauert’s appointment, announced by the president in December, was never sent to the Senate for confirmation, as criticisms mounted over her obvious lack of experience on international issues. Her stint as State Department spokesperson—reading statements from the increasingly aggressive Secretary of State Mike Pompeo—does not count as expertise.

She had come from Fox News, where she is remembered for leading a panel discussion among conspiracy theorists warning of Islamist dangers to American institutions.

Most recently, Nauert acknowledged that she had hired a nanny who was in the country legally but did not have a work permit. In 1993, Bill Clinton lost two qualified nominees for attorney general, Kimba Wood and Zoe Baird, for breaking employment laws. Women are almost always the family member caught in this trap.

This last excuse for why Nauert withdrew—having an ‘illegal’ nanny—is particularly rich in the light of the scores of undocumented immigrants working at Trump golf clubs, with no shade cast on the president.

Differences of opinion on what role Trump, Pompeo and John Bolton, the national-security adviser, want to see the United States play at the UN may be involved. Hard-liners on the right are pressing for a tough envoy like Richard Grenell, a sharp-tongued former US spokesman at the UN who is now the unloved US ambassador to Germany, from where he insults many Europeans.

From its inception in 1945, the UN has been a political as well as a diplomatic forum, and member nations—from dictatorships to multiparty democracies—have sent ambassadors who would in the best cases represent government policies while not losing sight of broad, even nonpartisan, national interests. Successive US administrations were represented by eminent politicians as well as seasoned diplomats or other prominent citizens. Trump has abandoned that tradition.

Stephen Schlesinger, historian of the UN and author of Act of Creation: The Founding of the United Nations looked back over seven decades of US-UN relations and, in an e-mail, named nine effective American ambassadors.

Among the earliest envoys, Schlesinger wrote:

“Warren Austin (1947–53) was a former senator from Vermont who persuaded the UN to recognize the establishment of Israel. He helped bring an end to the 1947 Indo-Pakistan war and arrange for UN observers to monitor the partition line. He won Security Council backing for the US-led UN intervention in the Korean War. All these actions set precedents.

“Henry Cabot Lodge Jr. (1953–60) helped set up the UN’s first peacekeeping force following the 1956 Suez Canal debacle, which later led to the creation of dozens of UN missions. But Lodge also hid the truth from the Security Council in l954 about the CIA’s overthrow of Guatemala’s democratically-elected government, and was able brazenly to refer the matter to a toothless OAS.

“Adlai Stevenson (1961–65) brought immense prestige to the post as an American liberal leader. He faced off with Soviet UN envoy Valerian Zorin over the Cuban missile crisis and, through negotiations with UN Secretary-General U Thant, helped end the nuclear showdown with Cuba. But because of his exclusion from secret administration deliberations he advertently lied to the UN about a US role in the Bay of Pigs invasion.”

Of the “middle” years, the 1970s and ’80s, Schlesinger wrote: “Andrew Young (1977–79) was the first African-American US envoy. In 1979 he assisted in the UN’s settlement of the Rhodesia conflict, resulting in the founding of Zimbabwe. However, he was later dismissed for secretly meeting with the PLO without State Department permission.

“Thomas Pickering (1989–92) was an experienced career foreign service officer, who, following the collapse of the USSR, persuaded the five permanent members of the Security Council to back a US-led force to expel Iraqi invaders from Kuwait in the first Gulf war. This was the first time in the UN’s founding that that all five veto nations agreed on a military mission, fulfilling Franklin Roosevelt’s vision of how the Council should act.

From the 1990s to the present, Schlesinger named: “Madeleine Albright (1993–97), is remembered for her campaign to deny Secretary-General Boutros-Boutros Ghali a second term. This led to the appointment of Kofi Annan, considered to be the UN’s second-most successful secretary general in UN history, after Dag Hammarskjold. Yet Albright thwarted a UN role in the Rwanda genocide, in which 800,000 Africans died.

“Richard Holbrooke (1999–2001) employed masterful political tactics to persuade the US Congress to pay its $900 million UN arrears guaranteeing the solvency of the UN. He also brought the HIV/AIDS crisis to the Security Council, the first time that the council dealt with a health issue as a matter of global security.

“Susan Rice (2009–13) helped negotiate the split-up of Sudan. She was one of the key figures establishing UN Women, signed the UN convention on the rights of persons with disabilities, arranged for special UN session on nuclear non-proliferation, and rejoined the Human Rights Council.

“Samantha Power (2013–17) led the UN effort to support global LGBT rights. She helped persuade the Security Council to sign the Iranian nuclear deal, and in December 2016, did not veto a Security Council condemnation of Israeli settlement policies.” (A rare break with US practice.)

One name not on Schlesinger’s list is Nikki Haley, Trump’s first UN ambassador—if that is any guide.

Ed’s note: On February 22, the State Department announced that the president would nominate Kelly Craft, The US ambassador to Canada since October 2017, as the next envoy to the UN. Her name has not yet been formally presented to the Senate for confirmation. Craft has been a big donor to Trump’s political campaign, according to Macleans her husband, Joseph Craft, owns a billion-dollar coal company, Alliance Resource Partner.