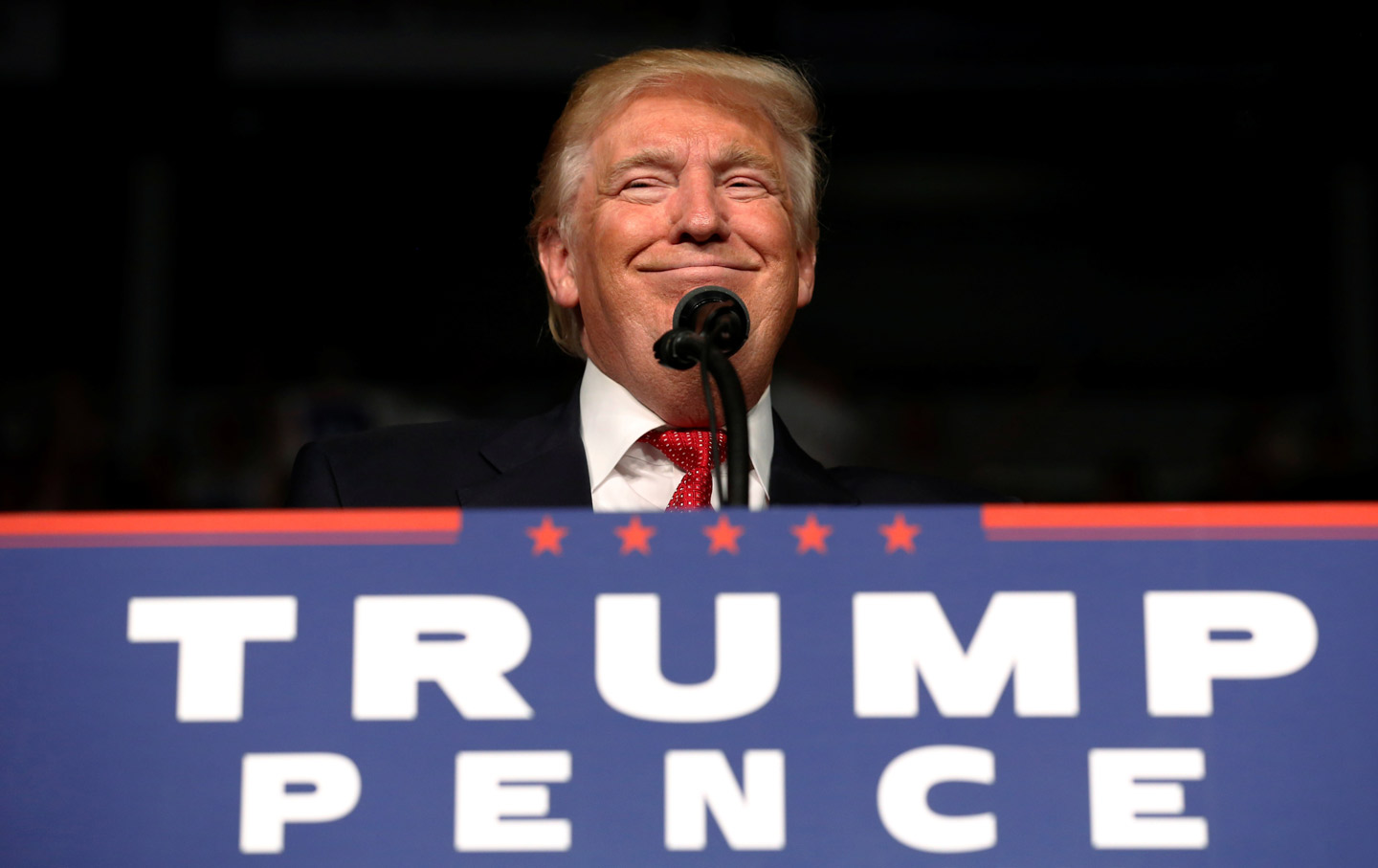 Not just smile or make funny faces. He does plenty of that. But really laugh—a guffaw, a belly laugh, even a chuckle sustained for more than a syllable’s worth?

Not likely. But for a single verifiable sighting, this possible next president of the United States does not laugh in public. We don’t know what he does behind closed doors, but before the cameras, the candidate hasn’t emitted deep, jocular bursts of air in nearly a year and a half.

This isn’t funny. It’s creepy. Or as Trump himself might say, There’s something going on.

And a lot of people are saying this. Well, maybe not a lot. But Brendan O’Connor wrote at Gawker (before potential Trump Supreme Court nominee Peter Thiel sued the site to death): “[A]fter watching hours upon hours of footage from his campaign rallies, cable news interviews, and debate performances, I realized that I could not recall having seen the Manhattan real estate developer laugh—like, genuinely laugh—a single time.”

And on Reddit, “Ebolatastic” pointed out that “the press has too many articles titled ‘Donald Trump is laughing at <group>’ right now. I can’t find any footage at all and cannot recall a single moment of laughter out of him ever in like 20 years of seeing him on TV.”

O’Connor, the Reddit thread, and I eventually dug up the same lone video clip that shows Trump laughing. The context: In February, Hillary had barked like a dog at a rally as part of a joke (which she pulled off handily, though you’d never know it from the “bitch”-festooned social media pile-on). Shortly after that, a real dog barked at one of Trump’s rallies.

It’s no surprise that Trump’s one true LOL came at Hillary’s expense. But it was the element of surprise—someone in the audience beat him to his punch line—that caught Trump off guard and forced him to bark out some genuine laughter. (If you find other examples, please send!)

On this matter, I admit I’m a Mirther, someone who fervently believes that Donald’s refusal to laugh in public reveals something dark and disturbing about him. Unless he can produce a long-form belly laugh, not once but many times, and prove its authenticity to my satisfaction, I’m afraid, folks, that I’ll have to send my people to look into this more closely. And they probably won’t believe what they find.

One possible reason why Trump won’t laugh: The less honest you are with yourself, the less likely you are to laugh.

But here’s what we do know:

Trump definitely has a sense of humor, albeit on the cruel side. He can certainly make people laugh, both with and at him. He has performed comedy, though less brilliantly than some hyperbolists would have it. (Mark Halperin swooned in April that Trump has “one of the greatest senses of comic timing since Charlie Chaplin.”) And Donald can, on rare occasions and under controlled conditions, gently goof on himself, as he did recently when he let nonthreatening talk show host Jimmy Fallon muss up his comb-over.

Not to mention, Donald eagerly uses the idea of humor—saying he’s “just kidding” or being “sarcastic”—to deny he was serious about his latest outrageous claim.

But it also seems true that Trump needs to be the center of attention and dominate everyone in his midst. It’s these very compulsions that may be stifling his laughter. He is always the star, not the spectator; the performer, not the audience. The audience laughs at the star’s shtick—with rare exceptions (see above), he doesn’t laugh at theirs. And whether the venue is a town hall, a debate stage, or Chuck Todd’s set, to Trump everyone is an audience.

The very physiology of deep laughter in response to humor (as opposed to polite laughter to keep things friendly) signals vulnerability: your muscles relax, your cheeks might flush, you lose control. Trump doesn’t seem to give up that kind of control.

But it’s Hillary, of course, who is perceived as being too controlled, and there’s definitely some truth to that. But, darn it, the woman can laugh! Like many powerful women, she’s caught in a vocalization vise. On one hand, she’s told she sounds too serious, angry, and “shrill.” (RNC chair Reince Priebus complained that she didn’t smile during the Matt Lauer national-security forum.) On the other, she’s told that she laughs too much, that it’s a cackle, a source of embarrassment. A video that repeats a few clips of Clinton laughing and spins it into 10 hours is supposed to be prima facie proof of witchcraft or something.

Yes, Donald Trump Can Win the First Debate—Here’s How

A truly frightening experience, however, would be watching 10 hours of unrepeated Trump clips and catching nary a giggle.

Another possible explanation for Trump’s laugh deficit: The less honest you are with yourself, the less likely you are to laugh.

That’s what Robert Lynch, an anthropologist at the University of Missouri, and evolutionary biologist Robert Trivers at Rutgers University, found and published in a 2012 paper, “Self-deception inhibits laughter.”

“There’s a huge correlation showing that people who score high in self-deception laugh less,” Lynch told me. Furthermore, he said, “there’s a pretty robust correlation between self-deception and an inflated ego, or unwarranted high self-esteem. Some of the self-deception is telling yourself that you’re greater, more powerful, smarter than you are.”

We know someone just like that, but why would that inhibit his laughter?

Trivers’s research, Lynch says, indicates that “it’s easier to deceive other people if you first lie to yourself. If you think you’re more amazing than you are, it’s easier to persuade others you are, too.”

By definition, lying to yourself requires that you deny reality and distort the truth. That carries all sorts of costs. “I tell myself the army I’m facing is small even though I’m getting constant feedback that it’s really large,” Lynch says. “The cost is we get slaughtered.” (Or, to use a current example, we might loot Iraqi oil and call it “reimbursement,” though the rest of the world never knew we were fighting on an expense account.)

Another cost to distorting the truth is that you’re less likely to even get why something is funny, much less laugh at it.

You can begin to see how self-deception may have stunted Trump’s sense of the absurd. It’s a lot harder to laugh when you don’t recognize absurdity. Think of how much Trump must have had to lie to himself, perhaps even unconsciously, in order to convince millions that Obama was born in Kenya, that “I alone can fix” everything, or that he will be the healthiest president “in history.” We don’t know whether he gets how absurd he sounds. But we do know he claims all of it with a straight face.

(By the way, the liars-laugh-less formulation doesn’t work in reverse: People who don’t laugh aren’t necessarily self-deceptive or narcissistic at all. Indeed, some people don’t laugh out of low self-esteem. “Self-deception,” Lynch estimates, “explains about 20 percent of why people don’t laugh.” Besides, if we didn’t tell ourselves little white lies, he adds, “we wouldn’t get out of the bed in the morning.”)

Tony Schwartz, the repentant ghostwriter for Trump’s bestselling The Art of the Deal, explained on MSNBC recently what drives Trump’s tendency to project his own faults onto others (Hillary is the bigot; she lacks a presidential temperament). “Trump has a deep self-hatred and insecurity,” Schwartz said. “Any criticisms make him feel inadequate, and it is intolerable to feel inadequate.”

Or to be laughed at. In his stump speeches, Trump often rails against countries like Mexico and China for “laughing at us.”

“Superficially, the problem that torments Trump is trade. But his language—they ‘beat’ us and ‘laugh’ at us—provokes the emotional power of shame,” Trump biographer (Never Enough) Michael D’Antonio writes at The Daily Beast. Trump, he says, is “all about shame—avoiding it himself, and inflicting it on others.”

The supply of shame inside Trump is so great and near the surface that it comes bubbling up in his campaign that we naturally look for its source. As his biographer, I see it in his struggle to satisfy a strict and demanding father and his banishment, at age 13, to a military academy in Upstate New York where, Trump has said, he was subject to violence at the hands of Army veterans who staffed the school.

Trump was major-shamed again, D’Antonio writes, “when he lost his Trump Airline and the Plaza Hotel and became a symbol of failure in the late 1980s and early 1990s. Out of this defeat he fashioned a comeback that saw him become richer and more famous than ever.”

As a businessman who sees every crash as an opportunity, Trump may also see any public airing of his shame as a prequel to ever-greater success.

At the 2011 White House Correspondents Dinner, for example, President Obama coolly humiliated the birther-in-chief, getting the crowd and soon the whole world to laugh at him, while Trump sat there stone-faced. In all likelihood, that experience motivated him to finally make a real run for the presidency.

As best we can tell, Trump’s whole psychological dynamic might be explained as a serial encounter with public shame over his fear of inadequacy. Again and again he takes risks that everyone thinks will end his campaign—saying John McCain is no hero, mocking a disabled reporter, attacking a Gold Star family. It’s as if he’s courting the thing that hurts him: Each encounter allows him to touch his shame and still walk away.

Like Dostoevsky’s The Gambler, Trump likes the thrill of getting so close to being exposed and still winning—until, of course, he finally loses, which may be what he really wants. Although, if he achieves that, he’ll probably just redefine it as a success.

It’s all too bad. As the shrinks say, “laughter relieves shame.” Laughing, especially at oneself, “is one of the main ways in which shame can be dissipated or released.”

If only Donald Trump could deeply, even convulsively laugh at himself—God knows, he has the material—he probably wouldn’t be running for president today.