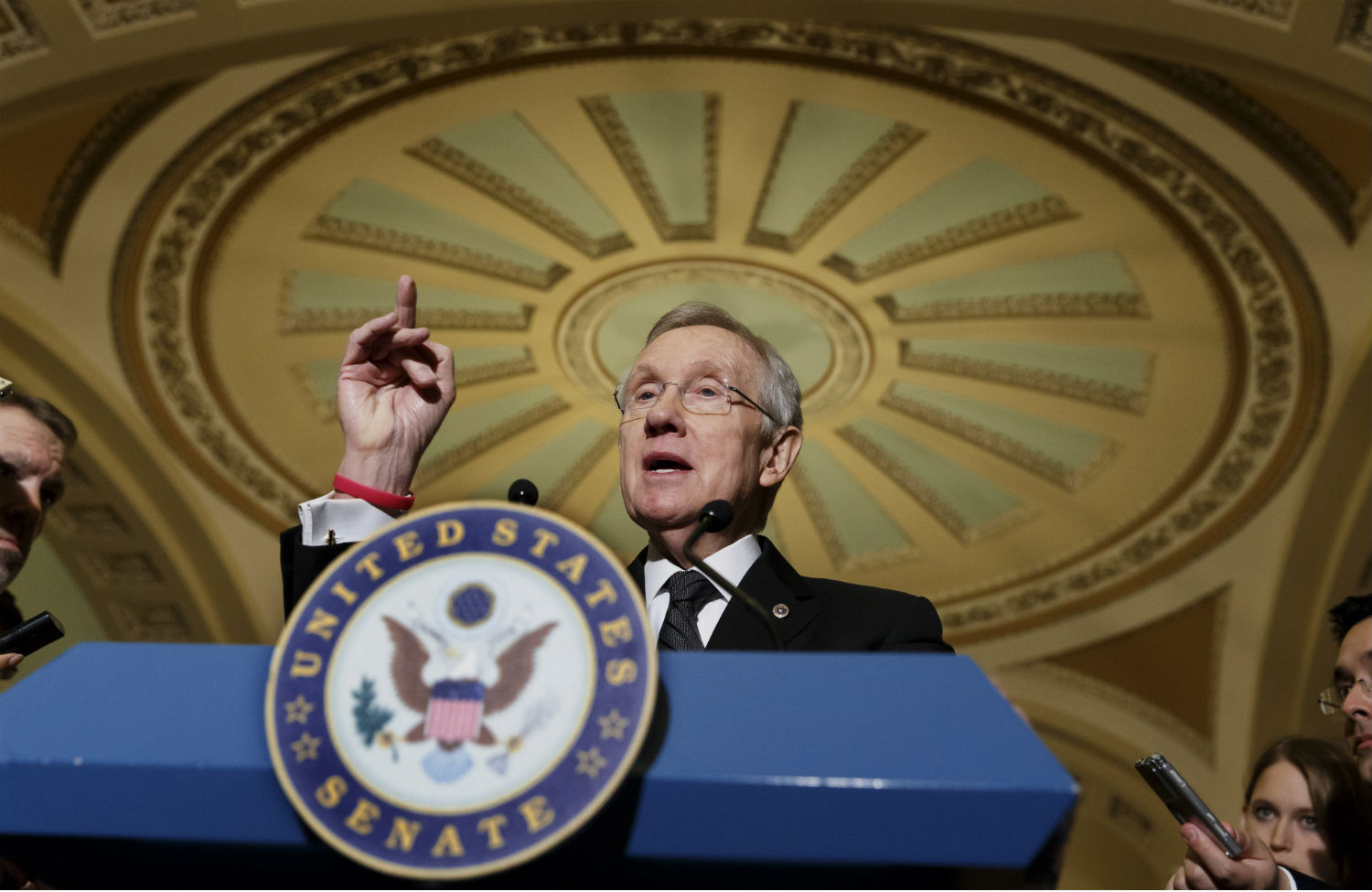 Fifty years ago, when Democrats were beginning finally to break the grip of Southern segregationists on their party, the way in which key congressional positions were filled was a major issue for the party. Southern members of the House and Senate tended to serve forever. As such, they took advantage of an archaic seniority system to secure committee chairmanships and even leadership posts—making a slowly progressing party seem still to be as reactionary as it once was.

A new generation of congressional Democrats, including Phil Burton of California in the House and Ted Kennedy of Massachusetts in the Senate, sought to shake things up. Unfortunately, Burton lost a key race for House majority leader in 1976, as Kennedy had lost an equally important race for Senate majority whip in 1971.

The Democratic Party opted against more aggressively progressive leadership, weakening its message for years to come. Indeed, as David Broder would write late in Ronald Reagan presidency, when Wright had been designated as Speaker of the House and Byrd was in position to become Senate majority leader: “It may turn out that the luckiest break President Reagan has in his current time of trouble lies in the character of the Democratic leaders of the 100th Congress.”

As Senate Democrats consider replacements for minority leader Harry Reid, who announced Friday that he would not seek a new term in 2016, they should remember the mistakes of the past. This, in turn, should get them thinking in bigger and bolder ways about their available options for filling a position with enormous potential to define the party’s image and direction.

Reid has been a more progressive majority leader than his predecessor, former South Dakota senator Tom Daschle. Senator Bernie Sanders, the Vermont independent who caucuses with the Democrats, was right when he observed Friday that on a host of critical issues Reid has been “a fighter for the low- and moderate-income people of this country.

But Reid has not always been effective as a communicator of progressive positions or strategies.

What Democrats should be looking for now is a Senate leader who will be absolutely progressive and absolutely effective.

The immediate speculation about replacing Reid followed conventional wisdom, with the top prospects identified as New York Senator Charles Schumer and Illinois Senator Dick Durbin. But, within hours, there were reports that Durbin was taking himself out of contention. Thus, any challenge to Schumer was likely to come from a “dark horse” contender—with prominent initial mentions going to Patty Murray of Washington and Michael Bennet of Colorado.

That sound you are hearing is the air going out of the party balloon.

That list is not the right place of beginning for Democrats who understand, now more than ever, that the party’s Senate leader is going to be ideologically and tactically strong. This is especially true if Republicans take the White House in 2016, in which case the leader of the Senate Democratic Caucus could well be the party’s most prominent national spokesperson. But the fact is that, even if Democrats retain control of the White House (as polls currently suggest is likely), the congressional party needs to step up.

There’s not much question that Schumer, a prodigious fundraiser with famously close ties to Wall Street interests, has the upper hand. That provides some explanation for why Durbin quickly sent signals about standing down. Durbin’s exit is unfortunate because, on some key issues, the Illinoisan has a more progressive record than Schumer. For instance, Durbin voted against authorizing George W. Bush to wage a war of whim in Iraq, while Schumer backed Bush’s agenda.

It is not just on foreign policy that Schumer has been disappointing. The New Yorker has cast some lousy votes on trade policy For instance, he supported permanent normalization of trade relations with China, when responsible senators such as Minnesota’s Paul Wellstone and Wisconsin’s Russ Feingold were voting “no.”

Murray’s record is even worse on trade, and it is hard to forget the compromises she made when “negotiating” with then House Budget Committee chairman Paul Ryan on the “Bipartisan Budget Act of 2013.” Besides, most of the talk Friday was not of a run for the top job by Murray but of the prospect that she might challenge Durbin for the caucus whip post that the Illinoisan now holds. As for Bennet, he’s been on the wrong side of a lot of education debates; and he’s the guy who, when asked whether he would back the removal of barriers to labor organizing with an Employee Free Choice Act proclaimed, “I would not support the language in that bill.”

The records of the mentioned prospects ought to be taken seriously. But the other measure that should be applied, in what for better or worse is a media age, ought to be the ability of potential leaders to communicate progressive ideas with passion and a clear sense of commitment.

For that reason, Democrats who want their next Senate leader to be an actual leader ought to cast a wider net.

Should they consider the “star” of the moment: Massachusetts Senator Elizabeth Warren? Of course. But don’t assume that Warren—whose office says she is not seeking the leadership post—is the only progressive prospect.

Warren’s name was floated Friday as a potential leader for a good reason: she is seen by a lot of Democrats as a leader.

As soon as Reid made his announcement, there was immediate advocacy for Warren to consider a leadership leap. “If Elizabeth Warren doesn’t run for president, she should definitely run for leader of the Senate,” says Neil Sroka, of Democracy for America, which has been part of the move to draft Warren as a 2016 Democratic presidential contender. “The election for Senate leader is not going to be a slam dunk for any early front-runner, especially someone like Senator Schumer. He’s closer to Wall Street while the Wall Street wing of the party is dying and the Elizabeth Warren wing is rising. It only makes sense that the next leader of the US Senate is either from that wing or deeply understands how to work with that wing.”

“There will likely not be a coronation to replace Harry Reid, and Elizabeth Warren is right up there with others as someone who would be taken very seriously,” the Progressive Change Campaign Committee, which has worked closely with Warren, declared. “Warren’s lifetime of fighting for the little guy against Wall Street power—including her upset victory on the Consumer Financial Protection Bureau—shows she can think big, wage tough fights against powerful interests, and win key votes in the Senate. She’s the definition of a leader, and that’s why her colleagues and millions of Americans respect her and are inspired by her rise.”

Warren’s strengths are well known: the base loves her, the media pay attention to her and the party needs her ideas. Reid, Durbin and Schumer have acknowledged the importance of what Warren has to offer the caucus—fashioning a position on the leadership team for her after Democrats lost control of the chamber in 2014. But even some of Warren’s most ardent enthusiasts argue that her talents might be better utilized in the White House, or as an outspoken rank-and-file senator. (Remember that Ted Kennedy survived his leadership defeat to become a definitional legislator.)

The best argument for putting Warren at the head of Senate Democrats is that—if she is not going to seek the presidency, as she says she won’t—then she ought to seek the best platform that is available for advancing an agenda.

The simple reality is that Democrats need national leadership with more than bully pulpits. The party needs national leadership that can move from a position of strength at the legislative level. That does not necessarily mean that Warren is the right candidate to lead Senate Democrats. But it definitely means that Democrats who are serious about the party’s future have every right, and every reason, to suggest her for the post.

There are other prospects who should be on the list, as well.

Consider Ohio Senator Sherrod Brown, who is every bit as populist as Warren and has a particularly strong record as a leader in fights for breaking up big banks and against failed trade policies. On top of that, Brown voted (as a House member) against going to war in Iraq and against the Patriot Act.

Brown has won two tough elections in the ultimate swing state of Ohio. And he has done so by figuring out how to be very progressive and very appealing to a broad cross-section of voters. He’s close to labor, but he is also close to farm and rural groups. He has never had it easy politically, and this has made him a unique senator—with strong skills when it comes to effectively communicating a progressive vision on complex economic and political issues. That’s something Senate Democrats could use.

Consider, also, Jeff Merkley, the progressive Democrat from Oregon who, with Tom Udall of New Mexico (another appealing leadership prospect), has been in the forefront of working to reform both the Senate and a broken political process. Merkley is especially well qualified for leadership of a party caucus and a legislative chamber, as the former Speaker of the Oregon House of Representatives.

The bottom line is that the selection of a new Senate Democratic leader need not be a contest among senators who simply happen to be senior, predictable choices or compromise candidates. It’s an opportunity for Democrats to think bigger, and better, about leadership. And if ever the party needed to do that, it’s now.