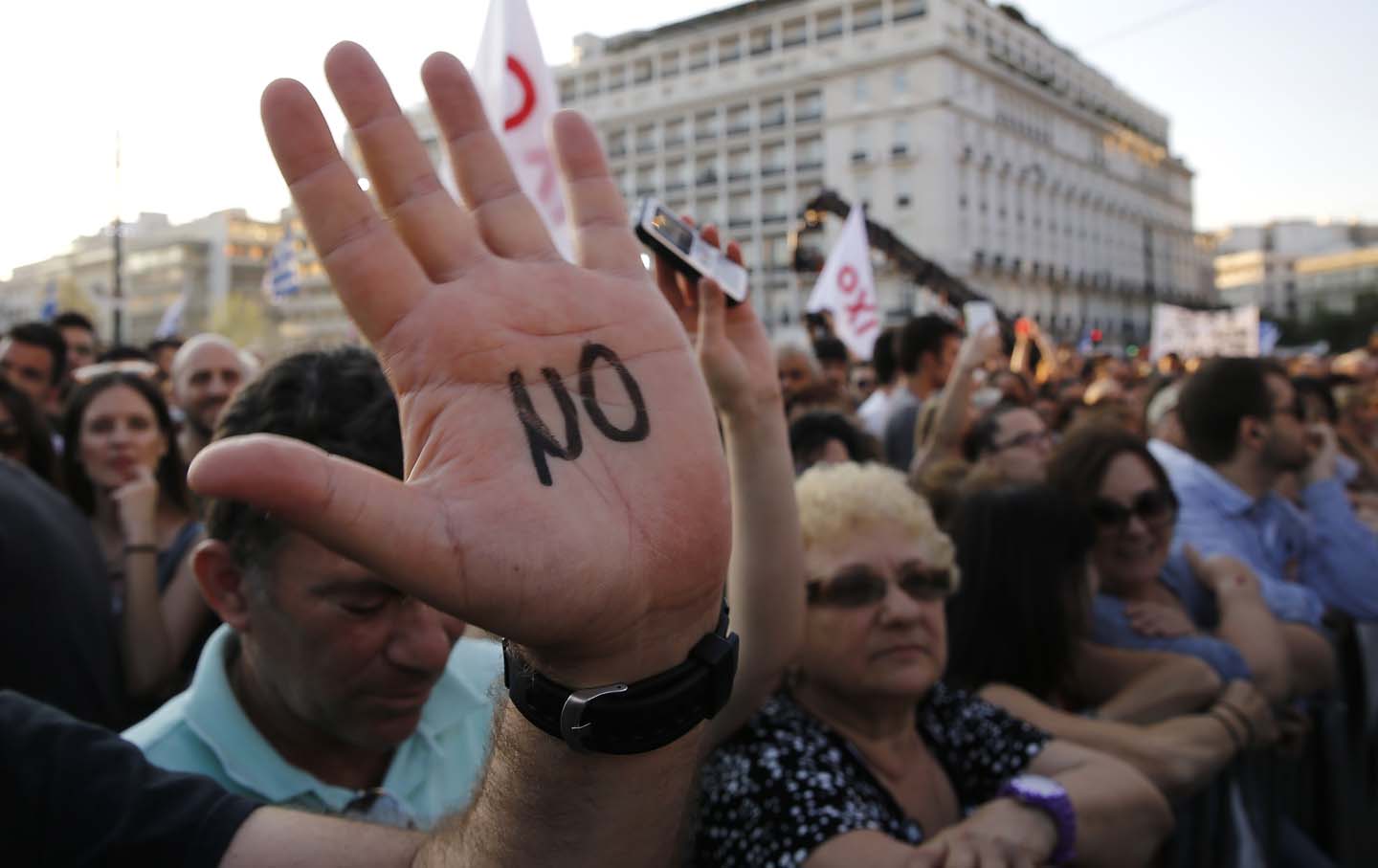 A demonstrator at an anti-austerity rally in Syntagma Square in Athens, July 3, 2015. (Reuters/Yannis Behrakis)

Athens—Making history means not knowing what comes next. I knew that in theory, but I hadn’t known what it feels like until these last two days in Greece. Nor had I understood how an unimaginably complex and confusing landscape can crystallize, through a formal (if flawed) democratic process, into something that looks like an expression of national will—and in that shape become a player on the world stage.

The question put to the Greek people in yesterday’s referendum—whether to accept the bailout deal offered the previous week by the country’s creditors—was either a misleading fudge or a masterpiece of constructive ambiguity, depending on your point of view. Some people (mostly on the “No” side) thought they were voting against austerity; others (mostly on the “Yes” side) thought they were voting to stay in the eurozone. Prime Minister Alexis Tsipras’s insistence in the days before the vote that there was no question of leaving the euro and that a No vote would only strengthen the government’s hand with the creditors incensed even some of his supporters, who felt he was, at best, patronizing the voters and, at worst, lying. And yet the answer returned—a solid 61.3 percent for No—has a surprising clarity. The No vote is a no to austerity. It means: We can’t and won’t do this anymore. Deal with it.

Will Europe’s Leaders Push Greece to the Breaking Point?

From the outside, watching the young waving flags in Syntagma Square last night, the vote might look like some sort of grand heroic gesture. It certainly took courage. With the banks closed, pensioners standing anxiously in line to collect their money, businesses going into lockdown, flash floods of fear pouring from Greece’s private TV channels (with help from the foreign press), and a drumbeat of dire warnings from European leaders, the Greeks have lived through one of the hardest weeks of this whole five-year nightmare. Like a parade of zombies, the old politicians who brought Greece to this pass were taken out of mothballs to admonish the populace. On the day of the referendum, one channel ran a ticker: “The choice: Greece or Zimbabwe.” Martin Schulz, the president of the European Parliament, said Greece needed a regime change to continue the negotiations.

But the barrage backfired. None of this made much impression on people I talked to at polling centers in the center of Athens. In lower-middle-class Gyzi, the atmosphere at the local school was much more subdued than at the January election. Faces were anxious, thoughtful. Elderly people walked slowly across the playground, made their way upstairs, helped by their children or the young policeman on duty (the elevator was broken). “People are keeping themselves to themselves,” one man said to me. “I feel like I’ve been duped: We’re voting on an offer that’s no longer on the table.” But he was voting anyway. “Yes. Because I should.”

Eleni, tall and blonde, came out with the kind of line journalists love to quote. “Just imagine if we voted Yes,” she said. “They’ve dug our grave for us; do they want us to pull the slab over our heads? They’ve put the gun to our temples and now they’re waiting for us to pull the trigger.” But on the whole there was little bravado, no illusions in evidence. There was anger, but sunk inwards: a kind of patient bleakness.

“We won’t be saved by Yes or No,” said a gentleman in his 80s. “It’ll be bad either way. But one thing will change: They’ll know they don’t have our agreement for what they’re doing to us. The government may have made mistakes, but the position of the Europeans has been cruel, oppressive, humiliating, shockingly inhuman. They’ll get their money. But they have to realize we need time to recover first.”

“Don’t get me wrong—I want Europe. But not this Europe.”

Tina and Thanos, with two small boys, came smiling to the polls, but they’re not hopeful either. Thanos is unemployed; Tina works for a drug company and hasn’t been paid for months. Dinner comes in tupperware boxes from her retired parents. “Whether it’s no or yes, it’ll be the same for us,” she said. “We’re not hard core, but maybe we’d be better leaving the euro and starting again. Don’t get me wrong—I want Europe. But not this Europe.”

In the wealthy suburb of Psychiko—one of the very few precincts that returned a Yes majority—people seemed more fired up than they’d been at the election. Bright Yes stickers adorned blazer lapels and weekend blouses. At the church next door a christening was in progress, with children running around and a man selling helium balloons. The scene merged seamlessly with the one at the polling center. “They’ve all taken their money out of the country, that’s why they’re happy,” said a chemical engineer in shorts, wearing a rare red No badge.

Here the talk was of the incompetence and deceitfulness of the government. “I voted Yes because this whole thing is a lie,” a businessman who prints boxes and labels told me. “The creditors’ proposals and the governments’ were so close. So why are we going through this? Because they had no plan, that’s why.”

Others were more vehement. Ioannis, an independent financial consultant, showed me clips from the Yes campaign’s ads on his iPhone: Tsipras saying there would be no referendum, house speaker Zoe Konstantopoulou standing in front of the parliament with her fist raised. “The right way to negotiate,” he said, “is not in the left’s culture. This government will fall and others will take its place who can negotiate properly, not with bullying and blackmail. The only other left like the Greek left in the world is in North Korea. They’ve created an anti-European climate that we never had in Greece—their policy is to blame Europe for everything. And they’re sowing discord, like in the civil war. Whoever isn’t with them is a collaborator.”

Gyzi and Psychiko are a million miles apart—much further apart than they were before the crisis—and, in a way, the contrast between them is too easy. The No/Yes split had a clear class character, but it wasn’t just about that. It was also about two different narratives, two different ways of looking at the world, at Europe, at history, which sometimes coexist in the same person. “I’ve changed my mind five times since Monday,” a taxi driver who’s really an interior decorator told me two hours before the polls closed. “And I still don’t know which way I’m going to vote.”

Some people knew only that they couldn’t vote Yes, and either abstained or voted No at the last minute. Many on opposite sides wanted the same thing, the thing the great majority of Greeks have wanted from the start: a liveable future inside the eurozone. Their disagreement was about how best to get there. Friends argued over the risks, apportioned blame for the impasse in the negotiations, listed their disappointments with the Syriza government, tried to imagine day-after scenarios—expulsion or a velvet divorce from Europe, economic Armageddon or a slow recovery, the government’s falling or holding, a gap before something new evolves in which signs and monsters roam. Everyone agreed things were going to be bad either way; beyond that, everything seemed provisional, unknowable.

“They’ve put the gun to our temples and now they’re waiting for us to pull the trigger.”

It was, in the end, a decision made deep inside each person who had to face it, determined, you could say, by the subjective power of the established order—by how much the imaginary Europe in your head remained benevolent or neutral, how much the last five years had unraveled your reality. “Greece doesn’t exist any more—we’re lost,” a sad-eyed retired teacher told me, her hand on her husband’s knee. “The Greece inside us has collapsed.” To vote Yes meant having some faith in an international order where rational actors make decisions on the basis of both self-interest and collective responsibility. To vote No meant acknowledging the end of that comforting fantasy and making a leap of faith into the unknown—whether or not you could trust this government to see you through.

So now we’ve made the leap, and through that mysterious moment of democratic transformation, we’ve entered a different world. Maybe this No will turn out to be a Yes to a different Europe. Maybe that will come, but too late for Greece. Maybe this is the moment that hastens Europe’s unwinding—the defenestration of Prague, the shooting of Franz Ferdinand on the bridge in Sarajevo. History is moving much too fast to tell.