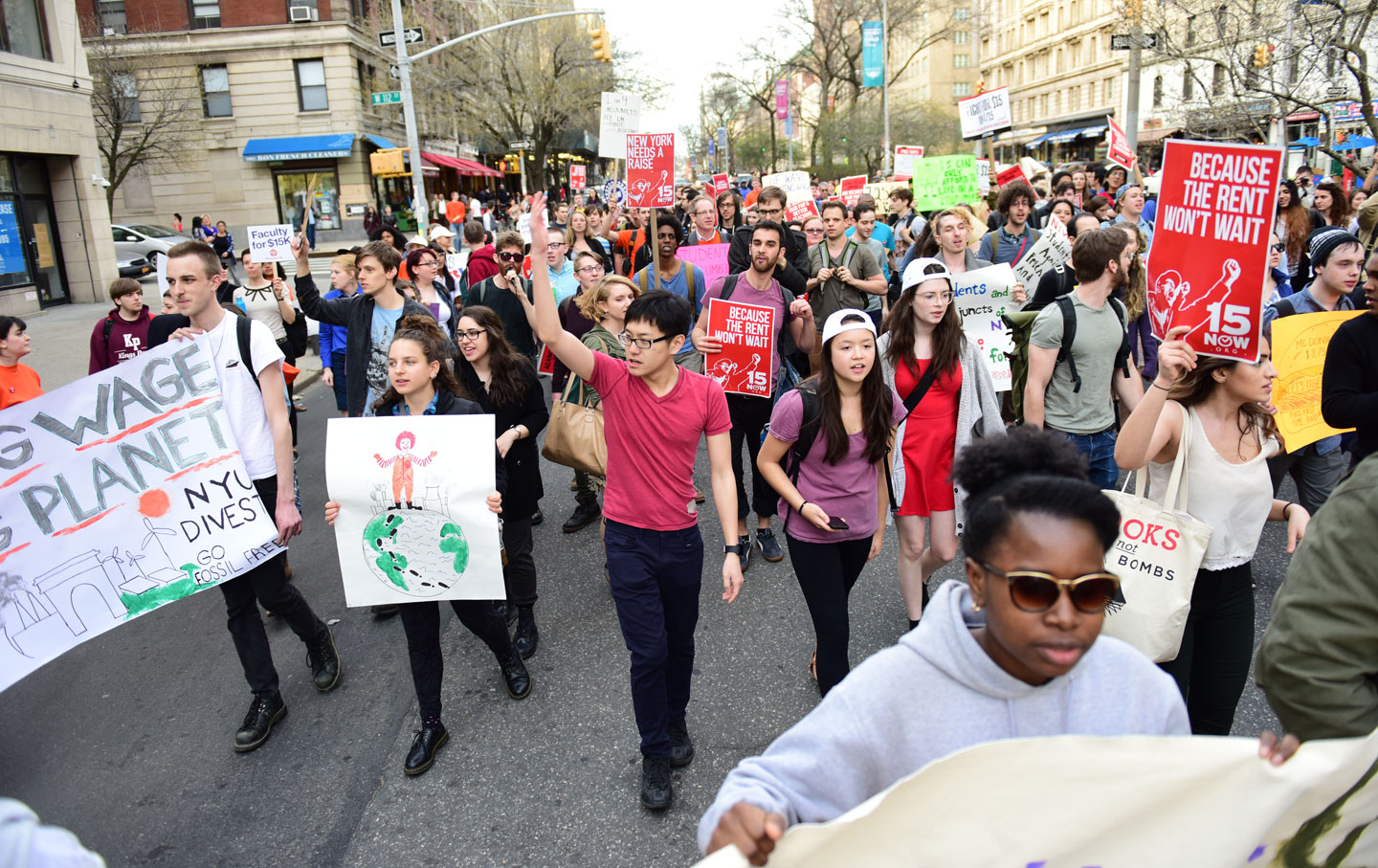 This semester, graduate students across the country will return to the same old routine of shuttling from the library to the lecture hall, hitting the archives in the afternoon and dozing off over a stack of half-graded papers by dusk. But they may be due for a reward worth a lot more than their tuition remission: validation of their work from the nation’s highest authority on labor rights.

Late last year, the National Labor Relations Board (NLRB) finally agreed to review the cases of Columbia University and New School graduate students who have been campaigning for years to form an official union on their campus. Their pending decision could overturn a precedent that has hamstrung labor organizing on private college and university campuses for over a decade.

Columbia graduate organizer Lindsey Dayton—part of the group organizing to join GWC-UAW 2110—is gratified they’ve pressed their case to the national level, while acknowledging that having their labor rights recognized shouldn’t have to be this hard. “We’re pretty confident that the board, as it stands now, will restore our right to collective bargaining,” she tells The Nation. “But we’re also very disappointed in Columbia’s response, which has been to hire superexpensive anti-labor lawyers to drag out this entire process and not to recognize our union.”

The ruling that the NLRB is set to revisit, for Brown University in 2004, centered on the question of whether graduate students who are employed by their university have the right to collectively bargain. The NLRB ruled in that case, by a 3-2 vote, that graduate students who work for their universities are not actually workers, and therefore don’t have collective-bargaining rights as defined under federal labor law. By defining graduate employees outside the scope of standard labor rights in the private sector, the NLRB largely foreclosed organizing at private campuses for the next 12 years. Graduate students pushing for collective-bargaining rights would have to seek voluntary recognition. Since unionization was thus placed at the administration’s discretion, only one private institution, New York University, has formed a full-fledged graduate union, and only after a long, relentless organizing campaign that later evolved into an arduous contract battle.

United Auto Workers (UAW), which also helped unionize the NYU students, worked with Columbia and New School students to cultivate support on campus, allying with myriad student, community, and labor groups. The UAW’s challenge to Brown has been rejected at the regional level—an expected procedural move to allow the precedent to be challenged at the national level. Now, many higher education labor advocates are hopeful the ruling will finally be overturned and set in motion another wave of organizing at private institutions to make up for ground lost in the years since Brown. During the intervening period, troubling trends of deskilling and marginalization of academic labor have intensified. Today, graduate workers are concerned not just about issues of wages, benefits, and job security, but the core question of what academic community means, in an increasingly unequal higher education landscape—including issues of academic freedom, racial and gender diversity, and the crushing cost of tuition.

In the final round of litigation, Columbia activists outlined the legal rationale for defining graduate employment under the rubric of other forms of educational labor. “An apprentice, by definition, is both a student and an employee,” they argued, as are medical interns and residents, despite not being certified doctors.

Additionally, despite the efforts by Columbia trustees to shrink the proposed collective bargaining structure, petitioners aim to include master’s students and undergraduates—considerably widening the scope and coverage of the contract beyond that of NYU’s (but in line with the structure established in previous unionization efforts). They argued, “the duties of Master’s and undergraduate students with teaching assignments are remarkably similar to those of Ph.D. students with Teaching Fellow appointments.” Besides, on a practical level, academic title often doesn’t factor into the experience of students, who “cannot tell whether the student providing the assistance is enrolled in a doctoral program.”

Defining the bargaining unit broadly, from freshmen to post-docs, reflects an organic organizing process. “We want to really build a strong union on the ground…[research assistants] do some of the most important work at Columbia…in some ways they’re treated like workers in more traditional ways than the [teaching assistants] are,” Dayton says, so they deserved to be included. Undergraduates also perform similar teaching-assistant duties, so deliberately excluding them would only undermine the integrity of their bargaining process, particularly when undergraduate activists have strongly supported the graduate labor campaign as allies. Undergraduates “recognize how important we are to their education…but I think they also recognize that they are workers too.” Many student workers, she adds, such as work-study participants, “are performing a huge amount of work that’s being done and Columbia is finding ways to cut corners,” which erodes working conditions for both union and non-union workers, and could create yet another channel to exploitation parallel to the growing dependence on underpaid graduate workers.

“It’s really about having a different vision for academia.”

As their organizing has evolved organically across campus, activists have become increasingly willing to organize across traditional divisions in the academic workforce, recognizing how the roles of student and learner intersect and evolve. And building solidarity with support staff on campus has turned many students from academics-in-training to apprentices in the craft of labor organizing.

The union fight has inspired other organizing efforts. Graduate worker activists have helped encourage the recent unionization of contingent faculty at Columbia’s Barnard College, Dayton says, along with Fight for 15 protests on campus for low-wage undergraduate workers. Whatever the NLRB rules, the battleground has moved beyond a union contract to something more like a social contract on campus.

“Having a union, and knowing that we are a union, has made all the difference for how we think about our life here,” Dayton says. Beyond the issue of unionizing graduate and undergraduate workers, “it’s really about having a different vision for academia and building power on the ground so that the people who run the university and contribute to its mission, to educate and to perform research. They’re the ones who are determining what the university looks like, and what its work looks like.”