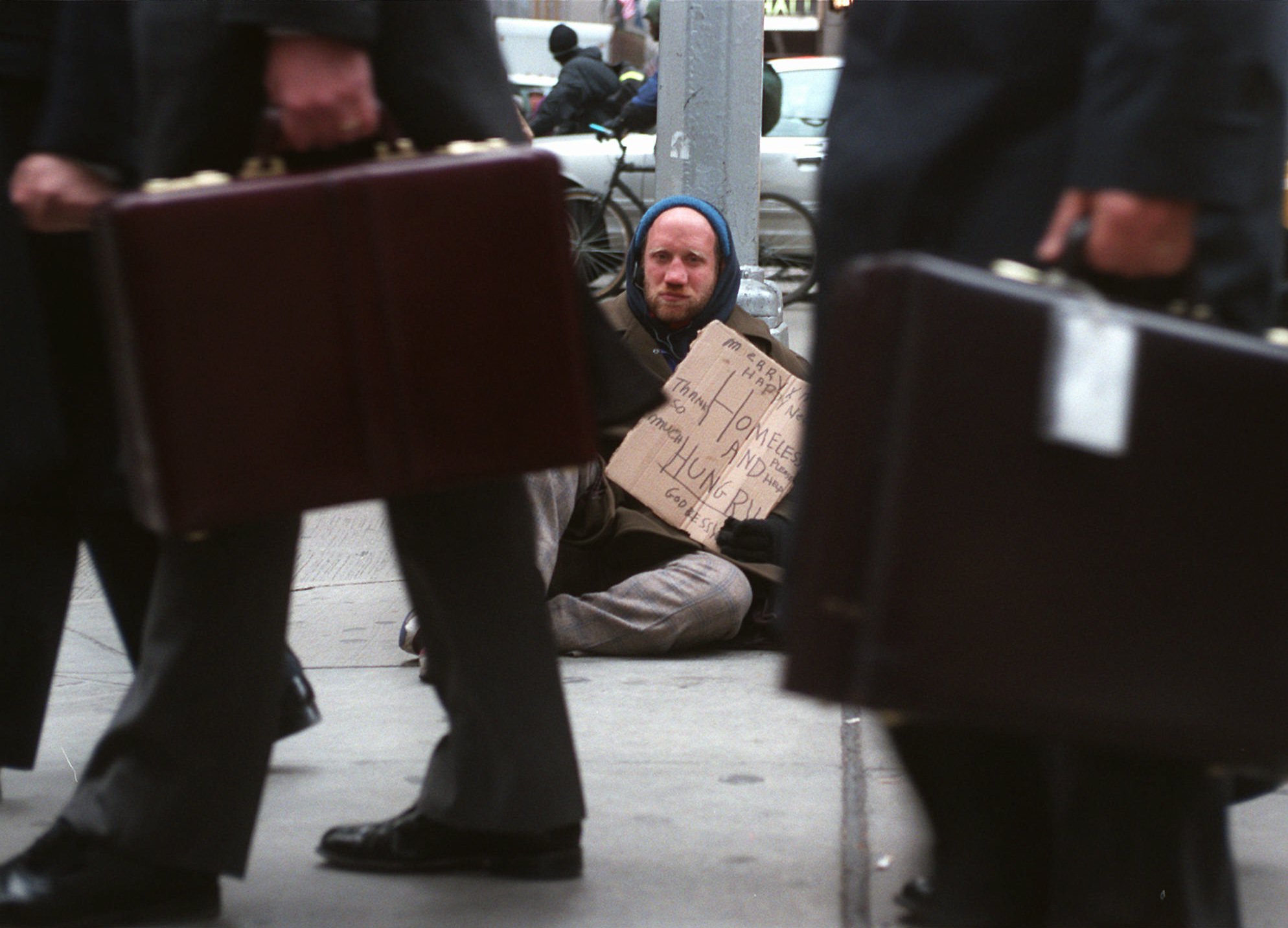 Here is how little the Republicans care about the increasingly harrowing situation of the poor: they can’t even be roused to blame President Obama for it—because to do so they’d have to acknowledge that it matters.

The news recently has been full of stories of mounting desperation in America. In The New Yorker, Ian Frazier reported that there are now more homeless people in New York City than at any time since the concept of “modern homelessness” arose in the 1970s. Nationwide, new Education Department data reveal that the number of homeless schoolchildren has hit a record high of 1.2 million. Meanwhile, on November 1, the benefits of every food stamp recipient in the country were cut by an average of 7 percent and already overburdened food banks prepared to ration distributions or turn people away. “It is too bad we have come to this in our country,” the head of the Ohio Association of Foodbanks told the Cleveland Plain Dealer.

In a minimally functioning political system, there would be a debate about potential solutions to these unfolding disasters. After all, conservatives once claimed they had superior answers to the problems of poverty. Richard Nixon lambasted welfare for encouraging family breakups and penalizing work, but he sought to replace it with a guaranteed minimum income. Poverty obsessed 1996 vice presidential candidate Jack Kemp, who used to call himself a “bleeding-heart conservative.” George W. Bush dubbed himself a “compassionate conservative” and made the channeling of public funds to religious charities a signature issue. There was much to criticize in conservative approaches to poverty, but they at least emerged from a modest political consensus that the suffering of the poor was real and that something should be done about it.

Now, instead, we see on the right a combination of poverty denialism and outright contempt. Fox News constantly regales its viewers with tales of the lavish lifestyles of aid recipients. Between food stamps and tax credits, Fox’s Charles Payne argued in March, “it gets a little comfortable to be in poverty.” A recurring Fox segment called “Entitlement Nation” begins with an animated grasping hand smashing through a map of the United States. Recently, it featured a libertarian think-tanker criticizing free school lunches on the grounds that poor kids suffer from “obesity, and not the fact that they’re not getting enough calories.”

Ideas about the indolence of the poor pervade our politics. Arguing against accepting federal funding to expand Medicaid access in his state, Louisiana Governor Bobby Jindal wrote, “Soon there will be more people riding in the cart than people pulling the cart.” Two congressmen—Tennessee’s Stephen Fincher and North Dakota’s Kevin Cramer—have cited II Thessalonians 3:10 in support of food stamp cuts: “For even when we were with you, we gave you this command: Anyone unwilling to work should not eat.”

“At least before, they would carry on the pretense of offering a solution to alleviate poverty,” says Congressman Keith Ellison. “Now they don’t seem to be concerned about it at all.”

In some ways, all this is familiar. When Texas Republican Louie Gohmert complains that his constituents can scarcely buy groceries without getting stuck in line behind people using their food stamp cards to indulge in crab legs, he echoes Ronald Reagan describing a “strapping young buck” using food stamps to buy a “T-bone steak.” It hardly excuses Reagan, though, to point out that when he was demagoguing about “welfare queens,” welfare existed. In the wake of welfare reform and the financial crisis, the idea that the safety net is becoming a hammock, as Paul Ryan put it, is more preposterous than ever. Among nondisabled parents, for example, the majority of food stamp recipients are either working or recently out of work. Before the cuts, they received enough to spend less than $1.50 per meal. These people are not living large.

It seems that to be a contemporary Republican, one must simultaneously believe two things: that Obama has immiserated the country and driven unemployment to intolerable levels, and that the poor have it easy and there are plenty of jobs out there for the taking. When the tension between these two beliefs gets to be too great, Republicans will usually tilt toward the latter.

This has left some proponents of a softer, more charitable conservatism despondent. I asked Doug Wead, a Pentecostal minister and former adviser to both Bushes who is widely credited with coining the phrase “compassionate conservatism,” whether he knows of any Republican politicians who are serious about fighting poverty. He did not. “This discussion isn’t even going on in the Republican Party right now, and that’s heartbreaking,” he says.

If there’s a bright spot here, it is that Republican extremism could create a pro-poor reaction, much like the backlash that has turned reproductive rights into a winning issue for Democrats. For decades, Democrats were on the defensive about welfare—Bill Clinton’s signature achievement was “ending welfare as we know it.” Precisely because he did so, though, he neutralized a lot of broad resentment toward social programs. Americans have always hated the idea of people getting something for nothing, but in a country where the ranks of the working poor are swelling and food stamps subsidize the low wages paid by behemoths like Walmart and McDonald’s, the notion of the indigent as coddled idlers has little currency outside the right-wing bubble. Polls, for example, consistently show majority opposition to cuts in food stamps. In such an environment, the war against the poor could be used against the GOP as effectively as the war on women was, at least if the Democrats are prepared to defend them.

Earlier this week, Greg Kaufmann wrote a blog post titled "How to Cut Poverty in Half in Ten Years."